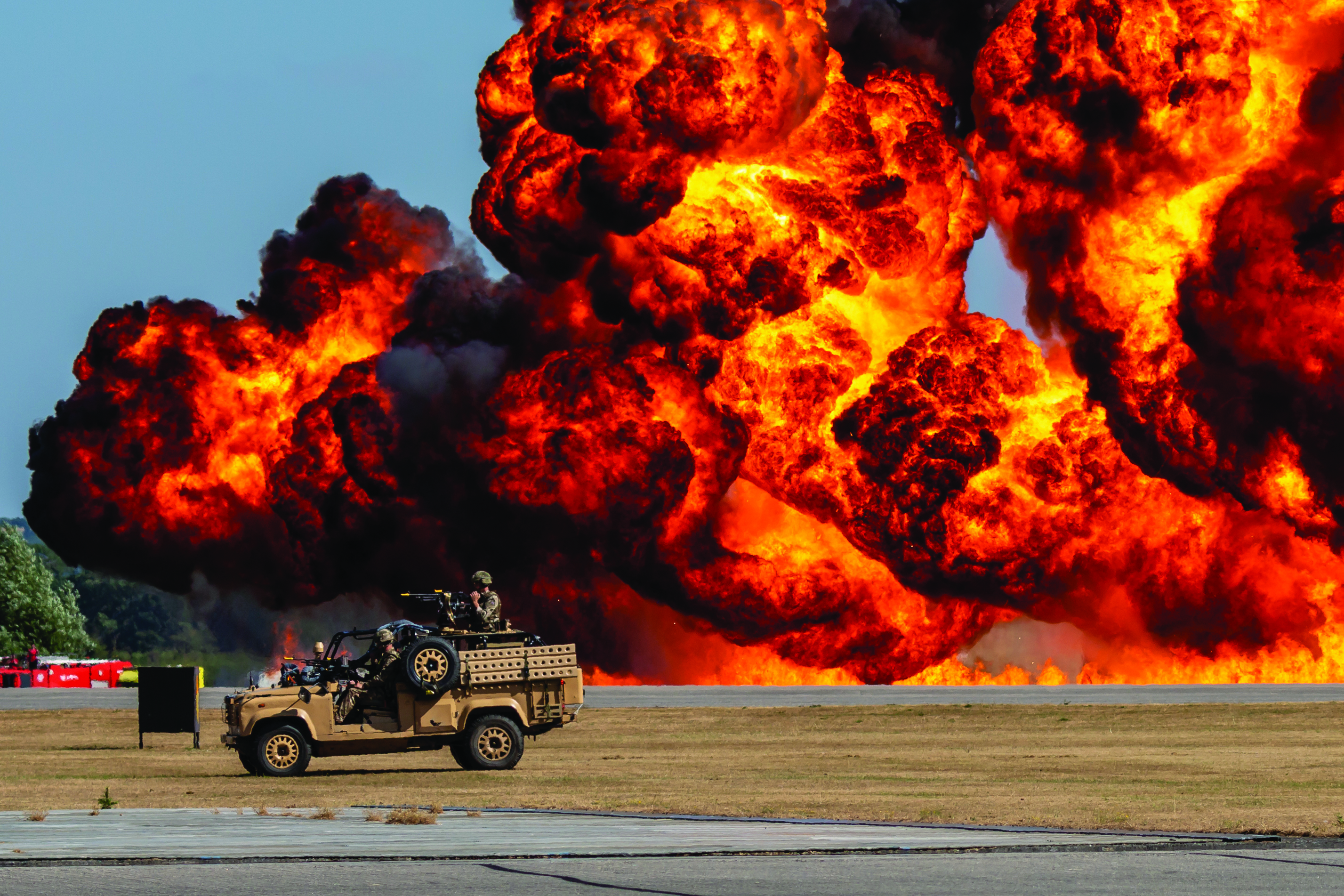 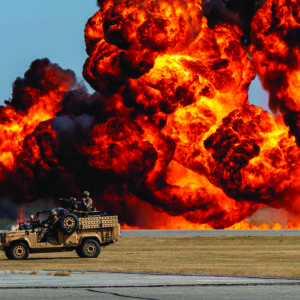 About 7 p.m. on Feb. 25, Leicester, England, residents heard a low booming sound and felt their residences shaking like an earthquake.1 Startled, they went outside to discover a three-story building had collapsed like a pancake following a sudden blast. Gas and flames were streaming out of the building. Five people died—one working downstairs in the Polish grocery store and four people in the flat upstairs.2

Contrast that incident with the loud boom heard a month later in New York City, New York (USA). A manhole cover blew open, followed by a second manhole explosion down the block in downtown Manhattan.3 While there were no serious injuries in this case, these two incidents do have something in common. What you might wonder? They are both handled on Fire Priority Dispatch System™ (FPDS®) Protocol 57: Explosion. With the release of FPDS v7.0 coming up, this CDE will focus on this new version of the protocol.

An explosion is defined as an incident involving the report of an explosion, seen or heard. Protocol 57 covers explosions in buildings, vehicles, manholes, non-dwelling buildings or structures, open areas, mobile homes, portable offices, and house trailers. Emergency Fire Dispatchers must know the definitions included in the Additional Information section of Protocol 57 in order to decide which Determinant Code applies to each situation that comes up.

Something EFDs need to take into consideration is whether what has exploded is a HIGH LIFE HAZARD. It’s defined as “any location that poses multiple life threats due to difficulty exiting or lack of mobility of the inhabitants.” Examples include churches, hospitals, nursing homes, large apartment complexes, and schools. Buildings that meet the HIGH LIFE HAZARD definition receive the highest Determinant Code possible, 57-D-1.

New on Protocol 57 is KQ 1b, “What type of vehicle is involved?” Protocol 57 includes definitions for two types of vehicles. The first is COMMERCIAL vehicle, which is defined as “Any vehicle that transports products related to business or trade. The products can be dangerous or hazardous.” Two examples given for COMMERCIAL vehicle are tankers and tractor-trailers (semis). The other type of vehicle defined for EFDs is LARGE FUEL/FIRE LOAD vehicle: “Vehicles, usually large in size, that can carry large amounts of combustible materials. These may pose additional threats during firefighting operations and require additional resources.” Examples listed are campers, motor homes, and buses.

If the explosion involves a manhole, NON-DWELLING buildings or structures, open areas, mobile homes, portable offices, or house trailers, the EFD will move to KQ 2 “Is anything burning?” after discovering what has exploded. Following KQ 2, the EFD will dispatch responders for all dispatch codes. This allows the EFD to gather all safety information before dispatching and also allows responders to arrive as quickly as possible.

Protocol 57 has DELTA, CHARLIE and BRAVO Determinant Codes. Two of the three CHARLIE codes are new in version 7; “Other vehicle explosion” was previously a BRAVO-level code. Any buildings/structures, including NON-DWELLINGS and mobile homes, house trailers, and portable offices, receive a DELTA-level code. A COMMERCIAL vehicle receives a 57-D-9 and a LARGE FUEL/FIRE LOAD vehicle receives a 57-D-10. Other vehicle explosions are now dispatched as a 57-C-1. Open areas receive a 57-C-2 while a manhole explosion is coded as a 57-C-3.

Other explosions receive a 57-B-1 while Rule 3 instructs EFDs to code audible explosions without visible damage as 57-B-2 “Unknown situation (investigation).”

After dispatching, the EFD will return to questioning. After asking KQ 3 “Is anyone trapped?” and gathering additional information by asking KQ 3a and 3b, if applicable, the EFD will go to Post-Dispatch Instructions and then Dispatch Life Support Links if the caller is trapped or in danger. The EFD will tell the caller not to touch or pick up anything, not to try to put the fire out (if applicable), and not to use, turn on, or turn off any additional electrical devices. Two additional PDIs have been added in version 7. PDI-e tells the caller, “If it’s safe to do so, leave the building, close the doors behind you, and remain outside.” For a COMMERCIAL/INDUSTRIAL/Multi-dwelling situation, the EFD will offer PDI-f, which instructs the caller not to use the elevator. Also, at this stage the EFD will advise the caller of potential hazards and let responders know of potential hazards and any information gathered regarding the number of people trapped or in danger and their location.

Mike Thompson, Priority Dispatch System™ Program Administrator—Fire and Medical, said it is statistically safer for the caller to leave a building after an explosion.

After providing PDIs, the EFD will go to the appropriate DLS Link. Building/Structure Evacuation (1st party) (B-1) is new to version 7 of the FPDS. Other links include Caller Danger – Not Trapped (B-3), Trapped in Confined Space/Structure Collapse (1st party) (D-2), Stay on the Line (X-2), and Urgent Disconnect (X-3).

If the answer to Key Question 3 is no, the EFD will continue with Key Questioning. The EFD will ask about the extent of the damage, if the caller heard a bursting or hissing sound, and whether anyone on scene has complained of an unusual odor. KQ 7 asks “Is anyone injured?” If the answer is yes, the EFD will ask KQ 7a “How many?” EFDs will need to see if the number of people injured meets their agency’s definition of MASS CASUALTY INCIDENT (MCI). An MCI is a “Medical/Trauma situation where the combination of multiple patients and injuries exceeds the immediate capability of the EMS system.” Within the definition, there is a space for agencies to include their definitions for Level 1, Level 2, and Level 3.

Explosions of a terrorist nature

Mass casualty incidents are on the rise. In 2016, bombing/explosions accounted for 54 percent of attack types used in acts of terrorism worldwide.4

One such example is an explosion on one of London’s (England) Underground trains in September 2017 during the morning rush hour. A single improvised explosive device exploded at the Parsons Green Tube station. At least 29 people were injured.5

Because explosions are sometimes used for nefarious purposes, Rule 1 on Protocol 57 reminds EFDs that all explosions are considered crime scenes and callers should be advised not to disturb anything.

Thompson said Protocol 57 was originally intended to deal with explosions not of a terrorist nature. “Now deliberate terrorist attacks that have changed that,” he said. 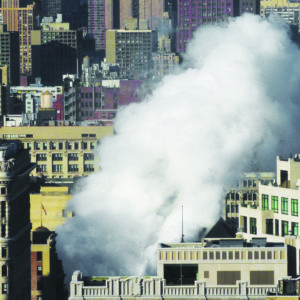 What about those explosions you might not be too familiar with? Take, for instance, manhole cover explosions. Did you know that manhole explosions are frequent in New York City? There are, on average, six such events a day.6 Back in February 2015, Consolidated Edison, the city’s utility company, reported 600 incidents in one week involving fire, smoke, and explosions taking place in manholes.

The electrical system in New York City is the oldest in the U.S. and some underground wires are 100 years old. The perfect storm of road salt (used to melt snow and ice buildup) seeping into manholes and wearing away insulation that covers the underground wires, plus the city’s rats gnawing away at wires, can lead to sparks as the insulation heats. That creates a buildup of pressure that can spur the loud boom and send the manhole cover flying into the air. It is possible for electrical fires to start also.

For more than 10 years, Con Edison has been working to replace old manhole covers with ones that do a better job of ventilation. The city has a whopping 246,000 manhole covers, making the job no small task.

You might be familiar with the Medical Priority Dispatch System™ (MPDS®) and the Police Priority Dispatch System™ (PPDS®) in addition to the FPDS. The MPDS handles explosions on Protocol 7: Burns (Scalds)/Explosion (Blast), and the PPDS handles them on Protocol 117: Explosion. Thompson explained that agencies using two or all three of the protocol systems should review all three protocols to understand what they do and don’t do. The MPDS is patient centric while the FPDS and the PPDS are safety centric.

“They all do something just a little bit different,” Thompson said.

Then agencies should let their Dispatch Review Committee (DRC) decide when emergency dispatchers in their agency should use each of the protocols.

“From an overall point of view, fire does the best job,” he said. “It takes into account that someone saw an explosion and that’s all they know.”