If you like variety and adventure in emergency dispatch, Valdez, Alaska (USA), just might be the place for you. Keep in mind that you’ll have to wait for openings at a communication center with little to no turnover though. 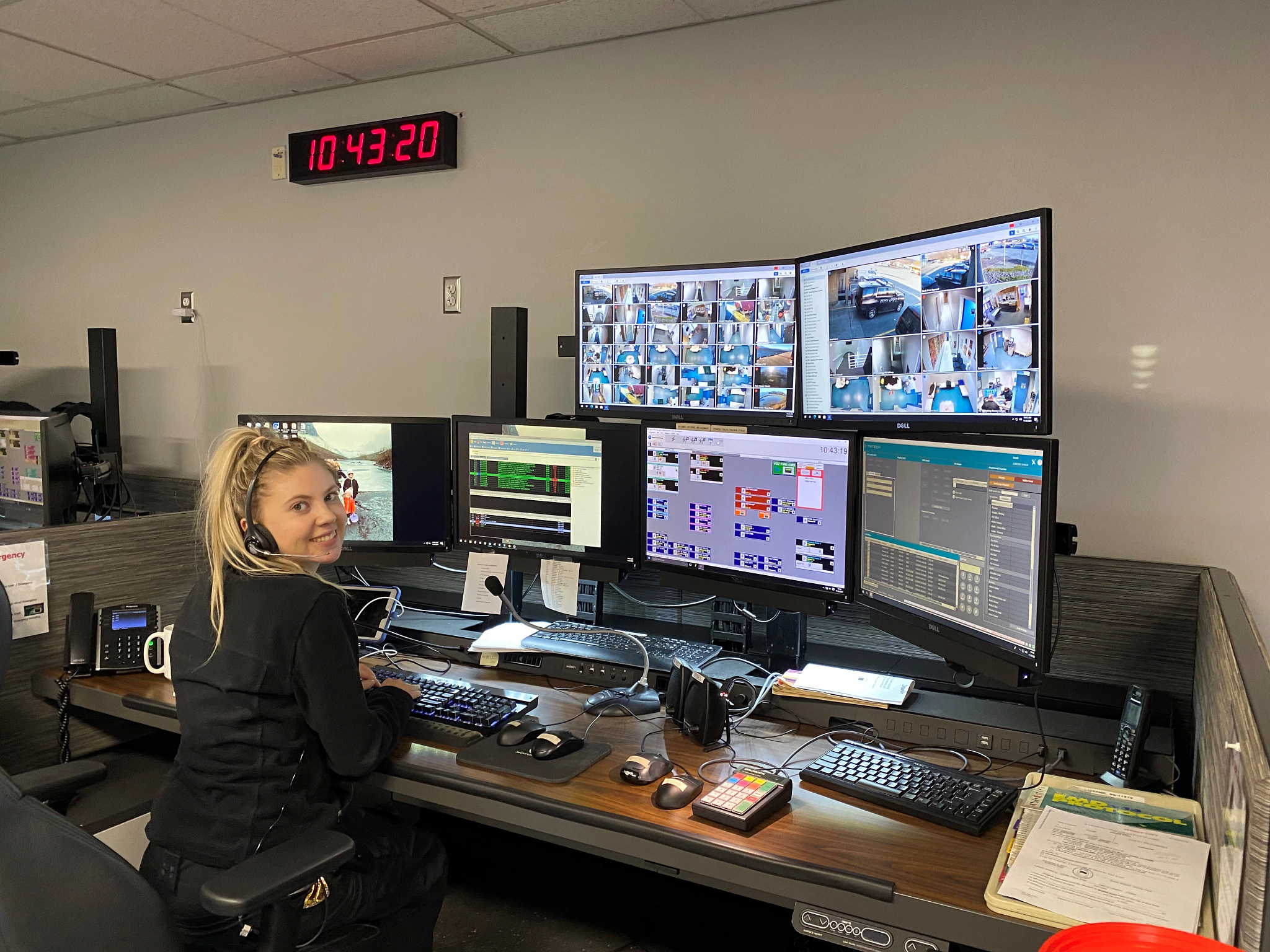 She is the sole EMD on duty during that shift but can call for backup from PSAP Supervisor Lorrie Mott or a co-worker scheduled for a shift on the first floor at the Valdez Police Department.

The many hats of dispatch also include record clerk between answering calls, dispatching response, alerting animal control officers to investigate reports of a brown or black bear tromping through a neighborhood or campground, and contacting search and rescue to locate someone last seen, for example, driving a snowmobile into the great beyond for adventure.

Winn likes the variety. “There’s a good feeling about helping the community.”

The variety doesn’t end in the emergency dispatch center. One week off and she’s back in the same building—this time on the first floor exchanging the first set of hats for another.

She works 12-hour shifts as the corrections officer and acts as backup for the EMD on the second floor. The 13-bed jail is divided into four rooms—including a four-bed holding tank. Generally speaking, an average of one to three people are booked into jail at any one time.

The corrections officers do meal prep and serving, from shopping for breakfast, lunch, and supper to cooking and handing out the food trays. They clean, manage visiting hours, transport the prisoners to the courthouse for hearings, and conduct the electronic monitoring process.

Electronic monitoring duties take up a lot of the time on shift, Mott said. They set up new monitors, troubleshoot faulty equipment, call defendants in for pre-trial conferences, and work with police officers when defendants violate conditions and, consequently, face charges for the violation.

One week off, and Winn’s back in dispatch. It’s the same for all staff.

The rotation takes someone as unique as the Valdez environment. “It’s not for everyone, and people working here do have their preferences,” Winn said.

Mastering both jobs is an expected part of the position, said Mott, who manages both dispatch and jail custodial services. The eight EMDs and the administrative assistant are hired knowing full well the responsibilities, and they pitch in as needed.

Mott hired three new members in 2019 to fill vacancies and has been fully staffed since. The two-role niche suits certain people. Winn said it takes two types of job skills and accepting the pros and cons of both positions.

Dispatch is multi-tasking, responding to events in the moment. Being a corrections officer, she said, takes patience and knowing the right contact for a variety of issues, such as, but not limited to, behavior and substance abuse or technical glitches in electronic monitoring.

“We work so well as a team,” said Winn, referring to the relationships established between dispatch and field responders. “We understand what the other does.”

The cons come from working in a small city. Valdez’s population is about 3,800 permanent residents. The city radiates 19 miles from the central civic and business district. The closest (small) town is 100 miles away, with the City of Anchorage over 300 miles away. You know the people involved or, at least, know someone who knows. A traffic accident that claimed the lives of a mother and her child on Richardson Highway, the single road leading into and out of Valdez, left an impact on the entire city.

“When things happen like this, it affects everyone,” Winn said. “The family. Friends. The entire community. Their deaths hit the community really hard. I still think about it.”

As a corrections officer, it’s never comfortable booking a neighbor, a former high school buddy, or a family member into jail. Confidentiality is stressed.

Mott established the dispatch/jail partnership in 2005/2006, as mandated by the Valdez Police Department chief. The budget goes farther when blending resources and combining positions simplifies the hiring process. One position, not two.

Cross-training is the hard part, and the training takes a good year to complete. In addition to EMD certification, Mott instructs a five-week dispatch education class and coordinates a four- to six-month one-on-one training program. To fulfill the corrections portion of the job, each person must attend a three-week Correctional Academy course offered by Alaska Department of Corrections. The Valdez Jail is a contract jail for the State of Alaska. The EMDs are Taser certified for prisoner transport, pepper spray certified, and firearms qualified. They are trained in defensive tactics as well.

Talk about hats, Mott changes them repeatedly. She is also responsible for CAD administration as well as other systems throughout the department and is a certified Drone Pilot, as are several of the police officers. She hired on in 1995, left two years later, and returned in 2005. The center has an annual volume of 400 to 500 fire/EMS and law enforcement emergency calls and another 5,500 to 6,000 calls for assistance. They use the Medical Priority Dispatch System™ (MPDS®). The types of medical calls they receive are fairly common—seizures, cardiac arrest, falls, and sick person.

Traffic accidents often require fire/EMS and police response. The 368-mile Richardson Highway, started as a pack trail by prospectors lured to the Klondike gold rush, is incredibly scenic, offering views of mountains, glaciers, rivers, and aurora borealis (northern lights). Danger comes in darkness and the unexpected. Black ice, snow fall, and long distances for medical services combine to make this road treacherous in winter. Avalanches along the highway can close the road. People cannot get in or out of Valdez.

What crosses the road can easily distract a driver’s attention. Drivers see brown bears, black bears, coyotes, moose, and even the occasional sea lion crossing the highway looking for a meal (watch the video on the Valdez Police Facebook page at https://www.facebook.com/ValdezPolice).

The views—and the wilderness they represent—draw thousands of tourists during the summer. Mountain climbing, hiking, bicycling, salmon fishing, camping, backcountry skiing—you name it. Valdez is the ultimate mecca of outdoor enthusiasts. On top of everything else unique about Valdez, there are no stoplights in the town. A blinking light on the highway alerts drivers to the airport turnoff. That’s it.

You don’t have to ask twice why Mott and Winn stay. Valdez might be considered the end of the line—marker “zero” on the Richardson Highway—but it’s also a tough line to leave once there.

Winn has lived in Valdez since grade school. Her family is there. She lives a block from the school her children attend. She enjoys her job—the challenges and the rewards. There’s a certain sense of security when no one stays a stranger.

Mott opens her door and steps out back to mountain scapes. She’s outdoor through and through. Boating. Fishing. Hiking. Black bears can be a nuisance, but the brown bear is the one to watch out for. Winter might seem to last forever, yet there’s a lot to be admired about snowcapped peaks and dressing in piles of clothing for a winter hike.