There's A Tree On My Roof

Dedication to helping others kept Lisa Sutton on the job even after a tree crashed down on the roof of her home.

That is what happened August 10 when a powerful straight-line windstorm—called a derecho—pushed through eastern Iowa felling trees, mowing crops, and causing more havoc than the tornadoes they’re more used to in the Great Plains. 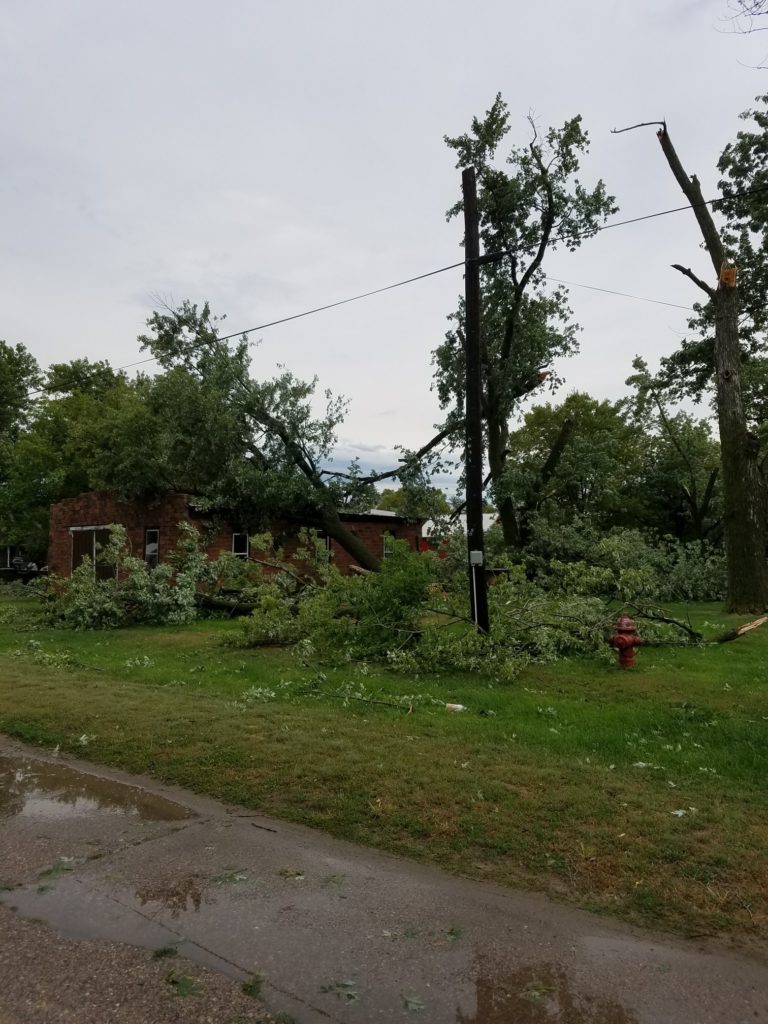 “All of a sudden it was there, and the trees were coming down,” Sutton said.

Sutton did not see the trees uprooted until driving home later that day, nor did she hear the gusts screeching in some places up to 140 miles per hour. Sutton was answering 911 calls for Muscatine County Joint Communications (MUSCOM) (Iowa, USA), which is two floors underneath the county public safety building. The National Weather Service (NWS) issued a severe thunderstorm warning, rather than a tornado warning, since “by their definition derechos are wind events produced by severe thunderstorms.”1 Sirens were activated and within five minutes, the phones started ringing off the hook.

Cameras mounted outside showed the torrential wind and rain. They couldn’t see the extent but calls coming in gave a good indication of the storm’s force. Projectile debris. Trees down, power lines down catching trees on fire, and trees and power lines making travel hazardous if not impossible.

“Every fire department was out and same for police,” said Muscatine 911 Director Christopher Jasper. “At one point we had 67 calls holding—unheard of for us in a county of 44,000.”

Calls were prioritized. The two EMDs on shift and Jasper took down information and told callers they would get help to them as soon as they could.

Sutton’s call from home came through on her cell. Jasper figured something was wrong from the gasps she was making. Jasper asked what was happening, and she started showing the photos her husband was sending. The big tree in the front yard was no longer standing. It was lying on its side on their roof. Jasper advised that she might want to go home, which is just north of the center.

Sutton figured she would stay on the phones and radio. After all, the tree was on her roof but not through the roof. Her husband and their son were at home and neither was hurt. The communication center was the place where she could do the most good.

“These people calling needed me,” she said.

EMD Chelli Martin came into the center a few hours earlier to work her shift. The sky overhead was sunny, although the sky approaching from the west was dark and ominous-looking.

“When it first hit, we had no idea what was going on,” she said. “It was scary. West Liberty was getting hit hard. We could tell from the calls. Power lines ripped off. Wires sparking. People worried about fires.”

A derecho is different than a tornado, Jasper said, and they have had their share of tornadoes. The derecho gave very little warning and had the powerful straight-line winds of a tremendous forward speed; it is not uncommon for a derecho to move at 60 to 70 miles per hour.2 The derecho in August was a huge storm—700 miles in length and reaching 30 to 50 miles wide.

Jasper, Sutton, and Martin combined have been in emergency communications for over 30 years, and the derecho was nothing like anything they had ever experienced. They took calls from about 1:50 that afternoon until about 10:30 that night. Jasper, a West Liberty volunteer firefighter, said driving through the county later brought home the devastation.

“Shingles and siding torn off houses,” he said. “Caved-in silos. Trees everywhere on the ground. Almost seemed like a tree wasn’t left standing.”

Power was out in some places for four and five days. City and county crews worked round the clock cleaning debris and cutting downed trees into manageable pieces for moving.

“You can train until you’re blue in the face, but nothing prepares you for this,” Martin said. “I was happy to get home that night.”

Martin was also relieved that a big tree in their yard had been cut down a month earlier. Probably saved them from replacing the roof.