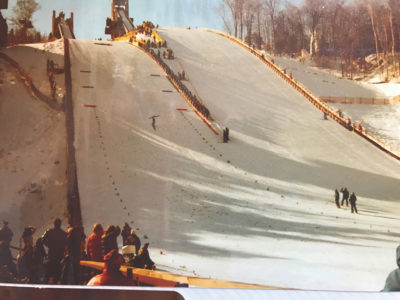 Edward Sim and Kevin Moore took six-week leaves of absence to work the phones and radios for the Winter Olympics held at Lake Placid, New York, but it was a thrill-of-a-lifetime opportunity even if they weren’t bringing home a medal.

As certified paramedics, Sim and Moore had the medical background required plus upstanding reputations at dispatch. They knew how to answer calls, take and relay accurate information, and dispatch ambulances. They were Johnny-on-the spot for dealing with emergencies and their enthusiasm was undeniable.

“We were excited to do the job,” said Sim, who dedicated his career to public service in Colonie. “It was something bringing the world to our little community. It was a big thing for the whole state of New York. We would be a part of history.”

The job also had major benefits.

Sim was in the medal-round men’s ice hockey game when the United States national team, made up of amateur and collegiate players, defeated the heavily favored Soviet Union national team. The “surreal” atmosphere inside the Olympic ice arena is a highlight Sim will always treasure, along with the ski jumping, speed skating, a fiancé who waited until after the games to tie the knot, and enviable scheduling. He was home on weekends during the three-week orientation, and during the games, he worked a predictable eight hours on and 24 hours off rotation.

“It’s ironic that this will be the first time in three years that I’ll actually get a weekend off,” he told Heins.

The two dispatchers were selected from eight civilian dispatchers who applied for the positions, and with two others chosen from a neighboring communication center, they were responsible for monitoring emergency medical calls for Lake Placid Village and the outlying areas of Keene Valley, Saranac Lake, and Elizabethtown.

Orientation familiarized the volunteer dispatchers and volunteer EMTs with the area and equipment. They supplemented the 12 ambulance squads normally servicing the area.

Sim said their Olympic calltaking and dispatching mirrored the jobs they performed for the Colonie Police Department.

“The main thing they’re concerned with is cutting down the response time for the calls,” Sim said. “It is anticipated that the number of ambulance calls will at least triple during the Olympics (two weeks). Usually, Lake Placid averages 50 ambulance calls during the entire month of February.”

Sim and Moore were each paid $1,800, with the state picking up the tab for housing, meals, and transportation. They stayed at Camp Adirondack, a former prison, with state police who were assigned to Olympic detail.

Colonie’s signal system also went to the Olympics. At the time, they used 11 different codes or signals varying from non-emergency to emergency, each indicating the nature of the call to the responding ambulance crews.

Although Sim retired as a Colonie Police lieutenant in 2004, he stays active in Colonie public service. He’s been a member of the Colonie Volunteer Fire Co. for 42 years, serving as an ambulance EMT, chief, president, and treasurer. He was named Firefighter of the Year in 1987.

Moore retired to the state of Florida.

The Colonie Police Department communications division is a longtime user of the Medical Priority Dispatch System (MPDS), dating back to MPDS v10.0.