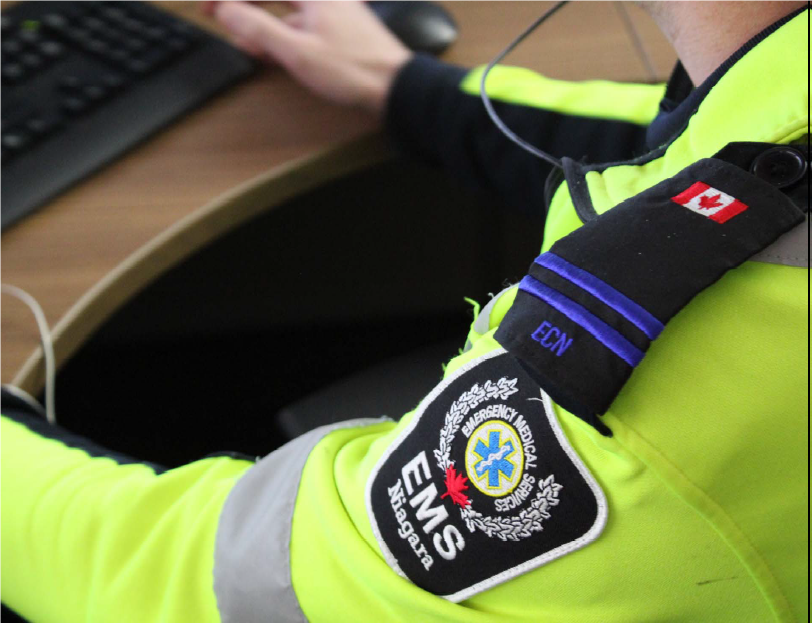 Niagara Regional 911 didn’t wait for the future to catch up. Rather, the center in Ontario, Canada, took giant steps ahead to navigate growth projections and increased demands upon emergency services.

“It’s really been lovely,” said Lutz-Graul, a paramedic who in 2009 started as training supervisor at Niagara Regional 911. “We’ve learned that helping the patient is about the right provider or service, and not the transport.”

The changes in systems transformation rely on community collaboration, integrating medical and behavioral health professionals, enhancing existing tools in the communication center, and public awareness. Niagara EMS, which covers the highest population within the Ontario province, phased in each stepped backed by research and outreach.

Prologue to Niagara’s long-range planning and implementation was a consultant’s projection that call volume would climb substantially during the 10 years 2017–2027. The current 65,000 calls to 911 would reach 110,000 calls each year, with a spike in calls favoring people aged 65 and older and, also, if current trends hold, calls from the age group 18 to 34.

A doubling of calls received without a matching doubling of resources, as anticipated, would create an imbalance and decrease in emergency services provided to the public. It was not so much a question of disparity based on lack or availability of health insurance. Canada’s health system is publicly funded at both the federal and provincial levels, explained Lutz-Graul.

“When resource demand doesn’t mirror response demand, that’s a problem,” Lutz-Graul said. “The question became how can we do this work responsibly while sustaining the same high-quality care for our patients and protecting the welfare of our responders.”

In addition, the provincial government document “EMS Vision: Ontario 2050” set forth a plan that mirrors the U.S. EMS Agenda 2050 commitment to use evidence and best practices and focus on outcomes determined by the community and the patients, including outcome measures.

Niagara EMS was simply positioning to beat the future.

The road to transformation followed a "ready, aim, shoot" approach, Lutz-Graul said, a trial and error process supported with a plan to learn from what they had missed or overlooked and feedback. They queried existing patients, finding that alternative care was acceptable in non-urgent situations. They produced a video and distributed it to doctor’s offices and clinics. There were no random shots in the dark.

The Medical Priority Dispatch System™ (MPDS®) does a “great job in giving us the assurance and evidence of what we need for our callers,” Lutz-Graul said. It was now a matter of looking at outcomes.

What followed was an intensive scrutiny of patient data and categorizing both the types of calls received and how the calls were coded for response. They recruited the assistance of academics from Brock University, McMaster University, both in Ontario, Canada, and the University of Sheffield (U.K.). The collaborative research going back five years not only demonstrated the value of Niagara’s EMS patient data in identifying at-risk populations but, also, the ability to create novel, targeted approaches to public health intervention.

Data highlighted mental health emergencies going up across all demographics, an increase in falls, and the prevalence of repeated callers. A surprising phenomenon was the high rate of low-acuity calls from patients 65 and older who were experiencing higher-acuity medical conditions. This finding was opposite for callers between 18 and 34. Their calls often reported higher-acuity medical conditions than later determined.

On the road and in the center

The next phase was deciding who or what would best serve patients prior to the arrival of response and when transport alone did not provide longer-term interventions. They stepped out of the EMS silo and contacted social service, medical, and mental health specialists to support the initiatives.

In July 2018, Niagara EMS rolled out Mobile Integrated Health (MIH) teams, a coordinated approach of health care that pairs paramedics with clinical and non-clinical resources donated by other community providers. Paramedics with advanced training can assess and treat the lower-acuity patients on scene, saving them a trip to the emergency department. Depending on the caller’s needs, mental, behavioral, and physical therapy specialists, for example, accompany the paramedics. Patients requiring mental health and behavioral interventions or patients with drug- and alcohol-related issues can be referred to programs that assist in prevention and recovery. A physical therapist can evaluate patients and tailor programs to improve balance and coordination. It’s up to the patient to accept or decline.

The MIH teams not only assist the patient who wants to avoid the emergency room, but the program also lets patients acknowledge medical issues earlier and reduces the risk of complications. The option lends to lower health care costs by treating the patient in the clinically correct setting.

As Lutz-Graul explained, MIH teams enhance the existing health care systems and fill the resource gaps within the local community.

“It takes a community to meet the health care needs of a community,” she said.

Niagara EMS is the first paramedic service in Canada to use the Emergency Communication Nurse System™ (ECNS™). The ECNS integrates into existing 911 practices to offer alternative care for patients calling 911 with non-emergent health-related complaints falling within the Academy-approved, low-acuity OMEGA Determinant Codes and many ALPHA Determinant Codes. A caller reporting a medical emergency (whether their own or someone else’s) phones 911 and is connected to an EMD, who triages the call using ProQA® to determine the most important, highest-priority symptoms, as well as severity and urgency of symptoms.

If the EMD determines—using medically-approved scripted protocols—that the caller is reporting a low-acuity call with no immediate life-threatening symptoms, the EMD transfers the call to the Emergency Communication Nurse (ECN). The ECN asks the caller additional questions, selects the most appropriate Chief Complaint Protocol, and through further questioning of the patient’s symptoms, determines the most appropriate care for each individual patient.

ECNS went live in September 2019 and has proven a “huge success,” Lutz-Graul said, resulting in reducing ambulance transport by 40% among the low-acuity patients during its first six months of operations. A return call is made 24 hours after initial contact when transport was not required or requested. Additionally, the ECNs work in collaboration with the MIH teams when they feel they would like “eyes” on the caller should they have some of those callers who are over 65 who may have some significant health issues.

MIH teams have decreased call volumes related to frequent users and others benefitting from alternative care models. The numbers from the first year of the MIH program show that 80% of the 5,000 callers receiving services from an MIH team were helped without transport. Repeat calls increased by only 4%, compared to 15% during previous years.

A decrease in the number of ambulance transfers lightens an increasing demand on paramedics and frees the vehicle for patients with life-threatening emergencies.

Lutz-Graul said her assignment as the System Transformation project lead was an opportunity to make significant and sustainable changes “with the help of everyone” that got on board.

“This was never a one person project,” she said. “It’s really nice to say we’re not siloed. It’s amazing to see how well this works through collaboration.”

Niagara Regional 911 is an Academy Accredited Center of Excellence (ACE). The center re-accredited for the fifth time in January 2020. Niagara Regional 911 is in southern Ontario on a peninsula created by the Niagara River on the east and between lakes Ontario (north) and Erie (south). The Canadian side of Niagara Falls and a burgeoning wine industry draw millions of tourists to the region each year.

Niagara By the Numbers