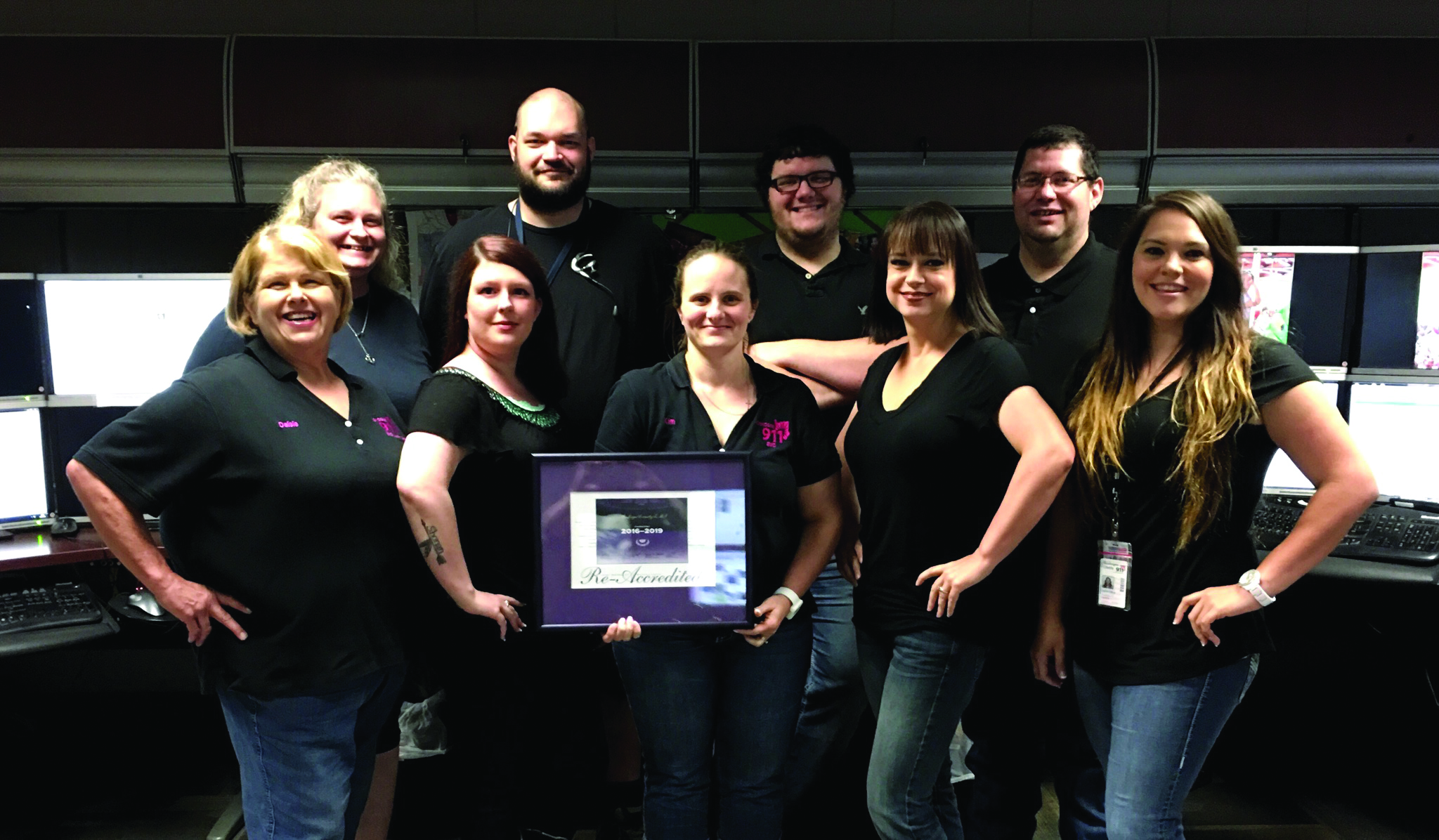 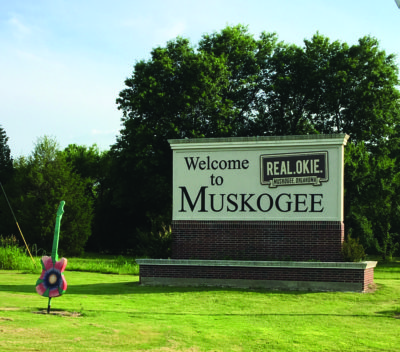 Well, maybe that’s an exaggeration and on the same par as suggesting that the 13 EMDs know each person by sight if not by name.

But, again, perhaps that’s not too far from the truth.

“This is home, and this is where I want to be,” said Delsie Lewis, a lifelong resident of the county. “The same for the people working here. This is where we plan to stay.”

Muskogee County is near the eastern border of Oklahoma. The varied topography includes prairie grassland in the west and wooded Cookson Hills in the east at the fringe of the Ozark Mountains. Three Forks is the confluence of the Arkansas, Verdigris, and Neosho rivers.

Lewis never seriously considered leaving Muskogee County, and neither did she foresee a career in public service. But after a 20-year career in retail, switching to emergency dispatch was going in the right direction. She has a degree in sociology/criminal law from Northeastern State University, Oklahoma, and she is devoted to the community.

“I’m comfortable here,” said Lewis, who has been involved in numerous city boards and councils. “It’s important to be part of the community and make it a better place to live.”

Twenty-five years ago, emergency communications in Muskogee County required phone and note-taking skills and the ability to work 12-hour shifts or longer in case one of four dispatchers quit, called in sick, or took a vacation.

“We’d get an address, chief complaint, and gender, and ask if the patient was breathing and conscious,” Lewis said. “We wrote the patient’s information on a piece of paper and dispatched an ambulance. I was thrilled when my boss started looking into the MPDS.”

The Medical Priority Dispatch System meant they could do more for the caller, patient, and bystander, Lewis said. The arrival of ProQA simplified their accreditation process (achieved ACE in May 2000) and, last year, ProQA coupled with the online accreditation system just about made the recertification process a snap.

ACE, Lewis said, is the sign of professionalism—the frosting on an emergency dispatch career that highlights the positive effects one person can have on another.

“I love to watch the new people come in and make this a career,” Lewis said. “They see the ton of difference they can make in a person’s life.”

The significance of dispatch in the chain of emergency response was highlighted in April 2015 when the Oklahoma Ambulance Association (OKAMA) honored EMD Kandis Crespy with the annual Stars of Life Award. OKAMA presents the awards each year to recognize EMS employees for an outstanding save. Crespy, an EMD since 2006, is credited with providing CPR Pre-Arrival Instructions that ultimately led to the survival of two patients on two separate occasions.

“Before I started, I was told not everyone can do this job,” Crespy said. “That’s probably true, but it’s been great for me. Emergency services is a great cause. We help people, and like many in the field, there’s the adrenaline rush I enjoy.”

Muskogee County is a great place to live and work, Lewis said, but like with everything else, some parts take getting used to.

Muskogee County shares the dubious nickname “Tornado Alley.” The region from central Texas, northward to northern Iowa, and from central Kansas and Nebraska east to western Ohio is ideally situated for the formation of supercell thunderstorms, often the producers of violent (EF-2 or greater) tornadoes.1

Muskogee County averages three tornadoes per year, although during the past five years there’s been a relative lull in activity. According to the National Weather Service Weather Forecast Office in Norman, Okla., five tornadoes between the years 2010 and 2015 measuring EF-1 and EF-2 have touched down in Muskogee County, causing three injuries.2

The largest tornado to pummel the county, an EF-4, occurred on May 1973 and had a different impact. Five people, including four from the same family (two adults and two children), died, and the immense twister forever changed the landscape and emergency warning system.

At that time, there was no storm warning system, no centralized EMS ambulance re-sponse, no emergency 911 number, and no emergency operations centers. Volunteers in each community fanned out sounding sirens when weather was threatening. Most rural area residents depended on each other for assistance.

Lewis recalls the lack of EMS when, while in high school, she was in a car accident.

“My parents took me to the hospital,” she said. “But that’s the way it was. I later went to EMT school thinking it would be a good background to care for my parents as they aged.”

Today, there are 18 fire departments (17 are volunteer) and a consolidated emergency 911 communication center managed by Muskogee County 911 Coordinator Darryl Maggard.

The ambulance service operates the medical side of 911, while the consolidated 911 center operates both fire and law enforcement calltaking and dispatch. The two separate emergency dispatch staffs occupy the same building, but when a major event occurs or when staffing is low, dispatchers share responsibilities on the phones and radios.

“We do what we can to supplement first responders,” said Bolding, the EOC’s only full-time staff member. “And if we have a situation, we can use the center to maintain operations.”

Lewis said that hasn’t happened yet since the two staffs and EOC consolidated into one building in July 2011. The emergency dispatch center has weather protocols in place and the building was designed to withstand a Level 5 tornado (winds up to 318 mph).

“You get used to the storms,” she said. “You listen to the warnings and stay alert to your surroundings. You know where to go in an emergency.”

While Lewis has seen plenty of small tornadoes, she has yet to witness the intensity of the EF-5 tornado that struck Moore, Okla., on May 20, 2013, with peak winds estimated at 210 mph. The tornado killed 24 people, including seven children taking cover inside an elementary school, and injured 37 others. Property damage was estimated in the millions.

Bolding was working in emergency services for the state when the tornado struck and, in a way, the devastation and aftermath provide the reason why he savors his second career in emergency operations following a career in software development.

“If you told me I’d have a career in emergency planning, I would have said you’re crazy,” said Bolding, who grew up in Muskogee County. “Once I got into it, I loved it. You’re standing in a road and know where you are by the address painted on the curb. Your heart breaks but you have the opportunity to help. It’s rewarding to be a part of rebuilding communities and lives.”