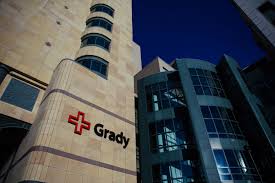 Persistence Beyond The Call

The problem with the 911 call was not about knowing what to do or the response to send.

EMDs at Grady EMS Communication Center, Atlanta, Georgia, had those pieces well in place. The wheezing of caller's breath heard over the phone alerted them to severe respiratory distress the needed immediate response. The call was dispatched as a possible stroke.

The difficulty was unraveling the mystery behind the patient and it took four dispatchers five hours to reach the climatic end.

The call came in at 5:24 a.m. Feb. 23, shortly before the night shift was about done for the day. Grady Ems Communication Center EMD Olaoye Oluwadamilola, or “Dami,” was the second calltaker on the line, and almost to the end of his shift. The caller’s voice was hoarse, Dami said, and when there was a response, “I couldn’t get a good answer.” Red door. Outside light on. They didn’t check out, resulting in responders literally driving around in circles at the sprawling Atlanta complex.

The specific apartment, however, proved to be only one piece of the puzzle. The caller’s medical condition prevented answers about family, friends, or co-workers to contact or the possibility of signaling for help from neighbors. It wasn’t long until every emergency dispatcher present was in on the call, including Susi Marsan, training coordinator.

“We kept trying different approaches, but with the caller going in and out of consciousness, it was impossible [for the caller] to communicate clearly.”

Did they give up? Not on your life.

As the call progressed into the day shift, a third and then fourth EMD took over and, like the first and second EMD, were unable to gather intelligible information. Gasping breaths muffled the caller's voice. Time ticked away. Was the individual still with them? How long could the caller hang on? Would they be able to pinpoint the location? They had X and Y coordinates. No Z. Dami was able to ping an intersection, allowing them to approximate the caller’s building within the complex. They picked up a sound of knocking on the apartment’s door. No one answered. They later learned it was a co-worker, concerned about a friend who seldom missed a day of work.

Continued passes by the ambulance crew yielded no sighting of a light on outside or a red door. Their sirens eventually faded in the background of the call. Response had cancelled. No person found.

Yet, there was a person somewhere at that Gladstone Apartment complex who was in a life-threatening condition and needed medical assistance. The EMDs brainstormed. They used calming techniques when the sound of breathing indicated the caller was still on the line. “We’re with you.” “Don’t give up.” “We want to help you.”

“We were drawing on every straw we had,” Marsan said.

Dami stayed on the phone past the end of his shift. He couldn’t let the call go.

Dami was among four emergency dispatchers to eventually converge at the huge complex. Field Medic Tracy Arnold, who was leaving a call and listening to the EMS radio, joined the search. EMDs back at the center hung on the call. Those on location knocked on doors. Residents were helpful, Dami said, but no one recognized the name of the elderly woman—Linda Peterson—the caller had provided during initial caller questioning.

“We were a team desperately coming together to find a needle in a haystack,” Arnold posted on Facebook (dated Feb. 4).

The caller’s phone went dead and the EMDs and field medics held on.

Night dispatchers were able to “ping” the ongoing cell phone conversation to a location. They tracked the phone and zeroed in on one complex. They had a name and called the leasing agent when the management’s office opened at 9 a.m., but that further confused the situation. Hope faded quickly. There was no one by the name of “Linda Peterson” or the surname “Peterson” leasing an apartment.

What happened next was truly God-sent, Arnold wrote in her Facebook post. The night dispatcher remembered a random last name and mention of a blue Buick. The leasing agent recognized the name. It was not Linda Peterson. The last name belonged to a male tenant. The license plate on the blue Buick found in the parking lot was registered to the same name. The agent gave them the corresponding apartment key. They did not hesitate. They found an apartment with a green door (not red) and there were no outside lights. But the key fit, they unlocked the door and went inside.

“He was sitting on the bed,” Dami said. “He looked relieved. We were glad, well, actually ecstatic. We had found him. We were able to get him help.”

Marsan and the EMDs hanging on to every second of the search breathed a huge sigh of relief.

“We clapped,” Marsan said. “They found him.”

A Grady Health mobile stroke unit was activated immediately. He was treated on scene and transported to the Grady stroke center where doctors performed a thrombectomy. A blood clot was removed from a cerebral artery. The next day, he was alert and could say his real name. Testing revealed minimal neurological impact.

The call and rescue made a lasting impression on everyone who was involved, simply present, or later hearing about the incident.

“I’ve never experienced anything like this before,” said Marsan, training coordinator at Grady for the past eight years and prior to that, 12 years with the IAED. “Phenomenal. Without our persistence, no telling what would have happened to him. We saved his life.”

And for Dami, getting help for the patient reinforced his professional dedication.

“I never had a patient I couldn’t help, and I certainly wasn’t going to give up on him,” said Dami, a combat medic for the U.S. Army. “We do our best to locate our patients and get the best care possible. I’m sure all of us, any of us at Grady, would do it again for someone else.”

Cliveita Brown, Director of 9-1-1 Communications for Grady EMS, presented a Platinum Award to the 18 people involved in saving the patient’s life. The group included the four EMDs, who had rotated through the call and went to look for him, and the field medics.

“I can’t thank our dispatchers and crews enough for being a part of Grady EMS,” Arnold concluded in her Facebook post. “We all are ‘Second TO None.’ God Bless you all!"