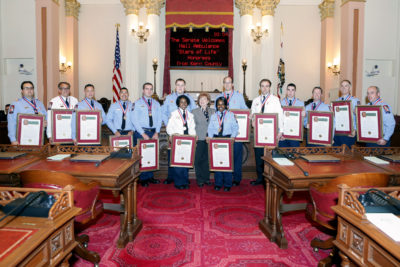 How do you beat a day at the state capitol honored by the legislature, revered by school children and adults visiting the capitol on the same day, and going home with an Olympic-looking metal worn on your neck for a photo taken with a state senator?

“I’m extra careful because I don’t want to let anybody down,” said Britton, recipient of a Star of Life award sponsored through the California Ambulance Association, presented on March 7. “I am always trying to improve.”

It’s not like Britton could let anybody down, particularly as a calltaker/dispatcher for the private ambulance company that provides ambulance response to over 87 percent of Kern County. Britton practices the Medical Priority Dispatch System™ (MPDS®) Protocol on her own time, concentrating on Pre-Arrival Instructions, and actually sets compliance goals. She’s at 100 percent. She was the company’s Dispatcher of the Year in 2015.

“She’s a rock star in the profession,” said Mark Corum, Hall Ambulance Director of Media Services. “To achieve such a high performance level so early in her career is outstanding!”

The “rock star” downplays the attribution. She credits EMD Laura Swank, who provided hands-on training following EMD certification, and the other EMDs for their continued patience in answering all her questions. Working in an emergency call center also satisfies her desire to help people during times they need it the most.

“I was surprised [by the nomination],” she said. “This isn’t something I expected after being here for only two years. It made me very happy because I am proud of what I do.”

Britton answers calls and dispatches response. In 2015, she was the calltaker on 8,498 calls and the dispatcher on another 7,873 calls. She gave PAIs a total of 844 times during the same year. Her most memorable calls involve giving CPR PAIs for patients in cardiac arrest.

“My heart stops for a second each time because these are scary calls,” she said. “But just for a second. I have to stay calm for the patients to give the help they need before the ambulance arrives.”

Britton’s secret to staying calm is twofold: scripted MPDS Protocol and a “laid-back” personality in combination with taking a deep breath after a particularly stressful call before going on to the next. She said the award is also indicative of another path to success: Hall Ambulance philosophy.

“I wasn’t planning on going back to emergency communications after I graduated,” said Britton, who was a police dispatcher in the city for several months before going back for a bachelor’s degree in criminal justice. “But I had liked the work and saw there was an opening here. It’s a great place. They make sure we have everything we need to do the best we can.”

Britton was among a total of 50 EMS recipients from throughout the state presented with the Star of Life award in recognition of their overall outstanding performance and, also, lifesaving efforts in notable emergencies. The awards, given annually, included a gala celebration at the Embassy Suites in Sacramento, Calif., and, for the 14 members of Hall Ambulance receiving the award, a reception at the state capitol hosted by Sen. Jean Fuller (Bakersfield).

Following a full uniform procession to the Senate Republican Leader’s Office—through a crowd of admiring onlookers—Fuller presented Senate Resolutions honoring each of the Hall Ambulance recipients for their individual bravery and commitment to making their community safe.

Hall Ambulance’s OCD dispatches all ambulance requests for medical aid in Kern County and is an Academy medical Accredited Center of Excellence.