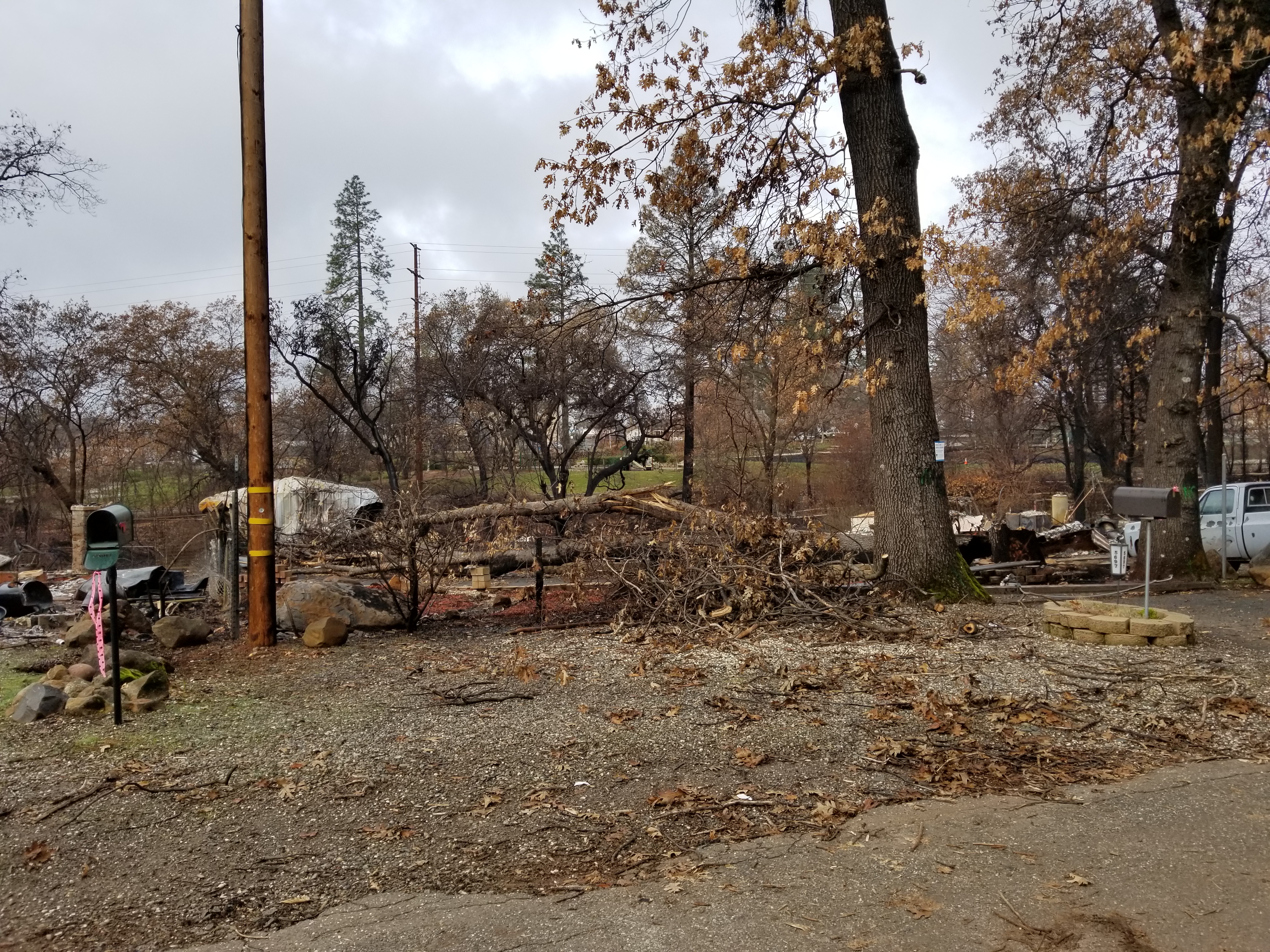 Not Their Place To Run

Photos from the fire devastating Northern California (USA) during November chronicle the extensive damage and personal loss—charred remains of cars, homes, businesses, and schools and the relentless search for human remains.

Paradise High School administrators reported that 80 to 90 percent of students lost their homes to the fire with many of their families not knowing when or if they would return; while the high school still stands, several other schools were destroyed, including Paradise Elementary and Ridgeview High School in nearby Magalia.1

“There are no words to describe the situation, the feelings inside,” said Paradise Police Department Dispatcher Jeannette Huggins. “Paradise was very pretty: trees, lots of green, blue skies. Now, there’s not much left to look at.”

Camp Fire, so named from where the fire originated on Camp Creek Road about 8 miles from Paradise, started shortly before sunrise on Nov. 8, 2018, and, propelled by strong winds and dry vegetation, raced down steep canyon walls to the towns below. According to a CAL Fire update, issued at 7 a.m. on Nov. 10: “Strong NE winds are expected to return this evening. The fire area is still under the influence of low relative humidity, dry fuel moistures. Moderate to extreme fire behavior are possible including spotting, wind driven runs, torching and crowning. The fire will continue to burn to the NW impacting the communities of Magalia and Paradise Pines.”2

And that was only the beginning.

Huggins was called early into the Paradise Police Department communication center on the morning the fire’s swift progress moved south and west from the surrounding hillsides of Pugla and into Concow, Magalia, and Paradise. Shortly after 8 a.m., Butte County Fire Department notified Paradise dispatchers of their orders to evacuate the entire town, turning Huggins’ normally five-minute drive to the police department into an hour of working her way through the traffic congestion. Paradise sits on a hilltop hemmed in by canyons with four narrow winding roads giving access to 26,000 people.

Huggins remembers driving under a dark sky shrouding Paradise in midnight hues, not the usual early morning sunlight peeking above the hilltops. Smoke was thick, clouding familiar landmarks, street signs, and buildings. Visibility was the distance from her dashboard to maybe a few feet ahead of her front bumper, tops.

Shortly after 9 a.m., Huggins and a second dispatcher joined the one Paradise dispatcher on duty when the fire was first reported. The small three-console dispatch center was overwhelmed with calls, and their struggle to keep up with a number easily 10 times their normal volume during that time of day necessitated rerouting overflow to Butte County EMS in nearby Chico. Other 911 centers, including the Butte County Sheriff’s Office (BCSO) in Oroville, were also taking calls.

Paradise dispatchers relied on resident reports and fire departments to gauge the fire’s location; but not only was the fire moving exceptionally fast, but it was exhibiting unpredictable behavior. Spot fires sparked by embers thrown by high winds were merging and feeding into the mother fire. As instructed, the dispatchers told callers to evacuate, to grab their pets and all the belongings they could gather in a short time.

“We were also instructed to tell people that, if trapped by fire, get out and run to the nearest black area they could find,” Huggins said. “It would be smoky and hot, but at least there wasn’t anything left there to burn.”

Huggins answered calls and dispatched into the night (15 hours straight) between two centers—first at Paradise and then, when public service personnel were evacuated, at Chico where Paradise emergency dispatchers worked for the first days of the fire before being moved over to the BCSO dispatch center. By then, Paradise was not the same place Huggins had left a relatively short time earlier.

“Paradise is gone,” she said. “At least 90 percent of what I remember.”

The home where she, her husband, and their three dogs lived for the past two years was reduced to ashes. Only a brick chimney remains. They’re now living in a trailer on property owned by her husband’s grandmother and, at this point, have no intention of going back.

The Paradise Police Department building was mostly spared, although infrastructure destroyed by fire and smoke prevents operations from moving back in. A return date has not been set.

BCSO Dispatch Supervisor Trina Wehle hasn’t worked out of her office since Nov. 10—the day she offered the space for the temporary relocation of Paradise Police Department dispatchers. The formerly six positions at BCSO has since increased to eight positions to accommodate the Paradise dispatchers rather than confining them to the mini-dispatch room.

The 17-day Camp Fire was chaotic, to say the least, Wehle said. Call volume was incredible, even once people stopped calling to ask for help in evacuation.

“Then we got the calls from people looking for family and friends,” Wehle said.

Wehle was getting ready to leave for work when she received a first text at 6:35 a.m. on Nov. 8. Deputies were evacuating the small town of Pugla. By the time she reached the center, the tenor of callers was changing from “I see smoke in the hills” to “the fire’s getting close; what do I need to do?”

People fled, taking only what they could carry or grab at the last moment. Makeshift tent and trailer camps in the Walmart parking lot served as temporary lodgings for many who lost their homes. An abandoned Sears building located in the Chico shopping mall hosted long lines of people waiting to sign up for assistance from the Federal Emergency Management Agency (FEMA). Cleaning up fire debris is expected to extend into summer.

Emergency Dispatcher Savanna Hawley received donations from friends, family, co-workers, and nonprofit organizations after learning her story of escaping—literally—with only the pajamas she had worn to bed, a sweatshirt thrown on in haste, and a pair of slippers on her feet. Yet, it wasn’t the fire that woke up Hawley on her day off from the Chico Police Department 911 center. It was a CodeRed text message emergency alert and evacuation order. CodeRed is a mass notification system that sends alerts to people in an affected area.

Hawley ran to the hall stairs and glanced out a window. The sky was exceptionally dark, and a there was a fiery glow over the hills close to where she, her boyfriend, and their six pets lived in rural Paradise.

“I didn’t know how much time I had, but I knew it wasn’t much,” she said. She grabbed their three dogs and cat, put them in the truck, and opted to leave behind a pet snake and turtle, certain they would survive during an anticipated short absence. Having no family in Paradise, she and her boyfriend drove to Redding, California, where family lives.

That didn’t happen. The absence has been long and disheartening.

One day later, on Friday, Nov. 9, Hawley knew they had lost their home to fire. The drive back—once the area was opened to residents in December—took them through a gray haze of smoke and ash. Paradise police and Butte County Sheriff’s deputies checked addresses to keep the general public out. Butte County Health Department handed out free booties and HAZMAT suits to protect residents when digging through the rubble. Roads rutted by three days of heavy rain confounded travel, while the thick mixture of mud and ash frustrated the search for salvageable property.

“We didn’t recover anything,” Hawley said. “We lost everything.”

The house they had purchased just four months earlier was gone. One of their three dogs—a Yorkie—died from what Hawley believes was the stress of the fire and moving to temporary lodging.

“It’s hard, super emotional,” said Hawley, who credits emergency dispatch as her saving grace despite having started the stressful job seven months prior to Camp Fire.

"Being here keeps me sane,” she said. “I can put my problems aside and considering what happened to me, I’m proving this is something I can do.”

Hawley was among the Butte County emergency dispatchers treated to a pre-Christmas dinner sponsored by 911Cares, which donated $12,000 in cash, gift cards, and gifts from contributions to the philanthropic arm of Public Safety Training Consultants (PSTC).

Dispatchers were also able to "shop" (for free) and pick out clothes, food, toys, or pet food from the Butte County public safety store set up with any donations sent to them from around the country.

The 1 million acres of land in Butte County ranges in elevation from 60 feet to 7,000 feet above sea level. The Sacramento Valley section in the southwest is relatively flat and is predominantly grassland and farmland. In the northeast portion are the foothills and mountains of the northern Sierra Nevada and southern Cascade Mountains. This area is scattered with homes and communities intermixed among woodland fuels creating a serious wildland urban interface problem.4

CAL Fire is a secondary PSAP. All 911 calls are first answered by the primary PSAP, which is the jurisdictional law enforcement agency. If the call involves fire rescue, medical, or other non-law enforcement emergencies/calls for service, the caller is immediately transferred to the Butte ECC.