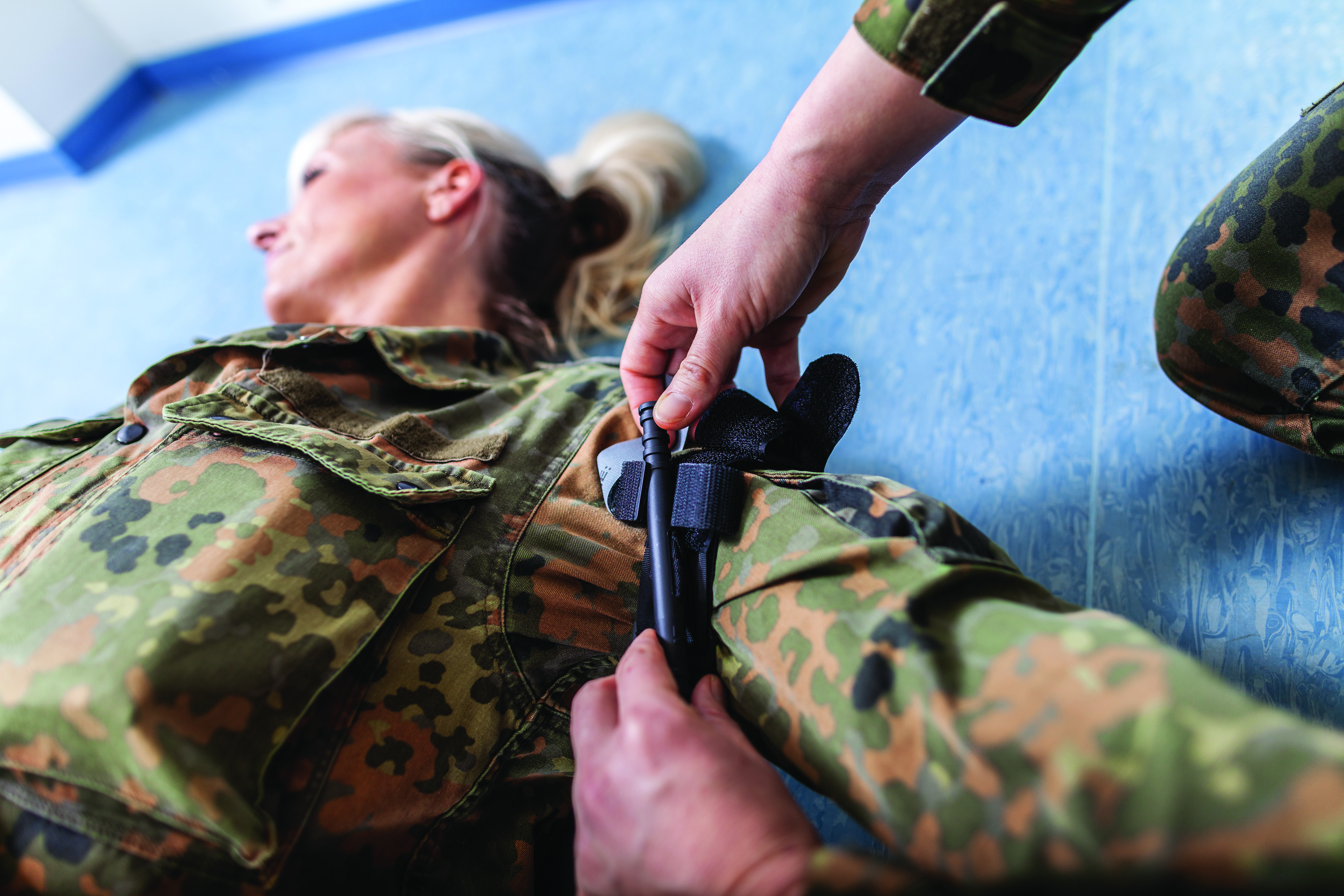 The “hero in the cowboy hat” Carlos Arredondo grabbed the first thing he saw that might work to save a spectator collapsed on the ground, unable to stand, his legs shattered to “torn flesh and a length of bare bone” from the bombs detonated at the 2013 Boston Marathon.

“Somebody’s sweater,” Arredondo said. “I tore it apart,”1 and he placed it around Jeff Bauman’s right leg. Gauze wraps had been tied around his left leg moments earlier by Allan Panter, a physician who had been near Bauman in the crowd.

Tourniquets stopped what could have been fatal bleeding in many victims at the Boston Marathon, and Bauman is quick to credit the two men and the tourniquets they placed for saving his life. Less than a year later, Bauman said as much to responders from 23 agencies attending a tourniquet training course.

“Carlos put the tourniquet around my right leg,” Bauman said, “and someone [Dr. Panter] tied a shoelace [it was actually gauze] around my left leg really, really tight. And doing that right there bought me 10 minutes of my life. Tourniquets saved my life.”2

Tourniquets are back in EMS vogue.

It’s not because of the Boston Marathon bombing, but instead because they do work as Bauman’s survival indicates. Research dispels some—although not all—reasons why tourniquets fell from medical grace to a device of last resort in hemorrhage control.

Numerous studies supporting the tourniquet’s return have the device counted among the essential gear of fire/EMS systems and stationed alongside AEDs at airports and other potential targets of mass casualty incidents. The U.S. Department of Homeland Security’s Stop the Bleed program is a nationwide campaign to teach bystanders how to provide initial response to stop uncontrolled bleeding in emergency situations. Uncontrolled, life-threatening hemorrhaging is one of the leading causes of preventable death following a traumatic injury, and a person who is bleeding uncontrollably can die from blood loss within five minutes.

The International Academies of Emergency Dispatch® (IAED™) is a charter member of the Stop the Bleed campaign, and instructions for tourniquet use are available in Medical Priority Dispatch System™ (MPDS®) version 13.2. Protocol T: Tourniquet was developed "from scratch” by an Academy research team that spent the better part of a year drafting the proposal and performing pre-testing prior to a volunteer-focused study conducted at four venues in Salt Lake County, Utah (USA), enlisting 246 participants.

The increase in mass casualty and violent attacks in recent years are pushing emergency medical recommendations for public installation of emergency bleed kits and to co-locate the kits next to AEDs. The Salt Lake International Airport, an IAED Accredited Center of Excellence (ACE), placed emergency trauma bleeding control kits next to AEDs for easy and familiar access to the public and airport operations. The bleed kits, assembled specifically for airport use in cooperation with Salt Lake City Fire Department Heavy Rescue Specialists, contain tourniquets, chest seals, trauma bandages, gauze, gloves, markers, and instructions.

Airport operations employees have received Stop the Bleed program training and since installation of the bleeding control kits, a tourniquet was used in response to a traveler who had fallen down an escalator, according to Heidi Harward, Operations Manager—Safety Programs at Salt Lake City Department of Airports.

In ProQA®,DLS Smart Links for Amputation/Severe limb injury with (uncontrolled) SERIOUS hemorrhage will guide the emergency dispatcher to the tourniquet instructions. The DLS Link is incorporated in the following protocols:

Three separate sets of instructions within the PAIs give step-by-step application instructions depending on the type of tourniquet available: commercial (manufactured) with Velcro, commercial without Velcro, and makeshift tourniquets.

The best makeshift tourniquets are between 2 and 3 inches wide and 3 to 4 feet long and made of material pliable enough for inserting a short stick to tighten the material until the bleeding stops. A long-sleeved shirt, bathrobe belt, or necktie can be used as the makeshift tourniquet. The emergency dispatcher should never recommend the use of a clothes belt because, although it may slow some bleeding, the stiff fabric cannot be adequately tightened to compress the arteries. Materials less than 1 to 2 inches wide should also be avoided since they are usually too narrow to cause enough total tissue compression to stop most arterial bleeding and are far more likely to cause tissue and nerve damage.3

Each section begins with instructions to place the strap/cloth around the arm/leg at about 2 to 3 inches (5–8 cm) higher on the limb (closer to the shoulder/hip) than the bleeding site. The strap/cloth should never be wrapped around a joint or over the wound. If need be, the strap/cloth can be placed 1 to 2 inches (3–5 cm) away from the joint. It’s OK to lift the arm or leg to get the strap beneath the limb.

The next step involves securing the strap/cloth and then tightening it as hard as possible against the limb and fastening the ends (Velcro to Velcro, buckling or looping the ends in the non-Velcro device, or tying a half-knot down with the knot facing up on the limb for a makeshift tourniquet). Finally, the caller is told to keep tightening the strap/cloth until all the bleeding stops. This is done with the rod (windlass) attached to the commercial tourniquets or a stick for the makeshift tourniquet. If no stick is available, the caller is told to tighten the knot as hard as the person is able and to hold it until help arrives.

If the patient complains of pain from the pressure, the emergency dispatcher assures the caller that pain is not uncommon and, above all else, to keep the strap tight. As stated in the Bleeding Control Axiom accompanying the instructions: Adequate control of almost all bleeding is simple if enough pressure is applied to the right place.

While the PAIs are easy to follow and the tourniquets seemingly require little more than common sense to apply, the same can’t be said of the process to develop instructions specific to the emergency dispatch setting. The research team could only observe participants following over-the-phone test instructions in applying a tourniquet to stop a catastrophic bleed for a simulated limb and note where common errors occurred.

At each of the 10 study sites, participants called a simulated 911 line and reported a victim with life-threatening bleeding to the leg, which is identified in the real world as4:

Blood that is spurting out of the wound

Blood that won’t stop coming out of the wound

Blood that is pooling on the ground

Clothing that is soaked with blood

Bandages that are soaked with blood

Loss of all or part of an arm or leg

“We could watch how people reacted [in response to the instructions], but we couldn’t step in,” said Chris Olola, Ph.D., IAED, Director, Biomedical Informatics and Research. “It took a lot of testing and revision before adding it to the existing protocol.”

The Tourniquet Protocol doesn’t replace direct pressure in most bleeding situations, cautioned Greg Scott, IAED, Operations Research Analyst. “A tourniquet is the best way to stop the bleeding from catastrophic injury. Direct pressure is still the preferred method for abrasion.”

As in the EMD’s First Law of Safety, the bystander is cautioned against creating “more victims at the scene.” Bystanders must ensure their own safety and provide care to the injured person if the scene is safe to do so. If safety is threatened, the bystander should move from the danger, taking the victim if possible, to find a safe location.

The history of the tourniquet—a word influenced by the French tourner, which means “to turn”—dates back centuries to the Roman Empire when a leather-coated bronze thigh strap was fastened and tightened to save a life in battle, without regard to saving a limb.5 Take a huge leap forward to World War I and the decline of the tourniquet in favor of applied pressure due to noted increases in nerve damage and other medical morbidities when a tourniquet was applied.

The official British manual, republished by the U.S. government in 1918, Injuries and Diseases of War, strongly denounced the use of a tourniquet: “The systematic use of the elastic tourniquet cannot be too severely condemned. The employment of it, except as a temporary measure during an operation, usually indicates that the person employing it is quite ignorant both of how to stop bleeding properly and also of the danger to life and limb caused by the tourniquet.”6 It was demanded that the medical officer remove the tourniquet at once.

The wars in Afghanistan and Iraq reintroduced tourniquets to the point where “Combat troops are reportedly going out on dangerous patrol missions with tourniquets already in place on extremities, as they wish to be fully ready to respond to extremity bleeding, if and when the mine or the improvised explosive device (IED) should go off.”7

While a simple tourniquet can save a life, there are also times when not to use one. They should never be used when simple pressure or pressure dressing suffices to control the bleeding, and they should never be partially applied, which fails to occlude the artery and can increase venous bleeding.8

4 Pons PT, Jacobs L. “Save a life: What everyone should know to stop bleeding after an injury.” American College of Surgeons. 2016. https://www.bleedingcontrol.org/resources/how-to-stop-the-bleed (accessed Aug. 28, 2019).