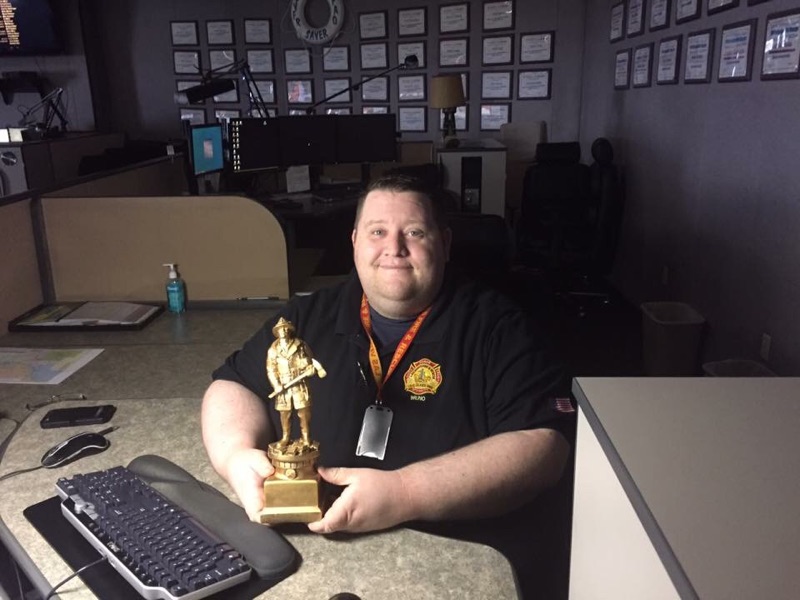 Never Off The Clock

Like all dispatchers, Anthony Bruno has dedicated his career to helping people. Bruno works long and late hours answering frantic phone calls from people who are experiencing the most frightful moments of their lives.

So naturally, the Communication Specialist with Las Vegas Fire & Rescue, Las Vegas, Nevada, USA, came to the rescue even when the headset was off and he was away from the communication center.

In March 2016, Bruno’s instinctive actions helped save a man’s life. In the several months following this heroic intervention, he has been showered with awards and recognition.

The incident happened when Bruno wasn’t even on duty.

Bruno had clocked out from the Fire Alarm Office, as it is locally called, at 2 a.m. After another challenging day on the phones, he was headed home for some much-needed rest. Not long into his commute home, Bruno saw a technical rescue truck enter the freeway; its bright lights signaled that an emergency was nearby. Next, Bruno saw a helicopter getting ready to land on the freeway. As he approached the scene of an accident, Bruno stopped his car a safe distance away and stepped out of his truck to watch the crews do their work.

A Nissan had rear-ended a Ford Fusion, sending both cars off the road; the Ford flipped several times and landed far from view. Calls to 911 had reported only one car was involved, so paramedics weren’t aware of the second vehicle. The responders did their work and left the scene. Bruno prepared to get back into his truck to leave, but he heard a whimpering noise or the sound of an injured animal off in the distance. Initially, he disregarded the noise and was about the drive away, but a “gut feeling” urged him to investigate. Bruno ventured off into the darkness of a deserted field and came upon the Ford, upside down with someone trapped inside, about 100 yards away from the original accident.

“Help me!” the person pleaded.

Bruno spoke to the 20-year-old man, who later was determined to have been trapped for an hour and two minutes, and reassured him that help would be on the way. Bruno ran up the road to where a Nevada Highway Patrolman was helping with the aftermath of the accident.

After summoning help, the officer joined him at the scene, and the officer called dispatch. Bruno was used to being on the headset, hearing people desperately plea for rescue to come. In an odd twist, he began to wonder what so many callers ask dispatchers.

“The first thing that went through my mind was, ‘What’s taking so long?’” he said. “It’s a different feeling to be in [the caller’s] shoes. Imagine being a loved one of a victim. I was a complete stranger, and I was so worried about the guy. It’s a difficult feeling to describe. I’m used to callers getting frustrated as they wait. Now, I feel comfortable saying, ‘I know it seems like a long time.’ I experienced it first-hand on the other side.”

Help did come, and the man survived. Those who arrived on-scene said without Bruno’s efforts, the victim wouldn’t have lived.

The long list of accolades came as a surprise to the humble Bruno.

“I wasn’t expecting it,” he said regarding the Employee of the Year award, in particular. “I was shocked. [City representatives] came and surprised me with the award.”

Though grateful for the acknowledgement, Bruno shies away from the limelight and dismisses the notion that he is a hero. In his mind, he was only doing what anyone else would do and was simply performing a duty that spilled over from his everyday work as a dispatcher.

“It felt good to be honored, but I don’t look for recognition,” he said. “I’m not a hero. Heroes are the guys that cut the person out of the car. I don’t look at myself as a celebrity.”

Helping people is second nature for Bruno. Since graduating from high school in 2005, he has spent all his working time as a dispatcher. But it was with Las Vegas Fire & Rescue where he always wanted to be.

“As a kid, I used to come by and visit where I now currently work,” he said. “I tried six times to be a fire department dispatcher.”

Each time a job came up at Las Vegas Fire & Rescue, Bruno didn’t just apply, he was the first applicant each time, submitting his application at 12:01 a.m. the day the job came open.

The sixth time was the charm.

“I was so glad I got accepted,” he said.

Bruno has thrived under the headset, just as he was Johnny-on-the-spot as a bystander in the wee hours in March 2016. One of his secrets of success is a positive attitude and a genuine appreciation for his work.

“I love my job with a passion, “ he said. “I love what I do, and I love coming to work. I have the best co-workers; we’re the definition of a team. We talk about the worst every day. We bounce ideas off each other at work. At work I have true friends.”

Bruno said dispatching isn’t for everyone. After all, you’re talking to people on the worst days of their lives—helping them give CPR to a loved one, comforting them when a family member has committed suicide, or assisting with any number of terrible events. Yet, Bruno said the profession is rewarding and that he wouldn’t trade his experiences for anything.

And whether a call for help comes while he’s got a headset on or whether he sees a need away from the console, Bruno will be ready for action.