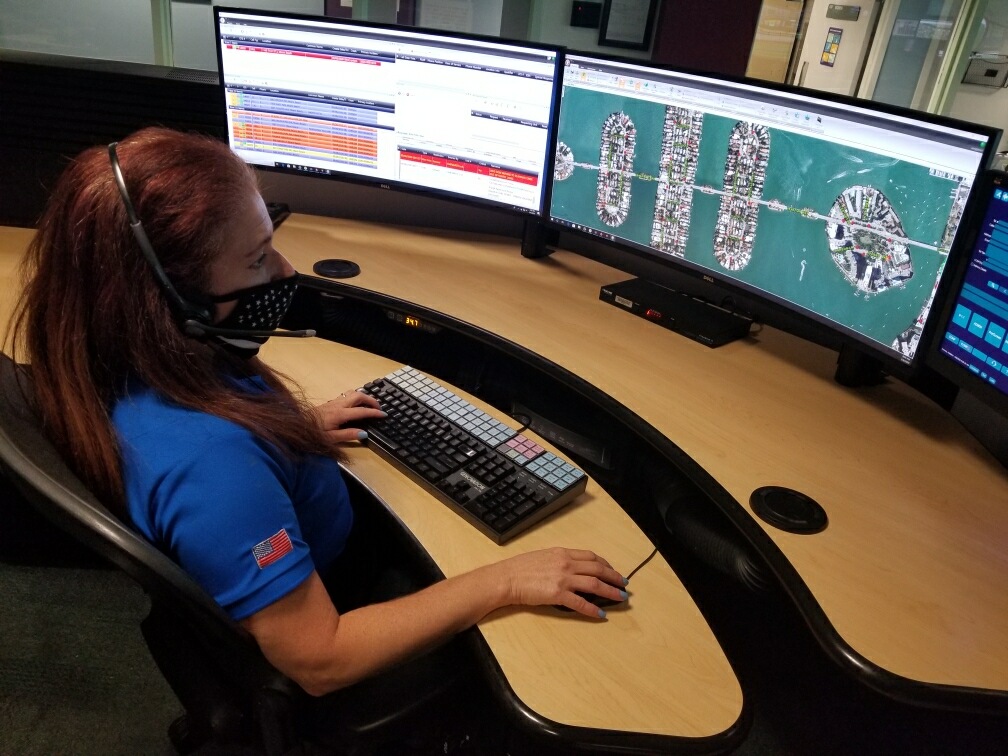 Miami Beach PSCD Ready For Anything & Everything

On Tuesday, Sept. 5, a state of emergency was declared for all Miami-Dade County, Florida (USA). On Sept. 6, the fast-moving Category 5 hurricane with 185 mile-per-hour winds was 1,438 miles east-southeast of Miami-Dade County. An estimated 600,000 residents and tourists in southern Florida were ordered to evacuate. 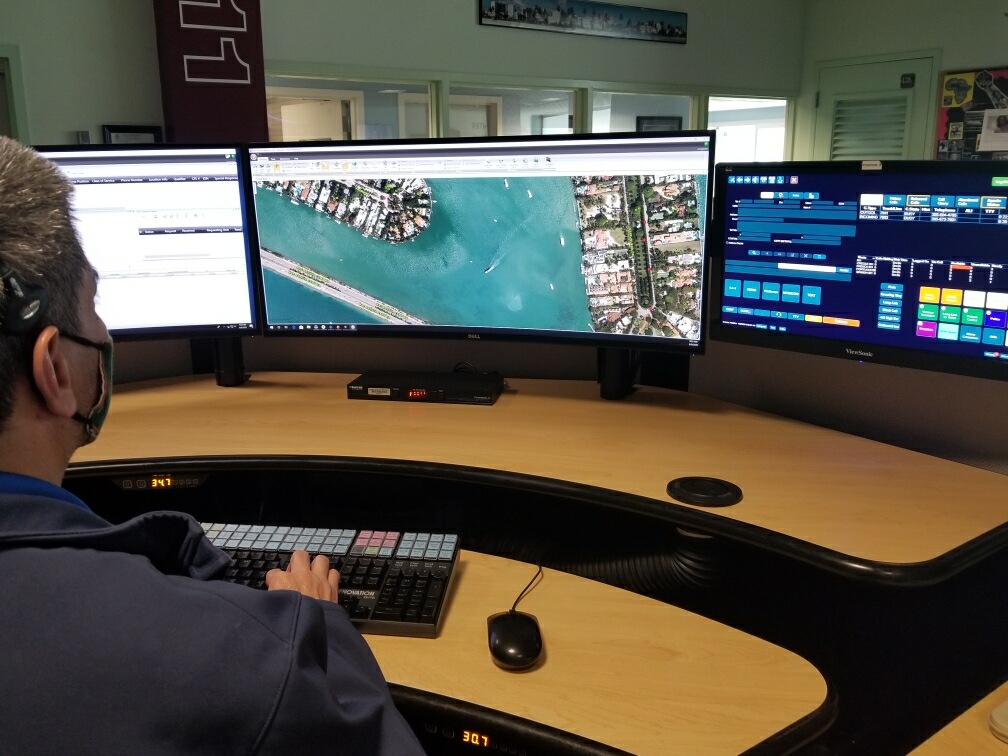 By the early morning hours of Saturday, Sept. 9, Hurricane Irma’s forecast track called for a direct strike into the middle and lower Florida Keys. By the morning of Sept. 11, Miami-Dade County was under a hurricane warning.1 Authorities expected that roughly 10% of the 700,000 Miami residents living in mandatory evacuation zones would seek public shelter.2

As residents prepared to shelter, the city manager transferred administration of the 911 center from the Department of Emergency Management to the fire department. As a result, Lazaro Guerra was established as the new administrator of Miami Beach Public Safety Communication Division (PSCD) coincidental to Irma’s arrival. The first stage in action was moving operations to the Miami-Dade County Police Department Communications Center, inside the Miami-Dade Police building in Doral. Once the hurricane arrived, this room served as the city’s sole dispatch center.3

Irma left behind a trail of vegetation, debris, flooding (from two to six feet), and power outages before roaring up the state's Gulf Coast to Georgia. When sustained winds dropped to less than 35 miles per hour, the City of Miami Beach Office of Emergency Response’s command center began sending first responders to the places of greatest need.4 Guerra and his personnel returned to their center 18 miles east of Doral.

To say the city of Miami Beach “hit the ground running” is underestimating the approach taken since day one. The new 911 administration appointed by the city manager in September 2017 moves at a pace that, like Irma, seems to accelerate in response to the goal of providing the “highest quality level of service to callers, police officers, and firefighters.”

Despite the transition in command, the PSCD remained in police headquarters and, in slightly more than one year (October 2017 to December 2018), took on an identity that the new administration team was determined to accomplish from the start.

“The culture changed,” Guerra said. “We put a heavy emphasis on customer service through quality assurance.” Customer service was made front and center to the PSCD’s environment.

The steps outlined in a brief report to the Miami Beach Mayor and City Commission demonstrate a domino effect but one with a plan to specifically achieve the new team’s intentions. The approach was not linear but an overlapping of targeted quality improvements, one complementing the other.

A high priority was hiring and training personnel to fill budgeted positions in calltaking, police/fire dispatching, and a criminal justice information system operator. The number hired—17—substantially reduced overtime and provided full 24/7 coverage of phone and radio plus a dispatcher on tactical channels during police and fire incidents.

Simultaneously, Miami Beach turned a lukewarm use of the Medical Priority Dispatch System™ (MPDS®) into a commanding performance that achieved medical ACE status in November 2018. Preceding the success was an intensive 11-month Medical Quality Assurance program overseen by three QA specialists. The QA program exceeded the state of Florida mandate to provide daily feedback and training to include public safety telecommunicator curriculum program and software tracking certification and CDEs to keep everyone in compliance. Paperless electronic systems added a go-green shine.

Technology enhancements weaved through the entire list of accomplishments. CAD software was updated, and a new mapping application was developed. A fire department automatic response function curtailed the dispatch of unnecessary units to fire and medical incidents. The phone system was upgraded, and a new public safety radio system was approved.

The public safety radio system expands coverage for police, fire, and ocean rescue. It increases the in-building communications capabilities of end users, and it provides dispatchers with real-time locations of police officers, firefighters, and all radio users through their portable radios.

And since the center handles fire, police, and ambulance, the next piece in the larger picture was a natural. Police and fire protocols went live in July 2019. COVID-19 may have complicated the goal of becoming a triple ACE, but it certainly did not stop the process. Miami Beach PSCD became the world’s 18th Triple ACE Accredited Center in early March 2020.

Call volume decreased though the virus added a dimension of high alert to protect staff and provide the assistance callers required. They implemented the Emerging Infectious Disease Surveillance (EIDS) Tool in ProQA® Paramount and Protocol 36: Pandemic/Epidemic/Outbreak (Surveillance or Triage), both of which were modified to deal specifically with the COVID-19 outbreak. Calltakers and dispatchers were divided between the Miami Beach PSCD main and backup center to limit exposure.

For Guerra, the ability to handle pandemic, hurricanes - and whatever comes their way - exemplifies everything the staff and center stand for.

“It takes drive and dedication and persevering in what needs to be done,” he said. “ACE is validation of the help we provide to our callers.”

Don’t hold your breath waiting for the Miami Beach PSCD to decide what to do now that so much has been accomplished. Plans are in progress to place the communication center in a secure location, one built to withstand hurricanes, and on a dedicated floor in a new fire station.

Emergency communications is a learning curve that never ends, Guerra said, and a major factor in why he stayed in the dispatch side of emergency services after his assignment to the City of Hialeah Public Safety Communications Division in 2006.

Less than two years after his arrival in October 2009, the Hialeah (Florida) center became an IAED™ triple-accredited emergency dispatch center. The three years (so far) in Miami Beach has mirrored the progress Guerra brings to his leadership in public communication.

In an article published in the Journal of Emergency Dispatch referencing Hialeah’s triple ACE, Guerra said quality improvement and assurance must be part and parcel to every decision, “not just for now but forever. Quality doesn’t just happen to come by, it has to be invited, and welcomed, and tended to, and made part of a center’s environment.”5

It’s the same philosophy at the Miami Beach PSCD. Establish a plan and get through it, making sure the right people are hired to get the job done. Don’t take anyone for granted.

“Talk to each individual on a daily basis,” he said. “Illustrate the good they’re doing. Create the positive environment you want.”

Florida is the home of eight medical, seven medical/fire, and two police ACEs. Miami Beach is one of three triple ACEs in the state and one of 14 triple ACEs worldwide.