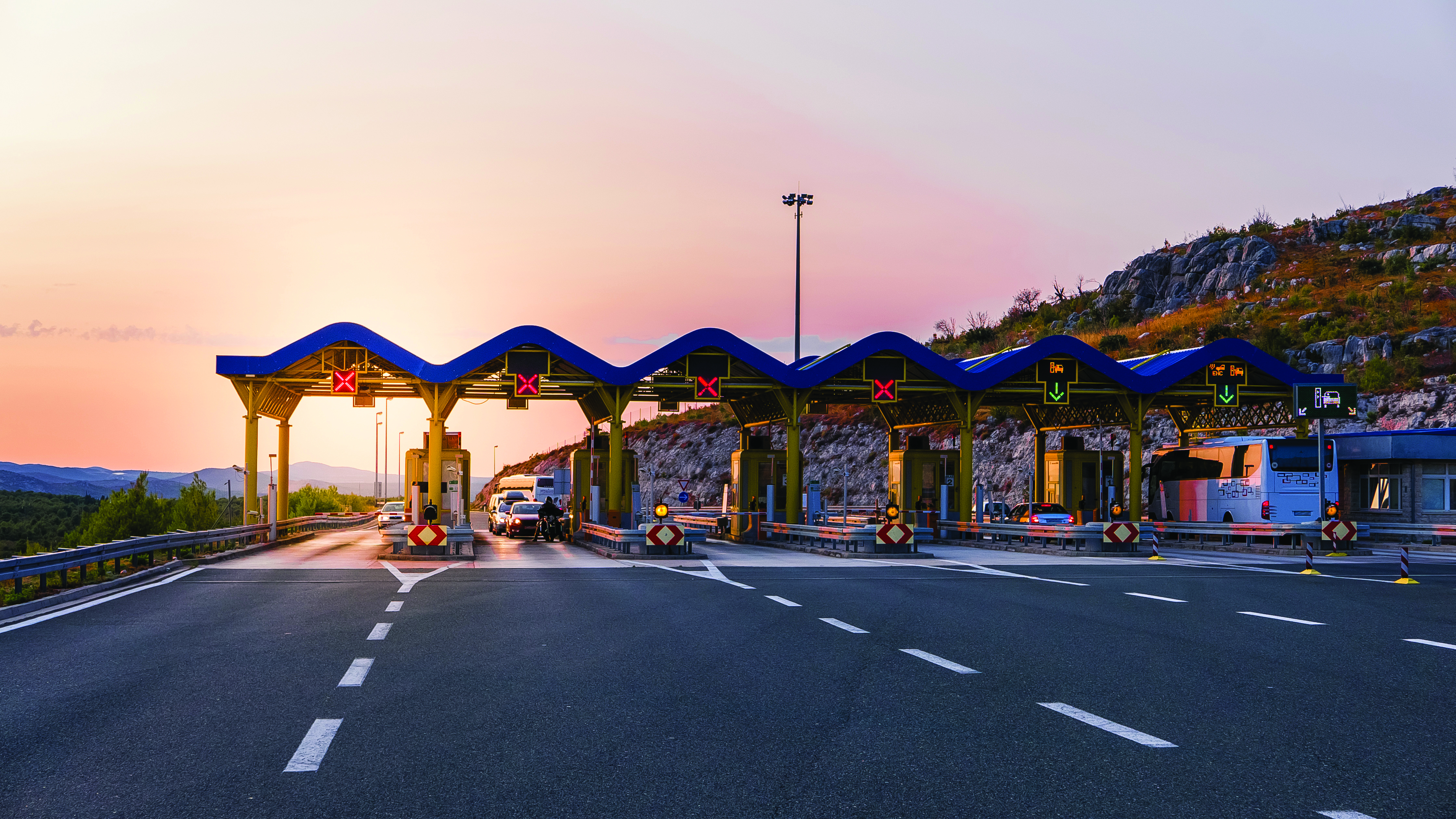 The shocking video is beyond dramatic.

The video should force you to look away but, instead, your attention is drawn to the torpedo-like motion and direction of the car heading directly toward its target (youtube.com/watch?v=TTAxs4kswkU). The force of the crash at contact—a toll plaza—violently spins the car and launches a passenger airborne. He crashes to the ground and comes to a stop facedown nearly 30 feet from the initial impact.1

While the video is authentic, the following scenario is fictitious and based on what might have been the caller’s answers to the EMD’s Case Entry Questions.

What’s the address of the emergency: State Route 91.

Okay, tell me exactly what happened: A guy just flew out of a car. It happened so fast. I heard a loud noise, and the next thing I know, I’m watching a guy fly outside a car after it hit the toll plaza.

Are you with the patient now: Yes, I'm right next to him. He slid into my tollbooth. He’s face down on the ground.

How many (other) people are hurt/sick: I don’t know. I can't see anyone else in the car from here. I’m standing with the guy on the ground. He looks hurt. His leg is twisted at an angle.

Is he awake (conscious): Yes.

Is he breathing: Yes.

In this example, what is your Chief Complaint? Is it Protocol 30: Traumatic Injuries (Specific) or Protocol 29: Traffic/Transportation Incidents?

Protocol 30 is appropriate for a person falling or being pushed out of a vehicle, provided there are no significant traffic accident concerns and the person wasn’t subsequently run over. In this case, the force of the crash ejected the passenger from the vehicle and his body came to rest at a tollbooth approximately 30 feet away from impact.

Therefore, the right answer is Protocol 29, which was designed more for mechanism of injury and scene safety issues associated with motor vehicle crashes and traffic rather than for individual patient injuries.

According to Brett Patterson, IAED™ Academics & Standards Associate and Medical Council of Standards Chair, “Specifically, ejection mechanism is related to the force of going through a windshield, and auto versus pedestrian is related to the discrepancy in mass of one versus the other.”2

According to Protocol 21: Hemorrhage/Lacerations, TRAUMA is a physical injury or wound caused by an external force through accident or violence. The external force may be blunt or sharp in nature. In addition to blunt and sharp mechanisms, there is the situation of thermal energy in the form of heat, cold, or chemical agent, which generates the heat or cold. With the event of more frequent war-like situations, blast injuries and other mass casualty events are more common from improvised explosive devices (IED).

A caller has a seizure on the roof and then falls 10 feet to the ground. Which protocol best handles this situation and why?

Selection relates to the Case Entry Rules (specifically Rule 2 regarding mechanism of injury) and the built-in fail-safes of the MPDS that safeguard the EMD when multiple Chief Complaints are initially present. Protocol 17: Falls is most appropriate because of the mechanism of injury (LONG FALL) and the potential for serious, underlying injuries. Note that the first question on Protocol 17 relates to the height of the fall, which helps to qualify the potential medical shunt to Protocol 31: Unconscious/Fainting (Near). This is qualified by (ground level) when either “Dizziness with fall” or “Fainted or Nearly fainted” is determined to be the cause of the fall.

“Ground-level falls are not likely to cause life-threatening injuries from a prehospital standpoint, especially when the patient is alert,” he said. “If the cause of the ground-level fall is medical in nature, the protocol automatically shunts the EMD to Protocol 31 to evaluate the medical cause, which is often more serious than the fall itself. In fact, many of these cases turn out to be cardiac arrests, simply because the caller only witnessed the fall, and not the prior loss of consciousness. If the cause of the fall is unknown, the ‘Arrest,’ ‘Unconscious,’ or ‘Not alert’ Determinant Descriptors on Protocol 17 provide the appropriate fail-safe. However, LONG or EXTREME FALLS have the potential to cause very serious, or occult (hidden), injuries that may not be recognized by the caller or even the responder, so knowing the mechanism of injury and coding the call appropriately is paramount.”3

[MPDS v13.2 contains a new law on Protocol 17 that relates to this: The fall is the “chicken” and the arrest its “egg.”]

Chief Complaints associated with mechanism of injury include:

Is the following parachutist injury a traumatic injury or a fall? The jumper jumps out of the aircraft, doesn’t fall out, has a fully inflated parachute, lands on ground but breaks an ankle, leg, etc. What is it? Traumatic injury? EXTREME FALL? He comes down at the regular rate of descent as other jumpers but just doesn’t land right.

Protocol 30 would be the appropriate choice, said Dr. Jeff Clawson:

“There are a zillion things that cause injuries to people (all you need to do is think of an amusement park and the potential of accidents there). This mechanism simply doesn’t equate to the same forces involved with an EXTREME FALL, and the specific injury is the reason for the call.

We don’t have a special protocol pathway for accidents involving falls from bicycles. The same goes for skiers. The spectrum of “Tour de France riders” through “kids on tricycles” cannot be jammed simply into a mechanism of injury format. Regarding velocity, we don’t assess on Protocol 30 how fast the boom on the forklift was going when it hit the worker in the back or the speed the skier was going in a downhill race, either. The protocol does, however, provide information about the severity of the injury in terms of the body area affected in much more detail compared to Protocol 29.”4

Trauma calls are among the highest frequency of calls received by emergency dispatchers.

In 2012, nearly 20 million EMS activations were reported to the National Emergency Medical Services Information System (NEMSIS) by 8,439 agencies located in 42 states and territories. Of the nearly 11 million 911 EMS activations reportedly treating and transporting a patient, the majority were attended by a paid EMT-paramedic (82%) employed by a fire-based EMS agency (25%) working in an urban area (53%). 911 communication centers most likely dispatched EMS for a "sick person" (14%), while providers most likely reported pain (26%) as the patient's primary symptom and "traumatic injury" (13%) as the likely cause.5

MPDS users record similar results to the NEMSIS-based study. Take the Wilton Volunteer Ambulance Service (Connecticut, USA). In 2017, they handled 63% medical calls compared to 37% trauma calls. The most common mechanism of injury for trauma calls was falls. The priority information is the location, the number of patients, the mechanism, and details about the mechanism that give an indication of the level of trauma.7

A caller reports that his buddy hit a tree while backcountry skiing. The patient is not alert, and his breathing is ineffective. The mechanism of injury (trauma event) indicates that a neck injury is possible. Should the EMD provide PAIs to open the airway (head-tilt method) considering the potential hazards of neck manipulation?

Yes, according to the EMD principle to protect life over limb. Rule 2 on Protocol 30 says “The head-tilt is the only recognized method of airway control in the PAI dispatch environment. When presented with a TRAUMA patient described as not alert with INEFFECTIVE BREATHING, the EMD should protect life over limb and open the airway.”

In a nonvisual dispatch environment, the airway should be opened without hesitation if breathing is INEFFECTIVE, even when the mechanism of injury indicates a neck injury is possible. The risk of exacerbating a neck injury is very low while the risk of death, without appropriate intervention, is very high.

However, when an unconscious patient’s breathing is effective, the trauma protocols mandate the use of the Breathing Verification Diagnostic and, when effective breathing is confirmed, link to X-3 where the patient can be monitored without moving the neck.