As rare as it is to get a cardiac arrest call, it’s even more rare to have one with a favorable outcome. Orange County Fire Rescue (Winter Park, Florida, USA) takes roughly 146,000 calls a year, and in November 2021, emergency dispatcher Stephanie Pockels took one such call.

Cliff Trossett was dropping off fliers at a country club when he collapsed. Nearby employees took action immediately, which included calling 911 and sending someone to bring an AED to the patient’s side. When she was brought into the situation via phone, Pockels kept the AED in mind as she asked the preliminary questions and kept checking to see if it had arrived. When it had, she went right into the instructions for its usage. It administered a shock—which could be heard in the background of the call—and Pockels directed the men to perform CPR, at which point the EMS crew arrived on scene (five minutes or so after the call was created). Trossett, who is in his 60s, had return of spontaneous circulation (ROSC) and was released after 15 days in the hospital.

“Stephanie changed directions so many times to adapt her instructions to what was happening,” said Frank Barth, QA Coordinator at OCFRD. “We’re awful proud of her.”

After Trossett was discharged, he attended a ceremony celebrating the work of Pockels, the club’s employees, and the other first responders, who all received lifesaving recognition awards. Pockels received hers from OCFRD Communications Division Chief Kimberly Stewart-Horan.

Barth, who evaluated 6,000 calls last year including the cardiac arrest save, says that Pockels has taken to dispatch like she’s been here for 20 years, even though she came to OCFRD from working at a supermarket only two years ago. Despite her short tenure, the administrative supervisor and management have already sent her to a class to become a trainer.

“When I listen to and evaluate calls, I know that when she answers the phone, the caller is in good hands,” said Barth. “She shows capability in her routine work, not just the big calls.”

OCFRD is one of the 20 agencies in Florida that uses the Priority Dispatch System™ and one of the even smaller number of Florida agencies that are multi-accredited (Medical and Fire). One of Barth’s first tasks when he was promoted to QA two years ago was to aid Communications Assistant Manager Julie Sitnik in completing the application for Fire accreditation, a difficult task made even more difficult by the fact that the center takes around 23,000 fire calls a year (versus their 123,000 annual medical calls). The population that the agency serves is 1.4 million people, although that number is blown up severalfold on a daily basis because its jurisdiction includes Sea World and International Drive, which is home to convention centers, large hotels, and outlet malls. They also provide municipal aid with Reedy Creek Fire, which is the fire department for the municipality where Walt Disney World sits.

Within the agency itself, there are six dedicated calltaking positions and six radio positions and two further positions that are available for extra calltakers during peak hours. Shifts are divided between a day and a night shift and, although OCFRD is understaffed like many, many other agencies across the world, they try to have at least six calltakers on duty 24 hours a day.

“We’ve been stepping up our effort in recognizing our dispatchers’ efforts on the floor,” said Barth, who has been with OCFRD for 20 years. “We like to champion the effort of our dispatchers for any difficult calls, even if the outcome isn’t favorable. To have one that ended in a saved life is just amazing and we want to highlight it.” 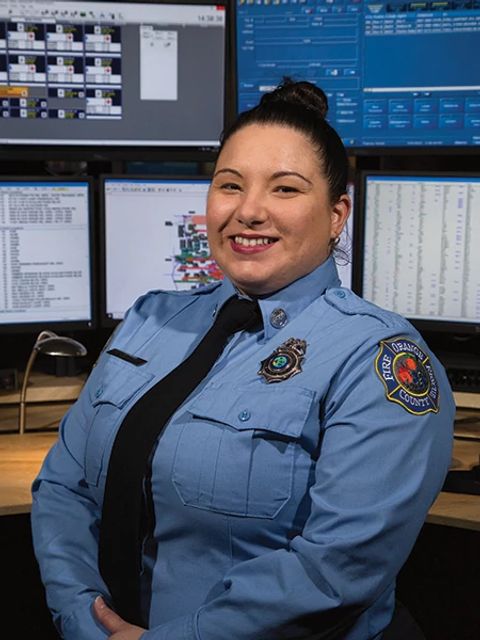