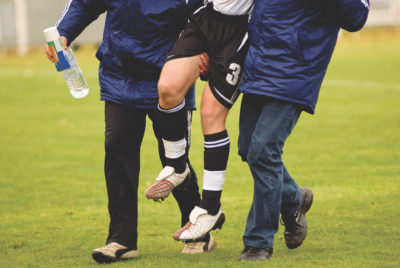 When autumn fills the air, so do the sights and sounds of popular sports. At the high school, college, and professional levels, American football is king in the United States. Starting in late August and continuing into early winter, football brings enormous participation. In February 2014, more than 1 million high school students participated in organized football and more than 14,000 U.S. high schools fielded teams.1

While many athletic contests occur without major injuries or incidents, a complete lack of accidents is unavoidable in any sport. In 2012, 1.35 million people ages 6 to 19 years old suffered sports-related injuries serious enough to send them to the Emergency Department (ED).3 Clearly, sporting incidents keep 911 dispatchers, emergency responders, and ED staff busy.

Different sports present various incidences of injury. For example, a football player has a much greater chance of suffering a concussion than a tennis player does; a soccer player is more likely than a swimmer to injure an ankle. High-contact sports produce more injuries than low-contact or no-contact activities, though no sport is immune to athletes getting hurt.

Ankle injuries are the most commonly reported sports-related injuries, making up 15 percent of all such incidents. Next up are head injuries at 14 percent, followed by fingers (12 percent), knees (9 percent), and facial injuries (7 percent).

Based on 2012 figures, the most common diagnoses for sports-injury ED patients are strains and sprains, with 451,480 such injuries. Fractures are second with 249,500, with contusions next up with 210,640. ED-diagnosed concussions due to playing sports were 163,670 in 2012. Lacerations and dislocations are other commonly ED-diagnosed sports injuries. A total of 11.5 percent of all female athletes seen in the ED are diagnosed with concussions; for boys, the figure for concussions is 7.2 percent.

Depending on the sport, serious injuries take place in a number of ways. In football, collisions are common culprits of concussions and other head injuries. In gymnastics and diving, falls can result in broken bones. Heat and cold exposure for outdoor sports such as football, soccer, rugby, lacrosse, skiing, cross-country, and track and field can also cause a number of issues. Exposure to hot temperatures can cause heat cramps, heat exhaustion, and heat stroke. Exposure to extreme cold can cause frostbite and hypothermia. Some of these conditions can be life threatening.

Protocol 30 is used when “the caller doesn’t follow the norm and describes a specific injury.”4 Generally speaking, injuries are a sub-complaint of a mechanism of injury (how the patient was hurt). However, this Protocol is commonly used for sports injuries where the injury itself is the primary complaint, rather than the mechanism.

The first Key Question of Protocol 30 is “Is there any SERIOUS bleeding (spurting or pouring)?” Note that this initial question is asked prior to the Arrest and Unconscious send points. This ensures that this information is available to the EMD, even if the Protocol dictates an early send and go to PDIs.

The DELTA-level codes are appropriate when the patient is in arrest, is unconscious or not alert, or has a chest or neck injury with difficulty breathing. A new DELTA-level code is available in MPDS v13.0 when there is “Evidence to suggest critical injuries from high-speed/high-impact incidents …” These cases call for a 30-D-5 Determinant Code, “HIGH VELOCITY impact/MASS injury.”

Key Question 3 and its associated subquestions are important to this Protocol because they help the EMD differentiate POSSIBLY DANGEROUS and NOT DANGEROUS body areas, which helps the EMD select the appropriate Determinant Code.

Two Rules on Protocol 30 could apply to sports-related fractures. First, Rule 2 states: “The head-tilt is the only recognized method of airway control in the PAI dispatch environment. When presented with a TRAUMA patient described as not alert with INEFFECTIVE BREATHING, the EMD should protect life over limb and open the airway.” When serious injuries affect a patient’s ability to breathe, the airway becomes the top priority, second only to scene safety concerns. Second, Rule 4 states: “Direct pressure on the wound should be avoided in the presence of visible fractured bone or foreign objects.”

Compound fractures also occur in organized sporting activities, and these fractures often cause minor bleeding. However, direct pressure on a fractured bone may cause more harm than good; it should not be applied unless bleeding is SERIOUS.

In early August, high school and college football teams across the U.S. begin what is commonly known as “Fall Camp” to prepare for the upcoming season. A longstanding tradition of these camps is to hold the dreaded “two-a-day” practices. As the name implies, camp players are required to attend two practices held on the same day. These usually take place, sequentially, for a week or two during the month of August, with practices typically held in the morning and then again in the evening.

Two-a-day practices normally include conditioning drills of running sprints, sit-ups and push-ups, and performing various exercises designed to increase stamina and raise fitness levels. In some areas of the U.S., temperatures soar in the 90-degree range, or even into triple digits during these physically draining practices.

If players are not properly hydrated or overheat, they stand a risk of suffering heat exhaustion or even heat stroke, a potentially life-threatening condition. Even well-conditioned athletes must take precautions during intense summertime practices. Four years ago, Yahoo News reported that between 2000 and 2012, 21 college football players collapsed and died during summer conditioning workouts.5 The New York Times pointed out that during a 20-year period ending in 2001, 40 high school football players died from heat stroke.6 Six high school football players died in 2011 from practicing in the heat of August and early September.7

Heat and cold exposure can threaten life,8 so it’s critical to treat these matters with seriousness and concern. Protocol 20: Heat/Cold Exposure handles these situations, although a word of caution is advised. Note Axiom 1: “Because a patient has a problem in a hot or cold environment does not mean the problem was caused by the environment. Heat or cold extremes may trigger other medical problems.”

Key Question 1 asks, “Does s/he have chest pain or chest discomfort?” If the caller says “yes,” Protocol 20 immediately shunts the EMD to Protocol 10: Chest Pain/Chest Discomfort (Non-Traumatic). Otherwise the Key Questions that follow on Protocol 20 are “Is s/he completely alert (responding properly)?” “Has s/he ever had a heart attack or angina (heart pains)?” “(Not 1st party) Does s/he have a change in skin color?” and “What is her/his skin temperature?”

If the athlete has suffered heat stroke, he or she will have red, dry skin with a decreased level of consciousness. Heat stroke victims can have temperatures up to 108 degrees or more, which can cause serious damage to the brain and other vital organs.9 Heat exhaustion, which is non-life-threatening, will present with cramping, pale skin, sweating, nausea, and vomiting. Heat exhaustion is common among athletes overexerting themselves when it’s hot and humid outside.

When the complaint is heat exposure, PDIs will advise removing the patient from heat sources, removing any outer clothing, and applying cool water to the patient’s skin while fanning. The EMD should also advise the caller to turn on a nearby fan or air conditioner, if possible. EMDs should be aware that heat- and cold-related problems can rapidly lead to a decreased level of consciousness, making airway compromise a real possibility.10

While not as common as heat exposure, cold exposure may occur during winter sporting activities conducted outdoors. Hypothermia and frostbite cause as much as 20 percent of all injuries to Nordic skiers and 3–5 percent to mountaineers.11 The frostbite of extremities and systemic hypothermia are of primary concern. The symptoms of cold exposure are similar to heat exposure and involve a change of skin color and, most seriously, a change in level of consciousness. Hypothermia can occur even at 50 or 60 degrees Fahrenheit.12 Treatment includes protection from the environment and a gradual return to normal temperatures.

A notable Rule (2 on Protocol 20) involving cold exposure patients states: “Unconscious, non-breathing hypothermia patients should never be considered an OBVIOUS DEATH by dispatch or on-scene personnel and should be initially coded 9-E-1.” This is because extreme cold exposure can slow the body’s metabolism so much that even trained rescuers may be fooled, as Axiom 4 explains: “Hypothermic patients can appear dead, even to trained rescuers. A person isn’t considered actually dead until they are ‘warm and dead.’“

Physically demanding sports where aerobic activity is high, such as in football, basketball, soccer, ice hockey, lacrosse, rugby, cross-country, track and field, and others, can be troubling for participants who suffer from asthma and other breathing conditions. A 2004 study conducted by doctors at St. Joseph’s Hospital for Children in Philadelphia, Pa., showed that over a 7 ½ year period, 61 confirmed asthma deaths in the U.S. occurred on the playing field. Basketball and track were the biggest culprits, but football, swimming, cheerleading, and other activities also had asthma-related fatalities.13

Not only are breathing problems common in sports-related calls to 911, but they are among the most prevalent of all public safety Chief Complaints. As an EMD, you should be aware that, according to Rule 2 of Protocol 6, “Breathing problems are potentially life-threatening until proven otherwise,” and, as Rule 3 states, “A patient having breathing problems may worsen at anytime.”

Along with asthma, emphysema and chronic bronchitis are primary causes of breathing problems. This trio of chronic lung diseases is known as Chronic Obstructive Pulmonary Disease, or COPD. The later two diseases primarily occur in older populations, but asthma affects both young and old alike, making asthma exacerbations, such as episodes of progressively worsening shortness of breath, coughing, wheezing, and chest tightness, a common complaint among young athletes who suffer from the condition.

Many athletes with asthma have a prescribed inhaler or nebulizer to help them manage their disease. As such, most asthma patients self-treat prior to seeking emergency help. This fact helps explain why many asthma patients are more likely to be seriously ill by the time they decide to call for help. Rule 5 of Protocol 6 warns, “Asthma patients are usually very experienced in managing their disease. When the status of these patients is reported as ‘Can’t breathe,’ ‘Unable to breathe,’ or a similar description, this should be considered INEFFECTIVE BREATHING.”

Unfortunately, common to sporting activities are traumatic injuries, metabolic issues due to environmental extremes, and respiratory emergencies primarily due to exacerbations of asthma. Fortunately, the MPDS helps EMDs deal with all of these emergencies with regard to both prioritization and patient care. Protocol 30 classifies traumatic injuries by Priority Symptom, mechanism of injury, and body area affected, and PDIs/PAIs are available for the minor to most seriously injured patients. Protocol 20 deals with environmental extremes encountered during sporting activities and considers potential, underlying medical issues. Protocol 6 helps the EMD deal with exacerbations of asthma among athletes. Familiarity with these protocols will ensure the appropriate care of patients involved in sports-related incidents.