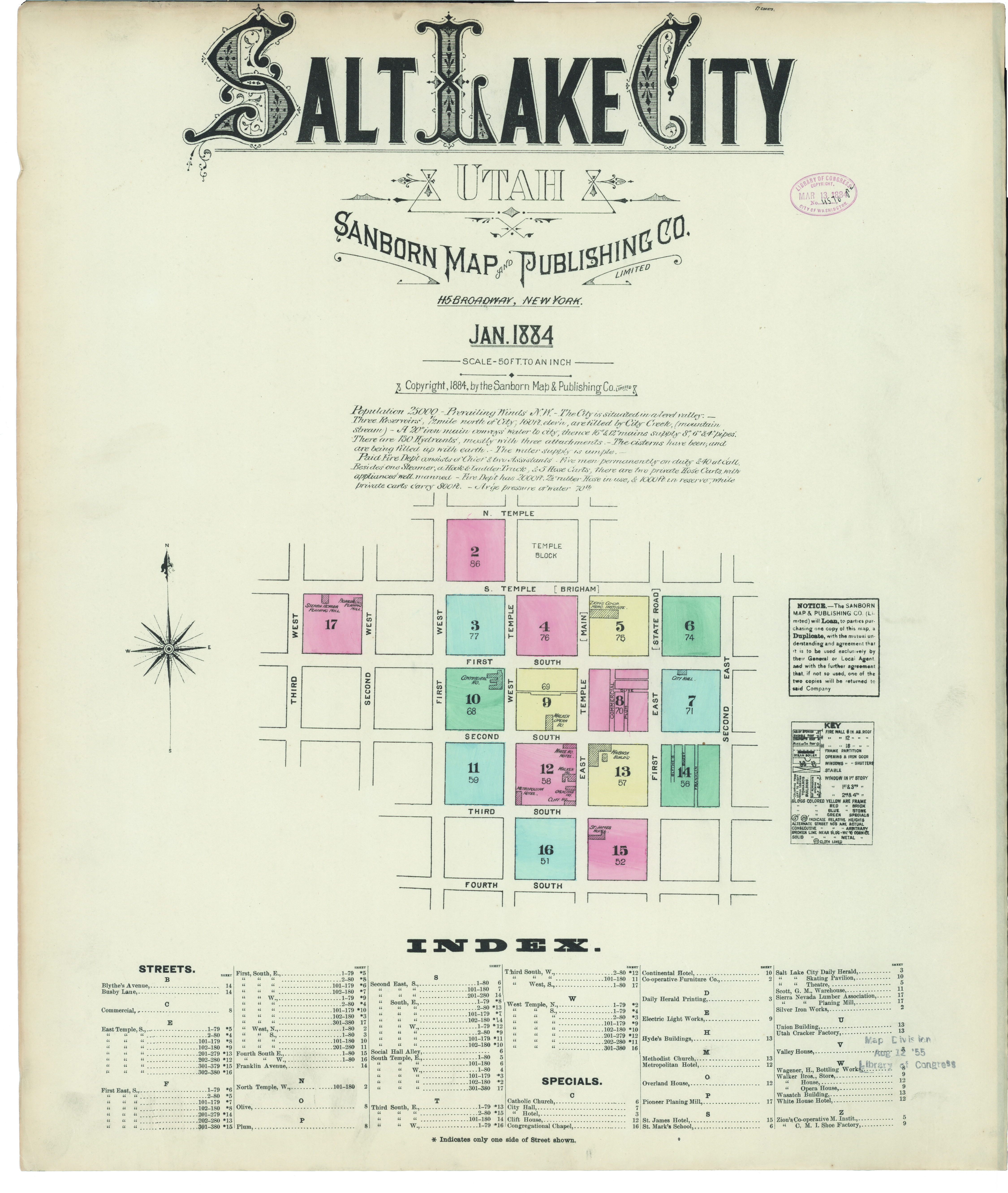 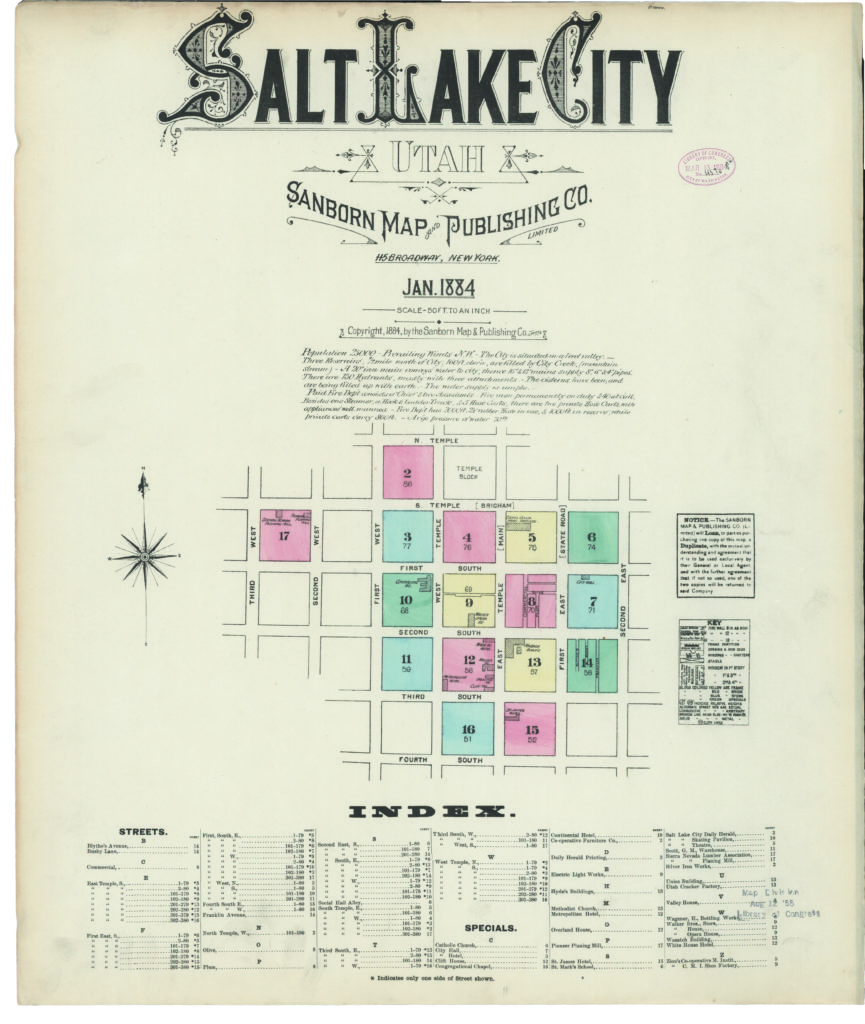 Five signatures to a Sanborn Fire Insurance Map of Salt Lake City, Utah (USA), was all it took. Seven years prior to statehood, the nearly mile-high city in the territory west of the Rockies was declared a great place for any fire insurance company to do business.

The year was 1889, and only during the past six years had the city paid firefighters to come a runnin’ at the sign of fire, rather than relying on volunteers (paid 25 cents an hour per call until demand for 50 cents an hour resulted in going to a less expensive paid force). Although private businesses and homes had the option of carrying fire insurance, a Sanborn map signed and stamped by a national insurance board increased buyer options.

The massive fire predicating a paid department was devastating, nearly incinerating an entire block of downtown Salt Lake City. On a summer day, when most of the volunteers were picnicking at the Great Salt Lake, a huge fireball exploded south of The Church of Jesus Christ of Latter-day Saints’ Salt Lake Temple. A 93-pound keg of gun powder had literally met its match at a wagon depot owned by Hiram Bradley Clawson Jr. Fire department volunteers undoubtedly saw the explosion, but only the distance was far too great for timely response.

Local news reported a shock so violent “that nearly every window and glass door in Main Street, a block down on either side, was completely destroyed, the sidewalks being literally carpeted in glass.”1 Clawson’s machinery and animal hide and wool business was a total loss, along with several other mercantile establishments (a church council house, a bakery, an art bazaar, and a furniture store). Incredibly, no one was seriously injured; about a dozen were bruised or cut from the force of the explosion and flying glass, and one man suffered a broken arm.2

Although the fire was the largest yet in Utah territorial history, Salt Lake City was also following national trends. The modern department with salaried personnel and standardized equipment became part of municipal administration only late in the 19th century (at the beckoning of fire insurance companies). Sanborn Fire Insurance Maps were created to assess fire insurance liability within state and territorial urban areas.

Sanborn surveyors meticulously documented these areas—building by building and block by block, in communities large and small. The detailed maps designated streets, property boundaries, structural types (down to storage sheds), building use, and they were color-keyed to identify construction (brick, stone, adobe, or a mixture of materials). Since their primary purpose was to assess risk, the maps also showed the location of water mains, hydrants, piping, wells, cisterns, and field storage tanks.

The 35,000 people living in Salt Lake City were clustered within a square-mile radius extending north, south, east, and west from The Church of Jesus Christ of Latter-day Saints’ temple and tabernacle. The series of Sanborn Fire Insurance Maps issued for the city in 1889 identifies the use of each building in a quadrant, such as church, school, shop, or residence. The business district, one block south of Temple Square and on either side of Commercial Street, was a domino game of dry good stores, apothecaries, saloons, banks, warehouses, a small Chinese community (stores, laundries, apartments, and restaurants), grocers, law offices, liveries, and machine shops. Prostitution was legal, and structures designated by “FB” (female boarding) were generally considered houses of “easy and paid persuasion.”

The current site of headquarters for the International Academies of Emergency Dispatch® (IAED™) was occupied by two buildings—a saloon and combination barber and jewelry shop.

The city extended its boundaries in 1889 through the advent of electric street cars to replace the often unreliable mule-pulled street cars. The city’s fire department was outfitted with two Silsby steam fire engines, a two-horse hose cart, two hand hose carts, and one hook and ladder truck (old but fully equipped) and all were regularly called out to extinguish fires. A second engine house was planned, along with the placement of multiple public alarm boxes.

Incidentally, an official inquiry failed to pinpoint the exact cause of the summer blast, and some were of the opinion it was the work of an incendiary. Eventually, it was the powder Clawson stored in a fireproof wagon that city fathers held responsible. Extensive personal losses (only a stock of wool survived the flames) precluded recovering any damages from him.3 Clawson estimated his loss at $30,000 with insurance covering about two-thirds. Total loss for the city was more than $100,000.4

On a positive note, a fire department was born out of the ashes of near disaster.

The last Sanborn map was published in 1977, but the old maps remain popular for historical purposes, particularly the genesis of urban planning. For more about Sanborn Fire Insurance Maps, check out a digital collection at loc.gov/collections/sanborn-maps available through the Library of Congress.