The rainfall was unusually heavy, another in a series of scattered thundershowers, and water from the deluge was coming up from the road and through the vehicle’s floorboard and rising. The 911 caller inside the vehicle was concerned for his safety particularly in relation to getting his two children out before—worst-case scenario—the flash flood continued to sweep the vehicle through the busy intersection.

EFD Tobreshia Horn, City of Atlanta E911 Communications (Georgia, USA), a subsidiary of the Atlanta Police Department, took control of the call she answered during her afternoon shift on June 28. Although this was her first water rescue call, Horn approached the call like she always does—with confidence and the Fire Priority Dispatch System™ (FPDS®) Protocols. A calming voice, she said, is requisite of the profession.

“The calmer I am, the calmer he will be,” Horn said.

She could hear the rushing water. Several rounds of scattered thunderstorms over the past two days had produced more than three inches of rain. Water puddled on roads and swept debris into storm drains. The visibility was poor. A vehicle’s windshield wipers could not keep up in contest against the sudden burst. Considering one foot of water can move a small car and two feet can dislodge and carry most vehicles, the driver was facing serious trouble as the water rose inside his car to the driver’s seat.

Following Vehicle in Floodwater PAIs, seatbelts were unbuckled. The water, though rising, had not affected the vehicle’s electrical system and the driver was able to open the front window and, as instructed, push through the opening and climb to the roof. He and the children were able to stay on the roof and out of the water. Horn heard sirens approaching in the distance. She disconnected at the audible contact between the driver and firefighters. Their rescue was a success. 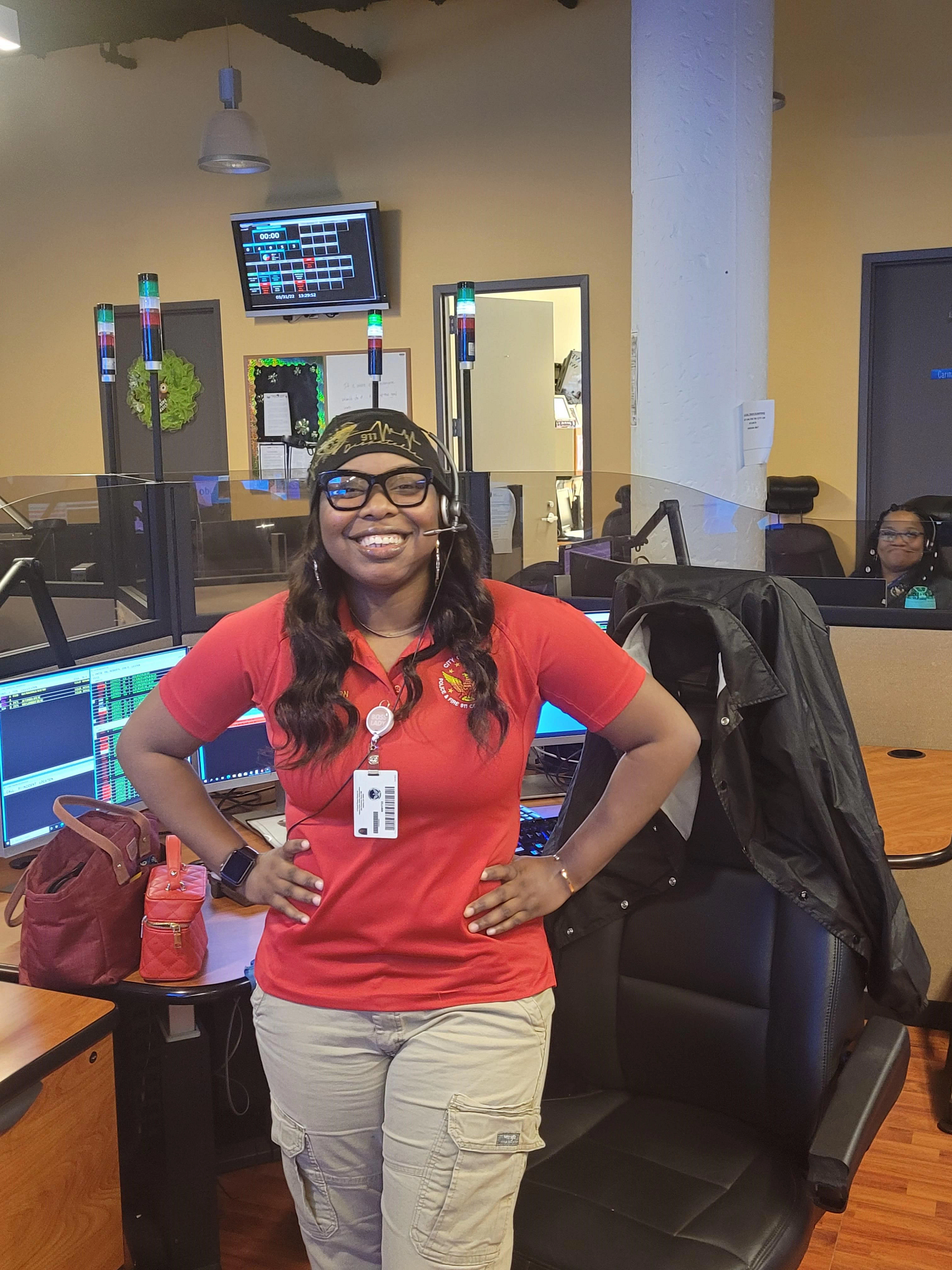 Horn said it’s confidence that carries the voice of calm in an emergency. There’s also the experience of two years in emergency dispatch—and working in children’s health prior to that—complementing her skill at taking control of a situation. Beyond that is a supportive team and her intrinsic nature. “I was born to do this, and the longer I am here, the more I realize how much I can help,” she said. “I’m able to help people every day.”

And the calm voice? The driver gave Horn a mighty thumbs-up. “Her calmness helped me get through it,” he said.1

Atlanta E911 Communications receives calls for emergency services resulting in dispatching police, fire, and medical resources. The center handles about 3,000 calls a day and a million calls a year and employs nearly 100 emergency dispatchers and calltakers. During the month of July, emergency dispatchers answered a total of 40,452 calls for service (33,840 calls for the Atlanta Police Department and 6,612 for Atlanta Fire Rescue) and 25 texts to 911. The center implemented FPDS in February 2022.

According to the IAED™ Data Center, FPDS Protocol 81: Sinking Vehicle/Vehicle in Floodwater recorded 1,773 cases between Aug. 19, 2019, and Aug. 19, 2022, with the highest call volume occurring in August and September during each of the years. ECHO ranks highest among the response levesl selected (62.76%), followed by CHARLIE (32.99%) and DELTA (1.24%). The Data Center receives EFD information from 116 agencies worldwide. FPDS v8.0 will include revisions to the Protocol that highlight changes in vehicle technology.