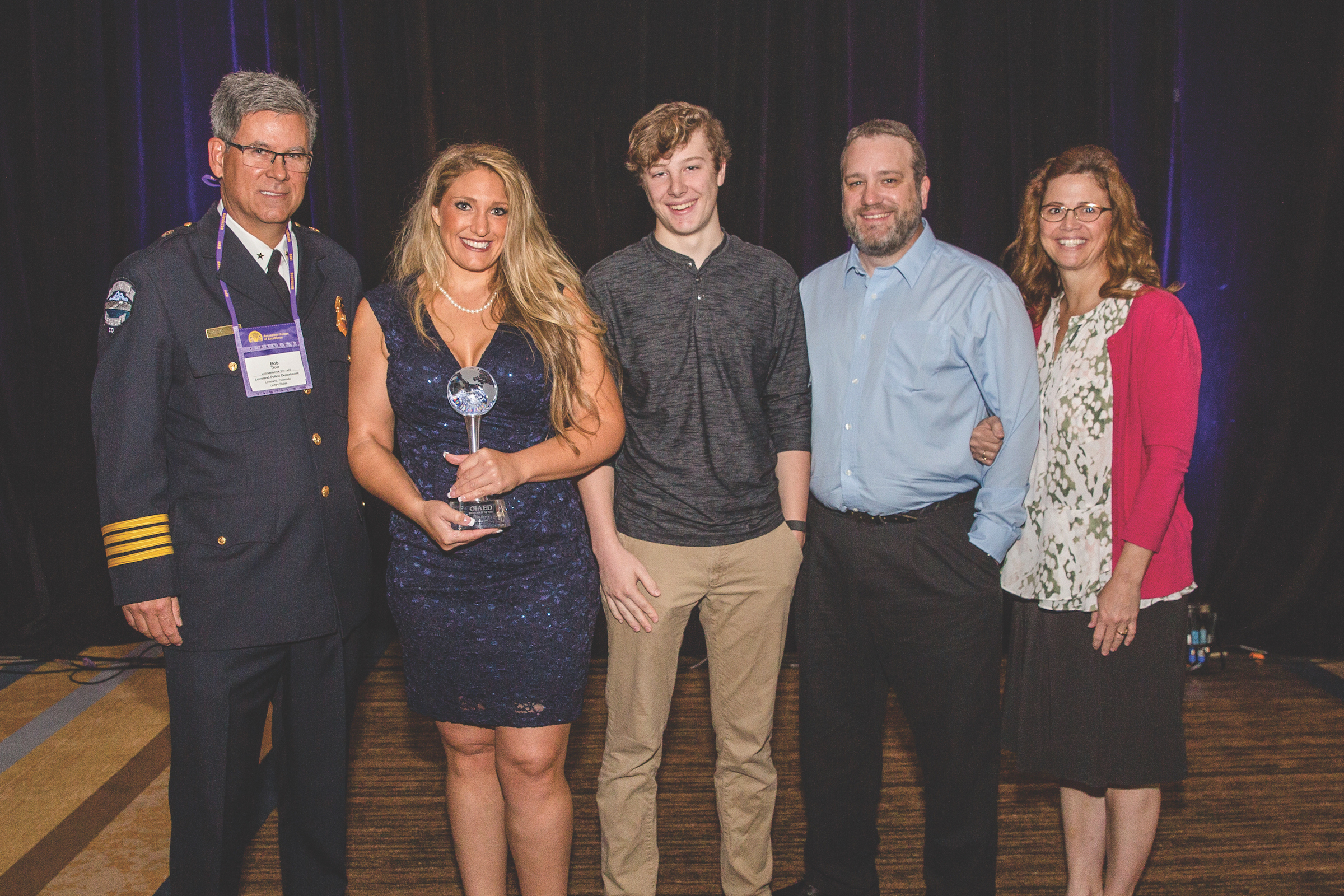 Erin Berry figured something was up when she recognized a family she had a met at the police department in Loveland, Colorado, USA, sitting in the front row at the NAVIGATOR Opening Session.

Berry was among 40 dispatchers nominated for the Dispatcher of the Year award, and Loveland Police Chief Robert Ticer had insisted she attend the conference held in New Orleans, Louisiana, USA.

Not that she would have turned down the invitation, and, yes, she did catch on to the possibility of receiving the award when 17-year-old Zander Kunselman and his father, Dirk, and mother, Shaudin, walked into the ballroom. Then, the call from September 2016 was broadcast to the nearly 1,400 communicators in the audience.

But to be named Dispatcher of the Year?

“I am truly honored,” said Berry, following the award presentation. “There are so many dispatchers from different agencies, and they all do an incredible job.”

Berry was recognized for her professional abilities exemplified by her first in the EMS chain of survival effort that led to the teen’s complete recovery. Zander, who was 16 at the time, collapsed while running laps on the practice track east of the high school. He wasn’t breathing, and he was turning blue. Tyler Royse, a member of the Crimson Regiment percussion section, and Loveland High School Resource Police Officer Bruce Boroski, performed CPR while others rushed to retrieve the AED inside the high school.

After the first shock, Zander’s pulse returned just at paramedics arrived to the field.

Berry closed the call, congratulating the team on the “really great job” they did for their friend. Zander spent two weeks in recovery.

NAVIGATOR wasn’t the first time Berry had the opportunity to meet Zander’s family. Shortly after the event, nearly 20 people who had helped save his life were honored at the Thompson School District Board of Education meeting. Zander was unable to attend; he was still recovering at the hospital.

While at that time the family declined to talk about the incident, Dirk was ready to address the audience at NAVIGATOR.

“September 13 [2016] might have been the worst day of our lives, but because of Erin, it turned out to be the best,” he said from the stage. “The hardest part wasn’t the call telling us what had happened, the drive to the hospital, watching the helicopter take off for the children’s hospital in Denver, or waiting. The hardest part for us was how we could say thank you for saving our son’s life. Thank you for all you do. Thank you for everything you continue to do.”

This was the second time in three years that Loveland Police Department dispatchers have assisted in saving the life of a high school student. In 2014, Tommy Lucero, then a freshman at Thompson Valley High School, collapsed on the baseball field after running at a team practice. Coaches were able to revive him following CPR PAIs over the phone and using the AED at the school.

“Tommy and I are friends for life,” Berry said.

Since then, the Lucero family and McKee Medical Center Foundation officials have worked to increase the number of AED units inside schools and in the community. Loveland Police Department and emergency dispatch are members of the “Heart Safe City,” designated by the American Red Cross.

Berry has been with Loveland Police dispatch for a total of seven years.

Ticer was sworn in as Loveland Police Chief in June 2016, appealing to the type of leader staff wanted, engaged and present, which is just what he was doing at NAVIGATOR.

“Erin is a perfect example of what we do for our community,” he said. “I’ve got a great department, and I really want them to know that I’m here for them.”