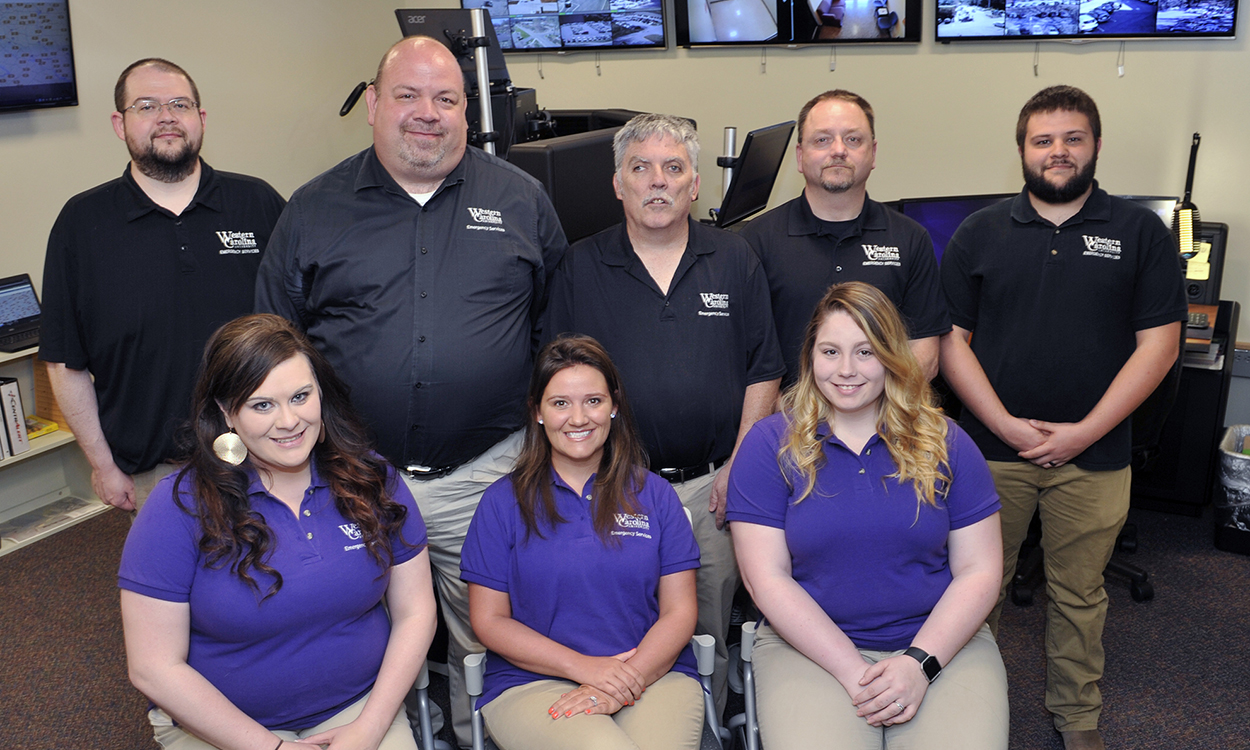 The H.F. Robinson Administration Building is your introduction to Western Carolina University (WCU) when approaching the campus in Cullowhee, North Carolina (USA), from the west.

Named for the former Chancellor H.F. "Cotton" Robinson, the building hosts the usual mix of departments and offices, such as Academic Affairs and Office of the Chancellor, plus a display that showcases the culture and history of the Appalachians and highlights the region’s contributions in music, crafts, and speaker events. The exhibit promotes the Mountain Heritage Center (MHC), also on campus in the Hunter Library.

The affiliated Mountain Heritage Day attracts thousands of visitors to the WCU campus during the one day it’s held in September. Local news accounts describe a day of frenetic waves of energy. Shuttles run from the festival’s start to finish, ferrying people to banjo making and corn shuck crafts, the Cherokee stickball game, timber sports, and the ultra-competitive cook-offs featuring recipes passed down for generations. Sweet potatoes, corn, apples, and molasses regularly showcase the regional palette. Mountain music never stops and neither does the clogging.

It’s a crazy day and by all reports, a cherished event celebrated on campus since 1974.

The day’s activities and crowds are viewed from a different perspective from the first floor of the H.F. Robinson Administration Building. That’s the home of the campus-based WCU Emergency Communications Center (ECC), and the first and only team of university-based emergency EMDs in the world to achieve ACE.

Most emergency communication centers share the same concerns—large crowds in a small space while also attending to non-event related calls—but for WCU it all happens in a relatively confined area. The two-square-mile campus is home to nearly 1,200 staff and faculty and a minimum of 10,800 students, with numbers expected to increase in the future.

The bulk of the population is the feature making campus communication a specialty within the profession, explained WSU Emergency Services Director Stephan “Shane” Stovall.

“They’re a rotating population,” Stovall said. “We replace the entire population every four to five years.” 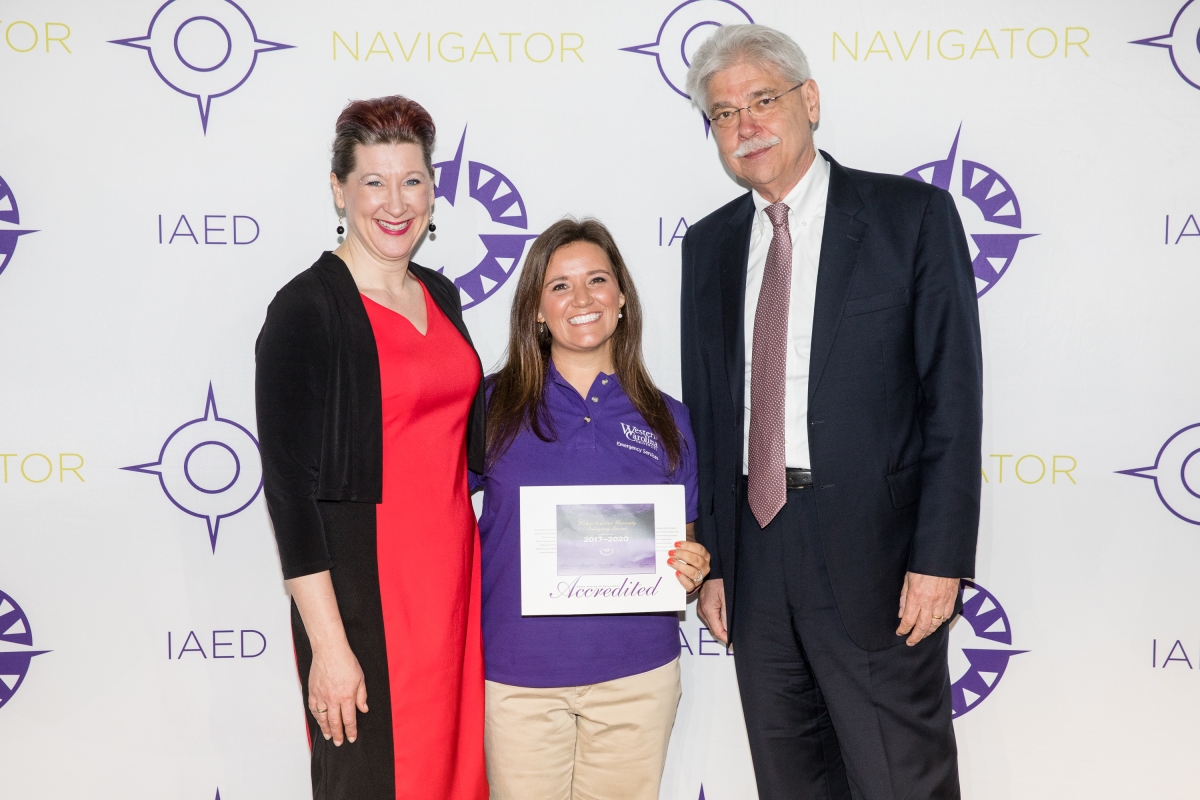 The Emergency Services Department is a stand-alone entity, separate from campus police dispatch, that oversees campus emergency management and public safety technology, as well as the ECC. The ECC initiates police, fire, and medical call responses and monitors the 500 security cameras on campus and 39 blue light phones that provide immediate access to police during an emergency. They process more than 30,000 medical and fire calls annually coming in from a variety of sources reflective of campus life: emergency and non-emergency lines, elevator phones, and outdoor and residence hall emergency call boxes.

The EMDs handle about 350 medical calls a year, and the calls are dispatched to the university’s BLS services, staffed by paramedic students, although more critical emergencies are dual-dispatched with local ALS services.

Considering the median age level (under 30 years old), the calls they receive are a contrast to centers in more urban areas.

The Medical Priority Dispatch System™ (MPDS®) arrived on the coattails of Nicholson and ECC Manager Thomas Hooks, both originally from centers using the protocols.

“The campus was growing, the calls were increasing,” Hooks said. “The trend is expected to continue, and we needed to establish certain standards.”

Dispatchers welcomed the change, Nicholson said. They liked having instructions and set questions. Their sense of security for callers increased, as did their confidence knowing the MPDS prepared them for what could happen.

“It was mandatory,” she said. “We had been talking about it from the start and waited until compliance was close to what we needed for accreditation.”

“Our response is two minutes at the most,” she said. “You can’t always get through all of the PDIs or PAIs before the ambulance arrives.”

They also made sure everyone was on the same page, including campus police and EMS. They put up booths on campus to notify students of the emergency dispatch process.

“They set a really high goal to be the first university accredited,” she said. “They had some setbacks, but they were positive and made the changes necessary.”

The day they received notice of achieving ACE was cause for their own celebration.

“We worked very hard to do this,” said Nicholson, who led the ACE charge. “We’re really proud of the accomplishment.”

Stovall said the level of excellence ACE signifies is important to them.

“The ACE shows our concern for consistency in the way we treat our callers and the efficiency of our center,” he said.

The center continues its forward motion. Staff trains constantly for incidents besetting places where large numbers of people congregate, such as active assailants. They practice drills for a fire in a dorm or hazards that could potentially lead to campus evacuation. The Police and Emergency Services departments collaborate on a daily basis.

For example, if either department determines an “immediate threat to the health or safety of the students or employees” exists, the WCU Alert System and Emergency Notification Systems are activated, and an emergency notification is sent out to the campus community.

“We take everything into consideration for the safety of our students and staff,” Stovall said. “We can’t be complacent on campus. Not at all.”