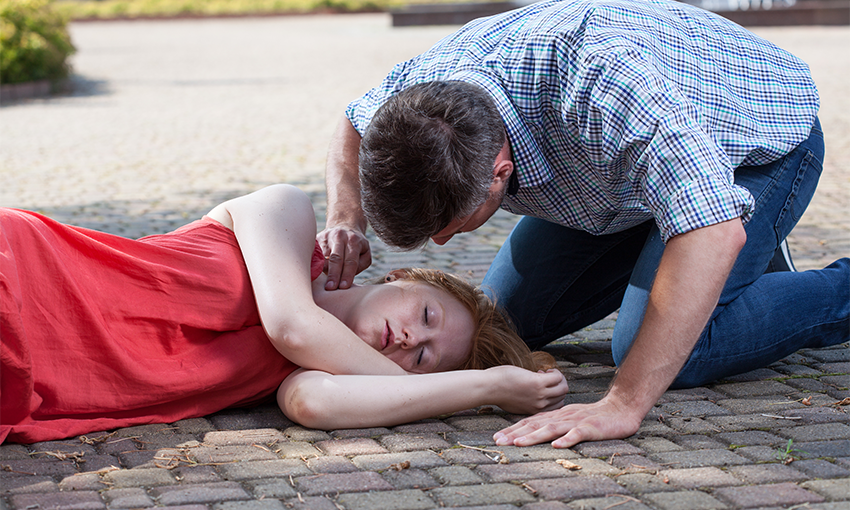 Protocol 31: Unconscious/Fainting (Near) is one of the most frequently used protocols in the Medical Priority Dispatch System™ (MPDS®). In North America, about 7.5% of all MPDS cases are handled on this protocol, which makes it slightly more frequent than Protocol 10: Chest Pain/Chest Discomfort (Non-Traumatic), and somewhat less frequent than Protocol 6: Breathing Problems.1

Protocol 31 covers a wide range of conditions, including patients who may turn out to be in respiratory or cardiac arrest after a breathing evaluation, and problems that are much less serious, such as a single fainting episode brought on by a brief period of physical or emotional stress.

In determining when to select Protocol 31, the EMD must start with a good description of the problem in Case Entry—and as always, this begins with “Okay, tell me exactly what happened.”

Common caller descriptions used for unconscious or fainting/near fainting patients include unresponsive, nonresponsive, won’t wake up, out of it, fell out, passed out, fainted, possibly fainted, looks like he’s going to pass out, etc. For any patient that is described in this way,  the breathing question in Case Entry becomes crucial. For 1st and 2nd party callers, a “Yes” answer to the question “Is s/he breathing?” is the only answer that should prompt the EMD to select Protocol 31 (See Rule 1, Protocol 31).

A “No,” “UNCERTAIN,” or “INEFFECTIVE/AGONAL BREATHING” answer requires selecting a Chief Complaint that either contains an ECHO code for Arrest, or in the case of safety issues, a protocol with safety questions that will likely lead to an arrest code, or the seizure protocol (Protocol 12) in cases where seizures are clearly described by the caller (see Rule 3, Protocol 31).

Note that the unconscious patient with UNCERTAIN breathing—one where the 2nd party caller cannot determine breathing for sure—is treated immediately as a cardiac or respiratory arrest—not on Protocol 31. Selecting Protocol 31 in such a case could delay the use of the necessary CPR instructions when early Dispatch Life Support is imperative.

Another important principle to note about Chief Complaint selection is when unconsciousness is associated with a known underlying cause such as injuries, diabetes, overdose, seizures, allergic reaction, etc. In general, the EMD will select the Chief Complaint that is specific to that underlying cause, instead of Protocol 31. One notable exception to this principle is Protocol 28: Stroke (CVA)/Transient Ischemic Attack (TIA) where complete unconsciousness from stroke is handled on Protocol 31, while a Not alert (but conscious) stroke patient is handled on Protocol 28.

Causes of unconsciousness, fainting, and near fainting

One of the reasons this protocol is so frequently used is due to the wide range of underlying causes that can lead to sudden changes in consciousness. Heart, lung, and neurological conditions—some temporary and benign, some more lasting and serious—are all typical causes.

Vasovagal syncope is the most common cause of fainting and is generally not serious in normally healthy persons. It occurs when there is a temporary reduction in blood flow to the brain due to a sudden drop in blood pressure and/or heart rate. It results in a temporary loss of consciousness and can be triggered by any number of stimuli, such as standing up too fast, physical stress, dehydration, and emotional stress.2

In most cases of vasovagal syncope, a brief fainting episode is followed by a rapid recovery period where the patient becomes awake and can respond normally. Barring any complications identified in the Key Questions, these patients can be assigned an ALPHA level and do not require a rapid EMS response or advanced level care. However, there are several complicating factors that can lead to assigning a higher Determinant Level to a fainting case. A cardiac history in patients age 35 and older creates an added risk, as does fainting in females in their childbearing years with abdominal pain due to the possibility of ectopic pregnancy. Also, breathing difficulty and skin color changes can be indicators of a more serious underlying condition.

Protocol 31 is actually used more often for conscious patients than unconscious patients; in fact, about two-thirds of Protocol 31 patients are reported as conscious in Case Entry. Why? The high frequency of fainting and near fainting episodes. This results in a substantial number of ALPHA and CHARLIE level cases assigned (roughly 16% and 23%, respectively).3

In some cases, unconsciousness can be life-threatening, and the EMD must be prepared to identify and manage these cases with proper Dispatch Life Support (DLS). Cardiac and respiratory arrest are both possible, even when the Case Entry breathing question is answered “Yes,” which as mentioned earlier, is a requisite condition for using Protocol 31 in 1st and 2nd party cases.

A Key Question on Protocol 31 asks, “Is her/his breathing completely normal?” For any patient that is now unconscious, this question will determine the need to use the Breathing Verification and Diagnostic Tool.

There is a widespread misconception that all unconscious patients with abnormal breathing are considered in arrest and should receive immediate chest compressions (e.g., the NO-NO-GO approach). This is not true. Indeed, about two-thirds of the patients handled on Protocol 31 where breathing was reported as not “completely normal” demonstrated an elevated or normal breathing rate once the EMD completed the BVDxT.4 Not only are chest compressions the incorrect treatment for these patients, instructing the caller to perform chest compressions causes the EMD to withhold critical airway instructions when the patient most needs them—before the responders have arrived to establish a patent airway—putting these patients at increased risk for arrest.

Use of the BVDxT is generally simple and reasonably fast with most 2nd party callers; however, about 11% to 14% of the time the caller will not be able to complete the breathing evaluation.5 In those cases, the unconscious patient must be considered as having INEFFECTIVE BREATHING, coded as a 31-D-1, and treated as an arrest.

One of the biggest risks for the unconscious patient is loss of airway control. This can lead to positional asphyxia—a well-known cause of death in the prehospital environment—which is a reversible condition if the EMD and the caller work together to properly position the patient and open the airway in time. For this reason, the EMD must always provide 2nd party callers with airway control instructions for any patient who is unconscious and still breathing, and any conscious patient who is unstable or worsening and may become unconscious imminently (see Rule 2, Protocol 31). The Unconscious DLS Link includes airway control instructions for these patients. These instructions include laying the patient flat on her/his back, removing anything from under the head (pillows, blankets, towels, etc.), and tilting the head back. In many cases, opening the patient’s airway until the field responders arrive is enough to save a life (see Rule 5, Protocol 31).

Shunts to Protocol 31 from Protocol 17: Falls

It is not uncommon for the EMD to handle a case where the Falls Protocol (Protocol 17) is selected initially, then once it is determined the patient has had a ground-level fall due to fainting or near-fainting, the MPDS sends the EMD to Protocol 31—and when ProQA® software is used, this happens automatically (see Rule 4, Protocol 31). This is done because ground-level falls due to fainting (or near-fainting) often have underlying medical conditions that must be evaluated by the EMD—the most serious of which carry more risk than most potential injuries sustained in a ground-level fall. The IAED is currently studying these shunted cases to determine if potential ground-level fall injuries need further evaluation by the EMD, but for now the evidence suggests the shunt is the safest course of action.

Protocol 31 provides the EMD with several challenges, including a wide range of conditions from simple fainting to cardiac and respiratory arrest, providing potentially lifesaving airway control or CPR Dispatch Life Support, to keeping the caller on the line for unstable patients, to provision of routine Case Exit information. Focusing on breathing status not only in Case Entry but throughout the case is imperative. Being aware of the need to keep the caller on the line with any sign of patient deterioration is also of prime importance. Listening carefully to the caller and getting a complete understanding of the situation in front of them will allow you, the certified, well-trained EMD, to provide exceptional care to all your patients.