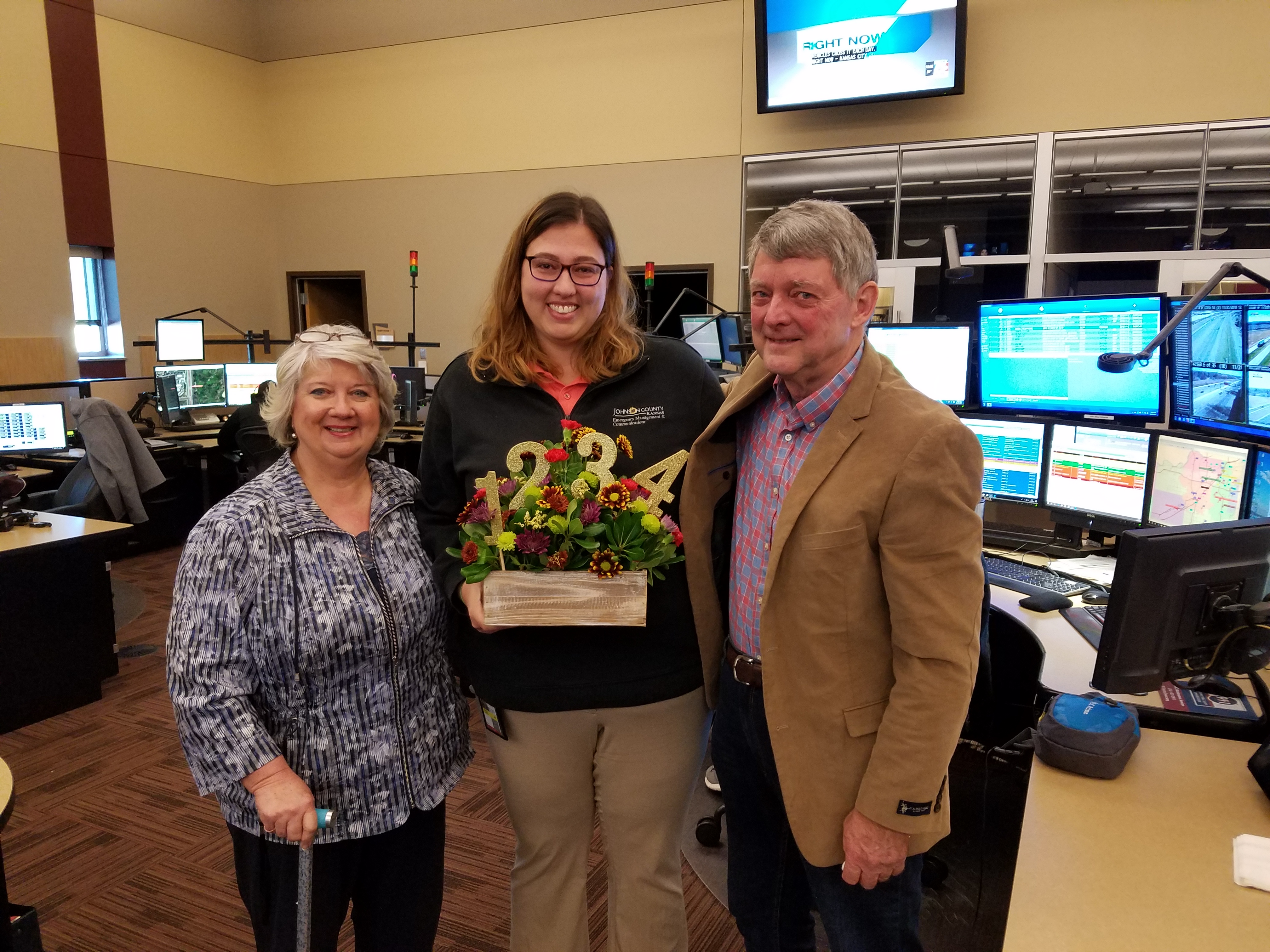 A Push in the Right Direction

Yet, despite the difference CPR can make, global bystander CPR rates vary between 5% and 80%. Most people don’t know how and haven’t been granted the chance to learn. That’s why Oct. 16 is set aside as the international Restart a Heart Day to recognize the vital importance of knowing the simple steps to save a life: Call 911 and push hard and fast on the center of the chest.

Restart a Heart Day had its beginnings in 2014 as an initiative to make CPR education mandatory in the U.K. secondary curriculum. During the next four years, the paramedic behind the project—Jason Carlyon—smashed a 100,000 milestone, charting a record 105,000 secondary school children in Yorkshire, U.K. trained in CPR by Yorkshire Ambulance Service (YAS) ambulance staff and volunteers. Carlyon is the YAS Clinical Development Manager and National Restart a Heart project manager for the Resuscitation Council (UK) (RCUK) that, in 2018, launched an international Restart a Heart Day resulting in an amazing 238,793 people trained on that one day.

This year marks the second annual worldwide edition to create the awareness that anyone can learn CPR and, according to the official Restart a Heart Day website, “facilitate BLS courses in schools and public locations.” The Resuscitation Council (UK) along with the British Heart Foundation, British Red Cross, St John Ambulance, and Yorkshire Ambulance Service are working together to generate interest and action and planned events are coming in from all directions: Austria, Belgium, Denmark, Italy, Malta, Slovenia, Spain, the Netherlands, the U.K., and Australia.

Salt Lake City, Utah (USA), will join the ranks this year as possibly the first city and state in the U.S. to join the international effort. The International Academies of Emergency Dispatch® (IAED™), the Utah American Heart Association (AHA), and University of Utah Health are co-sponsoring the inaugural Restart a Heart event to help place saving a life into the hands of as many people as possible, regardless of age.

We look forward to making Restart a Heart Day an annual tradition in Utah and helping to not only broaden the scope here but also encourage similar events throughout the U.S.

Remember, working together can make a difference. Learn to become somebody’s hero today.

The infant’s body was limp, and he was not responding to his mother’s voice. She did not know the amount of time elapsed since her baby had stopped breathing and the call from a neighbor’s house to 911.

“I didn’t know the down time,” said EMD Chris Watkins, Vancouver Island Dispatch Operations Centre, British Columbia Ambulance Service. “But that doesn’t really matter, except that it’s very rare to resuscitate an infant in cardiac arrest. We try all the same.”

It was late afternoon in November 2018 when Watkins answered the call from a mother who found her two-month-old infant unresponsive during a nap. Watkins launched the medical ProQA® Fast Track pathway to Pre-Arrival Instructions with the mother and the neighbor outside on the front porch. They had provided three cycles of two breaths to 15 chest compressions.

“The baby started to cry,” Watkins said. “That was so fantastic. It was exceptional.”

The British Columbia Ambulance arriving on scene stabilized the infant prior to whisking mom and the baby to the pediatric center in Victoria. While Watkins does not know the cause of the infant’s cardiac arrest or the outcome, he was cautiously optimistic considering the apparently successful resuscitation.

Watkins started in EMS 13 years ago as a paramedic and continues to crew ambulances while also, for the past six years, working full-time in emergency dispatch. His first on-scene call as a paramedic was a patient who had gone into cardiac arrest after choking on a piece of food. He started CPR while a second paramedic used forceps to dislodge the obstruction. Subsequent shocks with an AED returned spontaneous circulation.

“This was so powerful,” he said. “We took someone who was clinically dead and brought her back to life. That was amazing for me. This is what I wanted to do.”

Watkins transferred to emergency dispatch for reasons he calls superficial (such as working closer to home) and has since discovered the challenge and pace suits him well.

Comparing ambulance to dispatch, however, he said is apples to oranges. His paramedic background adds to situational understanding in a nonvisual setting, but that said the two don’t share the same dynamics.

“In here, we’re handling so many different things at one time, and we take hundreds of calls in a day,” he said. “We don’t know what will happen next. We stick to the Protocols and that’s what ultimately directs our choices.”

Brock’s Law. Those are the first words that came to EMD Dionne Van Wijk when she answered a call involving a boy who had collapsed during gym class.

Teachers placing the call from Southern Okanagan Secondary School, Oliver, British Columbia, in February 2019 said his nose was bleeding. He wasn’t awake. They indicated he was breathing, which to Dionne Van Wijk, Kamloops Dispatch Operations Centre, BC Ambulance Service alerted her to the use of ProQA® Breathing Verification Diagnostic tool. The tool showed that he was not breathing effectively. She started CPR, giving Pre-Arrival Instructions to one teacher while instructing a second teacher to get the AED.

“Brock’s Law flashed through my mind,” Van Wijk said. “In that moment, I knew I had to make sure they got the AED and they would use it correctly.”

Van Wijk read the scripted AED instructions and after two shocks, BC Ambulance Service paramedics were on scene. The call was disconnected. Van Wijk took a five-minute break for some fresh air and then it was back on the floor. That night, she received a call from a member of the BC Ambulance Service Critical Incident Stress (CIS) team. She told the person she was doing fine.

It wasn’t until the next day that Van Wijk learned the teen had survived. One week later, she saw his picture in the news. He was sitting up in his hospital bed, smiling. She was invited to an awards ceremony at the secondary school, as an attendee expecting only to meet the two teachers receiving the BC Ambulance Service Vital Link Award. The boy was in recovery following heart surgery and unable to attend.

“I was happy to go,” she said. “Meeting the teachers was award enough for me.”

Even better, she said, was the teacher who thanked Van Wijk for “being there for us.” The teacher credited Van Wijk for a calming influence that allowed them to focus. The ceremony—which recognized everyone involved—was followed up with news interviews and her nomination for IAED™ Dispatcher of the Year 2019.

And it all happened (the call and ceremony) less than six months since her November 2018 hire date at the operations center. Van Wijk was on the floor in training with her assigned precept. The precept listened in while she handled the call.

Van Wijk said EMS is not something that happens in isolation.

“This is a real great example of the system working together,” she said. “He survived. He would live his life. He could be a kid. We all feel good about that.”

Brock’s Law is named in honor of Brock Ruether, an athletic 16-year-old in Alberta, Canada, who collapsed from sudden cardiac arrest during high school volleyball practice. An AED that could have saved his life was brought to his side and never used. The law in the Medical Priority Dispatch System™ states: “The presence of an AED does not ensure its use—the EMD does.” Brock’s mom, Kim, is dedicated to public education on SCA and AED access. 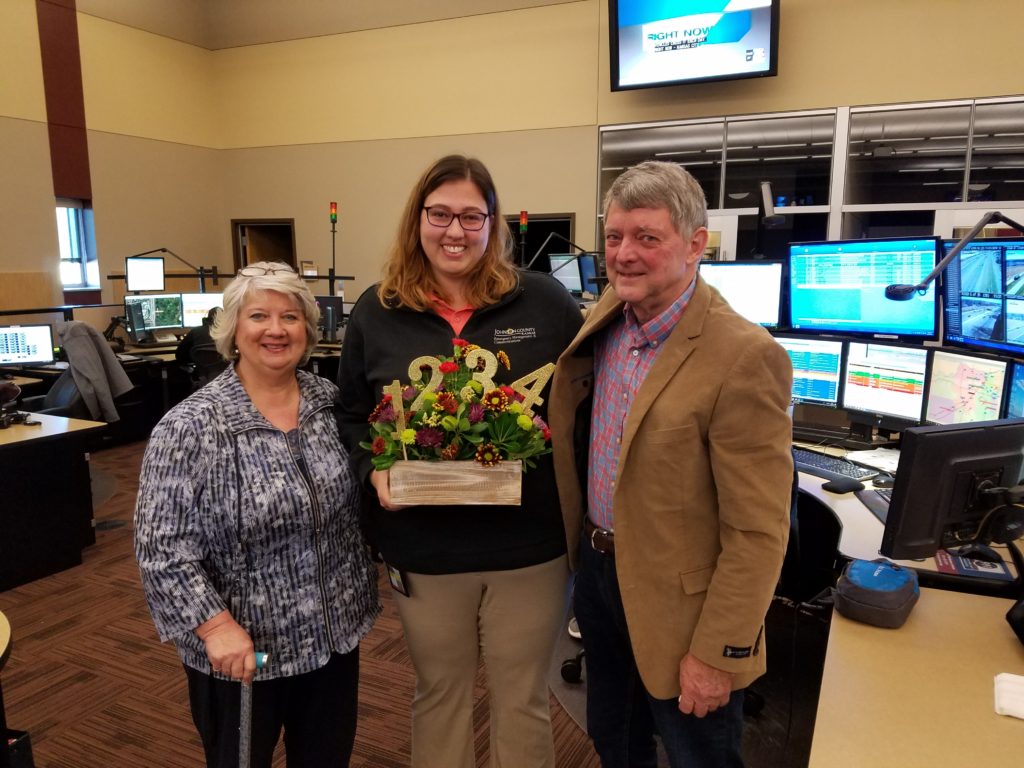 What would you do if given a second chance?

Paul and Diana Nickel didn’t spend a lot of time considering their options. They grabbed the chance and went full steam in a direction never anticipated before 7:24 p.m. on Thursday, Nov. 8, 2018.

The Nickels were holding down the fort at the home of their son Brian and daughter-in-law Melissa in Olathe, Kansas (USA), while the younger couple were out celebrating their anniversary. Diana had sliced ice cream cake for grandchildren Kate and Molly, and Paul was getting the good night book off the shelves.

Paul’s plans were short-lived. He heard a thump. Diana had collapsed onto the floor. Her eyes were open but glazed. Paul started CPR—using a form learned 40 years earlier in a certification class—and called 911. EMD Ashley Yockey, Johnson County Emergency Management and Communications Center, Olathe, Kansas (USA) went to the Medical Priority Dispatch System™ (MPDS®) Fast Track and for the next seven minutes counted out loud the compressions of hands-only CPR for Paul.

From Yockey’s assistance forward came the “miracles” the Nickels credit for saving Diana’s life, giving the couple a second chance and allowing them to celebrate their 45th anniversary, knowing that day in November could have ended up much differently. They are still here together.

Diana was clinically dead when another link in the chain of miracles occurred.

Johnson County EMS Director Ryan Jacobsen, M.D., followed up on an alert from the beeper he generally turns off while at home. He lives close and took off immediately, finding the home in a blizzard due to an additional step taken by one of the grandchildren.

“I had asked her to unlock the door [per Yockey’s PAIs] and if she hadn’t opened it, he would have had eight houses to choose from on the cul-de-sac,” Paul said. “He took the one with the light coming through the door.”

In moments, EMS/fire and police responders were assembling in the living room.

Two firefighters led Paul into the next room, away from the scene. Diana’s prognosis was not good. She was placed on a gurney beneath a mechanical CPR machine that repeatedly compressed her heart. She was shocked seven times. Forty minutes passed when Dr. Jacobsen determined it was time for the “Hail Mary” (final attempt) of resuscitation—double sequential defibrillation. One AED was placed on her chest, another on her back.

Paul kissed his wife and said goodbye. Chances of survival were slim.

Twelve days later Diana walked out of cardiac rehab. She was still recovering from broken ribs and sternum but otherwise in solid condition. No neurological damage. A slight spell of amnesia from the contusion to her face from the fall.

So, what do you do when you beat a 1% chance of survival?

“You don’t eat an ice cream cone and say, ‘that’s great’ and go on from there,” Paul said. “We had a story to tell and the objective to help others.”

The Nickels made it a priority to visit and sincerely thank Yockey, Dr. Jacobsen, and the entire response crew, and were surprised to discover that they were among few to ever express appreciation. They located a local pastor who had prayed for Diana that night and appeared in the one vision Diana recalls (aside from remembering the color of paint on the kitchen ceiling).

Devout Christians, they have accepted many invitations to talk at their local churches. Paul was CPR certified in July 2019. They push for AEDs in schools, churches, and public buildings. They applaud every link in the chain of survival. Diana was among five sudden cardiac arrest (SCA) survivors at an event sponsored by HEARTSafe, a program promoting survival from out-of-hospital SCA.

They will never know why Diana was given a second chance, any more than there is a definitive answer to why she experienced an SCA. They simply rejoice in the miracle of life and their opportunity to give back.

“It’s been quite a journey,” Diana said. “Beautiful and, at the same time, humbling.”