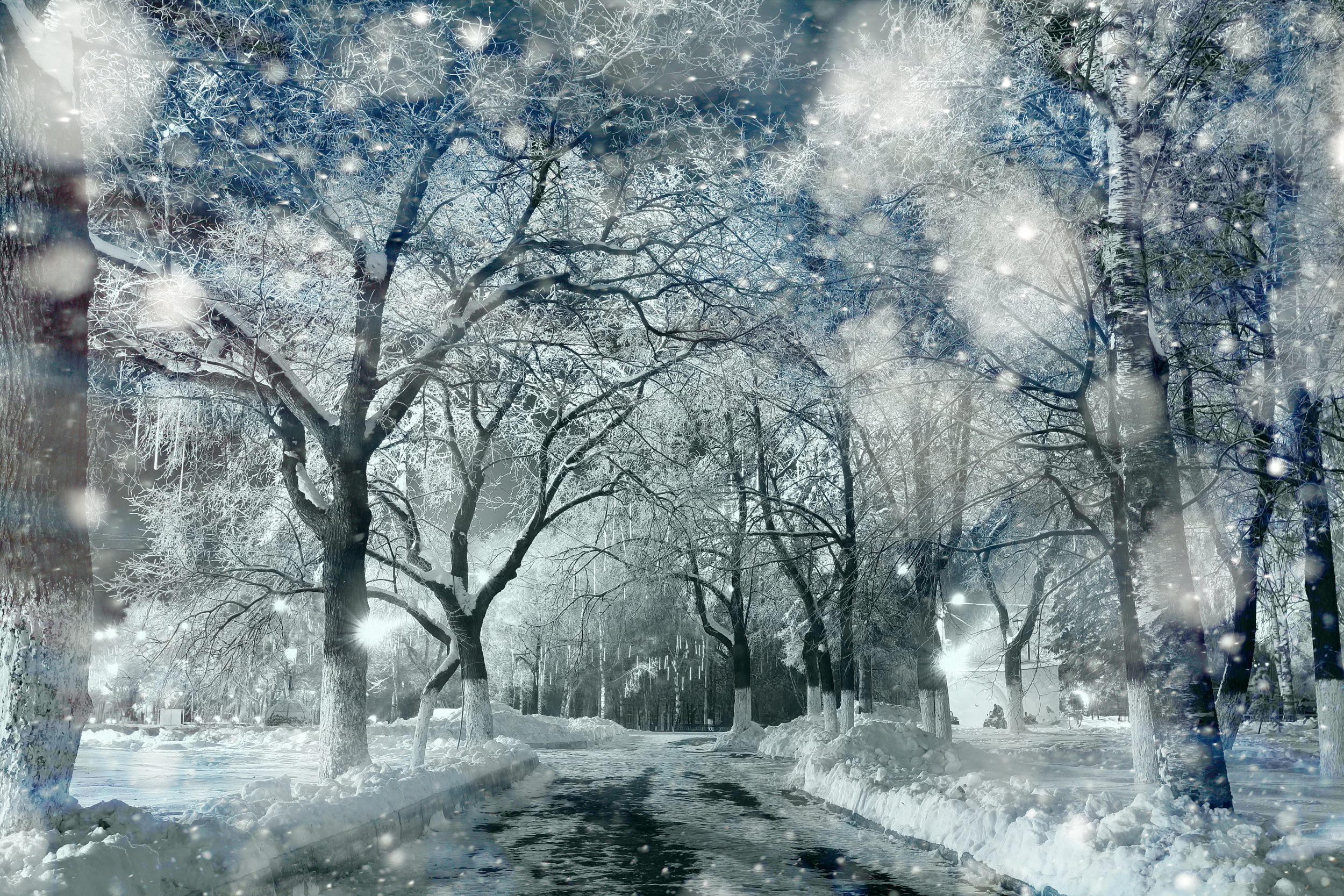 El Niño’s fingerprints appear to be entrenched in the outlook for winter 2016.

According to National Oceanic and Atmospheric Administration (NOAA) forecasters, El Niño could become one of the strongest on record and is expected to influence weather and climate patterns this winter by impacting the position of the Pacific jet stream.1

Even with El Niño lurking in the shadows of the jet stream, the Farmers’ Almanac calls for a repeat of last winter—at least in terms of temperatures with unseasonably cold conditions over the Atlantic Seaboard; eastern portions of the Great Lakes and the lower peninsula of Michigan; Ohio, Kentucky, most of the Tennessee and Mississippi Valley; as well as much of the Gulf Coast. New Englanders will once again experience a very frigid (shivery) winter (deja vu).2

Blizzards are snow events with sustained winds of at least 35 mph. In addition to the hazards from accumulating snow and drifts, blowing snow decreases visibility. The snow can damage utility poles—causing power outages—and disrupt highway travel. The weight of the snow increases the structural load on roofs, leading to potential structural collapse.

There are also hazards associated with human error, including the potential of carbon monoxide poisoning from using portable stoves for heating small spaces, and entrapment in a vehicle overturned from the driver hitting black ice on the highway. Driving too fast for weather conditions and the time it takes to adjust to winter changes in road conditions play a major role in traffic fatalities. According to the University of California–Berkeley weather center, fatal crashes are more likely to occur on the first snowy day of the season compared with subsequent ones (14 percent higher chance).3

Freezing temperatures and heavy snowfall are also two of the most damaging causes of equipment freeze-ups and building collapses. The Blizzard of 2015 was a heavy hitter in central and eastern Long Island (N.Y.) and all the way through southern and eastern New England.

IHS Global Insights estimated a $1 billion hit across the Northeast, including a $265 million loss in Massachusetts, where residents on the eastern side of the state dug themselves out of 3 feet of snow.4

Winter weather poses a threat to pipes, particularly overnight when temperatures plummet and water demand is minimal. Water has a maximum density just above freezing, but once the temperature hits around 37 degrees Fahrenheit (2.8 degrees Celsius), it reverses course and expands. The pressure of water freezing and expanding (2,000 pounds per square inch) attempts to enlarge the pipe, pushing against its sides as well as its nearby valves, seams, and faucets. The water doesn’t have to actually freeze to cause a problem; the pressure alone can eventually force a crack to rupture.

Frozen pipes feeding boilers and heating units can render the equipment inoperable. Broken pipes in sprinkler systems can send showers of water throughout a building, damaging areas far from the original problem. If pipes freeze and burst and the building is unoccupied at the time, the damage can go undetected, spilling several hundred gallons of water per hour.

A water flow alarm is designed to detect water movement from a broken pipe and alert the building’s contracted alarm company. These calls, handled on Protocol 52: Alarms, most often receive a CHARLIE-level response.

A private caller’s report of a water problem could also generate an ALPHA response on Protocol 53: Citizen Assist/Service Call. A “CITIZEN ASSIST” is defined as: “Providing a service to citizens in incidents that may not be an emergency, but, due to unusual circumstance, cannot be resolved without intervention and, if left unattended, may become an emergency.”

A simple water problem can become a serious hazard, however, when combined with an electrical hazard, which is indicated as a CHARLIE-level response. Wet electrical connections can short circuit, which may lead to fire or electrocution.

Another common report in the winter months is a sounding carbon monoxide detector. This is due largely to the use of carbon monoxide (CO) in combustion fumes, such as those produced by stoves, lanterns, burning charcoal and wood, gas ranges, and heating systems.

These alarms are handled on Protocol 52, which includes a “C” suffix for carbon monoxide, Key Questions to address sick individuals, and the Post-Dispatch Instruction (PDI) “Do not use any open flame or anything that could cause a spark. Leave the building/area immediately (and leave the door open).”

Carbon monoxide poisoning can be difficult to diagnose. The colorless, odorless gas can cause symptoms similar to the flu including headaches, fatigue, nausea, dizzy spells, confusion, and irritability. Later stages can cause vomiting, loss of consciousness, and eventually brain damage or death.

If carbon monoxide poisoning is suspected and people are sick, the situation is urgent and the calltaker must notify EMS immediately. MPDS Protocol 8: Carbon Monoxide/Inhalation/HAZMAT/CBRN also provides instructions for caring for these patients.

Callers should be advised against going outside to investigate downed or hanging electrical wires, because snowdrifts, tree branches, and debris can hide the potentially live wire underneath. Touching a live wire or simply getting close to the hazard can be fatal. As stated in Rule 1 of Protocol 55: All electrocution patients are assumed to be in cardiac arrest until breathing is verified.

The caller’s responses to the Key Questions on Protocol 55 guide the calltaker in selecting appropriate PDIs to address electrical hazards. For instance, KQ 3 “Is water involved with or near the hazard?” and KQ 6 “Is anyone near or in contact with the electrical hazard?” directly relate to PDI-c “Beware of electrical risks and electrified water,” and PDI-d “Do not touch any unconscious people or anything touching the electrical hazard.”

Problems don’t stop when the snowstorm ends. Rising temperatures melt the snow and make the weight of the snow heavier on the roof. Though the mass of the snow stays the same, the volume, due to melting and compacting, decreases and in turn causes a rise in density. Heavy, wet snow can weigh more than 10 pounds per square foot. Two feet of snow on an average size roof can be the equivalent of 38,000 pounds, or 19 tons.

Those attempting to remove the snow from a roof should only do so if the building is determined to be structurally safe by an authority familiar with the snow conditions of the region and the design capacities according to local building code.

If snow is not removed from the roof, snowmelt during the day freezes when the sun goes down, creating sheets of ice and freezing drains. “Ice dams” are formed when the melting snow runs down a roof and later refreezes at the edge of the roof. The refreezing gradually forms a heap of ice that blocks the path of the melted snow.

On a flat roof or a roof with a low slope, it doesn’t take long for the ice dam to cause water backup, leakage, and eventually roof collapse. The potential of a roof collapsing not only endangers the people inside, but it also threatens responders entering these hazardous spaces, some with roofs pre-dating fire code. Leaking chemicals and other toxins intensify the danger.

Other signs of an impending structure collapse include cracking beams, walls buckling, doors popping open, lowered sprinkler heads, jammed doors, stuck windows, and deformed steel members. Many survivors report having only seconds to decide whether to leave the building.

The Key Questions on Protocol 54: Confined Space/Structure Collapse help determine the severity of the problem, whether anyone is known to be trapped, and whether hazardous materials are involved. The Key Questions also provide identifying information for responders, including the type of building/space/structure, the location of trapped individuals, the warning placard numbers (chemical ID) of leaking hazardous materials, etc.

A caller’s report of smoke outside could be from homeowners firing up their fireplaces for the first time of the season or during the cold winter nights. Or it could be the result of an exhaust dryer vent operating off the side of a house; the appearance of smoke could be the hot dryer air mixing with the cold air outside.

Reports of outside smoke are typically handled on Protocol 68: Smoke Investigation (Outside). However, Chief Complaint Selection Rule 6 in Case Entry states: “If smoke is smelled inside a building, use Protocol 69.” Calls reporting smoke coming from a building could lead to the Structure Fire Protocol, as the smoke’s origin would be within the building.

Winter is not immune to structure fires, as the chill and the holidays bring on their own ignition sources: candles, torches, and portable heating units. During severe cold weather, homeowners have even been known to use blowtorch devices to attempt to thaw frozen pipes, often resulting in the need for Protocol 69: Structure Fire.

Protocol 65: Mutual Aid/Assist Outside Agency addresses an agency’s reliance on “MUTUAL AID,” defined as: “an agreement between communities (agencies) that allows for the exchange of equipment for use during an emergency. Also, a request for specialized apparatus or equipment to the scene of an emergency, or a request for station coverage due to unfilled normal assignments or unusual activity levels.”

Reliance on standard mutual aid, however, may not be possible. Blizzards and ice storms may cause regional impacts, cross jurisdictional boundaries, and transcend state boundaries. Planning personnel should consider what other, more distant fire departments could be tapped for help and whether neighboring departments are looking for the same backup assistance. State and federal government disaster assistance can be requested during severe weather emergencies when local resources are exhausted or require additional support.6

In addition, FEMA recommends standard operating procedures for the following: