Don't You Cry No More

Luke Blankenship got into 911 “mostly by accident.” The Support Services Major for Sedgwick County Department of Emergency Communications (Wichita, Kansas, USA) started as a calltaker in 2012 soon after he graduated high school and stuck around because he thought the job was cool.

“If a job’s cool, sometimes that’s enough for a 20-year-old,” Blankenship said with a laugh. 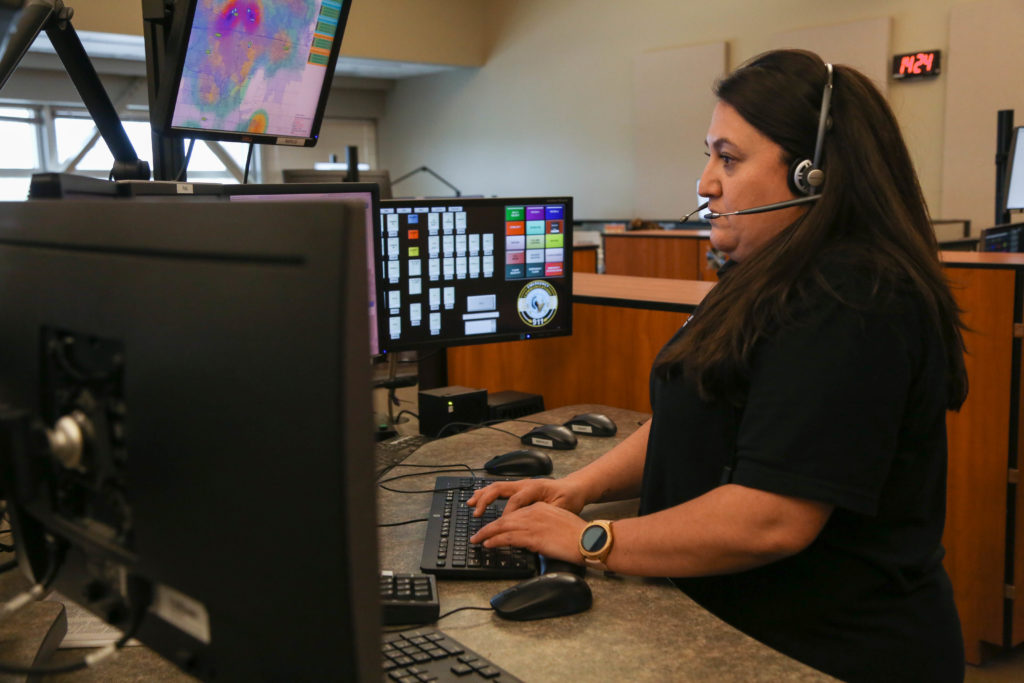 More than that, though, it made him feel like he was part of something bigger. And later when he became a dispatcher, Blankenship got to work with first responders directly and became aware that the decisions he made at the console always had a direct impact.

“The things I was doing mattered,” he said.

The work of Blankenship and his colleagues at Sedgwick County impact the roughly half million people who live in the service area, including Wichita, which is the largest city in Kansas. The center is located right in downtown Wichita in the government district, near the courthouses and jail. Since it was built in 2007, the dispatch agency has shared it with the emergency management department—emergency management is on the first floor and dispatching is on the second. It’s also only two blocks away from the Arkansas River and not too far from Kimlan Sandwiches, the place Blankenship likes to stop to grab banh mi after a shift. You can’t beat really fresh bread and the crunch of pickled vegetables for a couple of bucks after an eight-hour shift.

Sedgwick County dispatches for 30 individual medical, law enforcement, and career and volunteer fire agencies. On any given day, the number of calltakers, emergency dispatchers, and supervisors on the floor 18, and they have two “power shifts” where calltakers come in during peak call times to help with the call volume.

One of the things the dispatchers appreciate about working at Sedgwick County is that everyone in leadership roles has been promoted internally. That means that those who are in charge of making decisions are aware of the challenges and stresses the calltakers and dispatchers face because they used to work the consoles themselves (and still can, in a pinch).

It’s because the leadership understands the stresses of the job that a trained, in-house peer support team was made a priority for the employees. The team provides support for calltakers and dispatchers who are distressed after a critical incident or the day-to-day cumulative stress. All around the center there are canvases on the walls that were painted by dispatch staff in a kind of art therapy that gives a colorful representation of who they are as a team and as individuals. Because no two dispatchers are exactly the same, the leadership team follows a servant leadership style that focuses on the person as a whole rather than just as a “warm body” at a console.

Each employee is also granted one mental health day a year where they can call in, no questions asked, and receive a day off using either paid or unpaid leave. “The mental health day is something we fought for for a while and we finally made it happen in the last two years,” Blankenship said.

The best stress aid, though, is the Quiet Room. Inside the Sedgwick County facility, there’s a private room where employees can go when they’re feeling overwhelmed to close the door and decompress. There’s no television and no distractions—just an oasis of serenity in an otherwise hectic environment.

And speaking of the environment, being smack dab in the heart of America’s Tornado Alley, Sedgwick County is used to handling calls related to tornadoes and other storms. In fact, the 911 supervisor on duty at any time is in charge of activating the area’s tornado sirens. The supervisor monitors the storm warnings, making sure they hit the button at the right time. The dispatch center works closely with the emergency management team on the floor below them in those instances. Whenever a storm is on the horizon, the center prepares for a huge influx of calls. According to Blankenship, there are a surprising amount of calls reporting that houses have been set on fire by lightning strikes.

As is the instinct in most dispatchers, the Sedgwick County dispatchers are eager to help, especially during a natural disaster. The center has a protocol, though, that dispatchers should call in first and ask if they’re needed rather than driving straight there to help. They understand the importance of having enough people on the floor to handle the influx of calls and also having a second shift ready to go to relieve the first one.

When it isn’t tornado season, nearly 80% of calls fielded by Sedgwick County are law enforcement ones—anything from reckless drivers to bank robberies to shootings. Because it covers the biggest metropolitan area in the region, it attracts more people which generates more day-to-day police responses, like disturbances between individuals and vehicle accidents.

Emergency dispatchers in the agency are cross-trained in all disciplines, which is much needed as it’s the primary PSAP for the most populated counties in the state and they take a substantial number of EMS and fire calls as well. Training for dispatchers is divided into phases, learning each discipline at a time, and on any given day they might be serving in a number of roles.

Sedgwick County has been a consolidated PSAP since 1977, long before it moved to its current building. The comm. center floor had a conveyor belt system to take notecards from calltakers to the dispatchers Because they didn’t have GPS or computer-generated maps, there was a giant map of the county on the wall printed on sheet metal. Thin lines of tape marked jurisdiction boundaries and notes were written directly on it.

The conveyor belt is gone now, although the map hangs in the current agency, reminding the dispatchers where they’ve come from and who they’re covering. The calltakers and dispatchers of Sedgwick County are the first first responders for their community and they’re ready to go.