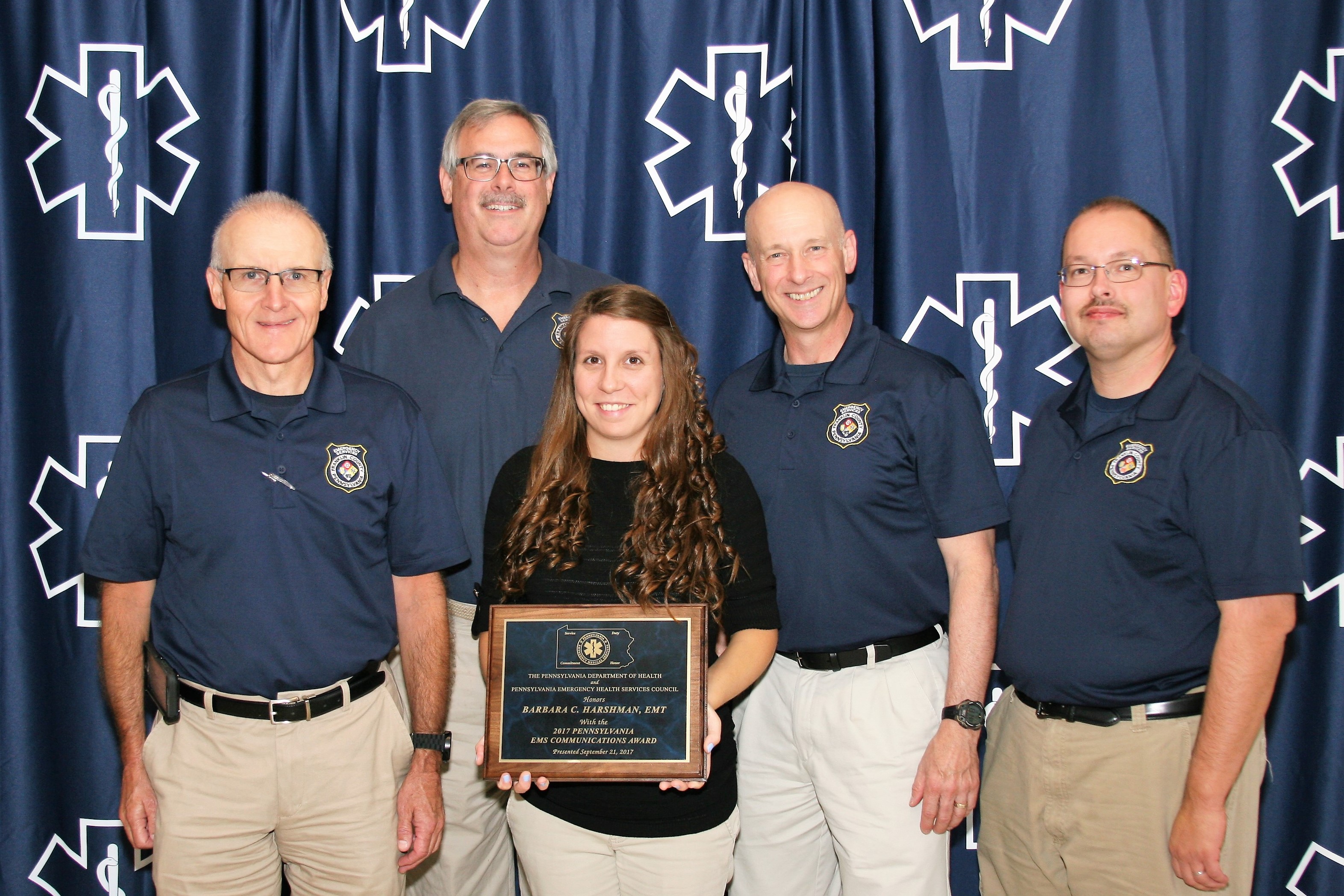 She hesitates in talking about her role in a life-saving event, yet, you can tell she is proud of the ability to help people through crisis.

In essence, the 2017 Pennsylvania EMS Communications Award reflects Harshman’s efforts in the profession of her ambitions.

In September 2017, Harshman accepted the award that is sponsored by the Pennsylvania Department of Health and Pennsylvania Emergency Health Services Council. The annual awards ceremony recognizes individuals and organizations in 10 categories for significant contributions to the state’s EMS system.

“Every day, our first responders put their own lives on the line to make sure that a patient in crisis gets the emergency medical care they need to survive,” said Acting Health Secretary and Physician General Dr. Rachel Levine, according to a Pennsylvania Department of Health press release. “These award recipients stand out because they have gone above and beyond the call of duty.”

Harshman was nominated based on her overall performance exemplified by a call she answered and dispatched in June. The caller was driving to the hospital when she realized that time was not on her side or on the side of the car’s other occupant. Her passenger was turning blue from a suspected drug overdose, and she called 911 knowing he might not survive much longer. Harshman told the driver to pull over and to get the passenger out of the car (flat on his back on the roadside). Harshman then proceeded with CPR PAIs.

A car on the side of the road attracted welcome attention.

“People stopped,” said Harshman, who has been with the center for two years. “The caller provided CPR, but others assisted in helping her and the gentleman.”

Fire/EMS units in Franklin County responding on scene administered naloxone, a medication designed to rapidly reverse opioid overdose. The man was awake when the ambulance arrived at the hospital. He survived.

Harshman’s quick thinking and knowledge of the medical scenario and emergency services system helped give the victim "the best chance at survival," according to a news release from Franklin County Commissioners.

The EMD attributes her skill on the phone and radios to EMD training and the 10 years she worked as an EMT prior to joining Franklin County 911. She said the field background contributes to her visual understanding of the situation, while the protocols and the way the Medical Priority Dispatch System™ (MPDS®) is scripted provides her with greater control over the call.

Harshman said she loves working in dispatch. The award was unexpected, and she was truly “surprised” to receive the announcement, particularly since she had not been told about the nomination.

“I’m not one to be in the spotlight,” she said.

Franklin County covers an area of 754 square miles and has a population growing in excess of 150,000 residents. The center provides dispatch to 15 townships and 7 boroughs, in which there are 18 fire departments, 15 EMS departments, and 6 law enforcement departments. The 911 center processed 77,215 police, fire, and emergency medical service calls in 2016.