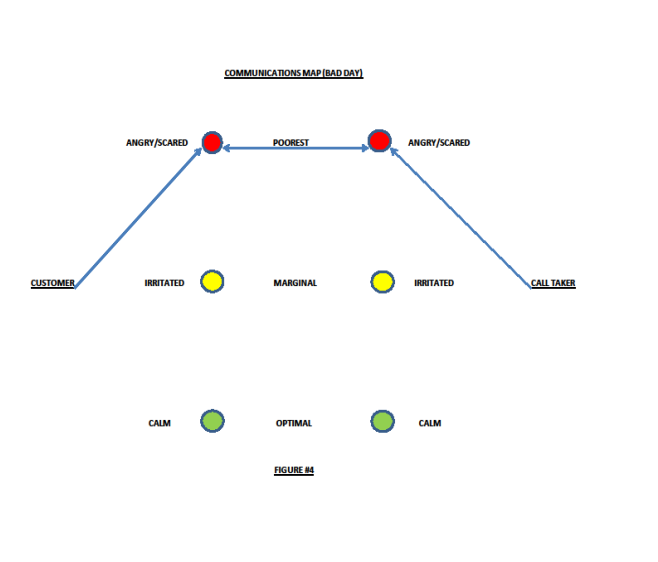 The ability to communicate effectively with customers exhibiting various levels of emotional turmoil can be challenging for many telecommunicators. Some have a natural ability to handle such calls with relative ease while others struggle to maintain their composure with more challenging ones. Certainly, experience can remedy some of these issues, but every telecommunicator is different and sometimes ingrained personality traits can torpedo an exchange with critical information being lost in the process. 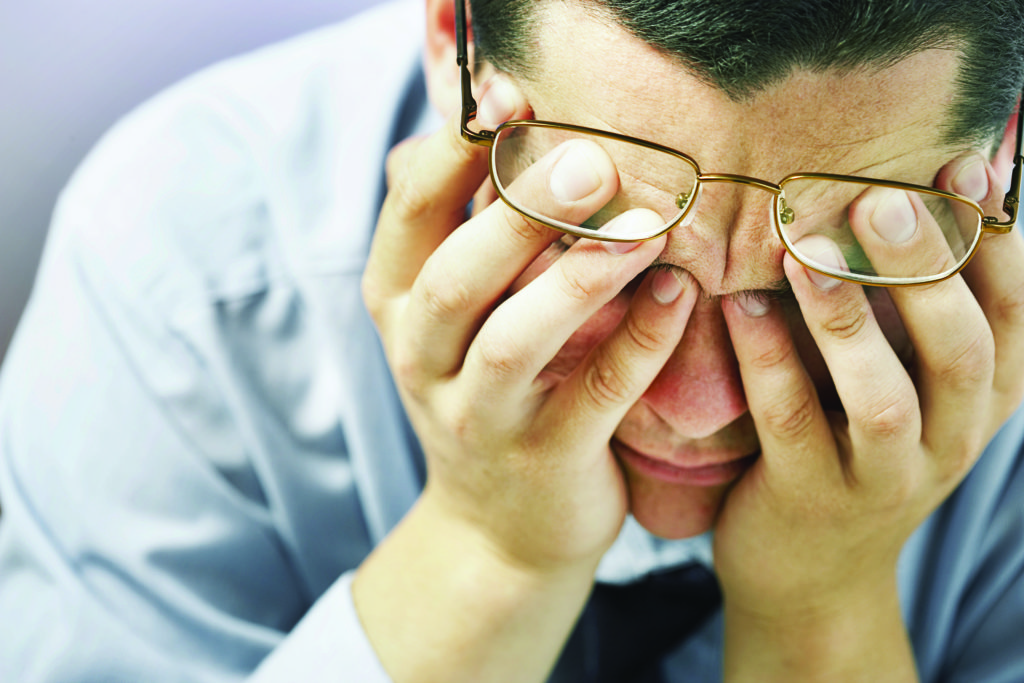 From a quality assurance perspective, it’s always important to improve the calltaking skills of telecommunicators and there are a variety of ways to accomplish that task; however, no matter what methods are used, it can also be helpful for the telecommunicator to see interactions and break them down accordingly. For that purpose, I have developed a method called communications mapping. Communications mapping can take any conversation between a telecommunicator and a customer and visually represent the good, the bad, and the ugly of that exchange.

Figure 1 shows the basic diagram that is used for mapping purposes. It is easy to interpret. Imagine two traffic lights side by side. The colors themselves represent the emotional states of either the calltaker or the customer: Red = angry/scared; Yellow = irritated; Green = calm. The success or failure of an interaction depends both on where both parties enter the map and where they remain. 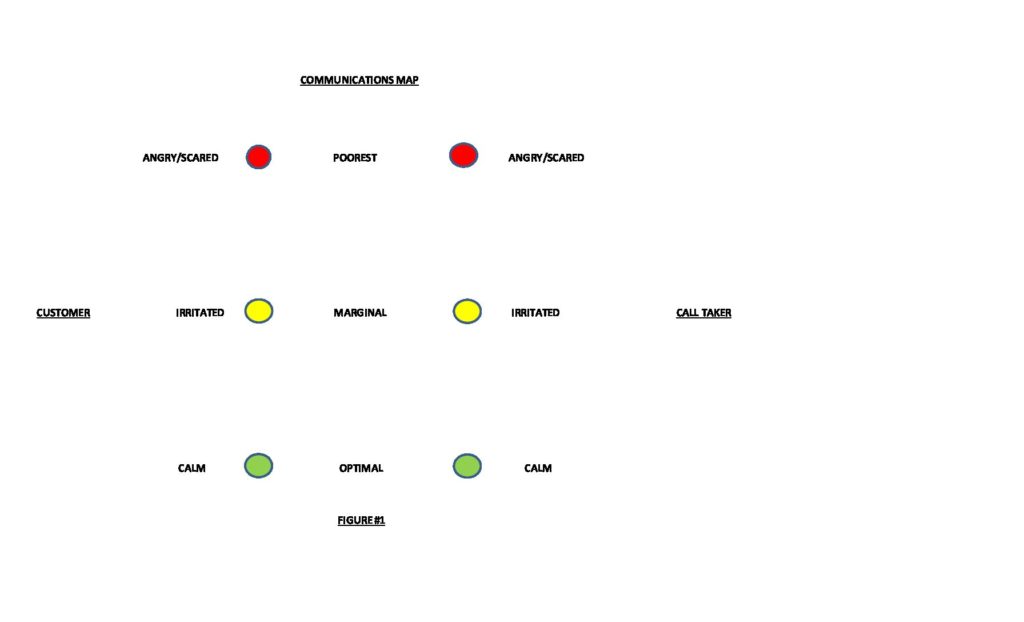 Figure 2 (below)shows the map for optimum communications; both parties are calm and there is a free exchange of information and few misunderstandings. The problem resolution is high.

Figure 2 shows the map for optimum communications; both parties are calm and there is a free exchange of information and few misunderstandings. The problem resolution is high. 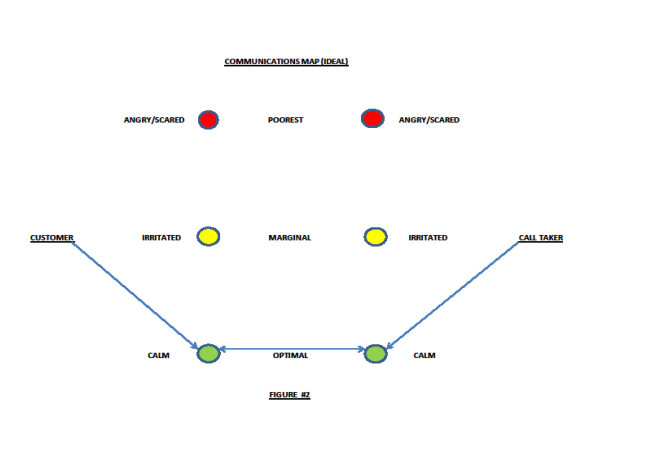 In the 50/50 communications map (figure 3 below), both parties are irritated and there may or may not be a free exchange of information. Problem resolution is dependent on someone (hopefully the calltaker) becoming calm and regaining objectivity. 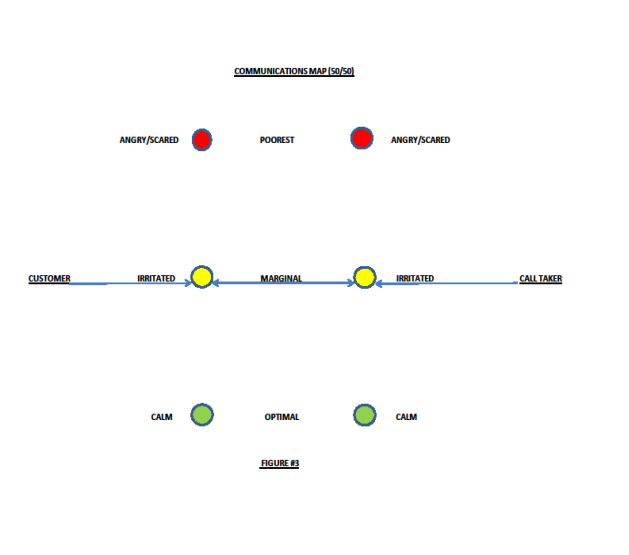 The Bad Day map (figure 4 below) demonstrates a communications failure; both parties are angry, no one will back down, and little or no information is exchanged. Problem resolution is nil or less than satisfactory.

No matter what level the customer enters the communications map (figure 5 below), the calltaker should always strive to remain calm and objective, thereby reducing customer stress and bringing the person down to his or her level. This can be accomplished with a combination of active listening, empathy, paraphrasing, and assurances that assistance will be provided to the customer. The goal of every transaction is unfettered and productive communications leading to a successful resolution of the problem. 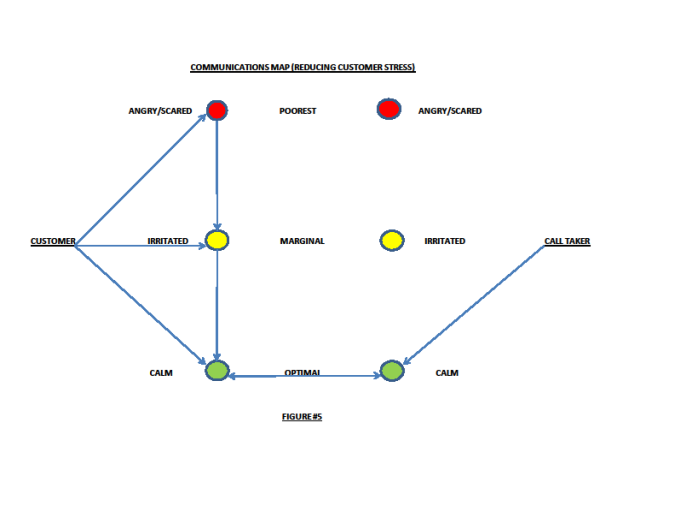 Depending on where customers enter the communications map, they may be angry, irritable, etc. Calltakers who do not remain calm/objective can become progressively more frustrated when attempts to gain control of the call fail. This frustration can easily escalate for both the calltaker and the caller (figure 6 below). In such situations, the calltaker must remember that assistance/resolution is the goal. Rather than argue and waste time, use whatever information is available and get help started. Then use repetitive persistence and/or allow the caller to talk him or herself out for the purpose of gaining an opening and asking for additional information. 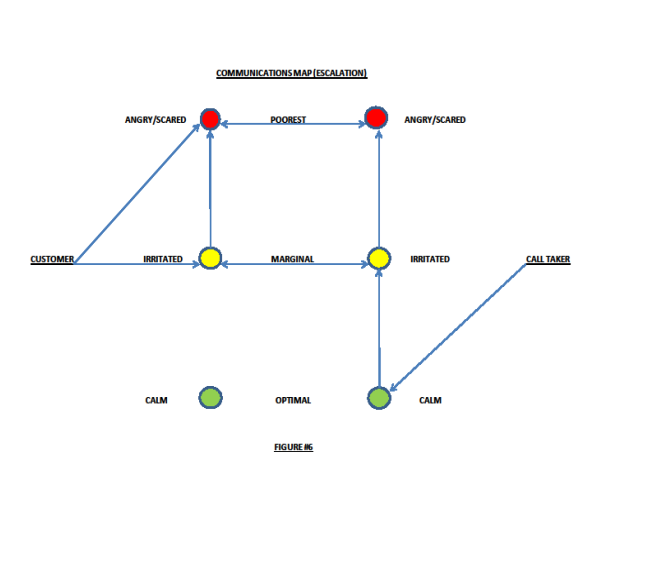 Successful calltaking is greatly dependent on the ability to remain calm and objective in stressful situations. As noted earlier, for some people this is an innate ability, but for others it must be learned. Let’s be honest: dealing with angry, sometimes hysterical people on a daily basis and extracting useful information from them isn’t a natural act. It requires a calltaker to be equal parts referee, psychologist, and tightrope walker. There are three elements to keep in mind where achieving that goal is concerned: ego, self-awareness, and the fact that calls are recorded.

One of the most significant obstacles to communication a telecommunicator faces is internal. Unlike many other jobs, telecommunicators must be able to deal with insults, threats, and rude behavior from those they are tasked with helping. No one would suggest that’s easy, but what complicates the process is when the telecommunicator’s ego kicks in and they become offended or angry with the customer. Ego interferes with the call and creates delays in service when telecommunicators are more interested in arguing a point than focusing on problem resolution.

The bottom line: In order to remain calm, take nothing personally. Attaching emotion to words could generate responses that the telecommunicator could regret.

A corollary to ego is self-awareness. Every telecommunicator should recognize that within each of us are emotions that can be activated by certain words or tones of voice used by another. It creates a knee-jerk reaction that’s often difficult to control. Being self-aware can alert us to these emotions and help us to maintain composure during stressful situations.

One of the most embarrassing things with which a telecommunicator can be confronted is a recording of an exchange with a customer that devolves into bickering and one-upmanship while the actual problem isn’t addressed. It can be difficult to defend when the telecommunicator is supposed to be the professional. Such an exchange would be mapped as follows: 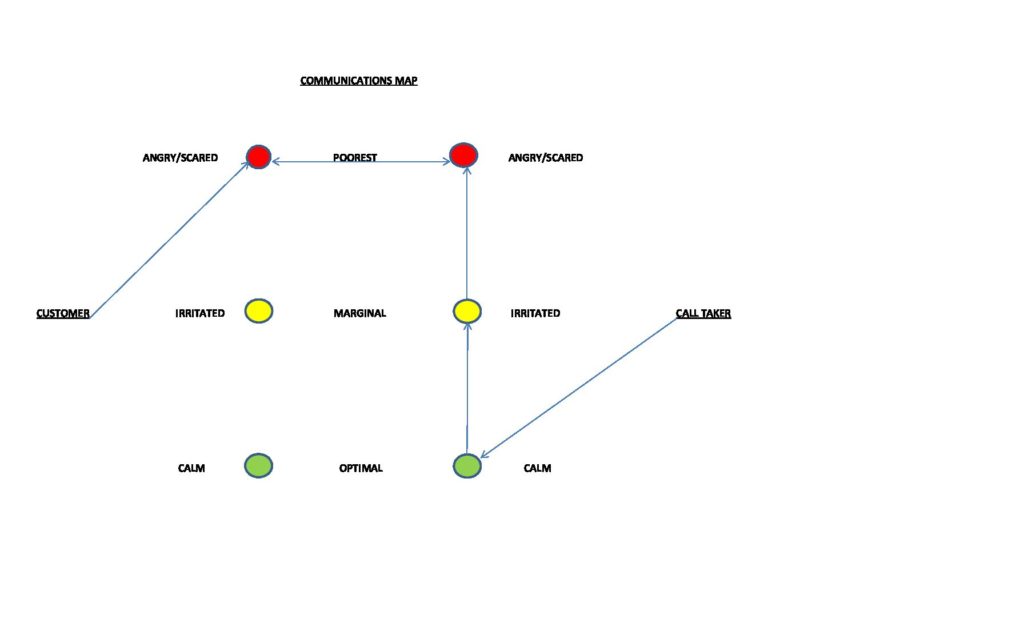 Conversely, listening to a recording of a raging customer while the telecommunicator remains calm and professional—reducing the caller’s emotional level, extracting information, and resolving the problem—can be a sublime experience. Mapping the call: 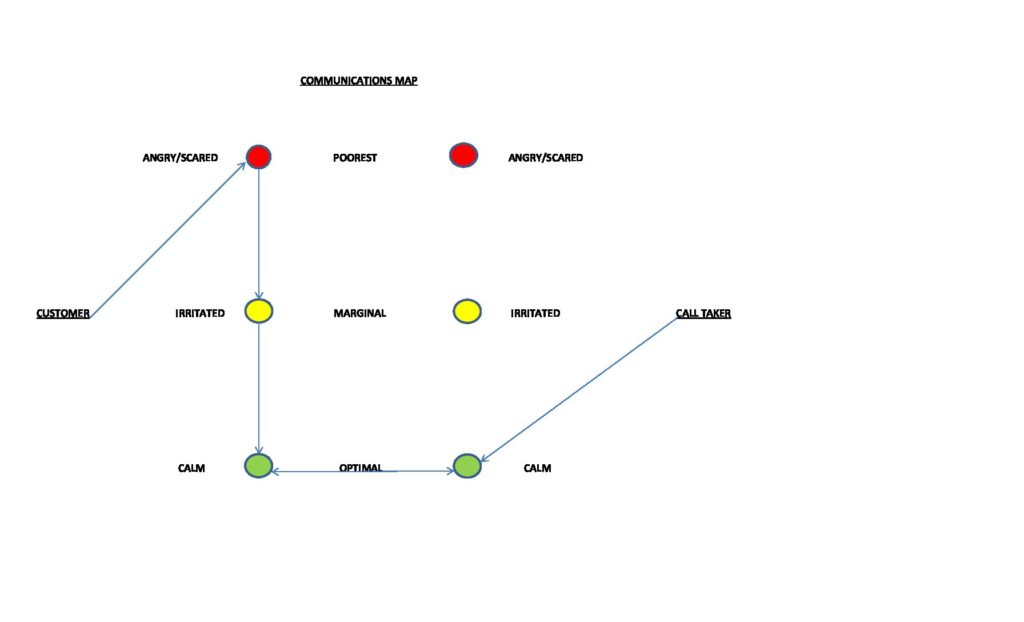 Because telecommunicators answer so many calls, the fact that they’re recorded tends to fade into the background. This becomes problematic when calls become derailed due to the mishandling of them and a playback confirms the error. When during the course of a call the telecommunicator feels the ego becoming engaged and self-awareness takes a backseat to scoring “gotcha” points with a caller, remembering the call is being recorded and how the end result will sound to others should serve as a sobering reminder to remain objective and seek proper resolution.

Being a telecommunicator is not an easy job. It’s one that very few people can do and fewer still can do well consistently. Being consistent often depends on the ability to keep one’s emotions in check with a challenging caller. By implementing the suggestions above in conjunction with mapping, such a goal can be accomplished.