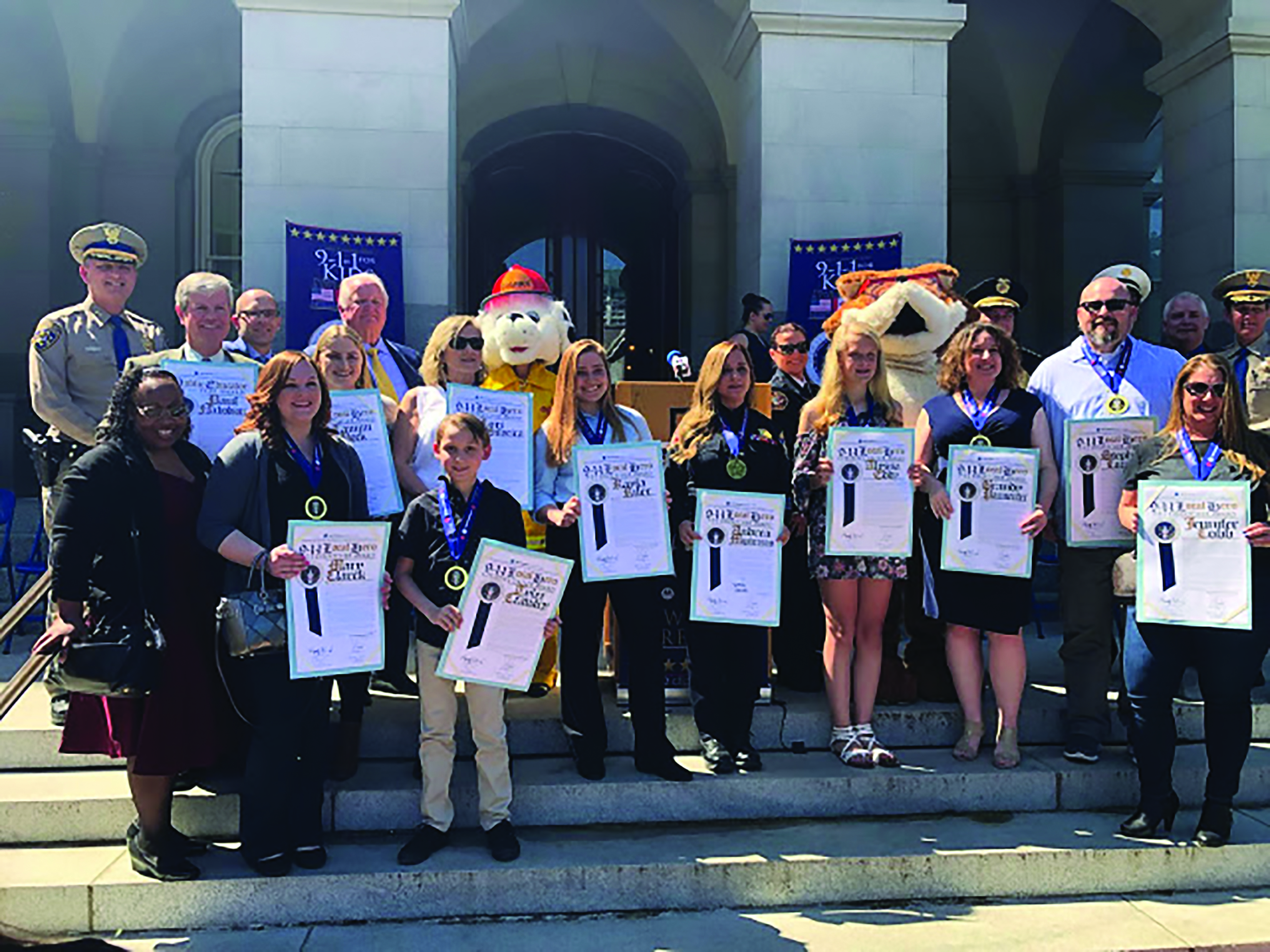 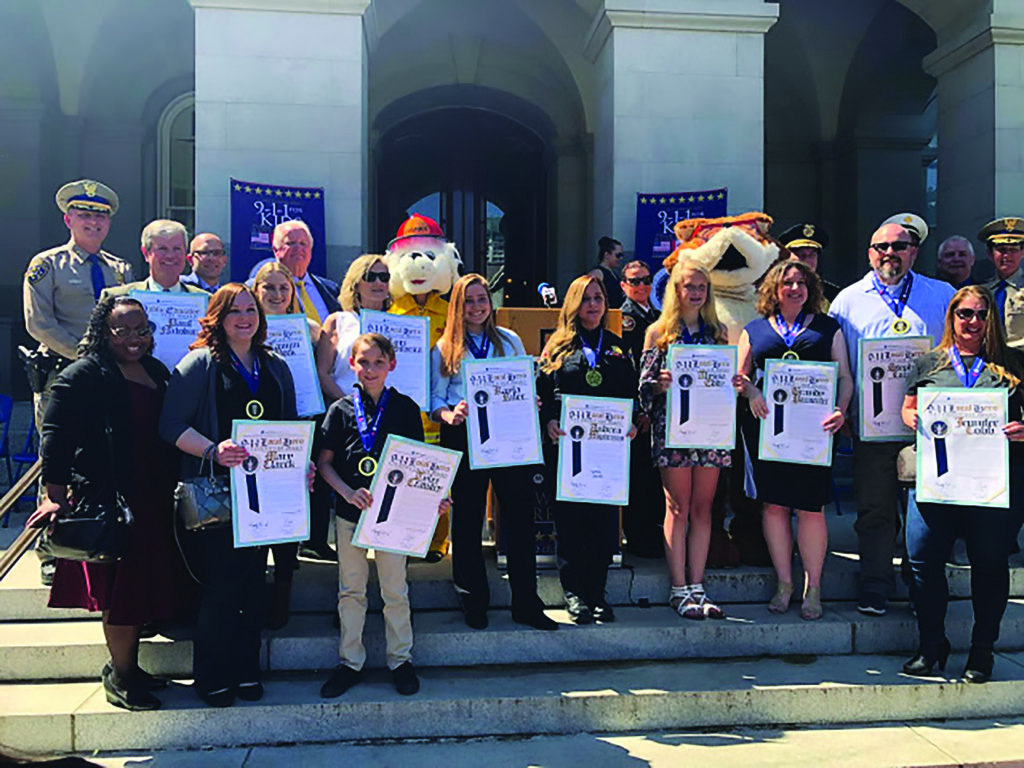 There are some things that you, as an emergency dispatcher, simply cannot do. You cannot see the scene the caller is phoning from. You cannot respond to emergencies yourself. You cannot prevent emergencies from happening in the first place. With some calls, you might give anything to be able to do all three.

Besides taking every call and treating every caller with empathy (which takes a lot of training and energy), what’s an emergency dispatcher to do?

One possible option is building bridges between emergency response and the community, especially in helping people understand what to expect if and when they call. What’s scarier than the worst possible moment of someone’s life? Going into that moment completely blind, unaware of who to call or what can be done. Educating locals in what questions they will be asked and how emergency response operates can help make the process of calling 911 a much less nerve-wracking process for everyone involved.

As a peak example of this kind of harmony, last April in Sacramento, California (USA), several people were honored with awards for their actions before and during emergencies. An emergency dispatcher named Mary Clark was given a 911 Heroes Award for providing lifesaving instructions to a child during a medical emergency.

Clark, who has worked as a Eureka Police Dispatcher for six years, said the little boy who called her was very calm and patient, even though she had to put him on hold more than once due to the hectic energy of the center that day. He was able to rattle off his address and phone number and knew who to call when his diabetic mother was “acting weird.” Clark gave him her full attention and walked him through the EMD instructions until paramedics arrived to help his mother.

Paul Nicholson was also given an award that day—Public Educator of the Year—for his efforts in educating the children of the Bayside/Eureka area of California (USA) in the proper usage of 911. He goes to 40 schools and teaches 3,000 children a year (most of whom are in kindergarten, first grade, or second grade) the basics of making an emergency call. The boy who saved his mother’s life was among the many students he taught.

Nicholson began teaching young elementary school children how to make emergency calls 18 years ago, after he fell off a cement truck in front of his home. His wife called 911, and he had to be taken to the hospital in an ambulance. His 5-year-old son watched the event transpire and, when Nicholson came home, asked why Nicholson hadn’t died. This question led to a discussion about 911 in which Nicholson realized his son didn’t know how to dial a phone, which led to the larger realization that other children might not know what to do if they were in the same situation. 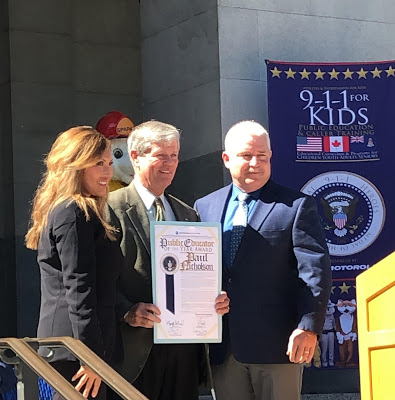 At the time, Nicholson was working full time as an insurance agent and had a client who taught kindergarten through second grade. He floated his idea of teaching children how and when to call 911 by her and before he knew it, he was teaching the whole school. The Humboldt County Risk Manager called him up after that and asked if he would be interested in continuing the program in other schools. When he said yes, she put out a press release to all superintendents, and Nicholson now spends 40–50 days out of the year giving the 911 presentation in schools.

Part of Nicholson’s lesson plan allows children to use his 911 simulator to practice giving their address and answer questions on a landline. The simulator’s handset, which functions in both English and Spanish, is becoming more and more unfamiliar to children who are growing up in houses where cellphones are the primary method of communication. Nevertheless, Nicholson says it’s important that they know how to dial on a landline. Among many other stories and useful tips, his presentation also covers teaching students how to bypass the locked screen of a cellphone to make an emergency call, something that not many adults know how to do.

The child honored in April’s ceremony wasn’t the first student Nicholson has taught that ended up saving the life of a loved one due to his lessons, nor will he be the last.

How can you achieve dispatch-educator-caller balance in your own center and community even if you don’t have time to spend entire days at schools like Nicholson? We’re glad you asked!

Outreach doesn’t just involve telling locals what to do in case of an emergency, although that is a large part of it. In order to really address your community’s needs, you need to understand what the needs are in the first place. For instance, rather than only focusing on the frustrating emergency calls that come in, you might look for a disconnect causing certain emergency calls to never be made in the first place. A good place to start with community outreach is listening to the concerns of community members and understanding why they might not feel comfortable calling 911.

The International Academies of Emergency Dispatch’s research team conducted a study in 2018 to find out what the prevailing attitudes toward 911 are in groups that are among the minority in Salt Lake City, Utah (USA). While the data is still being processed, the preliminary findings show that not everyone was aware of the separation between 911/dispatch and the actual responders who show up. It might be the same in your community. Often, the locals interviewed had no problem with emergency dispatchers; it was the responders (particularly police) that they were nervous about. If that’s the case in your community, start a dialogue with your responders to find out how that image can be counteracted.

An issue that came up in the LGBTQ+ group was misgendering. Misgendering is when someone is addressed by the wrong pronouns or title, such as “he,” “she,” or “they” or “sir” or “ma’am.” It’s a good reminder that you can’t always tell someone’s gender just by the sound of their voice or by what their name is—if you’re unsure, be sure to ask how the caller would like to be addressed. Making the effort to use the caller’s correct pronouns may seem like a little thing, but it is an act of respect that can make all the difference to someone who is worried about calling 911 in the first place.

Speaking of language, another problem that cropped up was language barrier issues. Not everyone speaks the dominiant language of the area (in most of America, it’s English). Deciding whether or not to call 911 in an emergency is greatly impacted by whether or not the caller knows that translation services are readily available. If your center utilizes translation services, make sure to advertise so the community is aware. What’s the use of having a resource if no one knows it’s there? The same goes for TTY and Text-to-911—if you have resources to help those who don’t speak the dominant language, let people know. Simple public service announcements (PSAs) can be posted on social media, used in non-English media outlets, or taped up in gathering places like churches or community or recreation centers.

If your center handles Medical Priority Dispatch System™ (MPDS®) calls, another thing to keep in mind is the expense of an ambulance. (This is an issue more pertinent to America since ambulance rides are covered by the National Health Service in the U.K. and other countries where medical costs aren’t as steep.) Across the groups surveyed, most people would rather drive themselves to the hospital or deal with the injury or illness on their own than call 911 and potentially have to pay for an ambulance. While you personally can’t change the pricing, you can make community members aware of your area and agency’s policies. In most areas, patients aren’t charged for being assessed by a paramedic who arrives in an ambulance—they only have to pay if they’re transported to the hospital. This anxiety can also be partially allayed if either a community paramedic service or the Emergency Communication Nurse System™ (ECNS™) is available to callers, as calls involving minor injuries or ongoing illnesses will be appropriately triaged.

These are just some examples of concerns locals might have regarding calling for emergency services. The best way to find out what your neighbors are saying is to get out and talk to them. It’s only once you understand the barriers to calling 911 that you can begin to address them.

On the flip side, when deciding what information to present to the public, why not consider what it is you wish callers knew about your job before they call? Clark said she wished callers knew that she strives to give each and every caller her full attention, despite the fact that her center only has two emergency dispatchers on duty at once with one working the radios and one answering the calls. It can get very busy in there, and the same kind of patience the little boy afforded her would go a long way. Give locals a sense of what’s going on behind the metaphorical curtain.

There’s no one correct path to get involved in community outreach, especially when you tailor it to your community’s specific needs. There are many resources and assets to help someone who wants to get into 911 outreach in their own community. There’s no reason to start from scratch—there are people all over the country and the world who’ve come up with curriculum, games, and handouts that are ready to be tailored to your community’s specific needs. Great places to get started include 9-1-1: The Number to Know (www.know911.org) and 911 for Kids (www.911forkids.com). Nicholson has his own website (www.a911guy.com) where you can watch his presentation and borrow letters to send home to parents in both English and Spanish. These materials can be taken into schools, libraries, or assisted living facilities and modified to suit your audience. 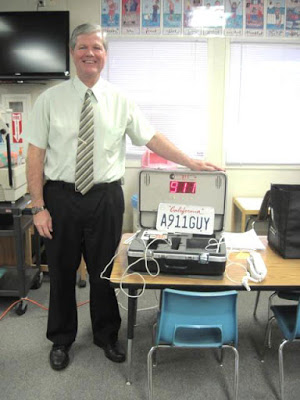 “Keep updating [your presentation],” Nicholson advised, something he’s been sure to do in the past 18 years. “Also, keep it interesting and keep it short.”

If physically going out into the community isn’t something that’s feasible because you’re short on time or money (or both), perhaps think about creating social media accounts for your center. Coordinate with the agencies you dispatch for and find out the kinds of things they post (if they have accounts) and what kinds of posts get the most engagement. Do highlights of your emergency dispatchers to put a face to the voice. Give reminders of what information callers should have ready. Ask open-ended questions like, “What is the most common cause of house fires?” to increase engagement.

Another way to get the word out about the work your agency is doing without necessarily leaving your chair is by contacting local TV stations and newspapers to promote stories. Did an emergency dispatcher take a difficult call that turned out well? Has your center recently become accredited or re-accredited? Write up a short press release and send it on. Most local stations and papers are looking for stories that inform and draw the community together.

If you’re completely overwhelmed, start small. Hand out coloring pages at the farmer’s market. Talk with the Public Information Officers (PIOs) from your responding agencies to find out how they connect with locals and ask how you can get involved. Post about the basics of calling 911 on your personal Facebook page and encourage your friends and family to share it with their friends and family.

Everyone can do something to make the role of the emergency dispatcher a little more well-known and the process of calling 911 a little more familiar.

(Editor’s Note: The results of the IAED’s “911 Attitudes” study will be released in a future issue of the Annals of Emergency Dispatch & Response.)