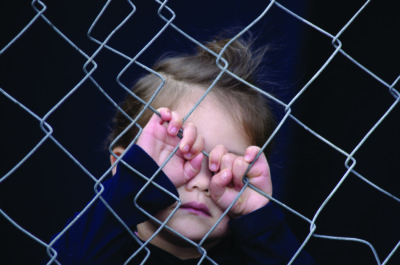 The evening of Oct. 6, 2005, the estranged husband of Lynetta Myrick grabbed the youngest of the couple’s three children from her mother’s arms, threatening to harm the girl before fleeing from their Cincinnati, Ohio, home by foot.

A neighbor hearing Myrick’s scream called 911, providing an address, description of the suspect, and a report of what she had heard in answer to the dispatcher’s questions. Myrick placed a second 911 call on her cellphone, lost the connection, and agreed to the neighbor’s offer to pursue the husband by car. She called again from inside the car, and this time, the dispatcher told her to either pull over or to return to her home and wait for police. Myrick chose the latter.

That was the last time Myrick saw her daughter alive. Two days later, 18-month-old Aliyah was found dead, a victim of blunt force trauma inflicted by her father.*

“There was no reason that child should have died,” Hinkle said. “I couldn’t believe it when I listened to the call. It was absolutely the worst call I’ve ever heard.”

Hinkle jumped into action. He scheduled a meeting among staff to review every single policy and procedure affecting the welfare of children. Administrative change, however, wasn’t his incentive. He was out to change the culture of 911 calls involving children endangerment.

“If 911 does anything to excess, it should be to do everything we can to protect children,” said Hinkle, who was later appointed Executive Director of the National Center for Missing and Exploited Children (NCMEC) Call Center Project. “What could be more important?”

Whether a family is reporting a missing child or improper contact between an adult and child, usually the first point of communication is a public safety calltaker. To make sure agencies collect all the information they need when a child is in danger, NCMEC in 2007 teamed up with several organizations, including the International Academies of Emergency Dispatch (IAED), to produce a guide for emergency dispatch professionals. The publication, Model Policy and Best-Practice Guide for Call-Takers When Handling Calls Pertaining to Missing and Sexually Exploited Children, was released during the summer of 2007.

The document is a reference specifically for emergency calltakers to present the missing and/or sexually exploited child response process in a logical progression from the initial call through the first response. The document includes guidelines for reports involving abductions and abandonment, and a child who is lost, injured, or otherwise missing. For cases of possible sexual exploitation, it provides questions for a person reporting: child pornography, child sexual molestation, child victims of prostitution, online enticement of children for sexual acts, and a child who may be with an adult companion met on the Internet. (More information about the document appears at the end of this CDE.)

The guide, however, was not the first to address the problem of missing and exploited children. Communication centers using the Police Priority Dispatch System (PPDS) already had guidelines in place to use, and, because of the public served by the PPDS, they go beyond reports of missing and exploited children and into protocols that encompass all ages.

This does not diminish the importance of the NCMEC document since the recommended guidelines in the national standards focus on the recovery of missing children and on the consistency in the manner 911 centers handle these cases. But there is a major difference: PPDS is a structured protocol, while the document provides recommended guidelines.

The type of emergency, and subsequent applicable protocol, is determined at Case Entry. The caller’s response to the initial questions sends the dispatcher to either Protocol 101: Abduction (Kidnapping)/Custodial Abduction/Hostage Situation or Protocol 123: Missing/Runaway/Found Person, although the actual protocol that applies can change from one to the other as the call progresses and the dispatcher collects more information about the incident.

An abduction is the taking and carrying away of one person by another through force, fraud, or persuasion. It may involve a ransom demand.

On this type of call, the time lapse between the incident and the call is very important. Police will want to set up a perimeter around the area in an effort to keep any vehicles or victim contained, increasing the chances of finding them. That is why the dispatcher needs to find out how much time has passed since the abduction actually happened. A car traveling at 45 mph can cover 2 ¼ miles in just three minutes, and another three-quarters of a mile every minute after that. In six minutes, the car may be 4 ½ miles away, making it difficult to set up an effective perimeter. The EPD will also ask about weapons and, if possible from information relayed by the caller, make police aware of the type(s) of weapon(s) involved or mentioned.

If police field units are setting up a perimeter, an accurate description of the car is necessary. When obtaining this description, dispatchers should follow the protocol and use the format described by the acronym CYMBALS (color, year, make/model, body style, additional descriptors, license plate, and state/province). This provides a logical, standardized format for receiving and broadcasting information relating to automobile descriptions.

The caller will also be asked to describe the suspect. Age, gender, and accent can help in identifying the suspect, while EPD questions regarding caller demeanor, background noises, and call delivery can provide vital information about the circumstances. If the suspect is known, such as in cases involving parental custody disputes, the EPD will ask the caller to write down essential information, including the suspect’s phone number and address.

In some cases, a suspected abduction may be reported as a past incident. Many of these calls actually turn out to be missing person calls where the reporting party has surmised that the victim must have been abducted when he or she did not return home on time.

When processing these calls, determining the time lapse between the event and the call will dictate the priority of most of the other actions that are taken.

Protocol 123 identifies cases of those who are missing, without reference to age. The protocol also addresses runaways (the act of intentionally leaving without permission) and found persons (any person who has been located).

The PPDS defines a missing person as someone whose location is not known, but there is no evidence that a criminal act has taken place. Evidence of a criminal act indicates a potential kidnapping/abduction. Those who are categorized as “at-risk” missing persons include very young people, the elderly, and persons with physical or mental conditions that impair their ability to care for themselves or to make sound decisions based on circumstances presented to them. These important identifiers are listed in the Key Questions, which also address the possibility that the missing person could be a runaway.

Found persons are any persons reported to be missing who have been located. Found persons may also be at-risk persons who are noticed by others, even though they have not been reported as missing.

When someone is reported as missing, the chain of events that follows depends on the situation and age of the missing person.

A 3-year-old who has been missing from home for 15 minutes will bring an army of searchers to an area, while a 17-year-old who disappeared after dinner with a suitcase and a $100 bill may be seen as a runaway case. A 70-year-old Alzheimer’s patient who has been missing for an hour from a nursing home will bring an immediate search, while a husband who hasn’t come home from work by 9 p.m. may not generate such an urgent response. Agency policy, procedure, and protocol will dictate the response to each situation.

A found person call may involve a very young person, an elderly person, or a mentally ill person. These can be difficult calls because the person who has been found may not be able to tell the police where he or she belongs. The EPD may need to contact other agencies, such as social service agencies. Recent missing person reports should also be consulted for cross-reference.

Similar to the goals the IAED emphasizes in its training and certification courses, the NCMEC standards document stresses the methodical collection of pertinent information (incident location, callback, and contact information) through systematic inquiry. The document recommends entering all information into an electronic format that can be sent to law enforcement in conjunction with on-air broadcasts.

In a breakdown of the procedures expected of communications personnel, the calltaker is asked to make a preliminary assessment about the level of risk to the missing child based on the questioning. It is also the recommended responsibility of the calltaker to obtain sufficient information from the reporting party to broadcast a radio message that alerts other officers and agencies, if necessary, about the circumstances of the child’s disappearance. Information should include the child’s height, weight, hair and eye color, and clothing, as well as the location where the child was last seen. Most importantly, the radio alert should contain any information known about a possible abductor with special emphasis on the description of the suspect and vehicle used as well as direction of travel.

The calltaker is also asked to search agency records for related information (data mining) to let responding officers know if the child or family had been subject to previous reports that might have bearing on the incident. Calltakers should also gain access to the Sex Offender Registry list to determine whether individuals designated as sexual predators reside, work, or might otherwise be associated with the area.

The guidelines do not replace the AMBER (America’s Missing: Broadcast Emergency Response) Alert program; rather they are meant to help in gathering the information necessary for an appropriate response consistent with agency policy. AMBER Alerts are emergency messages that are broadcast when law enforcement determines that a child has been abducted and is in imminent danger. The broadcasts include information about the child and the abductor, such as physical descriptions, as well as information about the abductor’s vehicle, which could lead to the child’s recovery and the apprehension of the suspect.

Federal law requires police to report each case of a missing child under age 21 reported to them to the National Crime Information Center (NCIC). Federal law prohibits police from establishing or maintaining a waiting period before accepting a missing child or unidentified person report. The National Child Search Assistance Act also mandates agencies to:

Enter, without delay, reports of missing children under age 21 into the state law enforcement system and NCIC and make it available to the state’s Missing Children Information Clearinghouse or other agency designated to get such reports

Update identifying information on each case in NCIC within 60 days

Maintain a close liaison with NCMEC for the exchange of information and technical assistance in appropriate cases (42 USC §§ 5779 and 5780).

*In a 2–1 decision, an intermediate Ohio appeals court ruled that a city and its 911 dispatcher were not liable for negligence in advising a mother to stop following her estranged husband after he had kidnapped their 18-month old daughter, who he subsequently murdered. The dispatcher did not engage in willful and wanton misconduct in advising the mother to either pull over or to return to her home and wait for police to provide assistance. The city and dispatcher were therefore entitled to governmental immunity.