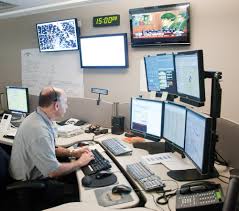 Not very many people can say they have been with their organization since the beginning. Fewer still can say they were specifically recruited to help get the endeavor off the ground. When Shireka Graham moved to the Atlanta, Georgia (USA), area from Mississippi (USA), 10 years ago, that is just what IXP Corporation did.

Since she has been there from the start, she is one of a number of IXP telecommunicators to talk with about the Chattahoochee River 911 Authority—or “ChatComm” for short. Graham, Deputy Director of Operations, has been with ChatComm since the operation was bare bones.

“When I walked in, there was no carpet on the floor, just concrete,” she recalled.

Graham started out as a line dispatcher and has moved up through the ranks over the last 10 years. She was promoted to Communications Training Officer (CTO), Supervisor, Training Manager, and then in 2017 she became Deputy Director of Operations.

Graham is passionate both about her role and ChatComm as a multi-agency emergency communication center. With the size and scope of the operation, that’s exactly what ChatComm needs. IXP provides ChatComm with operations technology and technology support as part of a multi-year managed service.

IXP dispatches fire, police, and EMS operations for the northern Atlanta metro area including Sandy Springs and Johns Creek in Fulton County, for police in Brookhaven, and Dunwoody in DeKalb County with fire and EMS transfers to the county.

What kinds of MPDS® calls does ChatComm get most often? Off the top of her head, Graham said it probably had to be Protocol 17: Falls, which may be due in part to the fact that there are a lot of senior living facilities in the area they serve. And, of course, Protocol 26: Sick Person (Specific Diagnosis) is used often. As for Fire Priority Dispatch System™ (FPDS®) calls, it is definitely Protocol 52: Alarms.

Overall, the center handles approximately 400,000 calls a year (most of which are police calls) for an area with 325,000 residents.

Unlike most emergency response centers in the United States, which are owned by the government and funded by tax money, ChatComm is a managed service delivered by IXP Corporation. In fact, it is the largest privately owned 911 center that currently exists.

What does that mean for the day-to-day practices of emergency dispatchers?

“It gives us a little more leeway as far as training goes,” Graham said. “We’re able to focus more on communication. When you’re with a county, you have to cater to different departments.”

Does a privately owned 911 center handle dispatch stress differently than a county 911 center? ChatComm has ongoing training programs tailored to the specific agencies they support. They also have stress-related programs for their employees as part of their benefits program. Center management, supervisors, CTOs, and corporate human resource staff are also educated to monitor each employee’s wellness. Additionally, there is a quiet room in the center where emergency dispatchers can go to catch their breath and get away from the noise. ChatComm also utilizes an Employee Assistance Program (EAP) and has chaplains available from the communities they serve.

IXP’s operation is accredited in both Emergency Medical Dispatch (EMD) and and Emergency Fire Dispatch (EFD) through the International Academies of Emergency Dispatch® (IAED™) and is the only privatized center accredited through the Commisison on Accreditation for Law Enforcement Agencies (CALEA). Going above and beyond the standard is crucial to both the center and Graham.

“It’s definitely important to us that we are processing calls at the highest level of customer standard and care,” Graham said. “ACE gives us the guidance to make sure we’re delivering that kind of customer service.”

Because achieving ACE was a priority, Graham and the emergency dispatchers put in the work to get those results.

“You have to start with educating the staff on the importance of ACE,” she said. “That’s where it all starts. You have to tell them what ACE is, what it means, and how we’re going to process it. If the staff is doing everything they need to be ACE, everything else falls into place.”

Graham and ChatComm also got help from Kim Rigden, IAED Associate Director of Accreditation, who spoke with Graham one-on-one and walked her through the best training methods to achieve ACE. Graham also spoke with Angela Burrer, M.S., Communication Chief out of Texas (USA), who acted as ChatComm’s ACE mentor. “She kept me from pulling my hair out,” Graham said of Burrer.

But Graham isn’t the kind of person who sits back while she watches other people work. For example, when she began the re-accreditation process, Graham had no idea that MPDS Protocol 38: Advanced SEND existed. Since ChatComm primarily dispatches police calls, the Protocol proved to be a huge asset to them. Graham had the training manager really focus on Protocol 38, which included having emergency dispatchers take lessons from the IAED’s College of Emergency Dispatch, while Graham completed the trainings herself.

When asked about her most memorable call, Graham immediately mentioned the center’s first active shooter call in 2014. Graham was the supervisor working that day, so she was front and center when the initial calltaker—a trainee—answered the call. It started out as a domestic call, and Graham remembered that everyone in the center had to come together to act as a cohesive unit—every telecommunicator, every firefighter, every EMS medic, every police officer. The call ended badly (both the caller and the suspect died), but the ChatComm team was able to understand that they had done everything they could.

After the call was over, Graham made a point to find the initial calltaker to make sure everything was all right. The trainee is still with ChatComm—in fact, she has recently been promoted to a supervisor position. The call is used to train new hires to let them know what working in a 911 center is like.

“My team is amazing,” Graham said. “I’m extremely proud to have such a dedicated team. They put in the work. We’re like family. If one person goes through it, we all do. This accreditation is important to all of us—we achieved something.”

Becca’s writing background is primarily in creative writing, although she didn’t have a specific emphasis for her Bachelor’s Degree in English at Brigham Young University. She worked as a ghostwriter for two years where she wrote four novels and edited several more.