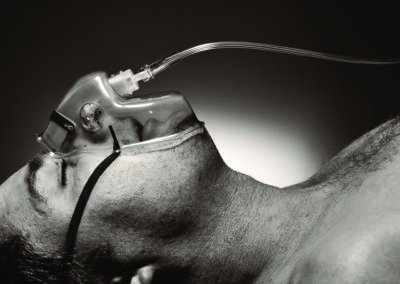 I am writing to inquire how to handle “breathing problems” on Protocol 26: Sick Person.

I received a call about a patient requesting transport to a hospital; the caller stated the patient had an infection, was shaky, unable to move, and had blood/fluid oozing from her leg. The caller stated the patient has stage 4 bone cancer, which causes pain. During Case Entry, when asked if the patient was breathing, the caller stated “She’s not having a good time breathing.” My question is this: When the patient/caller is requesting transport for symptoms that obviously lead to Protocol 26, why would/should I choose Protocol 6: Breathing Problems, as my QA believes, when breathing difficulties are addressed in Protocol 26? It seemed as though they were calling with infection/transport as the KEY symptoms and breathing problems were only brought up by questioning.

If they were calling for a problem with breathing, when asked “Okay, tell me exactly what happened?” they would have said she was having difficulty breathing right from the beginning, not led to that protocol through questioning.

I appreciate your time and await your reply.

Earlier versions of the MPDS actually contained a shunt from P26 to P6 when breathing problems were “discovered” during Key Questioning rather than being voiced as part of the initial Chief Complaint. This was also true of P5 prior to v13.0.

However, research into patient outcomes has shown us that patients who are “shunted” to P6 when breathing problems are discovered on another Chief Complaint are typically less sick. By adding an “Abnormal” (P26) or “Difficulty breathing” (P5) code to these protocols and eliminating the shunt, the code becomes more specific to the initial Chief Complaint and also provides another response option for the agency.

Incidentally, this outcome phenomenon provides some rationale for the new Rule 2 on Protocol 26.

I think the difference of opinion with your EMD-Q is simply that the breathing issue was discovered at Case Entry and, by Rule, a Priority Symptom takes precedence in MEDICAL Chief Complaint selection. However, these Rules are not absolutes and, in this case, the breathing issue was not part of the Chief Complaint. And while I certainly would not fault an EMD for choosing P6 in your scenario, P26 is also appropriate with regard to coding and instruction. If the patient is alert, the 26-C-2 code handles the Priority Symptom well, and the code is more reflective of the Chief Complaint.

I hope this helps. Can we reprint your question and this response in our Journal for the benefit of other EMDs?

Let me know if I can be of further assistance.

Thank you for your response. I appreciate the insight and did notice the lack of a shunt from P26 to P6. I would be glad for you to publish this question in the Journal.

Again, thank you for your time!

Can you confirm if or how we should proceed when delivering multiple births? We have had two instances where we delivered twins and the question was how do we proceed. They went back and started at the beginning of PAIs. We couldn’t find any guidance in the protocol to be guided by. Can we look at this for future guidance?

In most circumstances, the MPDS deals with multiple patients by triaging high and evaluating the scene rather than multiple, individual patients. This is illustrated on several trauma protocols with DELTA-level, Multiple Patient codes, and scene questions similar to what is asked on Protocol 29: Traffic/Transportation Incidents. However, the case of multiple births is a bit different in that it is medical in nature and rarely results in more than three patients, including mom.

This topic was discussed at our last Standards Council meeting in 2012 and an attempt at a multiple patient protocol was made. In the end, however, it was decided to leave the protocol as is. Without getting into a lot of details, “protocolizing” multiple patients is difficult at best, and all of our attempts seemed only to degrade attention to one of the patients. In the end it was decided to simply recommend creating another case for each additional patient and handle them separately. However, with regard to triage, we did create a Multiple Birth suffix (M) for Protocol 24: Pregnancy/Childbirth/Miscarriage (MPDS v13.0) so that agencies can send additional resources to these calls, if they elect to.

For educational purposes, childbirth is a patient-driven event, and the EMD has little control over the delivery process. Therefore, a good understanding of priorities is necessary so that when things progress quickly or happen suddenly, the EMD knows what is important. With all births, and multiple and/or premature births especially, the EMD needs to remember “breathing” and “warm.” If we can manage these issues well, we have a good chance of providing appropriate PAIs.

This topic is somewhat personal for me as I once took a call from an 18-year-old mother, having twins, alone at home with her screaming 3-year-old daughter. The first baby born stopped breathing as the mother was telling me the second one was coming out. Neither of the premature neonates weighed more than 2 pounds. However, I knew about “breathing” and “warm,” and although no specific pathway could guide me through this dynamic situation (mom even refused to lie down), I managed to get that first baby breathing and warm by rubbing briskly with a towel and constantly reminding mom to keep it warm. I can still remember her telling her 3-year-old to “Bring mommy the blankie.”

If you have any suggestions regarding how to handle this more appropriately in protocol, please let us know. However, we think the current instructions are detailed enough, and simply need to be delivered at the right time for each patient, optimally by two callers and two EMDs, and minimally by one EMD that can prioritize the issues and move confidently around Protocol F: Childbirth – Delivery. Because even routine childbirth is a relatively rare EMD event, this protocol should be practiced and studied routinely so that the basics become second nature and navigation in dynamic circumstances can be accomplished.

I hope that helps. Let me know if I can be of any further assistance.