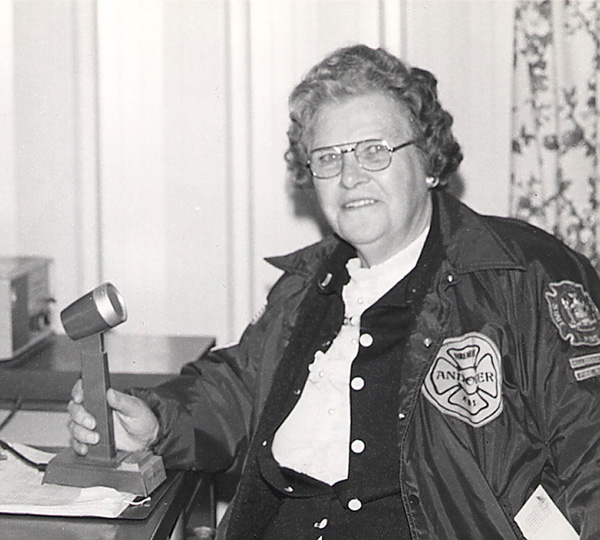 Melba “Mel” Mickle was like an intrepid postal carrier except instead of delivering mail, she lent her voice for 19 years to Allegany County, New York (USA), public services.

Mickle was the sole fire/ambulance radio operator for the county. With a single tower site, Mickle received the seven-digit fire/ambulance and Andover Police Department calls and dispatched mutual fire aid for the entire county, excluding Wellsville, which had its own rescue operator.

Mickle took over dispatch services immediately after her husband, George, died in 1969. Affectionately known as the voice at the base station (KED-620), Mickle kept the line open 24/7, day and night, except for Sunday church services during which volunteer firefighters substituted. According to Allegany local history, Mickle sometimes went “days and nights without sleep to make sure every piece of fire equipment and fire personnel were where they were supposed to be and were safely back at home when the fire was over.”

Mickle retired in 1988 when the radio was moved back to the Allegany County courthouse in Belmont, and 911 services were consolidated. She died nine years later on Nov. 12, 1997.

Don’t think for a second that Mickle was soon forgotten, a postscript in the annals of Allegany County fire history. In 1999 the Mickle family, who lived in Wellsville (Allegany County), organized the first Christmas fireworks display in her honor.3 The tradition continues as the concluding event in the annual “It’s a Wonderful Life in Wellsville” Christmas Celebration.

Allegany County is predominantly rural, with a population numbering less than 50,000 in an area of about 1,000 square miles. Andover, on the county’s eastern edge, numbers about 1,800 people, down from the past decade due to declines in agricultural and manufacturing industries.

While newcomers and visitors might ask “why” about the Mickle name in fireworks, it’s still a place where generations stay and recall their past.

Randy Swarthout has lived his entire life in Allegany County, and for the past 31 years, he’s been a dispatcher at Allegany County 911. Of course he remembers Mickle.

“It’s a small town,” he said. “People liked her. She got paid for what she did, but not very much, and she was always there taking the calls.”

She was very particular about radio etiquette too, according to former Andover Fire Chief George Givens. Things were to be done a certain way, and people did it. Givens said he could remember saying "Okey-dokey" over the airwaves once. Later he was given a citation by Mel for it.4

Mickle worked her last day on Dec. 31, 1988. Swarthout worked his first day on Jan. 1, 1989. He is now head dispatcher and the last remaining of the original hires.

Swarthout was in a work/study EMS program in college when the assistant manager at the consolidated center “twisted” his arm to apply. He was the third hired among three new employees tasked with answering calls coming in on 30 extensions. Designated buttons on each phone alerted responders serving the location the callers cited.

Their workplace featured the essentials of the day. They sat on folding chairs at a table inside the civil defense room at the county building and took notes with pen and paper. Initial training lasted three hours and, mostly, they learned “on the fly.” Experience as an EMT helped Swarthout guide callers in need of emergency instruction for cardiac arrest or baby delivery.

“Very generic [instructions] to pass on to the caller so they could get something started before an ambulance arrived,” Swarthout said.

The center has since come into its own. They dispatch fire/ambulance/law enforcement from a dedicated room in the county sheriff department complex. CAD was installed in the late 1990s. There are 25 full- and part-time emergency dispatchers. Interoperability is set up to go once NG911 becomes available.

“The next phone call could be someone having their worst day,” he said. “It’s satisfying to know you can help.”

The caring keeps on going