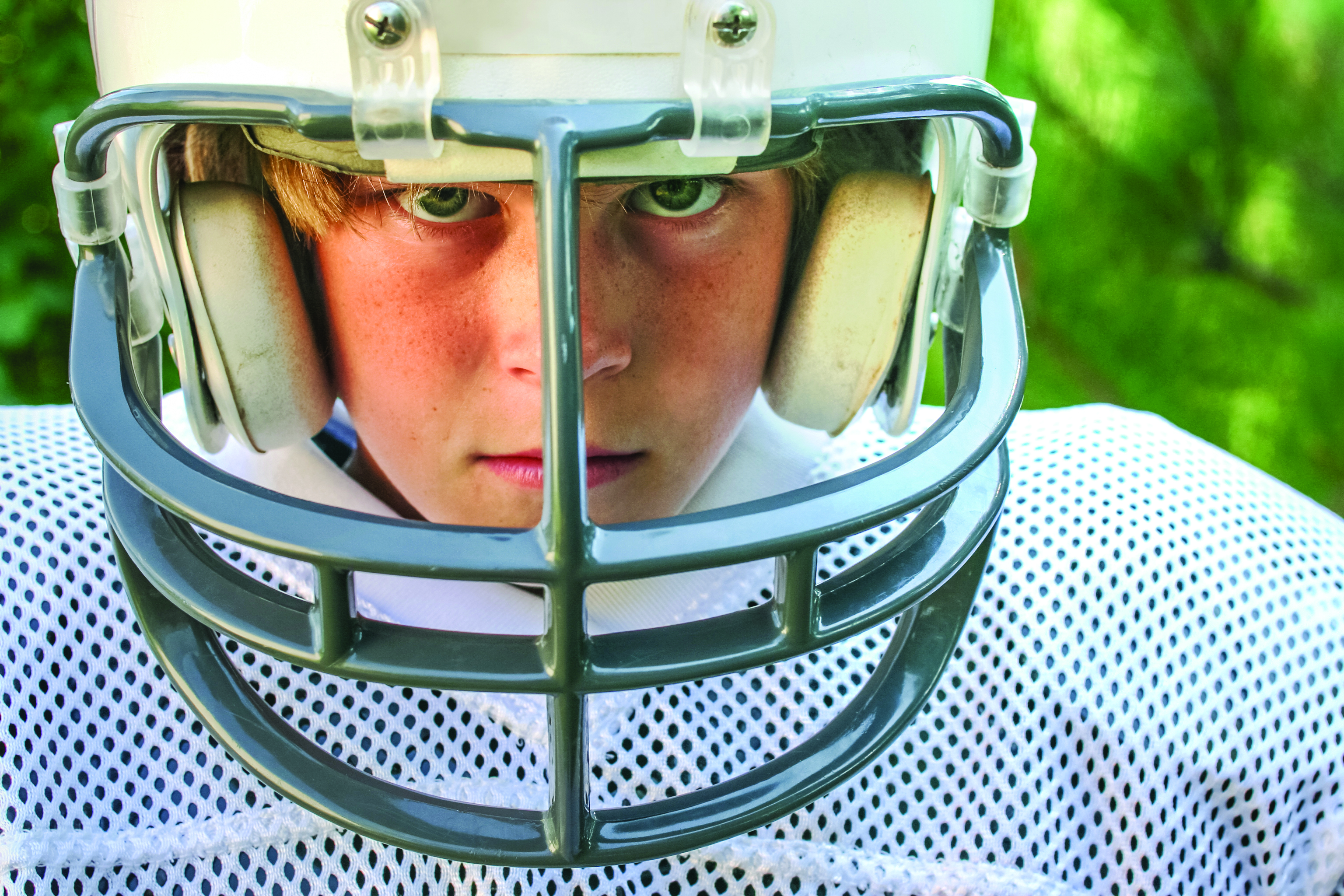 AT THE HEAD OF THE ISSUE 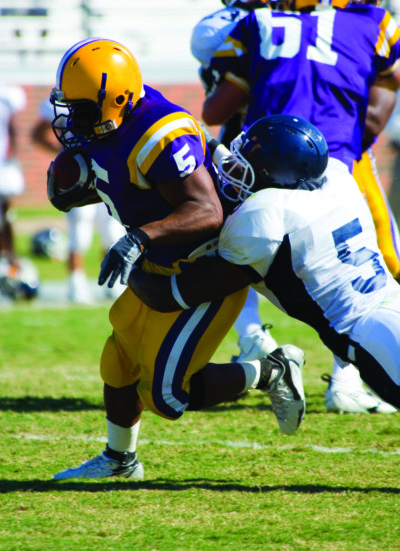 Football, or American football as it is known in many countries outside of the United States, is a wildly popular sport in the U.S. Every fall, stadiums across the country are packed with passionate fans on the professional, college, and high school levels.

People of all ages love watching the incredible displays of speed, strength, and athletic ability. They also love watching crushing hits, hard tackles, and the bruising battles of these powerful men.

American football is among many sports in the U.S. and across the globe that maintains a devoted following and enormous participation rate. Soccer, basketball, baseball, ice hockey, volleyball, tennis, and other sports provide thrilling entertainment for those who watch and an opportunity for those who play to do something they love.

But there’s also a growing concern with each of these sports: head injuries, specifically concussions.

The signs and symptoms

While participating in sports and other activities, just about all of us have bumped our heads. It can happen by falling down the stairs, slipping on ice, falling off a bike, or getting out from under tight spaces. But banging your head doesn’t mean you’ve suffered a concussion or any other Traumatic Brain Injury (TBI), for that matter.

The human brain is surrounded by spinal fluid inside the skull. The fluid is a sort of shock absorber for blows to the head. Concussions occur when something strikes the head and causes the brain to move rapidly inside the skull, either from side to side or forward and backward.

When should you start worrying about head injuries? How are you to know you’ve experienced a concussion and should seek medical treatment? Here are some common concussion symptoms:

Headache or feeling pressure in the head, Temporary loss of consciousness, Confusion or feeling as if you’re in a fog, Amnesia surrounding the event, Dizziness or seeing stars, Ringing in the ears, Nausea, Vomiting, Slurred speech, Delayed response to questions, Appearing dazed, Fatigue

The preceding symptoms usually manifest themselves immediately following the trauma that caused the concussion. However, there are other symptoms that can be delayed by hours or even days that signal you have suffered a concussion. Some of these include concentration and memory complaints, sensitivity to light and noise, sleep disturbances, disorders of taste and noise, and depression.

Brett Patterson, Academics & Standards Associate and Medical Council of Standards Chair with the International Academies of Emergency Dispatch (IAED), said callers don’t always relate previous head injuries to their current level of decreased consciousness or other complaints such as cognitive issues or memory loss. Patterson also pointed out that a concussion is always diagnosed by a physician and is usually done so after the patient arrives at the hospital.

“The diagnosis and treatment are post arrival, unless there are immediate concerns related to decreased level of consciousness, namely airway control,” Patterson said. “These patients are prone to nausea, dizziness, and vomiting, so if the patient is not alert, airway control and monitoring is our primary function from a pre-arrival standpoint.” 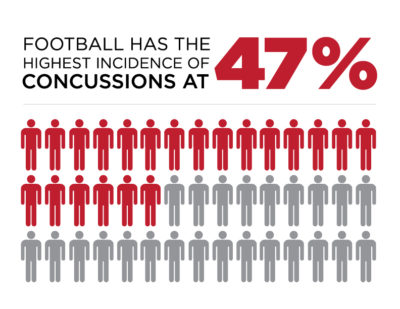 Players, coaches, and officials have long recognized the need to protect players from head injuries. Leather football helmets were introduced in college football in 1893. Designs improved over the years, though helmets were not required until 1939.5 Meanwhile, as far back as the early 1930s, doctors were warning of the potential for football players to suffer concussions. The NCAA’s Medical Handbook stated in 1933 that, “the seriousness of [concussions] is often overlooked” and concussions “should not be regarded lightly.” The handbook advised that players suffering concussion symptoms for 48 hours should not compete for 21 days. Nevertheless, the NCAA didn’t adopt concussion guidelines until 1994,6 and the NFL introduced a concussion protocol in 2007, fully implementing the policy in 2009. Other major professional sports leagues have only recently introduced concussion policies. In 2007, Major League Baseball (MLB) established policies for evaluating player concussions and when to allow concussed players to return to the field. Major League Soccer (MLS) and NASCAR did so in 2011 and 2003, respectively. The National Hockey League (NHL) first introduced a concussion policy in 1997 but didn’t adopt it until 2011. The National Basketball Association (NBA) has no such policy; league officials leave the decision in the hands of individual teams regarding when players should return to action following concussions.

A turning point in professional sports leagues (particularly the NFL) recognizing the dangers of concussions, and establishing policies to protect players from them, came in 2002 when Dr. Bennet Omalu found evidence in the brain of deceased player Mike Webster of Chronic Traumatic Encephalopathy (CTE). This neurological disease had been most commonly found in boxers and describes degeneration of the brain, most likely due to repeated trauma to the head. Symptoms of CTE are thought to include difficulty with cognitive reasoning, physical problems, and emotional issues.7 Omalu conducted tests on other deceased former NFL players and found similar results. Though initially rejected, Omalu’s research was a catalyst in the NFL adopting strict measures to prevent concussions and properly treat players who had suffered them. Omalu’s work was depicted in the 2015 film “Concussion,” starring Will Smith.

“Physicians are seeing more and more concussed patients or those that think they may have been concussed,” he said. “I think that this reflects increased awareness more than it does an increase in concussions. The fact that more people are seeing physicians when they think that they have been concussed is exactly what we would hope for. Physician guidance is very important in the early recovery following a concussion and can help to achieve the fastest and most complete recovery possible.”

Types and causes of injuries 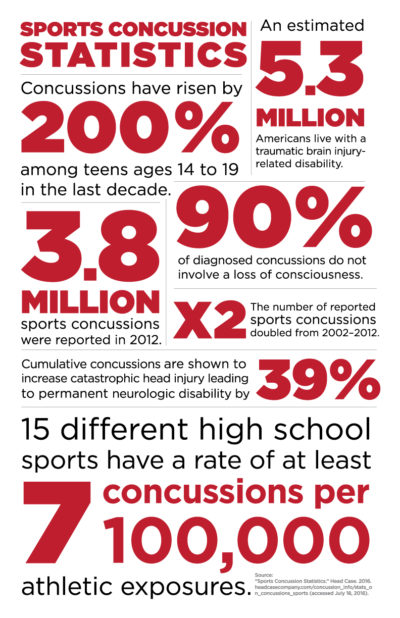 Aside from a concussion, other brain injuries are commonly reported and treated. Each can be very serious and requires immediate medical attention. Some of these include:

In addition, brain injuries regularly occur outside of sports. According to the Centers for Disease Control and Prevention (CDC), 14.3 percent of all TBIs occur as a result of motor vehicle traffic accidents.8 Another 10.7 percent are suffered from assaults.9 Falls and blows to the head are also causes of TBI. These can occur while playing sports and during other activities. Mild TBIs lead to headaches or temporary disorientation, while more severe cases can result in disability, coma, or death.10

Girls are most likely to suffer concussions playing soccer, as Head Case reports 33 concussions per 100,000 athletic exposures in that sport.12 Girls lacrosse isn’t far behind at 31–35 per 100,000.

Soccer also presents a strong likelihood of head injury, where girls and women have a 50 percent chance of suffering a concussion. Though it is not clear if heading the ball causes more concussions than falls or collisions with other players, according to the Sports Concussion Institute, the impact of a player heading the ball is 70 mph.15 Some youth leagues across the U.S. have begun outlawing heading as a protective measure against concussions.

Immensely popular in the U.K., Australia, New Zealand, and in the Pacific isles, rugby has its fair share of concussions as well. Complete with full contact without the helmets and padding worn in American football, The Telegraph newspaper in the U.K. reported that concussions in the Rugby Football Union rose by 59 percent from the 2012–13 season to the 2013–14 season. The publication also states that 10.5 concussions were suffered per 1,000 player hours in 2013–14. During that same season, 13 percent of the league’s players suffered at least one concussion. The publication points out that the rise can be attributed to better awareness of concussions among league officials, suggesting that numbers have always been higher but protocols were not in place to test for concussions or regulate players sitting out after suffering head injuries.16

The percentage of untreated concussions among athletes is alarming. A study conducted by Dr. Mersine Bryan, a pediatrician at Seattle (Wash.) Children’s Hospital, suggests that each year there are as many as 2 million sports- and recreation-related concussions among kids in the United States, ages 18 and younger. Of these, at least 500,000 cases go untreated.17

Hawryluk cautions that concussions can occur in a number of activities.

“The reality is, you are at risk with any activity,” he said. “You can even be concussed on a roller coaster.”

Concussions and other head injuries can do much more than cause headaches and dizziness. As Omalu proposed, these injuries can be severe enough to cause long-lasting impairment of cognitive abilities and other serious disorders connected to CTE. Other researchers have proposed CTE leads to mental slowing, explosive behavior, memory loss, paranoia, pathological intoxication, jealousy, and Parkinson’s disease.18 Boxer Muhammad Ali, considered one of the greatest athletes in history, died on June 3, 2016. He battled Parkinson’s disease for 32 years.

In recent years, retired professional football players have reportedly suffered from similar conditions, in addition to depression and other psychological issues. Former NFL players Dave Duerson, Ray Easterling, and Junior Seau were confirmed to have had CTE, and each took his own life after retiring from the league. Duerson, who died in 2011, had left a note requesting that his brain be used for CTE research.

A recent study by Boston University researchers confirmed CTE in the brains of 87 of 91 deceased former NFL players. Other well-known deceased former players to have CTE as a result of concussions include Frank Gifford, Ken Stabler, and Bubba Smith.20 Additionally, there are a number of former players currently living with CTE, including Brett Favre, Bernie Kosar, Tony Dorsett, Jamal Lewis, and Jim McMahon.

More than 4,500 former professional players and their estates have filed a class-action lawsuit against the NFL for concussion-related injuries.

Hawryluk is happy to report that the majority of concussions don’t lead to severe consequences.

“Fortunately, most patients make an excellent recovery from a concussion,” he said. “A small portion of patients, however, are the so-called ‘miserable minority,’ who suffer from persistent symptoms. This is referred to as post-concussion syndrome, which can be associated with a number of symptoms, including easy fatigability, disordered sleep, headache, vertigo, irritability, anxiety or depression, and personality changes.”

One of the easiest things athletes can do is wear the proper equipment—in games and at practice. People should also wear helmets and proper padding and mouth guards when riding skateboards, bicycles, rollerblades, and horses, and when skiing and snowboarding. Wearing a helmet in these activities can lower the risk of head injury by up to 85 percent.21

“The most important thing for athletes to do is to treat their bodies and those of their fellow players with respect,” Hawryluk said. “Using proper technique and a conscious effort to avoid blows to the head are key. Don’t use your head as a battering ram. Don’t hit an opponent from behind who isn’t able to brace from the contact. Remember that although helmets help, they do not prevent concussions.”

Scientists and medical professionals continue to learn more about concussions and other TBIs. As this knowledge comes to light, amateur and professional athletes have a far greater awareness of the dangers of head injuries and the risks they take by participating in their sports. Children, adolescents, and adults should by no means eliminate these activities from their lives, but it is critical that people everywhere exercise caution and take appropriate measures to reduce their exposure to these potentially devastating injuries. =