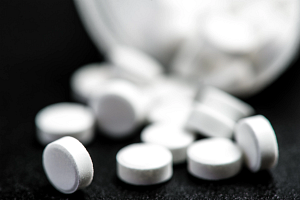 Aspirin Administration And Levels Of Alertness

Good day,
I have a question concerning the new rule for the ASA Diagnostic Tool. It states that ASA can be given to a not alert patient. Can someone elaborate on how one goes about doing so? There is concern that the patient may aspirate on it. Any clarification you can provide would be greatly appreciated.
Ammiel Gunn
System Status Controller, EMD-Q®
Global Medical Response of Trinidad and Tobago
Trinidad and Tobago

Hello Ammiel,
Thanks for your question.

This Rule change was intended to capture those patients who are awake and can still follow instructions well enough to chew an aspirin—see description in the Aspirin Diagnostic Tool graphic. 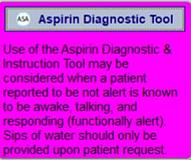 Due to the success of this instruction over the years, with no reports of adverse events, the IAED™ has had requests to be sure we don’t neglect to provide aspirin to any qualifying patient who may benefit—including patients who may be only slightly impaired mentally. Of course, if the EMD has any concern over aspiration due to a more serious decreased consciousness state, the instruction should be omitted.

I’m adding Brett Patterson to this message in case he has anything else to add.

Ammiel,
I don’t have much to add to what Greg has offered only to say the Rule DOES NOT state "that ASA can be given to a not alert patient.” It states:

In these cases, the risk-benefit ratio heavily favors the ASA therapy.

Wording is critical in our non-visual world …

Ammiel,
This very good question actually exposes a more significant issue regarding the definition of “not alert” as it relates to a patient’s ability to understand things, perform things, and even control their own airway. What constitutes not alertness is actually a broad spectrum that includes many levels of consciousness between abject unconsciousness and complete alertness (ask your local anesthesiologist). Not alertness lies in a band in between these two extremes and is not a specific,
singular point.

In 1967, the uni-named singer Donovan (of Mellow Yellow fame) had a lesser-known rock song, The Epistle to Dippy, that included the prescient, varied alertness-like lyric: “Through all levels you’ve been changing—elevator in the Brain Hotel—broken down, ah, just as well.” While the top floor here represents complete alertness and the ground floor completely unconscious, there are still 8 floors in between—and all of them represent a different level or degree of non-alertness.

Usually, a not completely alert patient (one on the “upper floors”) that is sitting up and can answer some commands is capable of chewing an aspirin—and, even if they don’t swallow it, there is enough buccal/sub-glossal membrane absorption in the mouth to make it somewhat effective—and this can occur more rapidly than by actually swallowing it, I might add.

A good clarifier then would be to simply ask the patient, “Can you chew this aspirin and then swallow it? It might taste bad, but that’s okay.” Using that or a similar type of verbal test, if they respond in any cogent, understanding way, they should be allowed to make the attempt to potentially save their own life.
Jeff Clawson, M.D.