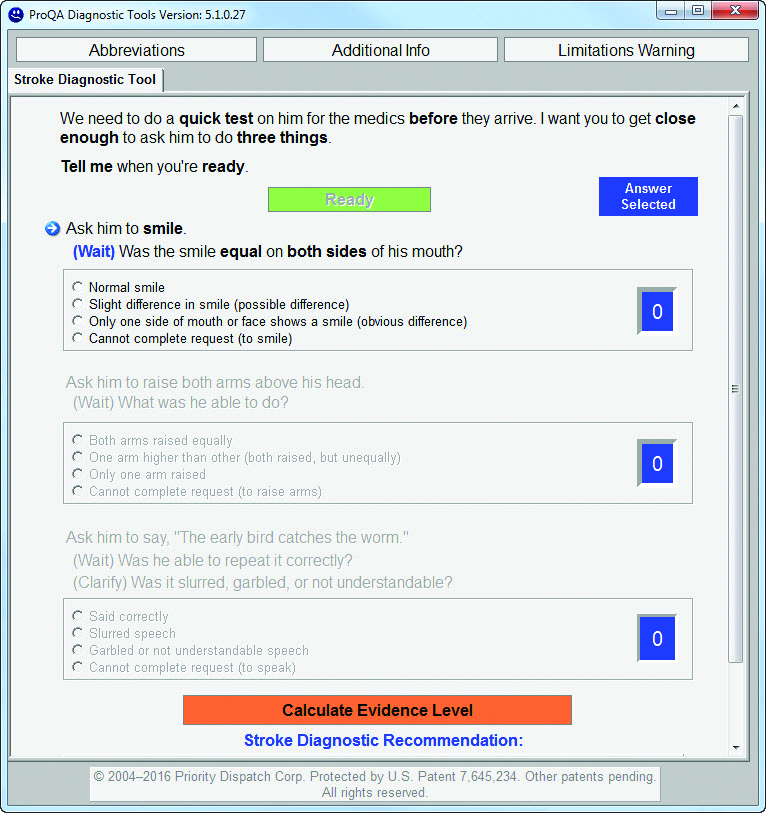 The Academy’s release of a new feature in protocol is the beginning of yet another avenue for further research. Take the Stroke Diagnostic Tool (SDxT) in Medical Priority Dispatch System (MPDS) Protocol 28 (Stroke [CVA]/Transient Ischemic Attack [TIA]), for example.

Research specific to the SDxT, conducted by the Academy’s research team, analyzed stroke data from three sources collected using MPDS v12.2 in the software engine ProQA. The study was conducted to assess the SDxT’s effectiveness, with the ultimate goal being to identify strokes promptly and accurately. The SDxT also provides pertinent information that comm. centers could use, according to local policy, for early notification of an incoming stroke patient to stroke center personnel for timely treatment and administration of tissue plasminogen activator—a drug designed to work by dissolving the clot responsible for the stroke and improving blood flow to the part of the brain being deprived of oxygen.

The three sources released data from the point of dispatch, allowing the Academy’s research team to determine the sensitivity, specificity, and predictive values of the SDxT. Study results were generated by comparing SDxT findings with both the EMS responder findings on scene and final hospital discharge diagnosis.

There were also a number of strokes, identified in EMS, where the SDxT was not used. For example, while stroke might be the underlying cause of other situations or conditions, the EMD’s immediate attention would focus on a protocol other than Protocol 28 to stabilize the patient for transport. However, the high sensitivity of the SDxT could make it ideal for identifying potential stroke patients coded using Protocol 26: Sick Person or Protocol 17: Falls due to reported stroke-like symptoms.

An EMD can start the SDxT in response to patient answers to six symptoms listed in Key Question 3 in Protocol 28, which the EMD selects for the conscious and breathing patient and when the caller initially reports “stroke” or the sudden onset of one or more of the symptoms. Once the tool is activated, the EMD asks the patient (or, more likely, a second-party caller) to perform three actions in a quick test to identify CLEAR, STRONG, PARTIAL, or No evidence of a stroke, as quantified by the patient’s ability to perform the three tasks on SDxT (smile, raise both arms above head, and say, “The early bird catches the worm”).

The numerical value indicating level or absence of stroke can be sent automatically to EMS responders or directly to hospitals as units begin response. The SDxT automatically presents on the computer screen during the questioning sequence of Protocol 28. The EMD has the option of manually selecting the SDxT when using a protocol other than 28, although, in the data analyzed, the option is rarely exercised.

The study led to two interesting and mutually inclusive results. First, findings showed that the SDxT has a high sensitivity in identifying strokes, confirming its value for early recognition strokes and providing early hospital notification. Second, research determined that expanding dispatcher use of the SDxT to include cases within Sick Person and Falls would likely improve its sensitivity even more.