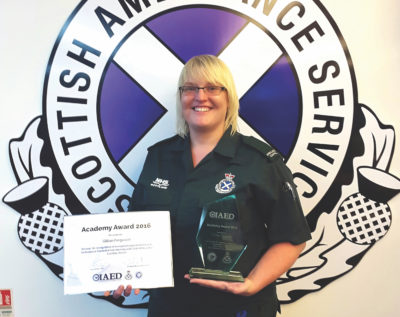 The recipient of the inaugural dispatcher award at the Scottish Cardiac Arrest Symposium for emergency communication had less to say in her acceptance on stage than the presenters.

That’s because Gillian Ferguson is accustomed to staying out of the eyes of the public and, quite honestly, she definitely prefers it that way.

“I’m a shy person,” Ferguson said after she received the award on June 24. “I’m not one for stages. That’s not the nature of our job. We’re in the background.”

Talking to Ferguson, it’s easy to understand why her team at the Scottish Ambulance Control Centre (ACC) nominated her. A dispatcher for 13 years, and a calltaker for one year before that, she sounds genuinely enthusiastic and conscientious about what she does.

“I am very happy at the job,” she said. “We make a difference. I can go away from my shift knowing I helped a patient and the family, and when the crew says ‘we’re glad we have you today,’ that’s nice. It’s a good thing.”

The Academy Award, as it’s named, is a joint sponsorship between the Resuscitation Research Group at the University of Edinburgh, Scotland, and the International Academies of Emergency Dispatch (IAED), in Salt Lake City, Utah. It was established in recognition of the emergency dispatch profession and partnership forged between the two organizations.

“The partnership is incredibly important to the Academy,” said Jerry Overton, IAED Accreditation Board Chair, who with Dr. Jim Ward, Medical Director, Scottish Ambulance Service, presented the award. “This is the first partnership of this type for the Academy and with an award that acknowledges our joint dedication to increasing the survival from out-of-hospital cardiac arrest (OHCA).”

Ferguson was among five nominated from the Scottish Ambulance Service control centers. The service has three centers in Scotland (Edinburgh, Glasgow, and Inverness), and each uses the Academy’s Medical Priority Dispatch System (MPDS). She had been notified about the nomination, and, on the day of the symposium, she was told she would be going on stage to accept the award.

“I was quite shocked,” she said. “You don’t do this job because of the recognition. We are the first contact but, for the most part, the public doesn’t know what we do.”

Facebook posts congratulating Ferguson prompted her to thank everyone in return:

“Can I just say a massive thank you to everyone for all your kind messages today, I’m really honored. As the saying goes, ‘There is no I in Team,’ so a special big thanks to all my teammates for their support today and every day in ACC and also the nominations! Go team!”

According to her nomination: “Gillian is an outstanding dispatcher and her whole team would love to see her get the recognition she most definitely deserves. [She is] very attentive when dealing with OHCA. Understands the process and need for allocating appropriate resources and does everything she can for the patient and crews attending. Gillian always puts patients first and goes out of her way to ensure they are getting the best possible response. She is a very active member of the team, supporting them when necessary, especially during major incidents. She is sure to check on a patient’s condition once the crew has cleared from the incident as she is genuinely concerned for their welfare. She is also conscientious to check on the welfare of her crews when dealing with difficult incidents and is well known by the staff across all east divisions as being incredibly helpful, friendly, and professional.”

Overton acknowledged the critical link that every EMD automatically assumes in the chain of emergency response.

“There is no one real winner of the award,” Overton said. “Every dispatcher is a winner. This is an incredibly stressful job just like it is stressful for those in the field delivering the care. EMS is a team approach, and your careful use of the Protocol has saved countless lives.”

“You guys do an amazing job,” he said. “You’re not generally visible on the front line but absolutely critical to the chain of survival and the successful outcomes of patients.”

Overton said their role couldn’t be stated too strongly, particularly in association with four primary factors in early recognition and treatment of OHCA: early recognition that a cardiac arrest is happening; early CPR to buy time; early defibrillation to restart the heart; and early prehospital Advanced Life Support (ALS).

Overton said call handlers and dispatch participate in each phase and, as part of the process, the relatively unspoken responsibility of ALS deploying and redeploying.

“I was told about one dispatcher handling five cardiac arrests on one shift,” he said. “The dispatcher had to deploy ambulances and redeploy the remaining ambulances to make sure response times were met.”

Scottish Ambulance Service runners-up for the award included Robert Pearson, an ACC Supervisor, and Caroline Shand, an Emergency Call Handler. Rounding out the exceptional group of nominees were Linda Burns and Alistair Strachan, who are both call handlers.

A second major honoree, Fiona Laing, received the Newton Award, established by Gregor and Judy Newton to recognize the outstanding work of EMS in Scotland.

Gregor, who spoke at the symposium, lauded Scotland’s EMS community.

“I didn’t realize until later how lucky I was, and the first thing that struck us was the number of people involved in saving my life,” said Gregor, who was accompanied by his wife and their children on stage. “There were probably 14 people, which is really humbling.”

Laing is Community First Responder Coordinator, Pirnmill, Isle of Arran, Scotland. The community first responders are trained volunteers responding to medical emergencies while the ambulance is on its way and alerted through the communication center.

The symposium’s theme, SHIFT Happens, refers to the changes happening in the way OHCA patients across Scotland are resuscitated. Approximately 3,500 people in Scotland each year undergo attempted resuscitation after OHCA, but currently only around 1–20 survive to hospital discharge. The OHCA strategy for Scotland includes:

An increase in survival rates after OHCA by 10 percent across the country, and saving a total of 1,000 additional lives by 2020.

An increase in the number of individuals learning CPR, with a projection of adding another 500,000 people with CPR skills by 2020.

According to the report outlining Scotland’s strategy, “The ACC is the center of the coordination of all the resources involved in the prehospital care of out-of-hospital cardiac arrests,”1 and call handlers must be effectively trained and supported to then reliably use the triage tools available.”

This was the fourth annual Scottish Cardiac Arrest Symposium hosted by its sponsoring agency, the Resuscitation Research Group at the University of Edinburgh. The 19 speakers and award presenters featured at the one-day symposium included EMS physicians, paramedics, community first responders, educators, and representatives from Save a Life for Scotland.

Lisa Macinnes, National Program Manager, Save a Life for Scotland, and Lead Research Nurse, Emergency Medicine Research Group of Edinburgh, said gratitude shown to emergency dispatch at international summits, such as the symposium, is indicative of the respect the profession holds in the OHCA Chain of Survival.

“They are vital people who never see a cardiac arrest as part of their work,” Macinnes said. “But they hear it in the fear of every word the caller says. They’re crucial, and their work has saved countless lives.”

About the Resuscitation Research Group at the University of Edinburgh

The Resuscitation Research Group at the University of Edinburgh is a collaborative involving the university, the Scottish Ambulance Service, and the Emergency Department at the Royal Infirmary in Edinburgh, along with other academic and industry partners. Dr. Gareth Clegg, Senior Lecturer, University of Edinburg, and Honorary Consultant, Emergency Department at RIE, leads the RRG.

The group’s research centers on optimizing the management of critically ill patients and includes the physiology and clinical management of out-of-hospital cardiac arrest, non-technical skills in time-critical resuscitation, the physiology of fluid resuscitation, and the psychology of critical interpersonal interactions during the chain of survival.

Does the protocol really work globally?