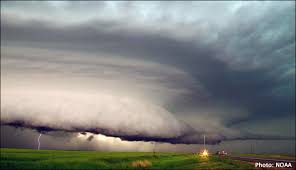 Wind. Sustained wind rivaling that of a tornado's touchdown. An immense swath of incredibly strong wind and heavy rain toppling utility lines and poles, fences, crops, and metallic bins. Wind tearing trees from the roots and toppling them onto roofs. Winds blowing over semitrucks and mobile homes. Wind like you’ve never heard before.

Wind causing damage like Joseph McCarville had never seen during all his years in Iowa (USA). 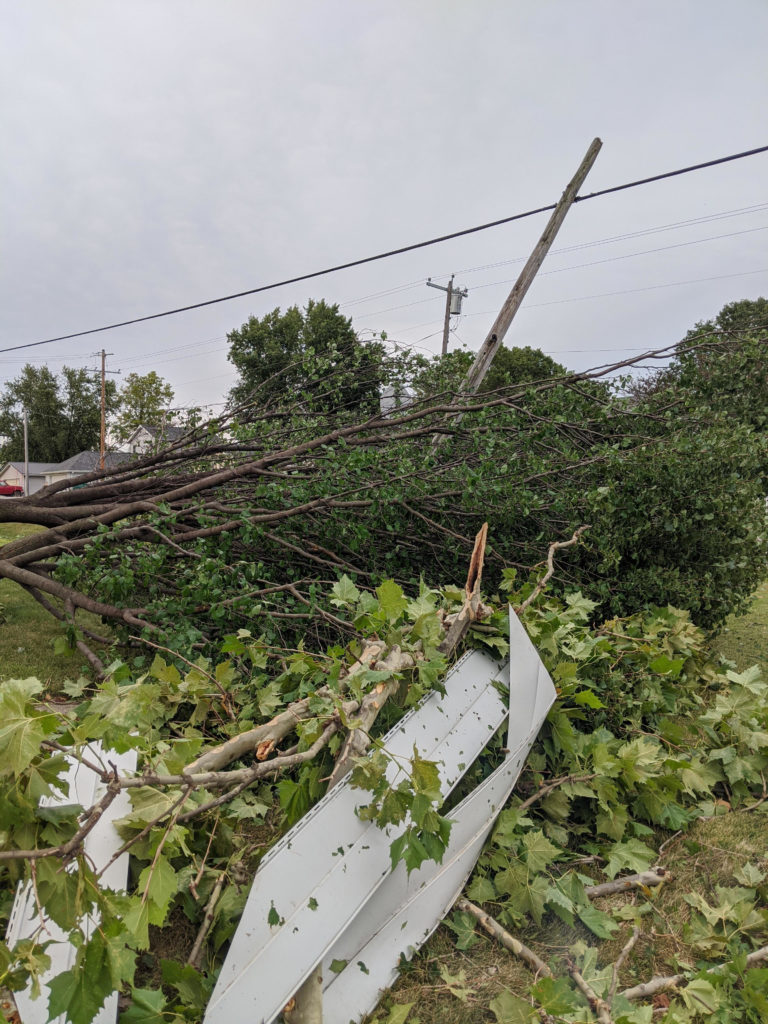 McCarville is describing the derecho (pronounced deh-REY-cho), an intense straight line of windstorms that pummeled millions of acres—rural and urban—from Nebraska to Indiana on August 10. Though the damage they inflict is like that of tornadoes, there’s a key difference: Unlike the spiraling winds and winding paths of twisters, derechos tend to move in one direction along a relatively straight line. Their path of destruction is also relatively linear.1

Of the line of Midwestern states affected, eastern Iowa was hardest hit. Winds measuring 99 miles per hour with gusts up to 140 miles per hour—equivalent to a Category 2–4 hurricane—devastated corn and soybean crops, peeled roofs and shingles off homes, crushed grain bins, and caused millions of dollars in damages to infrastructure. The inland hurricane, as it has been called, left hundreds of thousands without power for days, months of cleanup, and a calling card of unforgettable chaos and devastation.

The day (August 10) started as a fairly nice summer day in Cedar Rapids (Linn County, Iowa). Blue skies. Sunshine. Humid. It didn’t last. The sky darkened as the 700-mile-long storm approached from the west. Tornado sirens went off at 12 p.m. By 12:34 p.m., the storm hit the JCCO building and, in preparation, stations closest to their third-floor windows were moved and the blinds closed to avoid injury in the event winds shattered the glass. Then, the calls started coming in.

“We were inundated,” McCarville said. “911 calls were automatically routed to other agencies when our line filled, but it was the same for 911 centers in the area. The agency to the south was bombarded with calls. This storm was so wide, it was impacting all of our backup centers. It took all kinds of communication to be successful.”

Cedar Rapids was one of the hardest hit cities in the state. More than 800 buildings suffered partial collapse of the roof, walls, ceiling, or floors, and more than 20 schools sustained damage.2

Eric Dau, Manager, Clinton County 911, knew they were in for a serious storm once he heard it hit Cedar Rapids (75 miles west of Clinton). Although working from home, Dau was determined to make the generally 20-minute drive despite the now severe wind and rain. Dodging downed trees and power poles and doing what he could to avoid projectile debris, Dau, a Clinton County volunteer firefighter and paramedic, stopped his vehicle only once to check an overturned moped on the side of the road. All was well and, again, Dau continued and soon joined a team he can’t seem to praise enough.

“It was mass chaos,” he said. “Radio down. 911 ringing off the hook and 190 calls waiting in CAD. We train and train, but how do you train for something of this magnitude? It was frightening and so little time to prepare. They all responded fantastically.”

Satisfied the staff had the situation under control—as best they could—he and three supervisors banded together in the emergency operations center and communicated with other local public service agencies, such as the power company and transportation department, to develop a plan. A 911 trainee was transferred to the administrative line, which was a huge asset, he said, in answering non-emergency calls.

“People wanted to know when the power would be back,” he said. “What they could do about food. She provided information, while the others prioritized response to the emergency callers. The fire department could bring oxygen to people on ventilators and without power. People were trapped in houses from downed trees. No stoplights.”

It wasn’t until close to midnight that the phones settled down. During those 11 hours (1 p.m. to 12 a.m.), Clinton County 911 took 700 calls, more than six times their daily average.

Cameras mounted on top of the Muscatine County Public Safety building did not give a clear visual of what was going on outside to emergency dispatchers in their center two floors underground. The National Weather Service (NWS) issued a severe thunderstorm warning, rather than a tornado warning, since “by their definition derechos are wind events produced by severe thunderstorms.”3 Sirens went off and five minutes later, at about 1:50 p.m., it had reached the county.

Muscatine County Joint Communications (MUSCOM) Manager Christopher Jasper took a console alongside emergency dispatchers Lisa Sutton and Chelli Martin, and for the next nine hours they barely moved from the phones and radio. (Note: An article about Sutton’s and Martin’s experience that day is chronicled in this issue’s Your Space section.)

“All of a sudden it was there,” Jasper said. “We watched the videos later and that’s when I understood the volume of calls. Phones ringing off the hook. More widespread damage than we get with a tornado. This was everywhere and it lasted a long time.”

To give an idea of the derecho’s width, consider the distances between Muscatine County and Clinton and Linn Counties. Muscatine County is 58 miles northeast of Clinton County and 64 miles southeast of Linn County. In less than 90 minutes, the derecho, which can span from 30 to 50 miles wide, had entered each of the counties. Aside from its length (700 miles), a derecho has a tremendous forward speed; it is not uncommon for a derecho to move at 60 to 70 miles per hour.4

As reported by the centers in Linn, Clinton, and Muscatine counties, they had little preparation time. At such speeds, people caught out in the open do not have much time to seek safety.

For Dau, trees were already bending in the few minutes it took to get inside his vehicle and drive in what he said “was a bad situation,” requiring multiple detours. McCarville said the calls didn’t go away after the 45 minutes the storm lasted. The first day was storm-related and then the call volume shifted to city services to clear roads, fix the power, and control traffic at intersections losing stoplights. With power outages lasting four to five days in Muscatine County, volunteers set up cooling shelters and provided bottled water. Neighbors pitched in clearing up downed trees and, as a community, held everything together.

The real stars of the show, however, are the emergency dispatchers.

“I couldn’t ask for a better staff,” McCarville said. “They responded phenomenally, coming in not being asked and staying five and six hours without being asked. Dispatchers staying though their homes were damaged. Dispatchers checking on each other, staying in touch. I couldn’t be more proud of my staff and what they did that day.”