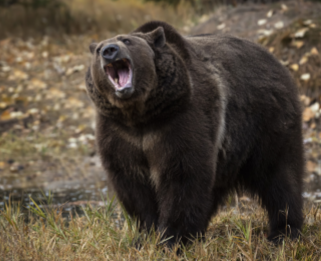 Twice Is A Charm for Montana Man

Some people go their entire lives without calling 911.

Others find themselves in circumstances requiring a call to 911 and are saved not once, but twice by EMDs giving lifesaving instructions prior to the arrival of response on scene. For example, take Peter Scherfig of Big Sky in southern Montana (USA) and the assistance he received from EMDs at Gallatin County 911.

Scherfig was celebrating his 61st birthday on Memorial Day 2020 mountain biking along a trail not far from his home. The trail is popular among mountain cyclists, and Scherfig, keenly aware of the presence of grizzly bears, was on the alert to avoid an encounter. Scherfig was no novice to Big Sky backcountry, having settled in the area nearly 50 years ago.

No matter how prepared or tuned to the surroundings, the unexpected does happen. In what Montana Fish, Wildlife and Parks officials considered a surprise defensive encounter—and not predatory—a grizzly bear mauled Scherfig, causing severe injuries to his face and neck. Scherfig, an avid outdoorsman, somehow crawled from trail to a road traversing the mountain side.

Scherfig’s wife, Katie Craig, was home when the sound of sirens caught her attention. Shortly after came a phone call from Joe Jacobs, the person who found a bleeding Scherfig sitting on the roadside.

“Peter tried to write in the dirt ‘bear,’ and then Joe got out a piece of paper for him and he wrote ‘bear’ again and ‘can’t breathe’ and wrote down my name and phone number,” Craig said.1

Jacobs administered first aid for traumatic injuries relayed by a Gallatin County 911 EMD. Scherfig was taken by ambulance to Big Sky Medical Center and flown to Billings and, from there, Portland, Oregon (USA), for further treatment for severe cranial and facial injuries.

Scherfig made a full recovery, although his face does show the scars of the bear’s attack.

Several days later, Scherfig was well enough to attend his son’s wedding, and soon after, an ever-thankful Scherfig and Craig grabbed their mountain bikes for a spin from home to the Big Sky Fire Department. They presented a commemorative lifesaver pin to Walker. Scherfig said that he was simply happy to have survived the two incidents and was able to be able to stand with the group to tell his story. “I am so glad to be here,” Scherfig told the small crowd. “I’m truly, truly thankful for everything.”2 Craig praised Walker for her “calmness, kindness, and reassurance during their call.”3

Walker said an EMD’s ability to calm a caller and provide compassionate care is integral to the profession. It’s also part of her caretaker nature, she said.

An emergency dispatcher since 1998, Walker was 17 years old when her father went into cardiac arrest at their family farm. He did not survive. A call from a 16 year old that Walker took while in emergency communications involved a similar incident. The teen called 911 for his father, who had collapsed from a heart attack.

“I felt for him,” said Walker, who provided step-by-step CPR based on results of the MPDS® Breathing Verification Diagnostic Tool. “I stayed with him. I knew what he was going through.”

The father’s survival was attributed to the CPR instructions provided.

And similar to the connection she had with Craig while giving her CPR instructions to revive Scherfig, Walker said she is grateful that she can be there for others. “It’s a blessing to be the person who walks them through,” she said.