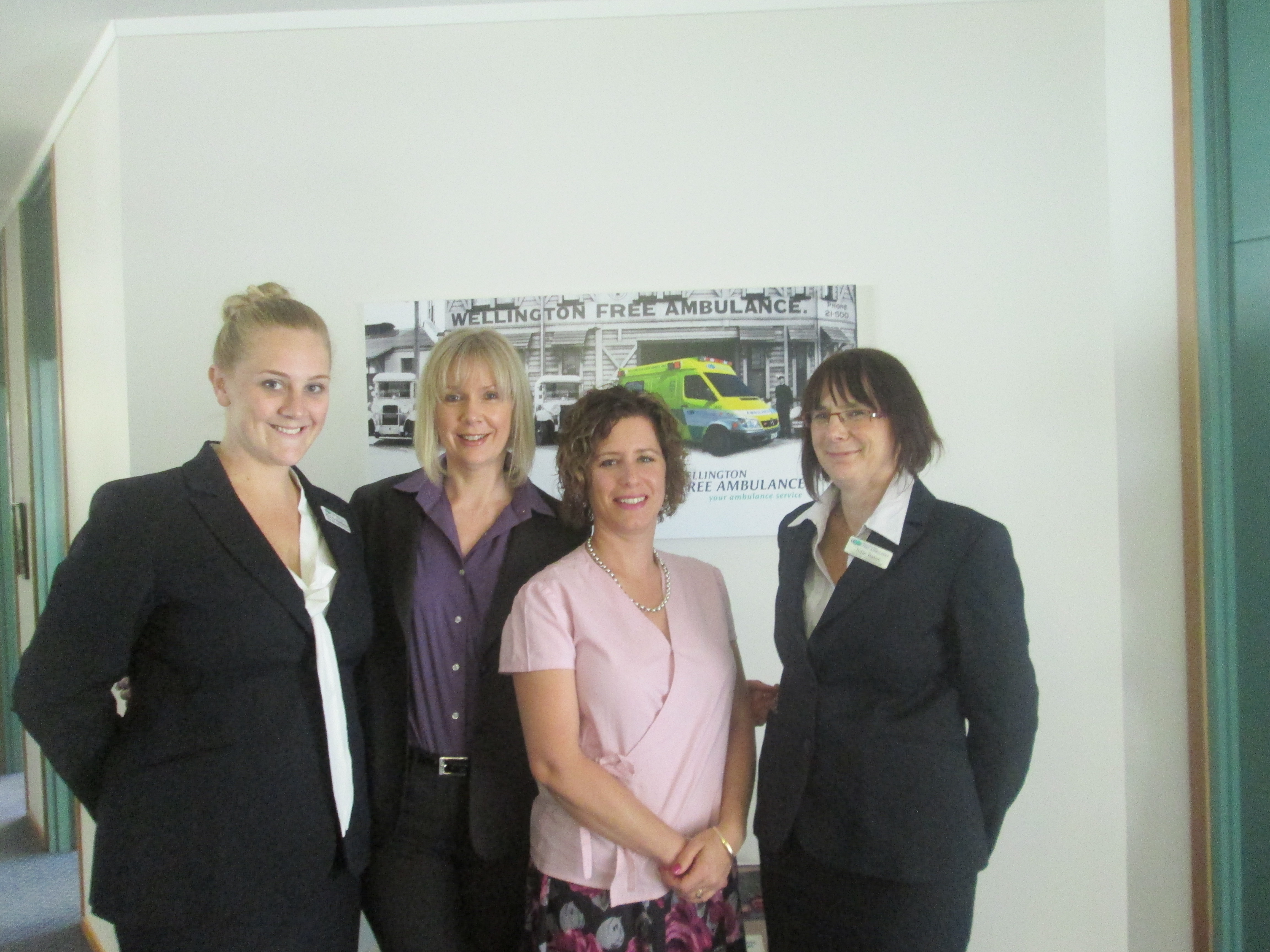 Three is a party

From “The Three Musketeers” to the number of bones in the human ear, good things happen in threes, and as the “rule of three” (in Latin "omne trium perfectum") principle suggests, things that come in threes are perfect.

Why? Because that’s how the mind works. We look for patterns and trends, and three is the number we’ve assigned since the third century.

Good things happen in threes and, in the case of three communication centers in New Zealand and the Republic of Ireland, there are not the two without the third.

The rule of three was in full force on July 7, 2017, when New Zealand’s three communication centers were approved for accreditation.

“This was always part of their plan,” said Louise Todd, Clinical Support Officer, Priority Dispatch Corp.™ (PDC™). “They’re under an umbrella of one agency, so they are working toward the same standards [represented by the ACE].”

They hadn’t actually considered going ACE separately, and it was time, she said, to finish a project that required an extra push in one of the Twenty Points of Accreditation.

“All the parts were met except for compliance in our PAIs,” she said. “We don’t get a lot of calls requiring them.”

The opportunity to provide PAIs was similar in all three centers. EMDs needed practice and coaching, but how could McConchie support staff at three centers, in a consistent way, and all at the same time?

McConchie had an idea.

She went to the PDC National Q to have them evaluate their QA process objectively and provide unbiased suggestions for improvement through their observations and discussion of current practices. National Q’s worked with in-house Q’s, offering pointers for call review and following performance standards, offering direct coaching, and giving constructive feedback.

The approach supported what McConchie knew they could achieve. The in-house Q’s coached from the floor and focused on the behaviors that needed changing. They could move forward. They were working toward the same ACE goal in tandem despite being in separate locations.

McConchie submitted all three applications through the online accreditation portal.

Todd was in charge of reviewing the applications, which included uploading 25 calls from each center recorded the prior month. She completed a checklist of the Twenty Points of Accreditation and rated the calls according to the Academy’s performance standards. Although time-consuming, particularly the call review, she turned the applications over as quickly as possible.

“I know how anxious agencies can get,” she said.

Todd approved each application, making the next step on-site visits, and, in the last stage, submitted the complete package to the Academy’s Board of Accreditation. Finally, McConchie answered the phone call she had been anticipating.

“I was thrilled,” she said. “We were so stressed out, and after the call I was speechless. This was a huge project. Everyone did such an incredible job.” 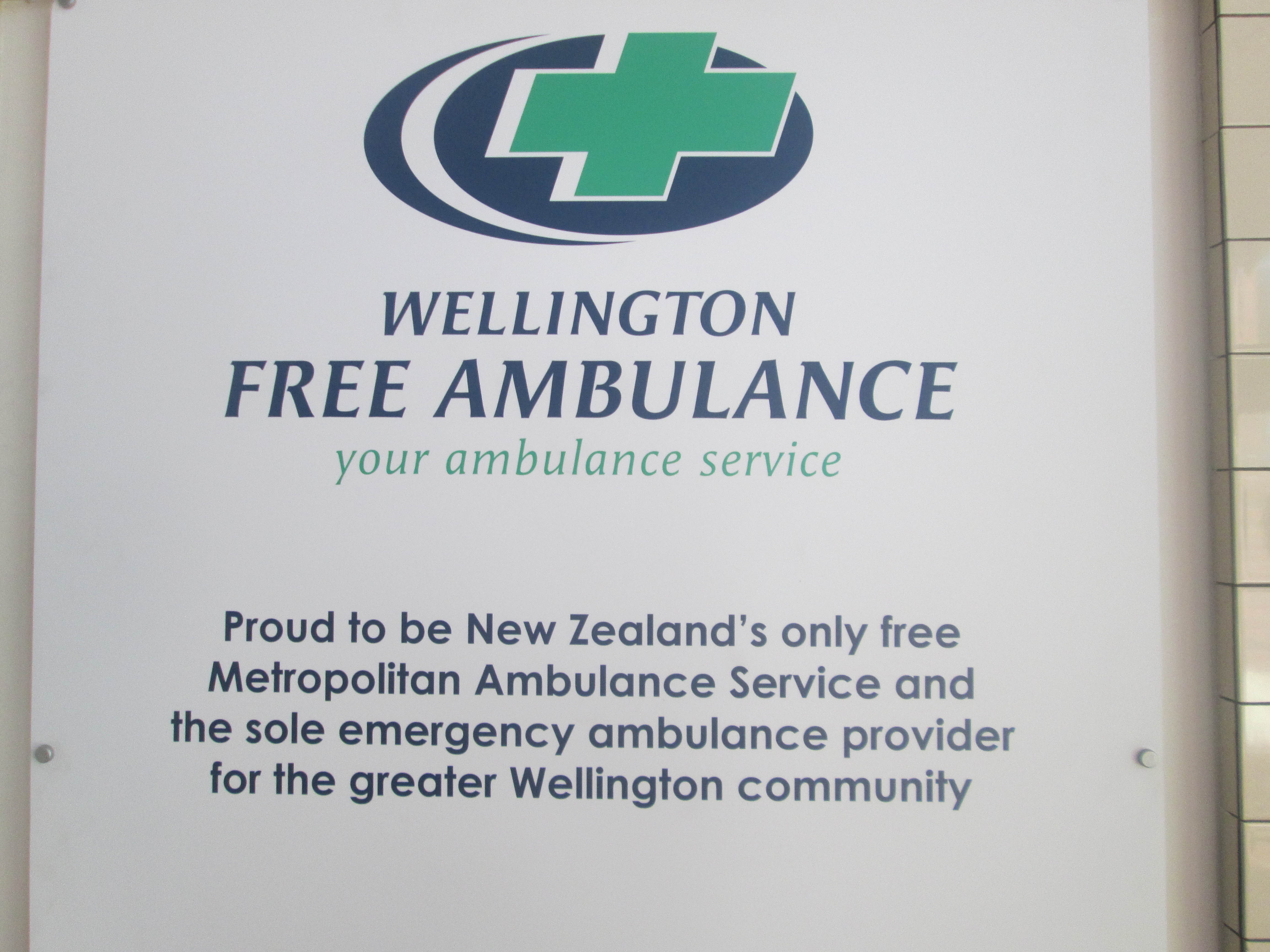 The three communication centers—St John Ambulance Service with locations in Auckland and Christchurch and the Wellington Free Ambulance (WFA)—merged in 2007 to provide a virtual single system of emergency communication to 4 million residents and millions of vacation and business travelers visiting the country each year (estimated 3.6 million in 20171).

The merger created a national ambulance communication service, similar in concept to the country’s national fire service created in 1975, which—in each case—provides advantages in cooperative training, purchasing, maintenance, and other support. A single network connects the centers, and each center has remained in its pre-merger location. Each manager reports to the centralized Operating Board.

“We’re a team,” McConchie said. “The next available calltaker at any of the centers takes the call. If a computer goes down, or if something else happens, we can still handle the call.”

WFA celebrated its 90-year anniversary in 2017, having been founded by the late Sir Charles John Boyd Norwood on Nov. 9, 1927. It remains the only completely free ambulance service in the country and, as it's understood, the world.2

The way it works

When an emergency call (111) comes in, the Emergency Ambulance Communications Centres (EACC) provide the connection between caller and Emergency Ambulance Service providers. Calls from the North Island and the South Island are answered at centers in Auckland and Christchurch, respectively. Calls made in central New Zealand are answered by EMDs at Wellington Free Ambulance Headquarters in Wellington at North Island’s southern tip.

If all calltakers are busy at any one of the centers, the system redirects the call into the national queue for either of the two other centers. The EACC CAD system also maintains real-time information on the majority of ambulance resources available for deployment.

Nationally, there are more than 445,000 111 calls for ambulances each year, and the number continues to grow about 3 percent each year. They dispatch a fleet of more than 600 ambulances, 250 rural doctors and nurses, 40 emergency helicopters, and the Coast Guard. They also coordinate patient transfer services for district health boards.

During the noon hour on Feb. 22, 2011, South Island was struck by a 6.3 magnitude earthquake. Within minutes, the number of incoming calls tripled, with geographic distribution confirming that the Christchurch Metropolitan District was hardest hit.

Due to the quake, the local ambulance service lost its CAD, and the New Zealand Civil Defense Agency lost its ability to communicate with police and fire in Christchurch.

All rural and suburban calltaking and dispatching duties were shifted to the Wellington and Auckland centers, giving EACC dispatchers in Christchurch the ability to focus on emergency response within the Christchurch Metropolitan District. With its communications facilities fully operational, the Christchurch center became the hub of response activities in the city.

Even with suburban and rural calls diverted, however, the Christchurch EACC workload was significant. Dispatchers triaged calls and assigned them to police and fire crews, tracked ambulance requests manually, and used runners to communicate with Civil Defense.

In the hours after the earthquake, police and fire in the metropolitan area had from six to 24 calltakers and dispatchers in Christchurch triaging about 1,200 emergency calls and deploying personnel through the nationalized system. Within 18 hours, rescue crews from other districts arrived in Christchurch to assist with event response. 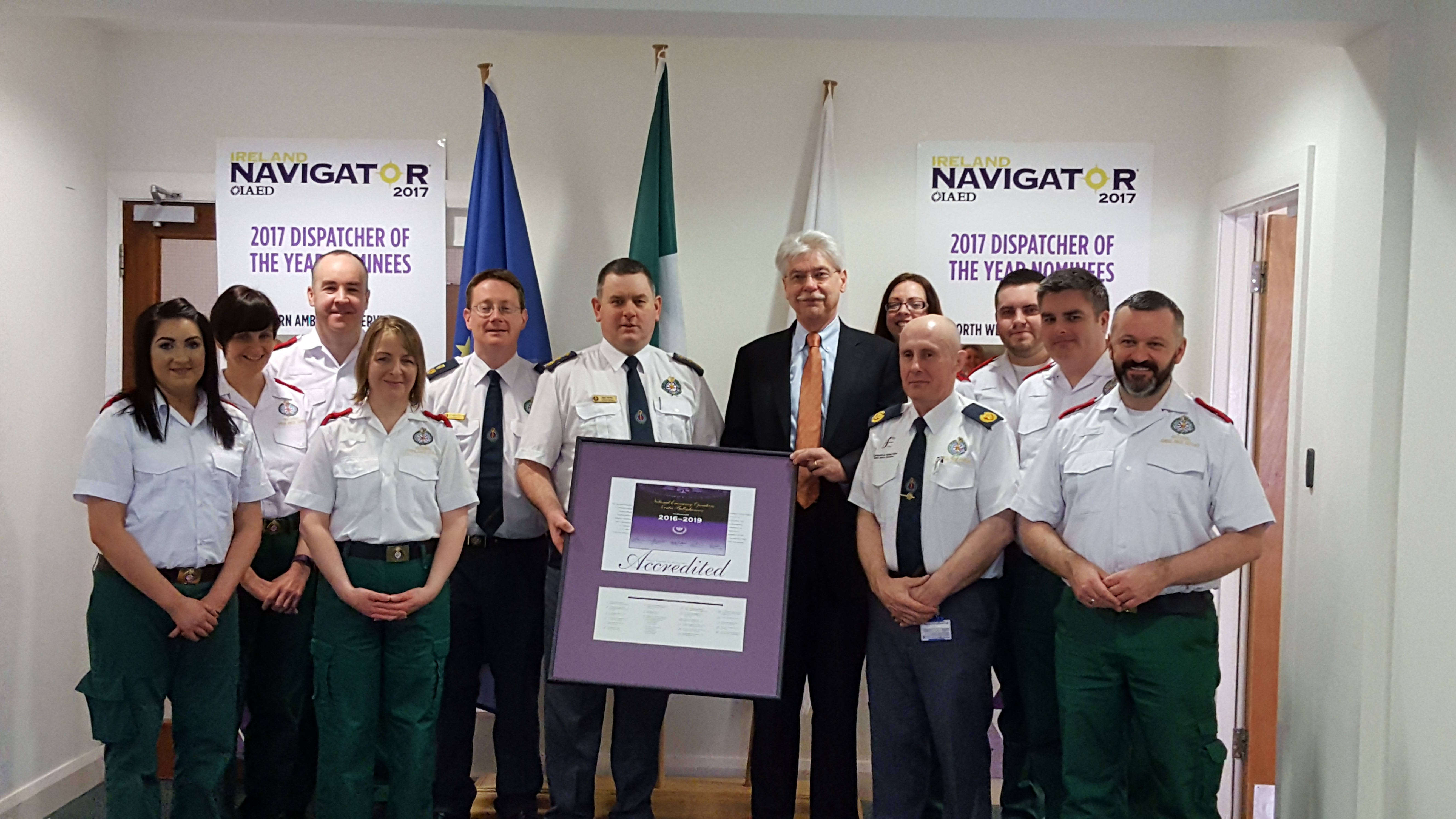 The Republic of Ireland’s three communication centers achieved accreditation singly, although they do share a history of using the Medical Priority Dispatch System (MPDS®).

The National Emergency Operations Centre (NEOC)—with centers in Tallaght, Dublin, and Ballyshannon, Co. Donegal—was accredited in 2015. The Eastern Regional Control Centre (ERCC), which works with the Dublin Fire Brigade (DFB), was accredited in 2006. All three centers have been using the MPDS for more than a decade.

The NEOC works in conjunction with the National Ambulance Service (NAS), with the two centers serving all 4.7 million residents of the Republic of Ireland (excluding the area served by the ERCC). Calls to the two emergency lines, 999 and 112, are connected to an emergency service operator who directs the call to the appropriate emergency service.

Two operate as one

Similar to New Zealand’s network, the NEOC operates across two sites on a singular Information and Communications Technology (ICT) platform. The two centers—working as one—were created as part of the NAS Control Centre Reconfiguration Project to centralize operations.

The newer of NEOC’s two centers is in Tallaght. It opened as the main call center in July 2015, integrates six regional services and is backed up by the control center in Ballyshannon. The center in Tallaght also houses the National Ambulance College and the National Aero-medical Coordination Centre. The college trains calltaking and dispatch staff, EMTs, and paramedics and advanced paramedics.

The NEOC is partnered with the NAS, and together they serve all 26 counties of the Republic of Ireland, an area of 27,133 mi2 (43,666 km2). According to NEOC Manager Kathrina Murray, the center dispatches around 320,000 calls per year, everything from cardiac arrests to traffic collisions.

The center, which is staffed by 155 personnel, dispatches medical calls to 92 ambulance stations. In addition to calltakers and Emergency Dispatchers (EDs), the NEOC also has Aero Medical Dispatchers—dispatchers who coordinate helicopters for both the Irish Air Corps and the Irish Coast Guard.

But it’s not all work without play.

The NEOC Triathlon Team encourages dispatchers to get up and go for a run, cycle, and swim.

“It’s not about winning,” Murray said, “but taking part together.”

Murray said the NEOC promised the public the best possible over-the-phone care it can offer and, by aiming for accreditation, staff members allowed themselves to reach the highest standard possible and maintain professionalism.

According to Murray, the ACE process went without a hitch. The staff was proactive, and when they first achieved compliance scores over a three-month period, they never looked back. She advises other centers to remember that accreditation belongs to the entire staff; no single person can take the credit.

Nestled on the banks of the River Liffey, the city of Dublin has been around for more than 1,000 years. English and Irish are the main languages, but there are significant parts of the population that speak Chinese, Polish, Russian, and French.

The Kilmainham Gaol, Trinity College, Saint Patrick’s Cathedral, and, of course, the world-famous Guinness Storehouse are among the well-known sites. The ERCC, in conjunction with the DFB, protects these important landmarks and more from the threat of fire.

The service area of the ERCC and DFB is 571 mi2 (920 km2), and they dispatch for 17 fire authorities and four EMS authorities. They field 40,000 fire and special service-related calls and 90,000 EMS-related calls annually. According to John Moody, Third Officer at ERCC, they typically handle calls about small outdoor fires and traffic accidents.

The center itself is staffed by 65 dispatchers, and Moody said they don’t experience high employee turnover. In fact, the ERCC has a zero percent rate of staff attrition, which Moody ascribes to a mixed staffing model designed to avoid burnout and other issues that may contribute to staff loss.

The ERCC has been an ACE since 2006—the first center to become accredited in the Republic of Ireland—and re-accredited in May 2017.

“The decision was based on the desire to show we followed internationally-recognized standards, thereby improving the service offered to our city and county,” Moody said.

There was a transitional period when progress was slow, but they worked through it with detailed training and continued support from both inside the center and the Academy.

For those considering ACE status, Moody advises taking the Twenty Points of Accreditation as 20 individual steps. He also said as an agency, they believe in two distinct practices: learning as much as they can by study and research and then asking for help with implementation.

Both centers are grateful for the help of Beverley Logan, Consultant, PDC; Kim Rigden, Associate Director of Accreditation, IAED™; and Todd, who reviewed the center’s ACE application.