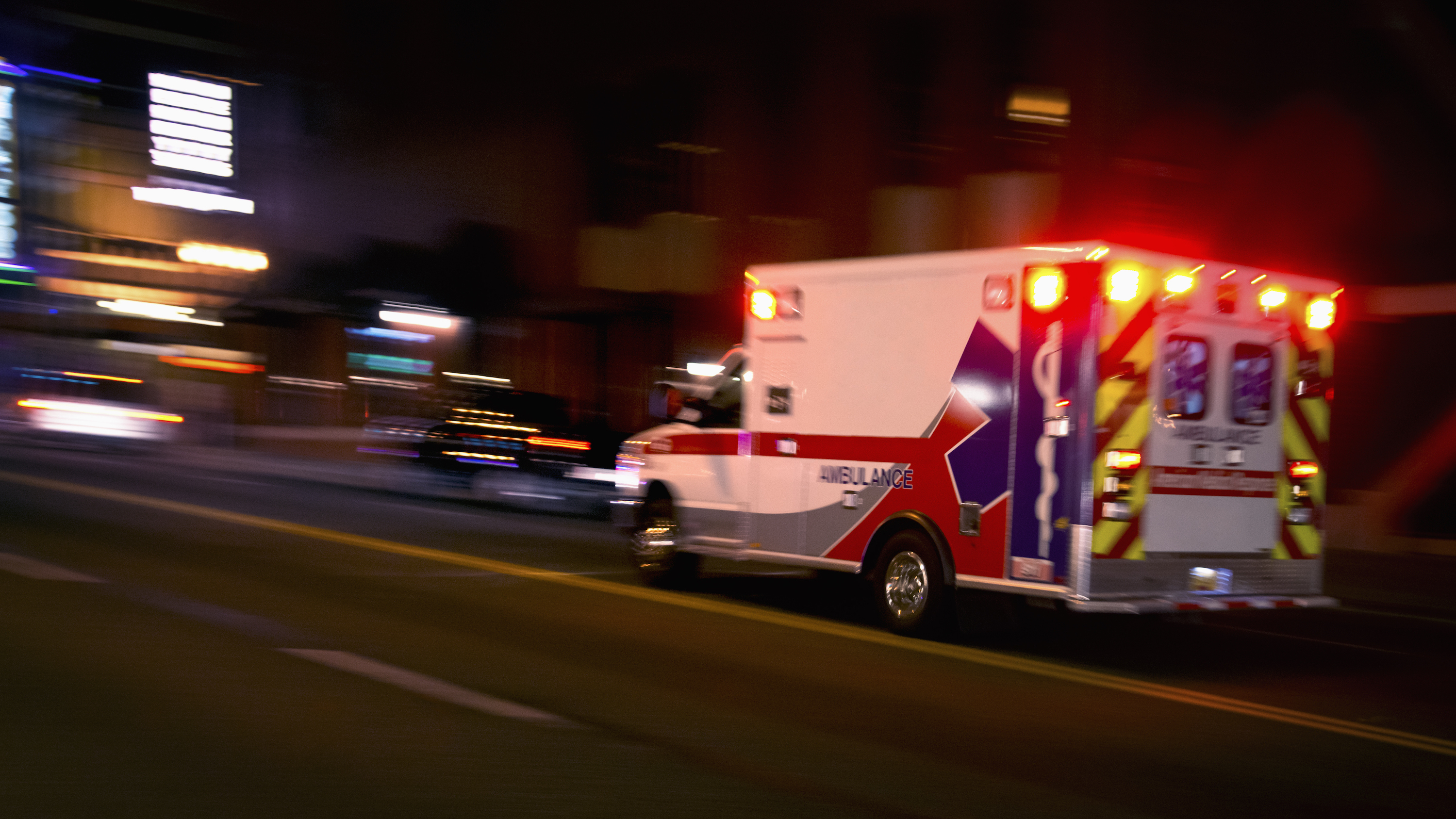 THE SOONER, THE BETTER 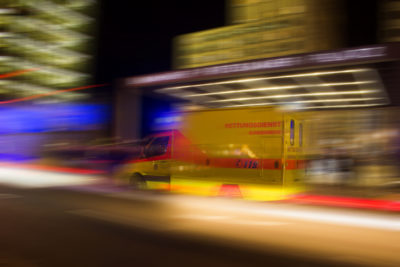 The sooner they can call it, the better the outcome will be.

That’s the philosophy behind the continued and intense development of EMS stroke protocols for Polk County Fire Rescue, Bartow, Fla., and the Stroke Diagnostic (Dx) Tool released in the Medical Priority Dispatch System (MPDS) Version 12.1 (2010) and most recently updated in MPDS v13.0.

The Polk County Fire Rescue guidelines, updated in January 2015, are tiered to identify a potential acute cerebral vascular accident (CVA) or stroke; categorize the severity of the CVA; and, based on severity, determine the appropriate destination (primary or comprehensive stroke treatment center).

The Stroke Dx Tool enables EMDs to notify stroke centers early in an effort to decrease the time from symptom onset to definitive treatment and help hospitals prepare and improve patient outcomes.

“Our goal is to get acute stroke patients to the right place in the right time frame,” Banerjee said. 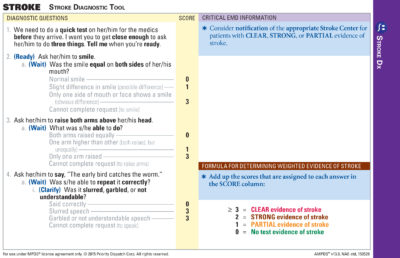 Stroke is a medical emergency caused by the blockage of oxygen-rich blood to the brain (ischemic) or sudden bleeding in the brain (hemorrhagic). A TRANSIENT ISCHEMIC ATTACK (TIA), or “mini-stroke,” is caused by a temporary interruption of blood supply to the brain, resulting in a sudden and brief decrease in brain function and STROKE-like symptoms, lasting one or two hours, but no more than 24 hours (MPDS v13.0, Protocol 28, Additional Information).

Symptoms—including sudden and severe headache; paralysis or numbness of the face, arms, or legs; and trouble speaking, hearing, or understanding speech—are associated with the part of the brain damaged. For example, stroke to the left side of your brain affects the right side of the body and, also, commonly results in some degree of aphasia (loss of the ability to understand or express speech).

Time is of the essence

“Time is brain,” said Banerjee, meaning that stroke care should emphasize the rapid and aggressive triage and intervention to prevent the irretrievable loss of nervous tissue as a stroke progresses and therapeutic intervention is delayed.

A stroke patient loses 32,000 brain cells every second and 500 miles of myelinated brain fiber every hour. The fatty substance myelin wraps around nerve fibers to increase the speed of communication. Banerjee said that the 500 miles of lost myelin fibers is equivalent to driving from Jacksonville, Fla., to Key West.

“Just imagine losing that much road every hour you experience a stroke,” he said, emphasizing the amount of damage during the first hour after a stroke occurs.

Treatment depends on the type of stroke and, in the event of TIA, it depends on cause, time elapsed from symptom onset, or when the patient was last seen normal and the patient’s other co-morbid medical conditions.

If a person is presenting stroke-like symptoms, immediately call 911 to initiate transport to the hospital. Paramedics will assess the patient’s motor deficits and mental status.

EMS transports approximately two-thirds of all stroke patients to hospitals and, according to Banerjee, these patients have much greater outcomes than “walk-in” patients to the emergency department.

“People undermine what they have,” he said. “They think they can drive to the hospital or have someone drive them. This wastes precious time to treatment, delaying time to a computed tomography (CT) brain scan, stroke team activation, and early neurology consults. Calling 911 and coming by ambulance can change the whole ball game.”

Polk County Fire Rescue evaluates patients for possible stroke based on the caller’s description using both the MPDS Stroke Diagnostic Tool—the first stage in prehospital care—and a modified version of the Los Angeles Motor Scale (LAMS), which is administered by the arriving paramedics. LAMS assigns points to symptoms—facial droop, arm weakness, and speaking—and the final score helps identify the level of motor deficit in the patient having a stroke. This helps Polk County Fire Rescue determine in the field the level of care necessary for the stroke patient to transport to either a primary or comprehensive stroke center.

Treatment can involve medication, mechanical endovascular interventions, and even surgery.

The only Food and Drug Administration (FDA)-approved medication for ischemic strokes is tPA, a medication that is used to dissolve the clots causing a stroke and improve blood flow to the affected part of the brain. If administered within three hours (up to 4.5 hours in certain eligible patients), tPA may help improve the chances of recovering from a stroke.

Polk County Fire Rescue also uses a Modified Rankin Score (mRS) to help identify patients eligible for comprehensive stroke care. The mRS determines the level of physical disability existing PRIOR to the stroke. The score ranges from 0–6, running from no symptoms to death.

More immediate access to treatment is available through a mobile stroke unit; the unit resembles an ambulance on the outside and on the inside is equipped to image the patient’s brain to detect the type of stroke and transmit patient symptoms to stroke neurologists at the hospital. An onboard medical team can initiate intravenous tPA to break up the clot.

The mobile unit available through Polk County Fire Rescue will be integrated into the 911 center and, if through questioning, and in conjunction with neurologists, the dispatcher concludes the patient is experiencing stroke-like symptoms, EMS and the mobile stroke unit can be dispatched to the scene.

The ability to initiate tPA therapy en route is a major advantage for patients experiencing an ischemic stroke—which account for 87 percent of all strokes—and offers patients better short- and long-term outcomes, Banerjee said.

“Door-to-needle time is essentially negative,” Banerjee said. “Treatment can be started as early as the ambulance ride to the hospital and neurosurgeons are waiting for the patient’s arrival.”

The Academy’s Council of Standards evolved and approved the Stroke Dx Tool to better predict the outcome of stroke early and the type of EMS response required, not only to enable early hospital notification in the interest of prompt and effective patient care, but as a study methodology to measure and improve the outcomes of stroke patients. The protocol was released and used extensively in the U.K. for about a year prior to the tool’s release in North America as part of Protocol 28: Stroke (CVA)/Transient Ischemic Attack (TIA).

Essentially, the Stroke Dx Tool involves a quick, three-item diagnostic test—asking the patient to smile (to check for facial drooping), asking the patient to raise both arms above his/her head (to check for weakness or paralysis on one side of the body), and asking the patient to repeat “The early bird catches the worm” (to identify any speech abnormalities). The Stroke Dx Tool is considered COMPLETED if any of the three requests are accomplished. It is considered NOT COMPLETED when none of the requests are accomplished. All Diagnostic Questions should be asked, regardless of whether any previous request was completed. If the caller reports a pre-existing speech or motor deficit during a test, the EMD should clarify if it is now worse than before.

Each question is scored, according to the patient’s response, with the distinction of stroke by the EMD based on identification of CLEAR, STRONG, PARTIAL, or No test evidence of stroke. The higher the patient’s score, the higher the likelihood of evidence of a stroke. The EMD should return to Protocol 28 after asking all of the Diagnostic Questions and make dispatch-level hospital stroke alert notification for patients identified with symptoms indicative of stroke.

While some agencies choose to limit response options by Determinant Level, i.e., sending the same response to all codes within a given level without specific regard to descriptor or suffix, many other agencies take advantage of the Protocol’s inherent response option design by utilizing the vast array of response options available, including the 12 determinant suffixes designed to pinpoint specific symptoms most predictive of stroke.

The Stroke Dx Tool has continued to evolve during the six years since its initial release, and the most recent version of the protocol system, MPDS v13.0, added the Stroke Dx Tool to Protocol 18: Headache to address the possibility of stroke according to symptoms described by the caller.

• Problem Suffixes to provide the Stroke Diagnostic Tool evaluation--CLEAR, STRONG, PARTIAL, or no test evidence--paired with the time frame of symptom onset

• New Axiom regarding the use of the Stroke Diagnostic Tool

Overall, Chief Complaint 28 accounts for about 1.4 to 2.0 percent of all MPDS cases. In comparison, Protocol 10: Chest Pain/Chest Discomfort (Non-Traumatic) accounts for about 9 percent, Protocol 6: Breathing Problems about 14 percent, and Protocol 26: Sick Person (Specific Diagnosis) about 10 percent. 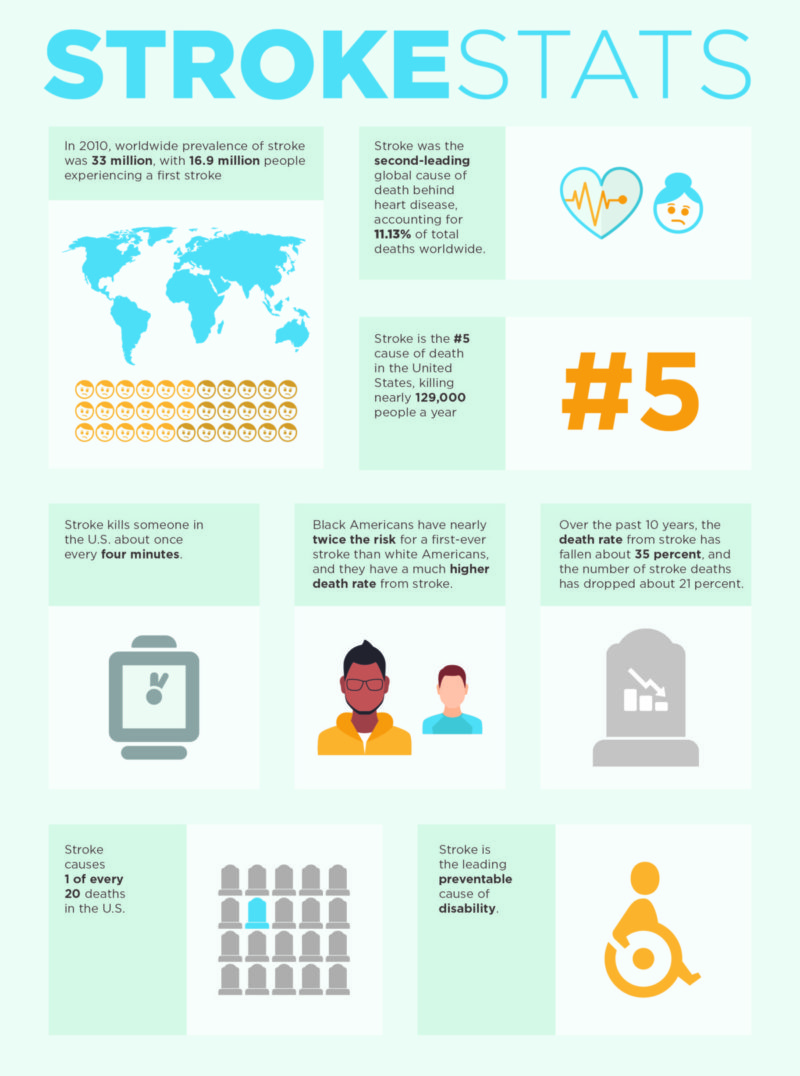 “Florida is God’s waiting room,” she said. “We are primed for this type of thinking. How can we intervene earlier and how can we incorporate the process earlier in the 911 call? We are always looking for better ways to diagnose them and get them in the field at the right time and to the right facility.”

According to the Academy’s official statement regarding the Stroke Dx Tool, the Academy is committed to setting the DLS standard of care for stroke patients. In short, the potential minutes saved through earlier stroke predictability and subsequent hospital notification are well worth the seconds spent administering this simple diagnostic tool that also enables better outcome studies in the interest of patient care.