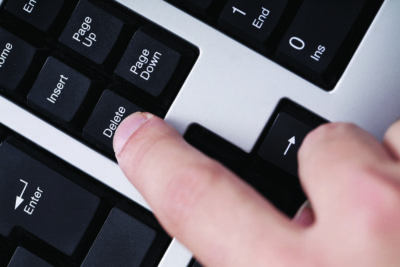 Is it possible to accidentally delete your AQUA and/or ProQA Paramount database? Anything is possible, but you would have to power through a couple of strategically placed “DO YOU REALLY WANT TO DO THIS?” warnings embedded in our software. Even then, there are default backups and hidden recycle bins that will save you in the event you did have a temporary OCD (Obsessive Compulsion to Delete) moment. This only counts if you’re happily deleting from an AQUA and/or Paramount workstation.

If you’re on the server, it’s much easier to accidentally delete. There are just two folders. That’s why server access is very limited and usually only available for IT types because the majority possess a non-delete gene. They’ll rename, move, and/or archive but are loathe to delete data files.

I worked with an agency that thought it had lost an entire year’s worth of AQUA case data. There were hundreds of completed call reviews in two separate case lists. They wanted to run their ACE reports on these for re-accreditation purposes. The QI manager had been performing some house cleaning and accidentally deleted them. They were understandably in a high state of angst and needed help.

The first warning you’ll get when you select “DELETE” on a case list is: “MARK CURRENT RECORD FOR DELETION?” If you select “YES” it marks it for deletion but doesn’t actually delete it. Instead, it disappears from the interface and is put in the AQUA recycle bin. They had done this part.

To delete cases forever in AQUA, you must then purge in a separate function. It will ask you if you’re really sure about this. If you agree, you won’t be able to recover the cases, so it asks if you are really no-kidding-cross-your-heart-and-hope-to-die-sure? Those aren’t the exact words, but you get the idea. They had not gone this far. Even if they had, there’s still an internal backup on the server that runs by default at 1 a.m. every day. I remoted in, showed them all of this, and then recovered those cases. They were elated.

ProQA Paramount also has a strict deletion gauntlet. You must be a Paramount Administrator with the rights to delete cases. It makes you create a file to export to, just in case. You must then separately delete and purge. You’ll see warnings every step of the way that could be interpreted as: “LOOK ME DEAD IN THE EYE AND TELL ME YOU REALLY WANT TO PURGE THESE CASES.”

If you still managed to get through all of that and realized that you didn’t mean it, you can import the cases right back into the database from the file you were required to make in the very beginning. But, if you had gone to that file and deleted and removed it from your Windows recycle bin then I guess you really meant to delete those cases!

Back to the original question. Is it possible to accidentally delete data? Not really. You’d need to overcome the warnings (saying “oops” every time) and then deliberately search and destroy the backups. Deliberate is the opposite of accidental!