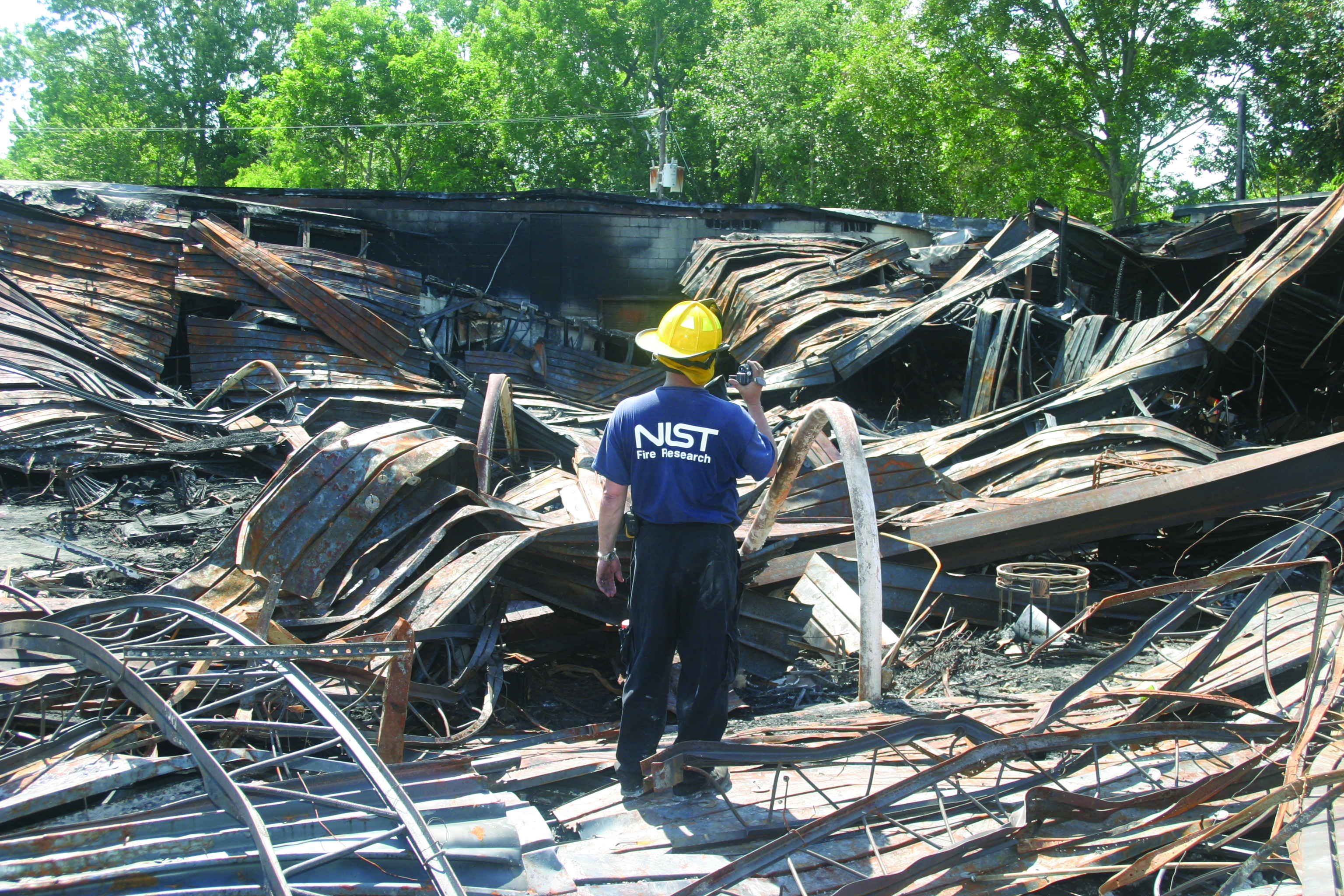 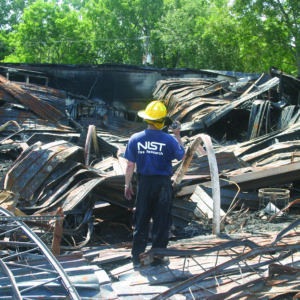 The Charleston Sofa Super Store fire in Charleston, South Carolina (USA) on June 18, 2007, was initially reported to 911 as a trash fire. Perhaps it started that way, but it didn’t stay a trash fire for long. The fire grew and grew until it engulfed the entire furniture warehouse, which contained no fire sprinklers.1 Sofa Super Store employee Johnny Ray Tyrrell was trapped inside, where he managed to call 911 almost 18 minutes after the first report of the fire.

The emergency dispatcher reassured Tyrrell that help was on the way and instructed him to stay low to the ground. Tyrrell found a hammer and used it to hit the wall as a makeshift homing beacon to help the firefighters find him. Two firefighters, Steven Beasley and Daniel Bilton, used axes to chop through wood and then metal siding on the outside of the building to create a jagged hole just big enough to pull Tyrrell through.2

The rescue was a bright spot in an otherwise bleak evening.

Not long after Tyrrell was rescued, the showroom experienced something called a flashover—an explosion due to intense heat—and consequently the roof collapsed with many firefighters still inside. Unfortunately, there was no system that was keeping track of where the individual firefighters were, so it was unclear how many were trapped.

The firefighters did have radios, but there were “16 fragmented distress messages, transmitted by lost or disoriented firefighters who couldn’t be identified, that were either missed or misunderstood due to heavy radio traffic, loud ambient noise on the fireground, and confusion. The term ‘mayday’ was only used one time and was not heard by […] anyone else at the fire scene. It wasn’t until an off-duty battalion chief who heard the mayday responded and had a face-to-face report with the fire chief that the chief recognized firefighters were in trouble inside the building.”3

It took scores of firefighters and three hours to put out the blaze, and by the time the fire was out, nine firefighters had lost their lives: Mike French, Louis Mulkey, Brad Baity, Mike Benke, Melvin Champaign, Earl Drayton, Billy Hutchinson, Mark Kelsey, and Brandon Thompson.

The Charleston Sofa Super Store fire remains one of the deadliest firefighter disasters in American history.

There are several Fire Priority Dispatch System™ (FPDS®) Protocols that may call for the use of incident command, chief among which is Protocol 69: Structure Fire. ECHO-level fire calls accounted for 0.2 percent of calls in a 2014 retrospective study conducted by the International Academies of Emergency Dispatch® (IAED™).4 Nevertheless, one should be prepared for a big structure fire call at all times. One of the ways to prepare is by learning more about the system that firefighters use to organize the scene of a large fire incident.

What is incident command?

The scene of any fire emergency—especially one large in scale—is made up of many moving parts. Incident command is the structure in which all the parts of an incident are organized.

“Incident command is a simple way of knowing where everyone is on the fireground and having a list of tasks that need to be checked off in order to call a scene safe,” Haigler said.

The term Incident Command System (ICS) refers to the systematic, on-site management of resources at the location of an emergency. The ICS was developed in Calfornia after a severe wildfire in the 1970s as a result of communication and coordination problems of multi-agencies trying to work together to put out the fire. It was adopted by the NFPA in 1987 and remains in force today. The ICS is used in countries like the United States, the United Kingdom, Canada, and Brazil and is recommended as an international standard by the United Nations. There are similar systems across the world: In New Zealand, there’s one called Coordinated Incident Management System (CIMS); in Australia, there’s one called Australasia Inter-Service Incident Management System (AIIMS); and in British Columbia (Canada), there’s one called BC Emergency Response Management System (BCERMS).

The ICS provides a standardized organizational framework during emergencies so that every agency doesn’t have to create its own from scratch and agencies working together can do so more seamlessly. This standardized framework includes incident action plans (IAPs) and an organizational structure of personnel.

IAPs formally document incident goals, operational objectives, and response strategies. They typically include plans to prevent responder injury or illness, a task assignments list (such as primary and secondary search), a communications plan, a logistics plan, and an incident map.

Organizing a fire incident can be accomplished by using either mechanical or manual methods or a mix of both. Fire agencies can use tactical worksheets, dry erase boards, or a simple pen and pad, or they can use software.

Another important thing the ICS does is provide a span of control. Span of control refers to the number of immediate individuals or groups a supervisor is over. Rather than have the incident commander keep an eye on every single person at the scene, span of control narrows it down so he or she only has to keep track of a few people, who in turn keep track of a few people, and so on and so forth until everyone is taken into account. In ICS, it is recommended that span of control is three to seven people, depending on incident type, the nature of the tasks that need to be accomplished, and safety factors.

The use of some kind of system that keeps track of personnel at a fire scene is mandated by NFPA 1500: Standard on Fire Department Occupational Safety, Health, and Wellness Program. Every accountability system should give the incident commander the firefighters’ names and/or radio ID numbers, their unit or company, their assignment, and their location on the fireground. By NFPA standards, each person on the fireground should be contacted every twenty minutes to check his status.

“There’s a right way and a wrong way of doing it,” said Haigler, referring to ICS, “And there are lots of different ways to accomplish the right way. Different people use incident command in different ways. Some use it for everything, and some only use it for structure fires. I’ve seen battalion chiefs who walk around the fireground and are actively engaged that way, and I’ve seen battalion chiefs that stay isolated so they don’t get distracted.”

The FPDS priorities in any fire incident, but especially in the event of a structure fire, are: first, life safety (of both civilians and responders); second, incident stabilization (getting the fire under control or put out completely); and third, property conservation (stopping the fire from doing too much damage, if possible).

Protocol 69 is different from other fire protocols in that it has far more ECHO- and DELTA-level Determinant Codes than low acuity ones. There are two CHARLIE Determinant Codes, as opposed to the 12 DELTA and 12 ECHO Determinant Codes. (The UKE version of the FPDS has an additional DELTA- and ECHO-level Determinant Code for a total of 13 each.) It only takes three Key Questions to determine what kind of DELTA response should be sent: “Did you see flames or smoke?”, “What type of building is involved?”, and “How many floors or stories are there?” The answers to these questions and the subsequent Determinant Code will let the firefighters know what kinds of vehicles they should respond to the fire with.

If, as in the case with Tyrrell in the Charleston fire, the caller is trapped inside the building, on fire, or otherwise in danger, you will dispatch the Determinant Code, go to DLS, provide all applicable PDIs, and provide any appropriate PAIs from Protocol B (Fire and Hazards Rescue). After you have provided the caller with as many instructions as possible to help them stay safe, return to questioning if possible. A caller who is stuck inside the building may have more information than one would think—does the caller know what type of building it is? How many floors or stories there are? Which floor the fire is on?

Getting as much information as you can from the caller then passing it on is crucial to making certain that the responders go into the dangerous situation with as much knowledge and awareness as possible. If the caller is distressed and unable to answer questions, try to strike a balance between grilling him or her and giving up on questioning completely. If you can, explain to the caller that the answers to your questions will help the responders in putting out the fire and in search and rescue efforts. In addition to helping the responders, it might also help calm the caller down to have him or her focus on a task.

The emergency dispatcher’s job is not always finished when the firefighters arrive on scene. They can also be in charge of dispatching resources such as additional engines or ladder trucks to the scene as directed by the incident commander.

“It’s important that emergency dispatchers are active listeners,” Haigler said. “They can’t just sit at the radio; they have to be actively participating at the scene by tracking resources, like the engines and where they’re going.”

Fire incidents are often dynamic. The circumstances can change in a flash, sometimes literally. A roof might collapse or an emergency call might come in from someone trapped inside who wasn’t originally accounted for in the ICS. It’s imperative that the emergency dispatcher communicates any incident information updates to responders as quickly as possible.