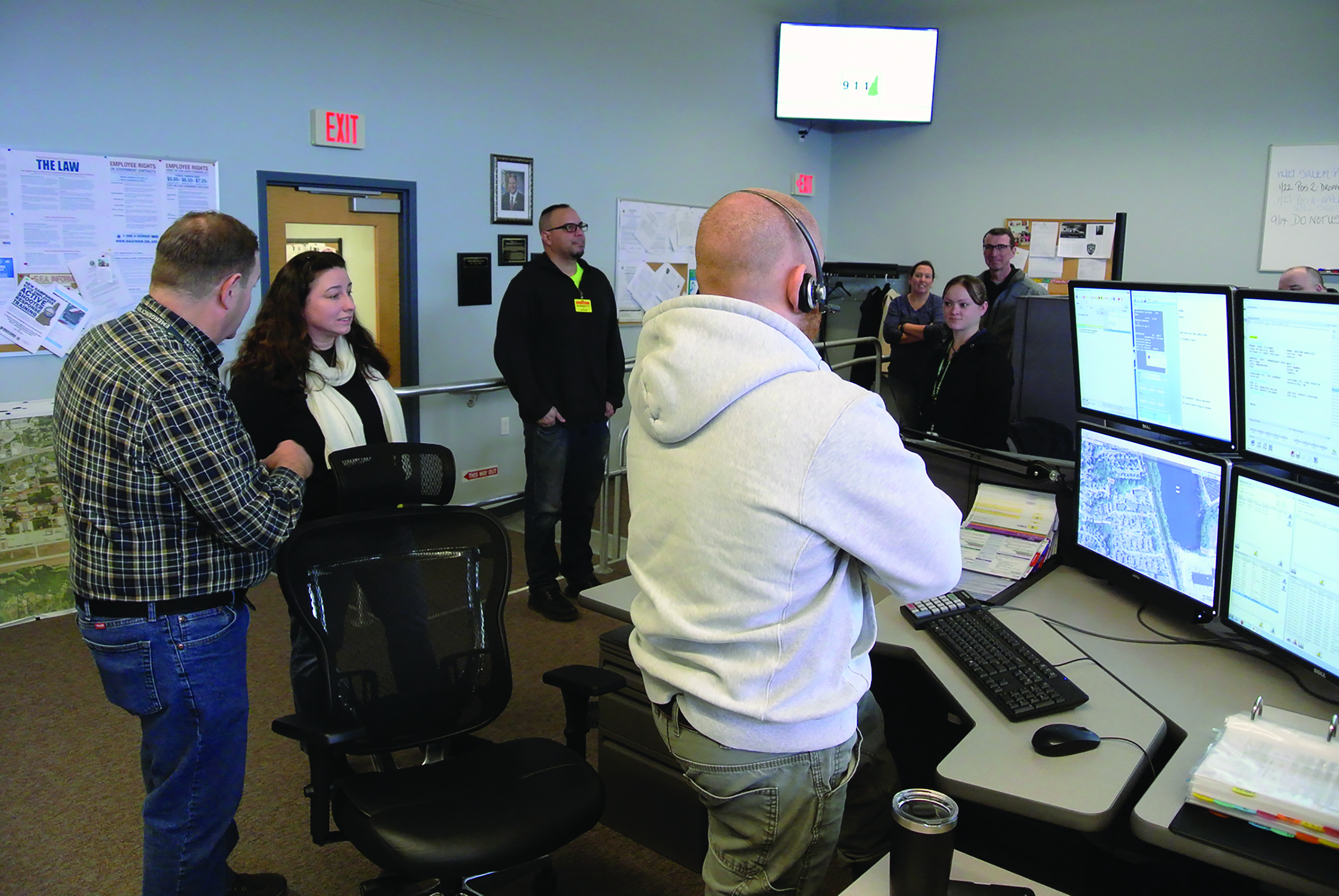 Snap Of The Fingers

For starters, the state’s two centralized communication center 26 miles apart act as one PSAP (and the emergency dispatchers answer all incoming 911 calls for the state).

Since the sites are compatible in everything they do, one ACE covers both sites and they’ve recertified four times.

They review 100 percent of their cardiac arrest calls.

The emergency dispatchers snap their fingers and everybody jumps.

You learn to roll with the tempest and prepare for whatever comes.

The BEC oversees 911. A 16-member Enhanced 911 Commission sets bureau policy. In 1995, the bureau activated medical ProQA®. The 58 Emergency Medical Dispatchers distributed between two sites Concord and Laconia answer all incoming 911 calls and sort them by type of emergency.

Although separated by a runner’s marathon, “We’re virtually in the same room,” Rivers said.

The 911 calls are answered by the EMD first in queue, regardless of site. The EMD gathers information through ProQA, and, based on the caller’s location and emergency, delegates dispatch to a secondary PSAP. There are 86 secondary PSAPs in New Hampshire, of which three are fire-only dispatch centers.1

The state known for its climbers’ paradise (the White Mountains) covers 8,968 square miles, and more than a third of the 1.3 million people live in rural areas (496,355). The sheer number of centers answering calls and dispatching responses made for inconsistent service. They were essentially independent operations. The single primary PSAP gives callers the same high-quality service¾no matter from where the call originates¾and pooled resources to fund system upgrades.

The BEC, organized in 1994, accomplishes the same goal: standardization. For example, the bureau’s Mapping Unit provides global positioning and data control to assist towns with address verification and location tracking to coordinate response. A set of recommendations includes standards for street names (such as changing duplicates), address ranges, and road classifications.

The move to a single PSAP for answering calls, and leaving only dispatch up to the local jurisdictions, was met with some resistance. Opponents voiced concern over loss of familiarity. EMDs in Concord and Laconia might not understand the needs of rural New Hampshire. Police and fire officials said the plan would limit their control and compromise quality.

Mark E. Doyle, Director, Division of Emergency Services and Communication, had his misgivings. He was with the Merrimack (New Hampshire) Police Department at the time the single center plan was announced and wasn’t totally sold on the concept until weighing the benefits against an anticipated loss the community might not even notice.

“I was apprehensive,” said Doyle, who retired from Merrimack police in 2017. “Calls would be going somewhere else, but after hearing more about it, I realized the consistency of response would be the same. Training was a real plus. It was something we had not been able to offer.”

Buy-in from public safety and the public took outreach, and that’s a job Wanda Bowers continues to this day. She’s been the BEC Informational Representative since 1994 and, in addition to fielding questions about newer technology (such as New Hampshire’s Text to 911), she often finds herself starting back at square one. People don’t understand the process. She said it’s understandable, given the state’s rural complexity and inexperience with 911 (which can be a good thing).

“They haven’t called 911 and until that happens, they don’t know what to expect,” she said. “If they have called, they want to know why all the questions. There’s the assumption we know where they are without asking.”

Service with a snap

EMS covers tens of thousands of people in at least 29 communities through the HEARTSafe program designed to advance system changes along the Chain of Survival to increase survival rates from out-of-hospital cardiac arrest. To qualify, a community must hold CPR/AED classes, put AEDs in public places, and promote CPR/AED response relative to the size of the community.

State regulations for AEDs were introduced in 1999 and enhanced during the past nearly two decades with Good Samaritan protections, training in CPR and AED use, and a registry available to responders through 911. There are more than 3,500 registered AEDs in the state; there’s at least one in every public school and in the majority of private schools.

The BEC reviews every cardiac arrest call and regularly trains all EMDs on the use of the MPDS® CPR PAIs and modifications in ProQA related to CPR, such as the Fast Track feature for hands-on CPR. This direct link was created in an effort to meet American Heart Association recommendations to reduce the time from discovery of cardiac arrest to “hands-on-chest.”

And that brings us to the snap of the fingers.

“The priority is hands-on-chest [in a suspected cardiac arrest],” Rivers said. “EMDs giving instructions snap their fingers, and someone else on the floor comes and takes over police and fire.”

“I was flabbergasted to see it happen,” he said. “I admire them. They can work so closely in a challenging environment.”

If it’s a multiple vehicle accident, the fingers don’t snap, but the EMD taking the call makes an announcement because of the incoming calls anticipated.

“It can boggle your brain what they can do as a team,” he said.

The bureau’s focus on Chain of Survival has not gone unnoticed. Two EMDs were named Dispatcher of the Year (DOY) at consecutive NAVIGATORs.

EMD Stephen Harris was named DOY at NAVIGATOR 2011 and EMD Joyce Jastrem was named DOY at NAVIGATOR 2012. Harris provided CPR instructions to the son of a patient in sudden cardiac arrest, who then relayed them to his stepfather. The patient survived and the family shared the stage with Harris at NAVIGATOR. Jastrem was recognized for her lifesaving CPR instructions during a call lasting 10 minutes and 22 seconds. One week later, the patient was home recuperating from surgery to implant a stent into a blocked artery. Jastrem is one of the first dispatchers the bureau hired and certified in 1995.

New Hampshire is known as the Granite State because of its extensive granite quarries. Granite is the official state rock of New Hampshire.

For the past 62 years, New Hampshire has held the record for the fastest wind gust ever recorded on the surface of the earth (Mount Washington, 231 miles per hour, April 12, 1934).

The cold and wind has earned the New Hampshire Mount Washington Observatory the unenviable reputation of having the world’s worst weather.