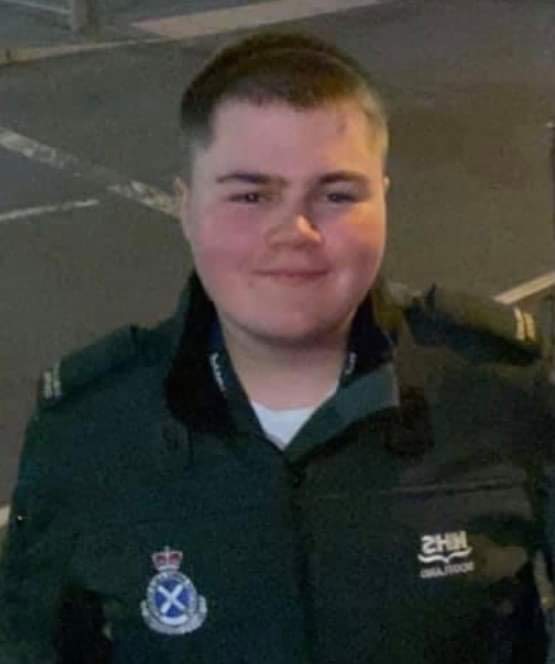 Lewis Martin can’t remember when he helped save a man’s life. He was officially recognized for the over-the-phone CPR for a patient at home and in sudden cardiac arrest, and the call and award are surely memorable to the Scottish Ambulance Service (SAS) emergency dispatch.

Lewis is not the like the most of us on planet earth. Most of us would remember the exact date and time we were instrumental in saving a life. Like others in his profession, he’s not in it for the glory or bragging rights. He accepts the oft-stressful situations as part of what he does.

“I always remind myself why I got into this job,” he said. “We help people. We’re doing something where we can make a difference in someone’s life.”

As a matter of record, James McGuire, Operational Director, SAS, Ambulance Control Centres, presented an achievement and outstanding contribution certificate to Lewis in December 2020. The award recognized Lewis’s over-the-phone CPR instructions that resulted in the return of spontaneous circulation (ROSC) for a patient in sudden cardiac arrest.

“Always a lift,” Lewis posted on the SAS Facebook page upon receiving the commendation. “I often give myself a hard time as I feel I don’t help nearly as much as the crews on the road so being awarded for saving a life through early CPR reminds me of why I do this job.”

Lewis is a dispatcher as well as an accredited calltaker—separate roles at SAS—and has been for about a year and a half, recently moving to dispatch from calltaking in December. Prior to being a SAS calltaker and now dispatcher, he was an emergency operator, picking up 999 calls and transferring them to police, fire, or EMS. Limited caller interaction prompted Lewis to take the more active position. He hasn’t been disappointed.

And he even surprised himself.

Lewis discovered his ability to stay calm under pressure and, in doing so, reassure and calm the upset and panicked caller. He works 12-hour rotating night shifts and day shifts, and, despite 999 emergency calls coming in every two or at the most three minutes, he finds the empathy to listen and show that he cares about the individual callers. He can multitask. He easily adjusts to the transition in the types of calls dependent on holidays, weather, and, of course, the pandemic. Since the pandemic and lockdown, many mental health related calls went up drastically in relation to the isolation and unknowns of the virus.

Lewis’s "new voice” brings credit and a welcome presence to the control center. In January 2021, Lewis received a SAS GREATix certificate. The National Health Service (NHS) accepts online nominations from staff observing excellent practice from another member of staff or team. The nomination is reviewed, and the message sent anonymously to the individual. The person nominating Lewis truly summarizes what he brings to emergency services:

Speaking with Lewis I was amazed at how he communicated with us. He was professional, polite, and quick on updating us with new information regarding jobs we were attending to. Being a very busy time he was calm and collected which is a great trait to have. Don’t get me wrong; all dispatchers do an excellent job, but Lewis stood out for me the last few shifts and thought he deserves praise for a job well done.

Don’t get Lewis wrong. He’s part of a team and prefers not to be singled out. He’s proud of the profession and acknowledges the support from center co-workers, field crews, and administration. He’s just as ready to help others as they are to help him during the stressful times of communications and response.

“We each know what the other is going through,” he said. “We keep check on one another. We know there’s a lot of people struggling out there and we are very privileged to bring some positive into their lives.”