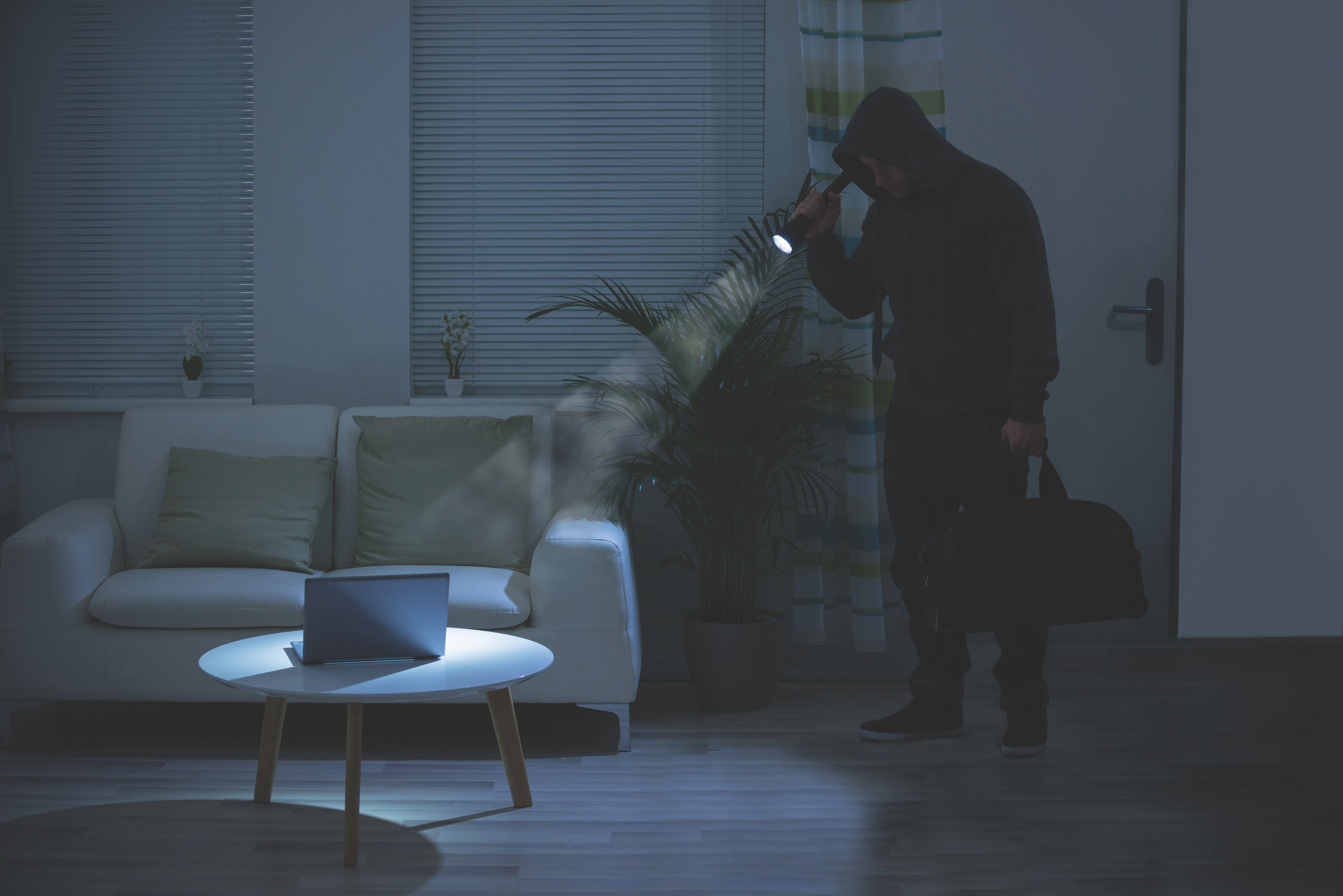 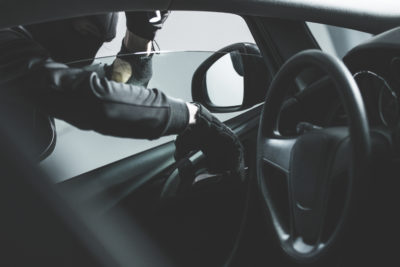 Stacy is lovin’ life. She’s returning home from a relaxing seven-day Caribbean cruise during which she devoured three “can’t-put-it-down” novels, got a great tan, and chilled with some new friends. However, that vacation euphoria came to a screeching halt when she pulled in the driveway only to discover that the garage back door had been kicked in and that her Apple laptop, her 55-inch smart TV, and some of her most valuable jewelry are nowhere to be found. Suffice it to say, Stacy’s not a happy camper. She dials 911 and blurts out to the EPD, “I’ve been robbed!”

Sound familiar? Joe Public, and sometimes even newer dispatchers, can often get confused about the criminal case terms burglary, robbery, and thievery. And in some ways, it’s no surprise. Whether it’s a line from a Hollywood heist movie or common everyday usage (as in Stacy’s scenario), these types of crimes are frequently used interchangeably or simply misused. If you find yourself in this camp, or if you just want a review, we’re here to chase away any doubts.

Our goal, and the emphasis of this CDE, is to help the EPD choose the most applicable Chief Complaint in a variety of call scenarios, review key Additional Information that will assist in Chief Complaint selection, and compare and contrast the three. We want to help you better handle these types of police calls and give callers the best emergency police dispatch service possible.

With this trio of PPDS Chief Complaints, two fall under the category of Property Crimes (Burglary and Theft), and one goes under the Crimes Against People header (Robbery). This is an important distinction because some critical calls for emergency help require quicker, more aggressive action than others. Crimes Against People typically necessitate a faster response time than Property Crimes because suspects, including suspects with weapons, may still be at the scene and pose a continued threat to the caller, bystanders, and responding officers.

Despite this, the Key Questions for all three of these Chief Complaints begin by asking the caller about weapons, the suspect’s current whereabouts, and if anyone else is in immediate danger. This ensures that whether it’s a Crime Against People or a Property Crime, the Police Protocol priorities of scene safety and caller safety always precede efforts to apprehend suspects or collect evidence.

Statistically, Protocol 130: Theft is the most commonly selected Chief Complaint of the three, according to findings from a 2013 study involving two North American emergency communication centers that was published in IAED’s Annals of Emergency Dispatch & Response. Over roughly 18-month periods, 456,711 police calls with EPDs using the PPDS were taken at two communication centers that were part of the study. Of those calls, the research showed that Protocol 130 was selected as the Chief Complaint 57,222 times; Protocol 110: Burglary came in second with 18,499 Chief Complaint selections; in third place came Protocol 126: Robbery/Carjacking, used 4,420 times.

Interestingly, the study found that Protocol 130 was the fifth-most used PPDS Chief Complaint among all calls for police service.

So, you’re much more likely to select PPDS Protocol 130 followed by Protocol 110 than you are to have calls in which you would choose Protocol 126 as the most appropriate Chief Complaint. More often than not, this is because theft cases tend to be crimes of opportunity—property is left out in the open (sometimes unattended by the owner) and frequently in a public space where suspects have unfettered access to the items. On the flip side, burglary and robbery cases usually require some degree of planning, tools to gain access to buildings, and sometimes, access to weapons.

In this section, let’s further break down the three individual protocols for a clearer understanding of what each one is and is not:

Protocol 110: Burglary (Break-and-Enter)/Home Invasion is defined in the fifth edition of the EPD Course Manual as “the report of one or more persons breaking into, unlawfully entering, or remaining unlawfully in a building with the intent to commit a crime. Examples include home invasion (breaking into or unlawfully entering a home with the intent to injure, kill, or terrorize the residents or occupants) and residential or commercial break-in.”

If someone’s backpack is taken from the corridor of a university building, or if a suspect holds up a convenience store using his hand in a hoodie pocket to simulate a pistol, neither scenario is a burglary. However, if suspects storm into an apartment with the intent of “roughing up” the occupants for not repaying a debt, Protocol 110: Burglary would be the most appropriate Chief Complaint selection.

The EPD Course Manual also defines Protocol 126: Robbery/Carjacking as “any incident involving the taking of money, personal property, or any other article of value in the possession of another from his/her person or immediate presence, which has been accomplished by means of force or fear and against her/his will.” These include theft with the threat of a weapon, theft with injuries caused, and carjacking. Protocol 126 does not cover burglary, theft without a weapon, or theft without injuries caused.

With Protocol 126, Pastula said one difference between Robbery and Protocols 110 and 130 is that the perpetrator usually has a specific, calculated target in mind, while Burglary and Theft are more likely to be crimes of opportunity.

Some important keys to remember about Protocol 126 are covered under Axioms 1 and 2. First, Axiom 1 states, “weapons are used or mentioned in most robberies.” And second, Axiom 2 explains to the calltaker that “lock(ing) doors and windows may be lifesaving.” The EPD will use PDI-b to instruct the caller to lock doors and windows.

Protocol 130: Theft (Larceny) is “any incident involving the taking of property without the owner’s consent and without the threat of force or intimidation. Common examples include pickpocketing, shoplifting, theft of a vehicle, and theft from vehicle, but not robbery or burglary,” the EPD Course Manual states. Protocol 130 is further defined in Additional Information as “the act of dishonestly taking property from another with the intent of permanently depriving the owner of it (stealing).”

To reiterate from the AEDR study, EPDs are much more likely, statistically speaking, to answer calls where Protocol 130 is the selected Chief Complaint as opposed to Protocol 110 or Protocol 126.

All signs point to Case Entry

The EPD Course Manual points out some other factors the EPD should remember when choosing a Chief Complaint. Much of it surrounds the use of Case Entry Question 4, “Okay, tell me exactly what happened.”

The manual says, “obtaining a complete description of the problem is essential for accurate classification of the incident.” Perhaps nowhere is this more crucial than during police calls in which callers may be confused, have incomplete information, or fear for their own safety.

“Listen also for background noises that might indicate caller danger or other scene safety issues,” the course manual states. “The caller’s vague statement could refer to a burglary, a robbery, or a theft. Only by getting the caller to tell you exactly what happened will you know which Chief Complaint Protocol to use for the case.”

Pastula said often the best way to get the right information or more information when the caller’s response to Key Question 4 is vague is to ask again. This approach also helps the EPD steer clear of freelancing and asking leading questions.

“Repeat, ‘Tell me exactly what happened,’” he said. “Or, if you don’t get the information you need on Key Question 4, come back with, ‘I really need to know what’s going on right now.’”

And on a final note, the EPD manual states remember “sometimes distraught callers have relatively minor problems and calm callers are reporting an extremely dangerous and volatile situation.”

“Be aware that it is impossible to judge the severity of an incident based solely on the caller’s tone, rate, and volume of speech,” the EPD manual states. “You should always focus on what is being said rather than how it is being said.”

So, some of the major takeaways from this Police CDE are:

OK, great work EPDs! Now get out there and solve “the case.”