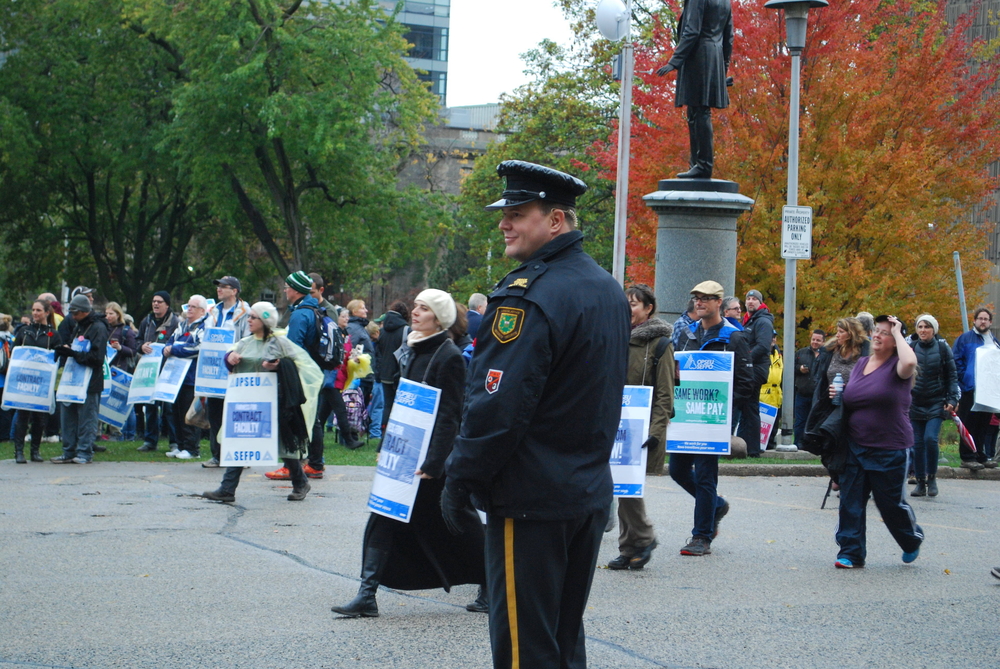 The right to assemble is acknowledged as a human right by the United Nations and is outlined in most democratic constitutions. People across the world have the right to gather together in public to express dissatisfaction with current events or to convey solidarity with their communities.

But what happens when an assembly of people turns into something else?

In November 2014 in San Diego, California (USA), a group of protestors blocked traffic on a highway for hours, causing major traffic delays.

In July 2017 in Hamburg (Germany), a group of protestors brought the entire city to a standstill as they faced off with police.

In August 2017 in Charlottesville, Virginia (USA), a man drove his car into a crowd of counter-protestors, killing 1 person and injuring 20 others.

These are just three of many examples of assemblies of people escalating into a public hazard.

This CDE discusses how you, as an Emergency Police Dispatcher (EPD), should handle calls reporting protests, vigils, riots, or any other public assembly.

A call reporting a gathering of any kind—whether violent or not—should be handled on Protocol 113: Disturbance/Nuisance and classified as a DISTURBANCE. A DISTURBANCE, as defined in the Additional Information section of the Police Priority Dispatch System™ (PPDS®), is “Any act causing disquiet, agitation, or interruption of the peace and quiet.”

Whether or not the DISTURBANCE will be classified as physical or verbal depends on what’s being reported. It’s fairly straightforward. A group of people holding signs and chanting—or something akin to that—is an example of a verbal DISTURBANCE, while a group of people exchanging blows with others is an example of a physical one. People blocking a public sidewalk would be classified as verbal because even though they are physically impeding pedestrians, they are not being violent.

The issue of protestors being on private property is handled on Protocol 133: Trespassing/Unwanted.

According to Kelly Sparks, Deputy Director of Peace Officer Standards and Training for the state of Utah, most protest organizers will get permits to demonstrate in public areas, such as in parks or on sidewalks. If that is the case, you can do a computer check to see if a protest has been scheduled at the time you receive a call reporting one. There will usually be officers on civil standby if a protest has been scheduled, which means that officers will be in the area, allowing people to exercise their rights but making sure that things don’t get out of hand. In some situations, there will even be a command center at the scene.

However, even if a protest has been scheduled, pay close attention to what the caller is telling you. Are they reporting that the protestors have begun exchanging blows with counter-protestors, the police, or even each other? Are they reporting protestors in a different place than is outlined on the permit? You shouldn’t assume that because a caller is reporting a protest, it is automatically a protest you and the police are already aware of. Even if it becomes clear that they are reporting an already-licensed protest, they could still have valuable information and insights that no one else has reported.

The first Key Question on the DISTURBANCE sub-Chief Complaint is, “Were weapons involved or mentioned?” This is because PPDS incident priority No. 1 is officer/deputy safety, closely followed by caller safety. The presence of weapons greatly increases the opportunities for violence, and officers need to be aware of the situation they’re going into.

In the earlier versions of the PPDS, the caller’s safety was prioritized over that of the police officer. However, Chris Knight, a member of the IAED™ Police Council of Standards, said the Police Council of Standards found that prioritizing caller safety was less effective in containing the situation overall than prioritizing officer safety. The officers cannot help the caller if they themselves have been injured. Keeping officers safe is a large part of doing everything EPDs can to keep the caller—and the public at large—safe.

The second Key Question is “How many people are involved?” This is to give the police a general idea of how many officers they’ll want to send out. A gathering of three or four people will not warrant the same response as a gathering of five hundred. However, the number of people in the gathering will not change the Determinant Code.

One of the many changes made between version 5 and version 6 of the PPDS is the shift from determining whether a disturbance is caused by a large group or an individual/small group, to only determining whether the disturbance is physical or verbal. Version 5 had the emergency dispatcher differentiate between a large group (generally more than five people) causing a physical or verbal disturbance and a small group or an individual causing a physical or verbal disturbance. This separation has been done away with in version 6 because, according to Knight, “user agencies [reported] that they did not respond any differently if the group was large or small.”

While getting a description of every person in the crowd might be helpful, it’s not practical. Knight advised EPDs to be sure to get descriptions of people holding weapons and of the weapons themselves. If there are multiple people with a variety of weapons, the EPD should get as much information as possible, especially if more than one person calls it in.

Sparks says another thing to think about is that the size of the gathering is a public safety issue, especially in the area of traffic control.

As with the protestors in San Diego and in countless other places and instances around the world, sometimes a group of people will express their views by blocking traffic. It’s an inconvenience at best and a traffic hazard at worst, but no matter the outcome, it is likely that someone will call 911 to report it.

Both Sparks and Knight agree that even if protestors are blocking traffic, the call should be handled on Protocol 113, rather than Protocol 132: Traffic Violation/Complaint/Hazard. It goes back to Chief Complaint Selection Rule 1: “When multiple crimes are reported, choose the protocol that best addresses the primary event.” In this case, the primary event is the protest. The context surrounding the traffic hazard is important. The police will handle protestors blocking traffic differently than they will an overturned semi-truck blocking traffic.

An important thing to remember when handling calls regarding protestors blocking traffic or any other traffic-related call is that the caller might not be able to give you an exact address. They might only be able to give you a crossroads or an approximate area. Don’t get hung up on getting an exact location. Instead, find out as much as you can. Are they northbound or southbound? Can they see any landmarks? Can they actually see the protestors on the road or are they going on what other people are saying?

A step beyond assembly

What about the case of the man who drove his car into a crowd of counter-protestors in Charlottesville? Would that 911 call still be handled on Protocol 113? No. In regard to that incident, Knight said, “It moves beyond [Protocol] 113 and becomes [Protocol] 106 for an assault with a weapon. It’s becoming increasingly common for terrorists to commit violent acts with cars as their weapon. The answer to the question ‘What type [of weapon]?’ would be a description of the car.” The EPD should shunt from Protocol 113 to Protocol 106: Assault/Sexual Assault while still informing the police that it happened in a protest or riot setting.

This is also true in instances when a public gathering turns into looting, like a protest in Charlotte, North Carolina (USA), in 2016 in which protestors started by blocking traffic on the interstate and then began breaking into semi-trucks and taking goods out. Some of the looters were taking the goods; others, however, were merely throwing the goods onto the road. 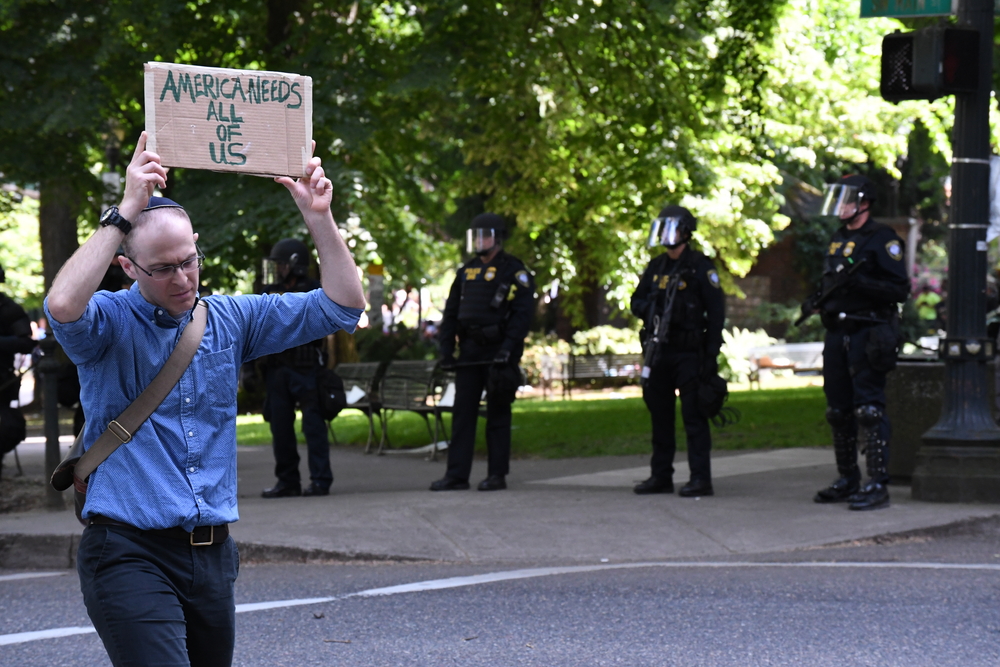 As mentioned before, you, the EPD, should be sure to give the police as much information as you can about the situation surrounding the primary event. Let them know that the crime being reported has stemmed from a public gathering of some sort. It’s likely that there will already be officers on the scene.

In the United States in 2016, demonstrations were the fourth leading circumstance of fatal officer shootings (following domestic disturbance, suspicious persons, and attempted arrest).1 Five officers were killed in the ambush attacks in Dallas, Texas (USA), in July as a sniper opened fire on officers who were overseeing a peaceful march that was taking place. That would not qualify as a physical DISTURBANCE, even though the circumstance surrounding the shooting was a protest.

Should you get a call like that, you should immediately dispatch the Determinant Code 136-E-9 and open Protocol 136: Active Assailant (Shooter) after giving Case Entry PDI-b: “I’m sending help to you now. Stay on the line.”

Time to call a SWAT team?

There’s a common misunderstanding of the primary roles between a Special Weapons and Tactics (SWAT) and Riot or Crowd Control Team, and their deployment during incidents of civil unrest, such as the protests in Ferguson, Missouri (USA), in 2015. According to Shawn Messinger, a former SWAT team Commander, usually a riot or crowd control team will be utilized during these events whenever possible. The differences between the groups come from the varied training and tools a SWAT team receives as opposed to those a Riot Control Team receives, though there are some agencies that have team members who are cross-trained to do both SWAT and riot control work.

SWAT’s training and tools are focused more on tactical intervention—like finding an active assailant or making a tactical entry into a building—rather than on controlling large crowds. The equipment and training utilized by Riot Control Teams generally have less potential to be lethal than the tools used by SWAT teams. Some of the tools are the same, but the trainings’ overall focus is different.

Although SWAT teams aren’t generally called to handle protests, there are exceptions to the rule. Once a protest or a riot reaches a certain point, a SWAT team will often be called in to handle it. In the Ferguson situation, for instance, SWAT was utilized to help contain the incident and attempt to protect local businesses.

SWAT will not be called in to handle most protests, especially not ones that are classified as a verbal DISTURBANCE. It’s far more likely that an EPD will be involved by taking the call in a communication center. So whether it’s protestors blocking traffic or looting trucks on the freeway, may your next protest-related call go smoothly.