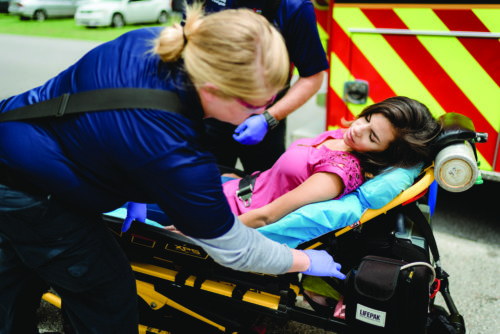 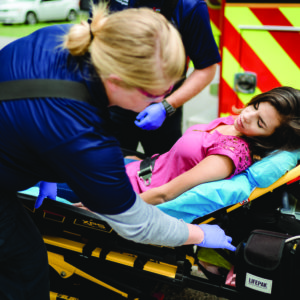 Consider these two scenarios.A woman dies at home of sudden cardiac arrest (SCA). She is 89 and has been under hospice care for the past several weeks. The woman’s end-of-life plans, including DNR (Do Not Resuscitate) orders, are in place. The hospice nurse, who is familiar with the patient and family, knows whom to call and what to do. She also consoles the woman’s daughter, who, despite expecting her mother’s death from a terminal illness (not from SCA), admits the difficulty of making decisions at the time of her death. With the nurse taking over the more-or-less administrative tasks of her mother’s death, the daughter said she was better able to cope with the immediate loss.

Compare that with the experience of a spouse, whose 63-year-old husband dies of SCA and neither wife nor her husband had discussed their preferences for end-of-life care (advance directives). She calls 911 at the time of his collapse, although she soon realizes the call is too late. The EMD sends an ambulance, and EMTs arriving on scene are legally bound to start resuscitation because there is no DNR order, despite the wife’s objections. The EMS system in their area does not allow non-physicians to pronounce death and stop all resuscitative efforts. Paramedics transport his body to the hospital by ambulance where a doctor later declares her husband dead. The wife said the experience (continuing resuscitation and transporting his body to the hospital) made his death more difficult on the family.

Some EMS systems are authorized to terminate resuscitation out of hospital. In these systems, making a distinction between workable cardiac arrest patients and patients who are unquestionably (and irreversibly) dead is an important function of the EMD. In that respect, communication centers must be certain about local EMS laws regarding death pronouncement and certification and how to take care of the body.

Paramedic responses to terminally ill patients in cardiac arrest can create ethical problems for EMS personnel, since attempting to resuscitate may not always be what family members and loved ones desire. For most states in the U.S. EMS responders are required to begin resuscitation efforts if the patient or family does not have a current DNR (a physician’s order directing medical personnel to not attempt to revive a patient using CPR or other extraordinary means)at the scene when EMS personnel arrive and the patient has a chance of surviving. Any questionable end-of-life circumstances without a DNR must be clarified later, in the hospital after EMS completes its turnover to hospital staff. Even when a DNR order exists and is presented to EMS personnel at the scene, different policies apply in different states and regions. In areas where EMS policy prohibits death certification in the field, EMS responders “are expected to provide BLS and ACLS as part of their professional duty to respond.”1 There are exceptions:

A physician’s involvement is not universal. For example, in Maryland, EMS providers can halt resuscitation efforts and declare the patient’s death on scene without a medical consult if unable to resuscitate a patient in cardiac arrest after 15 minutes of CPR, according to a protocol issued by the Maryland Institute for Emergency Medical Services Systems (MIEMSS).3

There is a difference.

The heart’s electrical system is affected when SCA occurs. During SCA, the heart stops beating and no blood is pumped to the rest of the body. Survival depends upon turning the electricity back on, typically through electric shock, and in many cases removing the clot from a cardiac artery when the arrest is caused by a heart attack.

An estimated 17.7 million people died from cardiovascular diseases in 2015, representing 31 percent of all global deaths.5 About 40 to 50 percent of all cardiovascular deaths are SCAs, and about 80 percent of these are caused by ventricular tachyarrhythmias,6 which include both ventricular fibrillation (VF or Vfib) and ventricular tachycardia (VT). These deadly heart rhythms are most often caused by a heart attack, typically known as a myocardial infarction (MI). An MI is caused by a blockage in a cardiac artery, interrupting blood flow and causing an area of the heart muscle to die, therefore affecting the heart rhythm. Drug therapy or surgery can restore blood flow if done in time. While heart attacks (MI) are the leading cause of SCA, other conditions can cause the heart to stop suddenly, such as a strong electric shock or a sharp, sudden blow to the center of the chest. Asphyxia, or lack of oxygen in the blood and brain, can also cause the heart to stop over a period of minutes, but asphyxia is generally not considered an SCA, since the physiology is different and typically does not cause ventricular fibrillation. 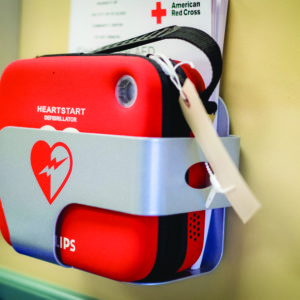 Medical Priority Dispatch System™ (MPDS®) Protocol 9:—when there is potential to restore a normal heart rhythm—and the patient has not reached the point of irreversible (biological) death. The term “workable” identifies the patient’s condition as potentially responsive to lifesaving procedures such as CPR, the use of an AED, and/or cardiac medications such as epinephrine, vasopressin, and amiodarone.

An American Heart Association (AHA) fact sheet states CPR and early defibrillation with an AED can more than double the chance of survival.7 A hands-on-chest Fast Track was added in MPDS v13.0 and is intended for patients who are initially and obviously described as being in cardiac arrest in the Case Entry sequence.

What the caller knows

MPDS Protocol 9 contains several Determinant Codes for cases of unquestionable death—where the patient is determined to be biologically dead: 9-B-1 “OBVIOUS DEATH unquestionable (a through h)” and 9-Ω-1 “EXPECTED DEATH unquestionable (x through z).” A DELTA priority-level Determinant Code 9-D-2 “OBVIOUS or EXPECTED DEATH questionable (a through h; x through z)” is assigned when the case appears to be a biological death, but the caller is uncertain about the patient being “beyond any help” or is uncertain about the condition of irreversible death.

Because of the caller’s uncertainty, the DELTA-level response is necessary as a safeguard to ensure a rapid response with the adequate EMS resources to handle a patient that will likely need resuscitation attempted. The EMD must begin CPR Pre-Arrival Instructions for these cases.

MPDS Determinant Codes for both OBVIOUS DEATH (9-B-1) and EXPECTED DEATH (9-Ω-1) exist for patients who are clearly and irreversibly dead or have a terminal illness accompanied by written DNR legal orders to forgo lifesaving measures. Medical Accredited Centers of Excellence interested in reducing over-response can use the OBVIOUS and EXPECTED DEATH Determinant Codes to optimize resource allocation in cases of irreversible death.

The OBVIOUS DEATH protocol is very specific in providing identifiers that describe nonviable, “dead patients.” For example, CPR instructions will not be successful in case of a decapitation or with a decomposing corpse.

If the patient’s condition matches the local definition for OBVIOUS DEATH, the emergency dispatcher should ask Key Question 1a, “Do you think s/he is beyond any help (resuscitation/CPR)?” If the caller expresses any uncertainty, the EMD provides PDI-c, “I’m sending the paramedics (ambulance) to help you now. Stay on the line and I’ll tell you exactly what to do next,” and proceeds to the DLS Links to provide PAIs for life-sustaining efforts.

Key Question 1b, “Are you certain we should not try to resuscitate her/him?” addresses EXPECTED DEATH situations, which may include a patient who has suffered from a terminal illness or who has desired to establish a DNR order. If the caller is certain that the patient’s wishes were to not be resuscitated (as indicated with a DNR order), the EMD may send 9-Ω-1 only if the DNR is unquestionable and the OMEGA is already defined and authorized by Local Medical Control. However, as Rule 1 directs, “if the caller believes the DNR should be ignored or is uncertain if the DNR is valid or in place, an appropriate response and resuscitation attempt should be made.”

These final Key Questions provide the EMD with confirmation that the OBVIOUS DEATH and EXPECTED DEATH determinations are correct.

After completing Key Questions, the EMD initiates an appropriate response and then provides PDIs that best address the situation. For either OBVIOUS DEATH or EXPECTED DEATH situations, the instructions similarly reassure the caller “I’m sending someone to assist you” (the EMD will notify proper authorities) and ask whether the EMD can do anything else for them.

In the case of OBVIOUS DEATH, the EMD also instructs the caller to leave everything as he or she found it, which preserves evidence that may be reviewed in the event of an unexpected death.

Prior to any use of the definition or Determinant Codes associated with “OBVIOUS DEATH,” a local medical director/physician must authorize specific conditions that are widely regarded as clearly indicative that the patient has entered a hopeless, nonviable state of being, and the certified EMD must be trained and well aware of the locally defined terms. As stated in the definition of OBVIOUS DEATH:

Local Medical Control must define and authorize any of the patient conditions below before this determinant can be used. Situations should be unquestionable and may include:

a – Cold and stiff in a warm environment

Local Medical Control may also add situations of unquestionable or expected death in addition to those already listed in the protocol.

The study noted in the introduction examines the MPDS Determinant Codes for OBVIOUS DEATH unquestionable and EXPECTED DEATH unquestionable, along with their associated suffixes, and compares those codes to the responding EMS crews’ determination of the patient’s condition at the scene.

Study results showed that overall, unquestionable death in the priority response classifications of BRAVO- and OMEGA-level codes were coded correctly by the EMD in 98.5 percent of all cases, as indicated by the paramedics’ decision not to transport upon arrival. The reasons for transport included local protocols, inability to locate a DNR, and paramedic intuition.

According to the study’s conclusion, determining the ability of these codes to correctly predict the findings of the responding EMS crews will help system administrators and medical control physicians make better decisions about the use of ALS and rapid response resources to cases recorded by the EMD as unquestionable death.

Editor’s Note: Much of this CDE is based on the study “Emergency Medical Dispatchers’ Ability to Determine Obvious or Expected Death Outcomes Using a Medical Priority Dispatch Protocol,” published in the AEDR Journal (2015). It is available in its entirety at aedrjournal.org/emergency-medical-dispatchers-ability-to-determine-obvious-or-expected-death-outcomes-using-a-medical-priority-dispatch-protocol/.