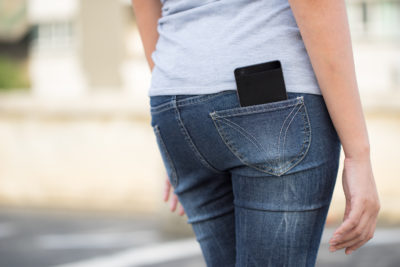 It’s embarrassing, but we’ve all done it before: made an accidental phone call to an unintended recipient.

Usually, this mishap occurs when our phone is in our back pocket and we sit down. Next thing we know, we’ve inadvertently dialed up one of our contacts or perhaps even a stranger. Sometimes we’re even unaware the connection has been made, and someone on the other end is saying “hello, hello,” with no response.

This is a phenomenon known as “butt dialing,” or “pocket dialing.”

As annoying or frustrating as these calls can be, imagine being a 911 operator and receiving these accidental calls. Indeed, pocket dialing is a significant issue in emergency response.

There is a difference between pocket dials and hang-ups, though a pocket dial could double as a hang-up. A call to 911 with a deliberate hang-up is a serious offense that could lead to a citation. A person might do this as a prank or simply upon realizing they have mistakenly dialed 911. Panicking about what they have done, the person might hang up rather than speak to a calltaker.

In either case, anytime a call comes into a communication center and the caller hangs up, the calltaker is required to call back to verify whether there was a legitimate emergency. If the caller does not answer the callback, the calltaker will make another attempt.

It’s easy to see how calling back one or two times wastes valuable time and resources that could be spent handling actual emergencies. The time spent receiving a hang-up call and calling back, for example, could be put to use helping a heart attack victim or someone reporting a home invasion.

By nature, a pocket dial is not intentional; the unknowing caller is not meaning any mischief or harm. Sometimes the person won’t even notice he or she has pocket dialed 911. If the person has noticed, in many cases the offender quickly hangs up without saying anything to the calltaker. Nevertheless, it hinders emergency response and jeopardizes the safety of others whose own responses may be delayed.

Thankfully, the majority of people are apologetic and remorseful about the mistake.

“Most people are pretty good about talking to us and apologizing for the call,” said Kerry O’Connell, Gallatin County (Mont.) 911 Communications Director. “They are cooperative, give us their location, and answer our questions, which are then relayed to law enforcement. At times, they immediately hang up on callback or are generally uncooperative, but once again, this is information then relayed to law enforcement.”

According to a study conducted by the Pew Research Center at the beginning of 20141, more than 90 percent of American adults own a cellphone. More specifically, 64 percent of U.S. adults have a smartphone.

What does this mean? Among many other things, it means the potential of pocket dials reaching 911 is increasingly high and rising as cellphones become more prevalent. It’s become a common issue in communication centers everywhere.

Take, for example, Valley Emergency Communication Center (VECC) in West Valley City, Utah.2 Each day, about 2,000 calls come into the center; annually, more than 1 million calls are made to VECC. But here’s the real eye-opening statistic: Nearly 29 percent of these calls are pocket dials. This means close to 600 calls each day are of the unintentional variety. But they’re calls nonetheless, and VECC dispatchers are obligated to take them seriously.

That’s a lot of time following up on what amounts to meaningless phone calls made from people sitting on their phones.

Other communication centers report similar findings. In Montana, O’Connell’s Gallatin County 911 Communications serves a much less-populated area than does VECC. Still, the center gets its share of pocket dials.3 The center received 30,000 calls in 2014, nearly 5,000 of which were the result of accidental pocket dials.

O’Connell said because calltakers have no idea whether a pocket dial hang-up is an actual emergency, police are usually sent to make sure there isn’t a real need. After all, it’s not uncommon for a person in peril to make a 911 call only to hang up or not speak because remaining on the line, in their minds, is too risky or dangerous.

“It drains time and resources, because dispatchers spend time calling back, and law enforcement is responding to events that are not emergencies,” O’Connell said. “This is an extremely inefficient use of resources and could cause a delay of an actual emergency.”

Trying to determine whether the pocket dial was a legitimate emergency is not easy. This can be complicated when dispatchers don’t have the ability to call back the offending cellphone.

“I’m sure all centers have stories about serious calls that started out as 911 hang-ups,” O’Connell said. “We can cite the same examples. Another frustration is when they come in during the busiest times—when multiple calls are already ongoing. Probably the worst ones are the uninitiated cellphone calls that we are unable to call back and have no way of knowing if it was an emergency or not.”

In October 2015, Google researchers Diara Dankert, James Driscoll, and Nancy Torres conducted a monthlong study. The study focused on the trend of the increased 911 call volume in San Francisco, Calif. Though the study included elements of many different factors related to these increases, one component examined accidental calls made to the San Francisco Department of Emergency Management (DEM), which handles 911 calls for the city.4

The Google team found that between 2012 and 2014, 29 percent of all calls made to DEM were classified as accidental. More specifically, the percentage of accidental calls in 2014 alone was 34 percent.

Because these accidental calls could have either been wireless or landline, it’s impossible to know from these numbers how many were pocket dials and how many were instances of people accidentally physically dialing 911 from their home phone.

However, to help give perspective on the pocket-dialing problem, the Google study took data from DEM and examined the regularity of accidental calls from wireless phones.5 The study first showed that out of a 197-call sample size, 30 percent were accidental. Of those 30 percent, dispatchers called back 88 percent of the callers. The average duration of the callback process was one minute, 14 seconds. Another sample size was a look at 79 calls. Of these, 37 percent were accidental calls with a 43-second average callback duration.

The study confirmed what managers from other agencies have said: Accidental and/or pocket dials from cellphones can be a time-consuming process and can hamper valuable resources.6 In fact, the study points out that 39 percent of surveyed dispatchers said these accidental calls from cellphones are the largest “pain point” they face in their work.

O’Connell said her center has similar numbers to those in the San Francisco study. Fortunately, she believes the number of pocket dials and hang-ups should level off.

“I would say at this point [hang-up numbers] are pretty steady but it was increasing as the number of cellphones increased,” she said. “I think at this point the only reason it would increase would be with an increase in population. About everyone who is going to get a cellphone already has one.”

There’s an app for that

Seems like there is a smartphone or tablet app for just about everything. There are even some designed to help prevent pocket dials and other accidental calls. One of these is Call Confirm, an Android-based app that when installed requires your confirmation before the call can be sent. If you’d like, you have the option of listing “exceptions” to the confirmation. Doing this allows you to put in any numbers that you’d like, permitting you to bypass the confirmation step when calling.

For iPhone users, there’s the app AskToCall, which works similarly to its Android counterpart. When a number is a dialed, a dialogue box appears on your phone that reads “Do you want to call?” Callers then have the option to press “call” or “cancel.”

Of course, neither of these apps is a foolproof solution to pocket dialing. It’s conceivable that a phone could be pocket dialed and then the confirmation or “Do you want to call?” buttons could also be pocket-pressed. However, these apps decrease the likelihood of pocket dials occurring.

Communication center managers, dispatchers, and emergency responders urge the public to be aware of ways to minimize the likelihood of making pocket dials and other accidental calls. There are a few simple steps anyone can take that will save communication center personnel time and headaches. And, as a result, these actions just might help save someone whose response might otherwise be delayed due to these time-wasting calls.

First, no matter what, do not hang up. If you’ve sat on your phone or someone pocket dialed 911, and you happen to realize you’ve made the error, stay on the line. Don’t be ashamed or nervous. Remember, in this case, the dispatcher will call you back anyway. Instead, stay on the phone, admit your call was made inadvertently, and assure the dispatcher that everything is OK.7

If you are one of the 90 percent of U.S. adults who own a cellphone—or one of the 64 percent who own smartphones—become familiar with its features. Locate your emergency icon and situate it on your phone someplace where you know you won’t easily press it by accident.

Another way to help ensure you won’t accidentally dial 911 is by using a passcode to lock your screen. You can set most phones to do this automatically after a specific number of minutes pass and the phone is not in use.8

“Because these calls are about 100 percent cellphone calls, we advise people to keep their screens locked when not in use,” O’Connell said. “We also advise them to stay on the line if they call accidentally because we’re going to have to call them back anyway. The more information they can give us on their initial call, the less time it will take for follow-up.”

The Federal Communications Commission recommends turning off the 911 autodial feature.

Also, always know where your phone is. Keep track of it, especially if you’ve placed it in your back pocket where pocket dials frequently originate.