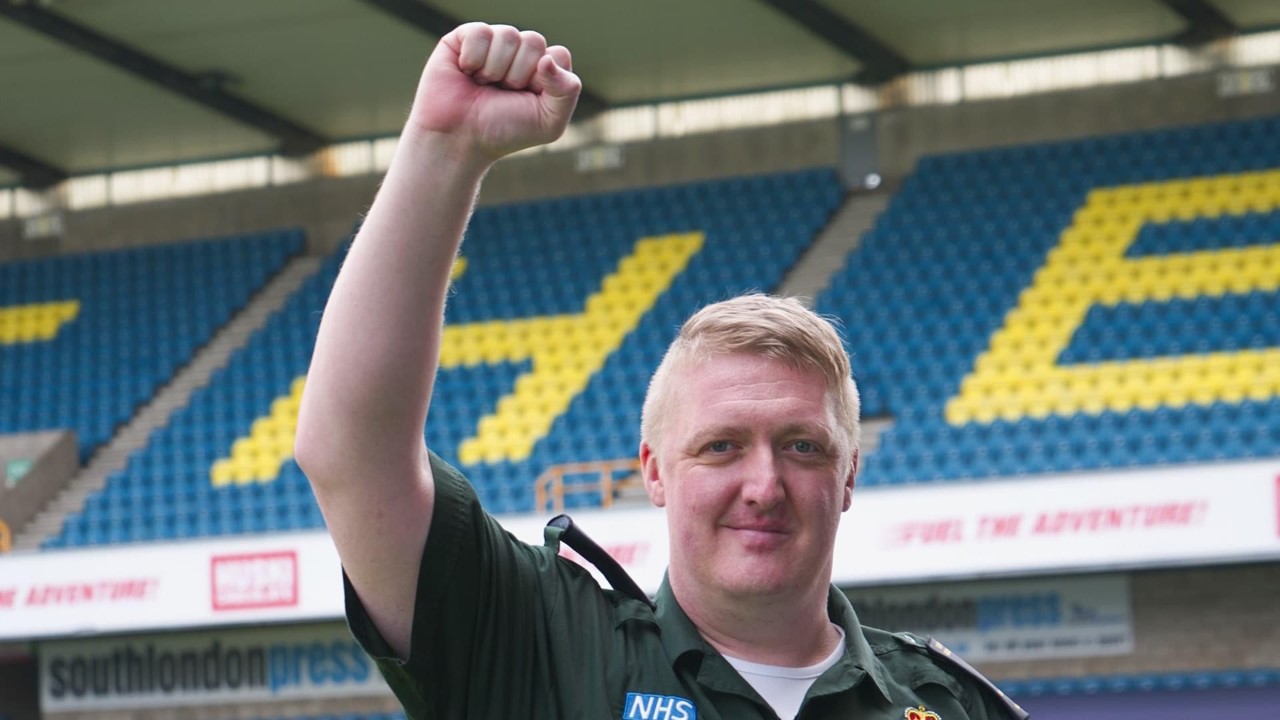 One Step At A Time

Sean Ash is the kind of guy we wish we could all be when bad things happen. He rises to a challenge. Takes the bull by the horns. And clichés aside, Ash has the indomitable spirit of someone who deals head on with a difficult situation. 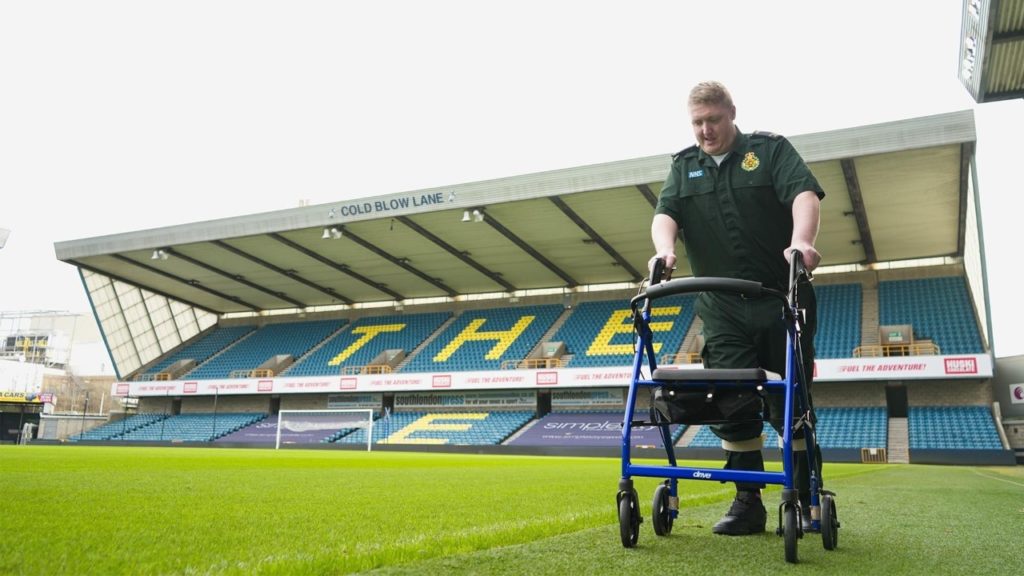 And we’re not just talking COVID here. We’re talking about Ash’s walking to benefit the U.K. National Health Service (NHS). As of Feb. 3, he had raised 64,236 pounds (87,667 American dollars) in donations in an extraordinary test of endurance. Walking no longer comes naturally to the Brit.

Learn more about Sean's fundraising campaign (and contribute) at https://www.justgiving.com/fundraising/goingthextramile?fbclid=IwAR2CKlJ8EOK-7DWjaksVnibtC0xTEzogozKuV6wdxYedfq971HM6nwHKUI8

Six months ago, Ash had a choice: sink or shine.

Ash is 39 years old. He is a calltaker for the London Ambulance Service (LAS), NHS Trust. He was hired on in April 2020 at a time COVID-19 mortality and morbidity were surging. On April 9, the U.K. recorded its highest daily death toll at 938 deaths in 24 hours and three days later, the number of confirmed deaths worldwide passed 100,000.1

The pandemic reinforced his resolve. He wanted to help people and a 999 call earlier that year convinced him that emergency communications might fit the aspiration. Ash had tried to phone a friend who had recently suffered a traumatic brain injury in an assault. No answer. Ash went to the home. Knocked on the door. No answer. He went inside. His friend lay deceased in the hallway, presumably from a fall.

“The calltaker was so helpful, so compassionate, that I applied at the London Ambulance Service,” said Ash, a former public school tutor. “I’ll never forget that call and thinking ‘this is what I want to do.’”

Emergency communications was also better suited in relieving his chronic back ache. Less time spent on his feet. Walking and standing aggravated the pain from a slipped L3 spinal disc.

The pandemic condensed training and within three weeks, he was a certified EMD working in the control room. He had found his niche. Although an introvert by nature, emergency communications brought out the ability to respond quickly and with self-confidence.

Jump ahead four months to August 15, 2020. The unexpected happened. The slipped L3 spinal disk ruptured. The rupture severely compressed the nerves at the end of his spinal cord known as the cauda equina. He was taken to King’s College Hospital (Denmark Hill, Camberwell in the London Borough of Lambeth) where he underwent several surgeries to save his life and prevent further paralysis.

Doctors diagnosed Ash with Cauda Equina Syndrome (CES). The prognosis was bleak. The severity disrupted and paralyzed motor and sensory function to the lower extremities and bladder. Ash was paralyzed in his feet, legs, and saddle area. He could not walk. He could not urinate. He could not lift himself out of bed.

“All the functions were gone,” he said. “All the muscles that hold you up stopped working.”

Therapists and doctors said he would never regain any function. His paralysis was permanent.

Ash plunged into depression and contemplated taking his life.

“I worried about going home,” he said. “I would lose the safety net. How would this affect my family? What would people think?”

One week prior to his hospital release, Ash decided to give it a go. Giving up was not an option. He pulled himself up on a Zimmer frame and took two steps. He was exhausted and exhilarated.

In January, he found his opportunity to make something good out of a difficult situation. He established the Xtra Mile fundraiser in honor of NHS staff that “all go the extra mile for us,”2 and in recognition of the stress and challenges NHS staff endures for others. Although he had not walked more than 10 meters (32 feet) since leaving the hospital, he set a goal of walking half miles over two periods. 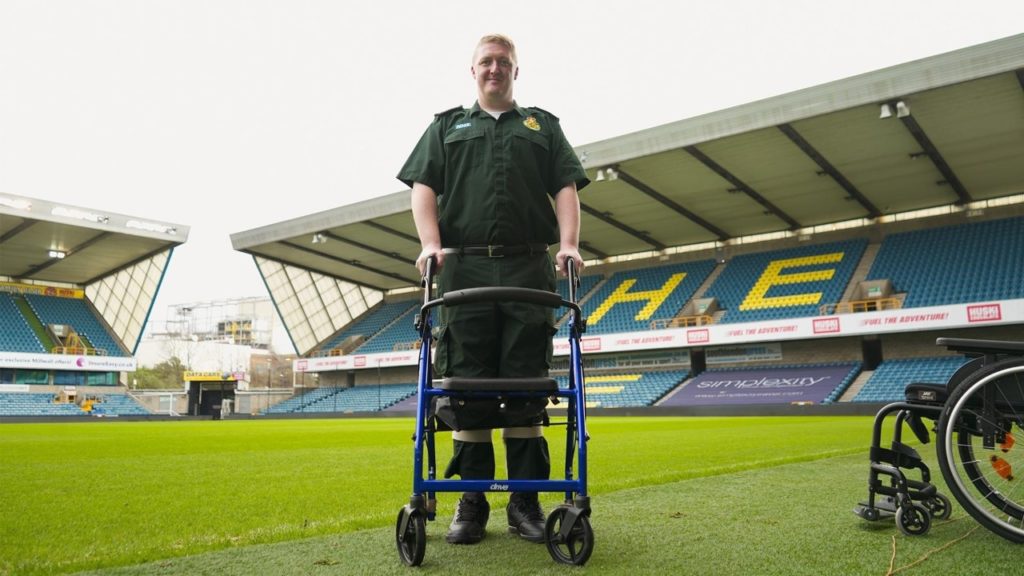 Sean readies himself for the second half-mile walk on Feb. 2. His two daughters accompany their dad on training walks in their neighborhood of Welling, pushing his wheelchair from behind. (photo courtesy Sean Ash)

On Jan. 12, he walked the first half mile circling his local area in Welling using his Zimmer frame. His daughters followed pushing their dad’s wheelchair for safety reasons. He walked the same route to complete the second half mile. He went beyond the original mile goal Feb. 2 in a lap around the Millwall Football Club “Den” pitch. Ash in an avid Millwall fan.

In honor of Ash’s efforts, Bexley Borough Mayor James Hunt presented Ash with a certificate of commendation in January. Ash lives in Welling, within the London Borough.

The effort is physically and mentally all-encompassing.

“I have to think my whole way through,” he said. “Walking no longer comes naturally. It comes with pain. Recovery [from the effort] is slow.”

Ash returned to work eight-hour shifts in January. He credits his co-workers for helping him through the rough patches while he was in the hospital. They sent him a care package of snacks he had enjoyed at the console and a group photo. They hadn’t forgotten him. They welcomed his return and applauded his resilience.

Ash refuses to give up and takes one day at a time.

The walk on Feb. 2 is pushing Ash closer to his goal of raising 100,000 pounds (136,678 American dollars). The money goes into the NHS charitable fund in support of staff and the volunteer responder program.

A woman walking her dog on the grounds of the Ambulance Service of New South Wales (NSW), Australia, headquarters drew the attention of staff when her 15-year-old dog, Lucky, fell more than five meters (16.4 feet) down a drain hole, according to the agency’s Facebook page.