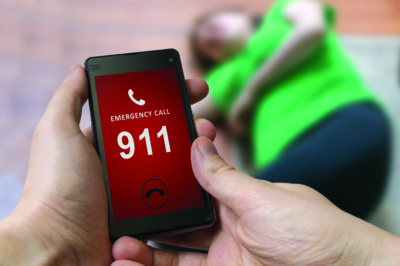 Don’t take that the wrong way. I’m sure you understand what I mean. After all, no one wants to be in a situation where they need to call 911, but anyone is sure glad you’re there when emergencies arise.

I’ve called 911 three times in my life. The first time occurred when I was about 6. My older brother and I were messing around on the phone. We had just gotten done dialing a random number (which happened to ring some guy in Norway) when we figured it would be a great idea to dial that three-digit number we’d heard about so much in school. Apparently we had a lot of leisure time on our hands that day. We dialed the number; someone answered. My reaction: I quickly hung up.

Naturally, a dispatcher called right back. Problem was, my mom answered the phone. Needless to say, I wasn’t allowed to touch the phone for a year. Plus, I was deprived of my favorite cartoons for a whole week.

The two other times I’ve called 911 were for legitimate reasons. Sixteen years ago, my wife and I were enjoying a quiet Sunday dinner in our apartment. At one point, I glanced out the window toward the parking lot of the complex and saw orange flames shooting out of the dumpster. The fire was close to some parked cars and not too far from the nearest apartment. Who knew what might have been in that dumpster that could’ve increased the fire’s strength.

I called 911 and explained the problem. I remember being instructed not to try to put the fire out. I was OK with that; my garden hose wasn’t long enough anyway. I stayed on the line until firefighters arrived, and the fire was doused in no time. I never found out what started it but suspect it had something to do with the late-night firework show the day before.

Earlier this year I was observing the activities of the neighbors across the street (my wife said I was spying). The mischievous teenage boy, who was known throughout the neighborhood for his antics, and a questionable-looking friend were conducting what I’ll call a business transaction. It wasn’t the type of business I wanted in my neighborhood.

When I made the call on this shady deal, the dispatcher walked me through some instructions that were unmistakably from the Police Priority Dispatch System (PPDS). I wanted to thank the dispatcher for following the protocols.

Needless to say, the police showed up promptly and had a little chat with the boys and the neighbor boy’s mother. I didn’t see the neighbor’s friend ever again, and the disturbing drug activity seemed to have come to an end.

My examples are relatively minor and tame compared with the calls you take every day. Still, it was comforting to know that a skilled, well-trained dispatcher was addressing my small issues. To think you handle situations like these, and many more that are infinitely more urgent, is humbling.