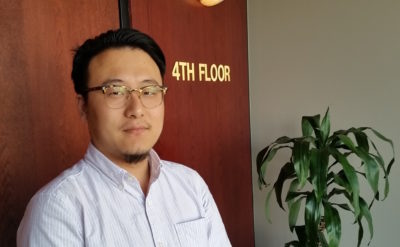 Chaolun “Kim” Gao is an MPDS Consultant and Implementation Specialist contracted with PDC through Beijing-based Anke Electronic Technology—the largest CAD company in China. He was recently at IAED World Headquarters in Salt Lake City, Utah, USA, and we took the opportunity to interview him.

A certified EMD and ED-Q, Gao also certified with ProQA and spent a month working as a dispatcher at an ACE agency as part of his training to get familiarized with the MPDS protocols, PDC software, and understand how dispatchers use both of them. That training, in turn—along with tutelage from Priority Dispatch System (PDS) Program Administrators Ross Rutschman and Ken Hotaling—provided him with the experience and knowledge necessary to assist other agencies in China through the implementation, Go Live and Post Go Live phases of using the protocols.

Gao said an important part of his role involves acting as an advocate and customer service representative for the agencies that he’s worked with to develop a high level of trust.

“If the clients don’t like you, they won’t ask you questions they need to ask,” Gao said. “I always tell them, ‘Any time you have a question or problem, call me.’ Some call me in the middle of the night. But that’s OK; I do it. I’m always there to back them up.”

The beauty of the MPDS protocols, Gao said, is that they really are universal. Even though they were invented in the USA, the protocols work and save lives in China, just as they do throughout the world. And if the successful outcomes of Chinese agencies using the Medical protocols during the last two years are any indication, he thinks stakeholders may soon be looking at the Academy’s sister disciplines.

“I think they will be interested in the FPDS and PPDS,” he said. “It really makes a difference.”

And the efforts of Gao and Academy representatives in ‘the Middle Kingdom’ haven’t gone unnoticed. To date, eight agencies in China have attained EMD ACE status beginning in 2014.

Gao is based out of Xi’an, China, population 8 million, and in his free time enjoys playing blues music on electric guitar and harmonica, and enjoying western food, such as pizza and tacos.