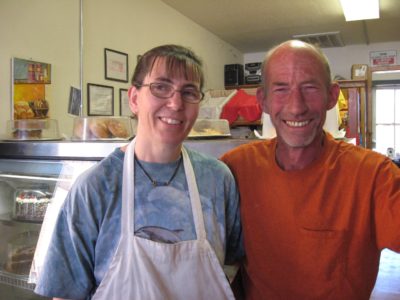 Oct. 21, 2015, was gearing up to be just another day for Ralf and Gurtrude Wuellner, until an event made it a day they will never forget.

The Wuellners own and operate the Gold Camp Bakery in Victor, Colo., USA, a city at a 9,700-foot elevation near Pikes Peak. Every morning for the past eight years they’ve unlocked the shop’s doors before dawn to bake pastries, rich in natural ingredients and German culture.

“You have to get there early if you want a Bee Sting (cake),” said 80-year-old Theresa “Tarie” Huber, who has spent the majority of her life in the once-bustling gold mining capital of Colorado. “It’s that good.”

Huber stops at the bakery for a slice of the sweetened buttery pastry on her way to a part-time job at the visitors center. It’s not unusual to skip a week between Bee Stings, but on this particular Friday in 2015, Huber heard something that made her come running.

Ralf had suffered sudden cardiac arrest. Gurtrude found him facedown on the floor, unresponsive and his skin turning blue. She called 911.

EMD Cindy Link, at Teller County Sheriff’s Department 911 center in Divide, started CPR immediately, giving instructions to Seanna Forte, a bakery employee, who relayed them to Gurtrude. For the next 18 minutes, until firefighters arrived from Cripple Creek, Link counted, Forte repeated the counting, and Gurtrude pumped her husband’s chest.

“Cindy told me I was going to do CPR, and so that’s what I did,” Gurtrude said. “I didn’t think about whether I could do this because I knew I had to do this. There was no choice.”

Cripple Creek is 49 miles southwest of Colorado Springs, with about half of these miles along Highway 24 at its junction with Highway 67 at the city of Divide. Victor is another seven miles south of Cripple Creek.

Teller County 911 takes calls within the county and transfers EMD dispatch to Cripple Creek 911. A call involving a heart-related condition is generally routed to helicopter dispatch from Memorial Hospital Central in Colorado Springs.

“Chest pain and there’s a good chance the patient will be flown out,” said Diann Pritchard, Cripple Creek Police Department Dispatch Supervisor. “There’s only one main road that takes you down Ute Pass to Colorado Springs, so once you get started by ambulance you’re stuck.”

On a good day, the drive along Highway 24 to Highway 67, between Victor and Colorado Springs, takes 90 minutes; a helicopter reduces travel to an estimated 12 minutes.

Heavy snow and reduced visibility prevented medical helicopter service. Snow and ice glazing the single road like honey on a Bee Sting delayed ambulance response. Once Paramedic Eric Murray arrived, it took seven tries with an AED to get back Ralf’s pulse.

Ralf assumes it wasn’t easy navigating the twisty, slushy, and slippery Highway 24, but he couldn’t say. The last thing he remembers is feeling queasy at the start of his day and taking the aspirin his son retrieved from the nearby convenience store and post office.

Gurtrude, however, does remember her anxiety intensified by bad weather. Nine inches of snow had accumulated in Cripple Creek by 9 a.m.

Halfway down the road to Colorado Springs in a four-wheel drive ambulance, Ralf came to. Five days later, he was back at the bakery, with two stents in place..

“His heart is doing great,” Gurtrude said. “It does what it needs to do.”

“I am very proud of what we do,” said Link, manager at Teller County 911. “I like being able to help people, and I like the pace. It feels like I’m where I’m supposed to be.”